Tuesday is Equal Pay Day, one of the rare days on the calendar when data takes center stage. Even the timing is based on an annual calculation: Equal Pay Day marks the number of additional days women must work to catch up with men’s pay for the previous year. So, in 2014 women apparently needed to work an extra 98 days (i.e. from Jan 1 to April 8) to earn the same amount that men did in 2013. To mark Equal Pay Day, we’re answering readers’ questions about the gender pay gap.

The White House has said, “on average, full-time working women earn just 77 cents for every dollar a man earns.” That 77-cent figure has been used by President Obama again and again and again. Perhaps because it has become so ubiquitous, some readers were keen for us to check it.

@DataLab538 How accurate is the "women make 77% of what men make" actually?

The figure is consistent with U.S. Census Bureau data, and it appears solid. But the long title of the graph (on page 11) — “Female-to-Male Earnings Ratio and Median Earnings of Full-Time, Year-Round Workers 15 Years and Older by Sex: 1960 to 2012” — is a clue: The figure misses a lot of nuance. It doesn’t include part-time and seasonal workers and children under 15, but lumps together everyone else, regardless of their age, occupation, industry, education or how many hours they work (as long as they’re full-time).

Those are crucial distinctions because they explain at least part of the gender pay gap. Men tend to work more hours, they’re less likely to take time out of their careers to raise children, they’re overrepresented in better-paying industries, and they tend to hold more senior positions within those industries. The 77-cents-on-the-dollar figure doesn’t account for any of that.

It also doesn’t explain it. Do women go into lower-paying sectors because they prefer them, or because employers discriminate against them? Do women stay home with the kids because of cultural norms, or because of the way parental leave policies are set up? Lots of research has looked into these questions, but the 77-cents figure doesn’t address them.

Other readers were curious about how the pay gap differs among states.

The National Women’s Law Center has broken down the data on a state-by-state basis. The District of Columbia has the smallest pay gap, which means the median salary for women in full-time work there is 90.1 percent what it is for men.

Some readers were also keen to understand the gender pay gap by industry.

The Bureau of Labor Statistics does have data on this, but for several reasons — including the fact that it’s based on a survey of 144,000 businesses and government agencies — it’s not comparable to the figures we’ve used above. Instead of industries, we can look up specific occupations, using this BLS data.

To get a sense of where women are most likely to be affected, we looked at the pay gap in the 10 most common full-time occupations for women. Those roles conform depressingly well to stereotypes. Of all full-time female workers in America, 4.7 percent are secretaries — the most likely role for any woman in that employment group. And despite the fact that only 0.2 percent of full-time secretaries in America are men, they still take home a median weekly salary of $803 — considerably more than their female counterparts, who earn just $665 per week. 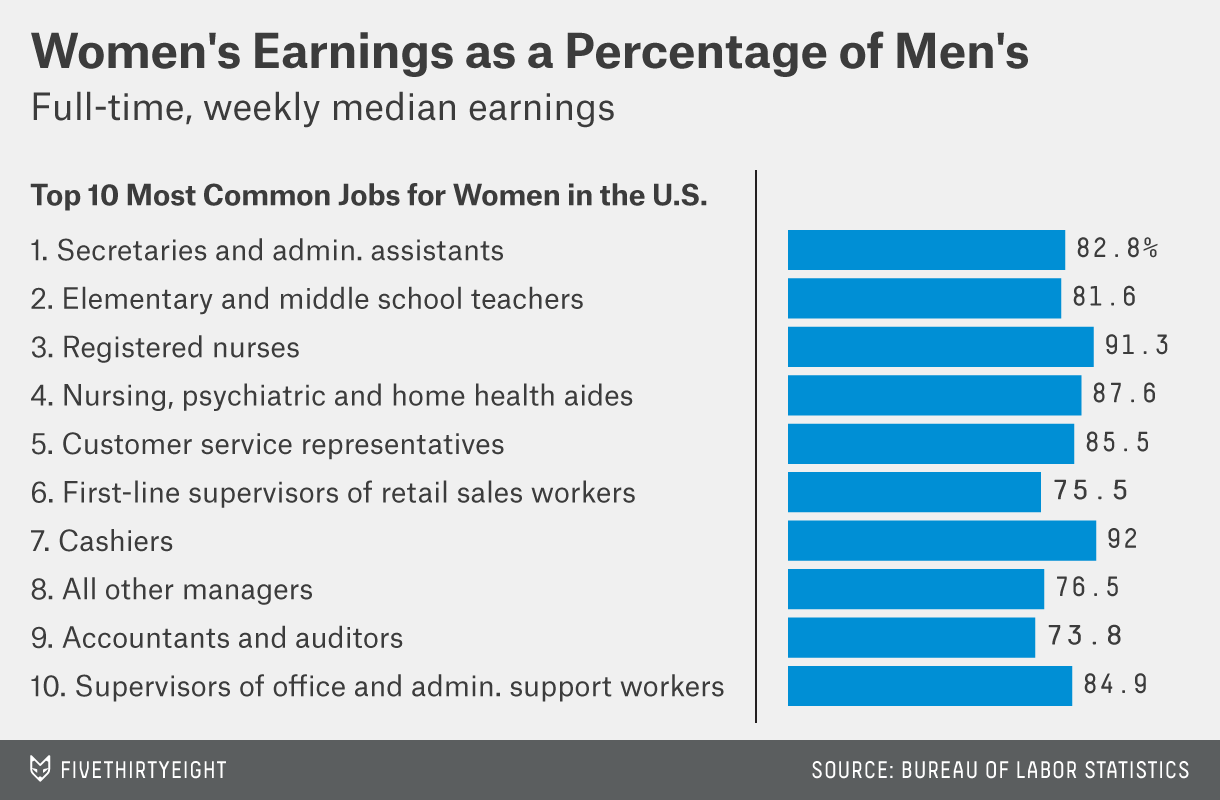 Even when we expand the list to look at the 20 biggest occupations for full-time female workers, in not one do women earn the same median weekly salary as men. Together those 20 occupations represent 42.5 per cent of all women in the U.S. in full-time roles. The narrowest gap we could find was among office clerks, where women earned 98.8 percent of what their male colleagues did. Close, but not equal.