Movies take place in a weird alternate universe where men outnumber women by more than 2-to-1, and where it’s strikingly rare for women to have a real conversation about something other than a man. This imbalance extends to how certain jobs are portrayed in movies, even as bit parts, and reinforces old gender stereotypes.

I recently started diving into the OpusData database, which tracks film releases, box office performance and — most interestingly — screen credits. For instance, you can look up every role since 19951 that was credited as “bartender.” There have been 145 such roles with gender data, and about 85 percent of the time the performer playing that bartender was a man.

I pulled that data for a couple dozen careers, some considered prestigious, others specifically gendered: 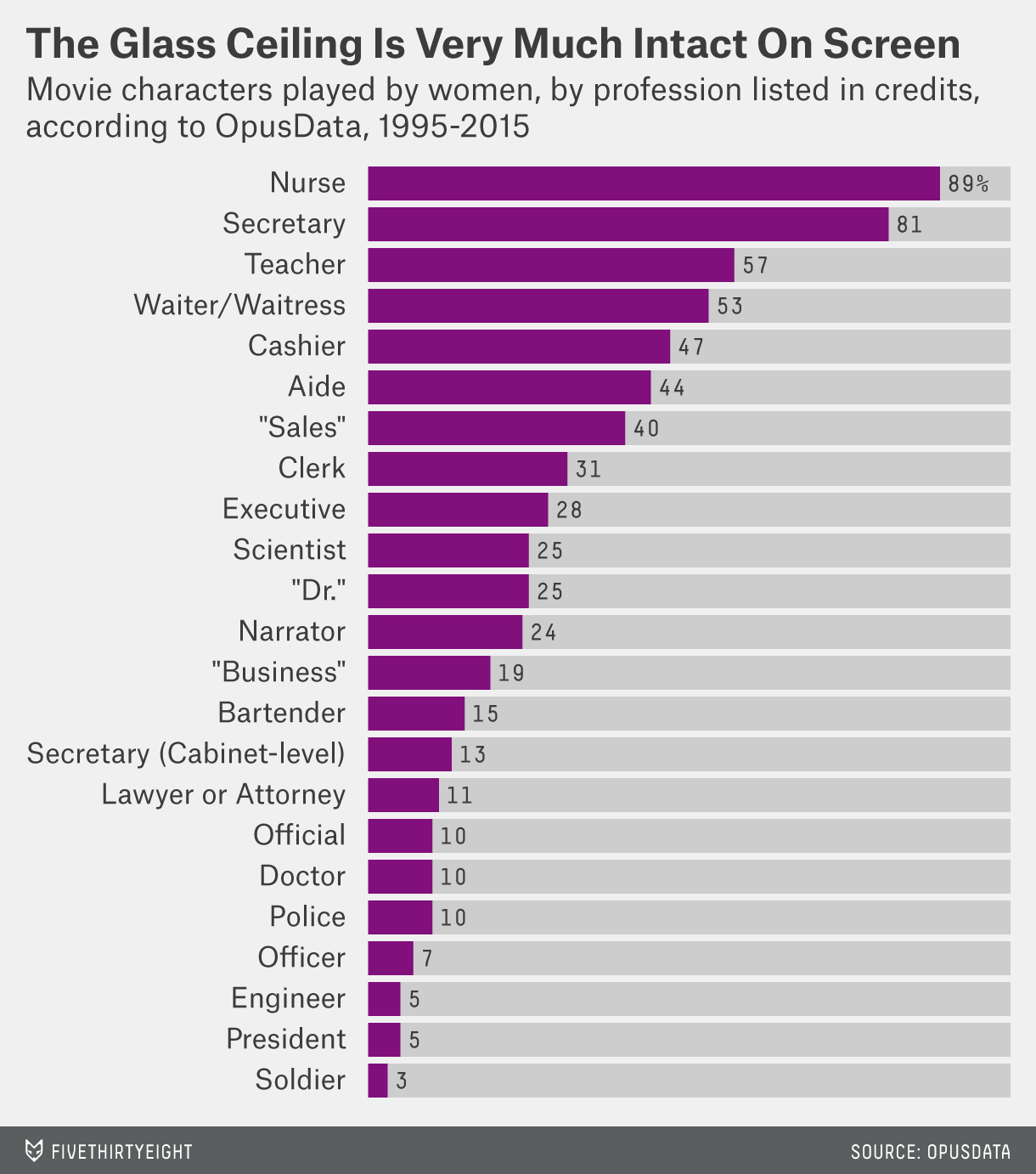 The vast majority of these are supporting roles — the scientist in the background as the protagonist discovers the deadly disease has mutated, the emergency room nurse holding the respirator as our hero is wheeled into surgery on a gurney, and so on. But they represent Hollywood’s background, the fabric you may take for granted but that can strongly influence perceptions about gender. If every engineer on screen is a dude, that sends a message about who can be an an engineer.

Even in fields with a large gender gap in real life, what we see on-screen is even worse. Yeah, medicine and law skew male, but not as much as in the movies. In 2005, 30 percent of lawyers were women, but in this data set, only 11 percent of lawyers or attorneys were played by women. And according to the Kaiser Family Foundation, about 32 percent of doctors were women in September 2014, but on screen, only 10 percent were women.

I did clean the data a little bit; specifically, in the “president” category I removed college presidents, aides to presidents, vice presidents and non-U.S. presidents. I kept sci-fi presidents (Presidents Alma Coin and Coriolanus Snow in the Hunger Games franchise, for instance) that were based on an alternate-universe U.S.

This list isn’t totally complete — we included, for instance, President Thomas J. Whitmore from “Independence Day,” but we would have missed him had he been credited only as “Thomas Whitmore.”

If there’s a president on screen, he’s probably a guy. The only women in the data set were Julianne Moore as President Coin in “The Hunger Games: Mockingjay — Part 1,” Amy Aquino in the forthcoming film “The Lazarus Effect,” and Stephanie Paul hamming it up as a faux Sarah Palin in the (fantastic) comedy “Iron Sky.”

The most interesting information to me was what turned up when I searched for characters whose names contained “Dr.” On screen, the prefix “Dr.” is usually just there to indicate that this character is the smart person in the five-man band and at some point the brawny lead will probably tell them to explain something again, “In English, please?” It’s kind of disappointing that only 1 in 4 Dr.’s on screen since 1995 were women, right?

If this looks bleak, don’t worry, it gets worse! This was, all things considered, a pretty casual look. But the Media Diversity and Social Change Initiative at the University of Southern California Annenberg took a closer look at 129 top-grossing family films — you know, the kind aimed at impressionable children — released between 2006 and 2011.

They found that female characters accounted for only 3.4 percent of characters in the C-suite — that is, top-level business executives — 4.5 percent of high-level politicians, and 0 percent of developers, investors and editors-in-chief.

Last week, my colleague Nate Silver spoke to Sheryl Sandberg about her new initiative, Lean In Together, and speaking on women in Hollywood, Sandberg said:

“The data on gender equality in every industry is horrible. It’s bad in Hollywood, and it’s bad in my own industry, technology, as well. Women became 50 percent of college graduates in this country in 1981. That’s decades ago — that’s plenty of time for women to get to the top in the same numbers as men. It hasn’t happened.”

So why is that? She continued:

The data appears to bear this out. When it comes to caregivers, male nurses on screen are as rare as female lawyers. And as for leaders, only 10 percent of officials and 28 percent of executives are women on the big screen. Seems like she’s got a point.