“Saturday Night Live” turns 40 this year, and there’s a big celebration planned for tonight’s show. Besides its iconic sketches, the NBC program is renowned for being a launching pad for comedians onto the big screen. (Be sure to check out Grantland’s piece on the cultural impact of “SNL” for a much deeper discussion of this.)

There are two chief ways to judge a movie: how much money it makes and what the critics think. By the first measure, Eddie Murphy, by a mile, has been the most successful “SNL” alumni. By the second, I say it’s Christopher Guest, though that’s debatable.

But we can have a lot more fun with this.

I pulled the list of “Saturday Night Live” repertory and featured players, and grabbed their box-office histories from Opus Data. But I also got, when available, data about their role — lead, lead ensemble, supporting or cameo. Then, when available, I got the Rotten Tomatoes Tomatometer score for all those films.1

Films that had at least one “SNL” alumnus have made an aggregate $88.3 billion, or $114.8 billion when you adjust for inflation to 2014 dollars. That’s a pile of money.

When you only look at films where an SNL alumnus had a lead role — or was part of the lead ensemble — there’s still a mighty pile of cash. There are 294 such movies in the set, and they’ve made $37.9 billion adjusted for inflation. The average film with an “SNL” alumnus in the lead made $143 million.

Granted, a lot of that haul comes from a small group of people. Check out the most successful lead performers: 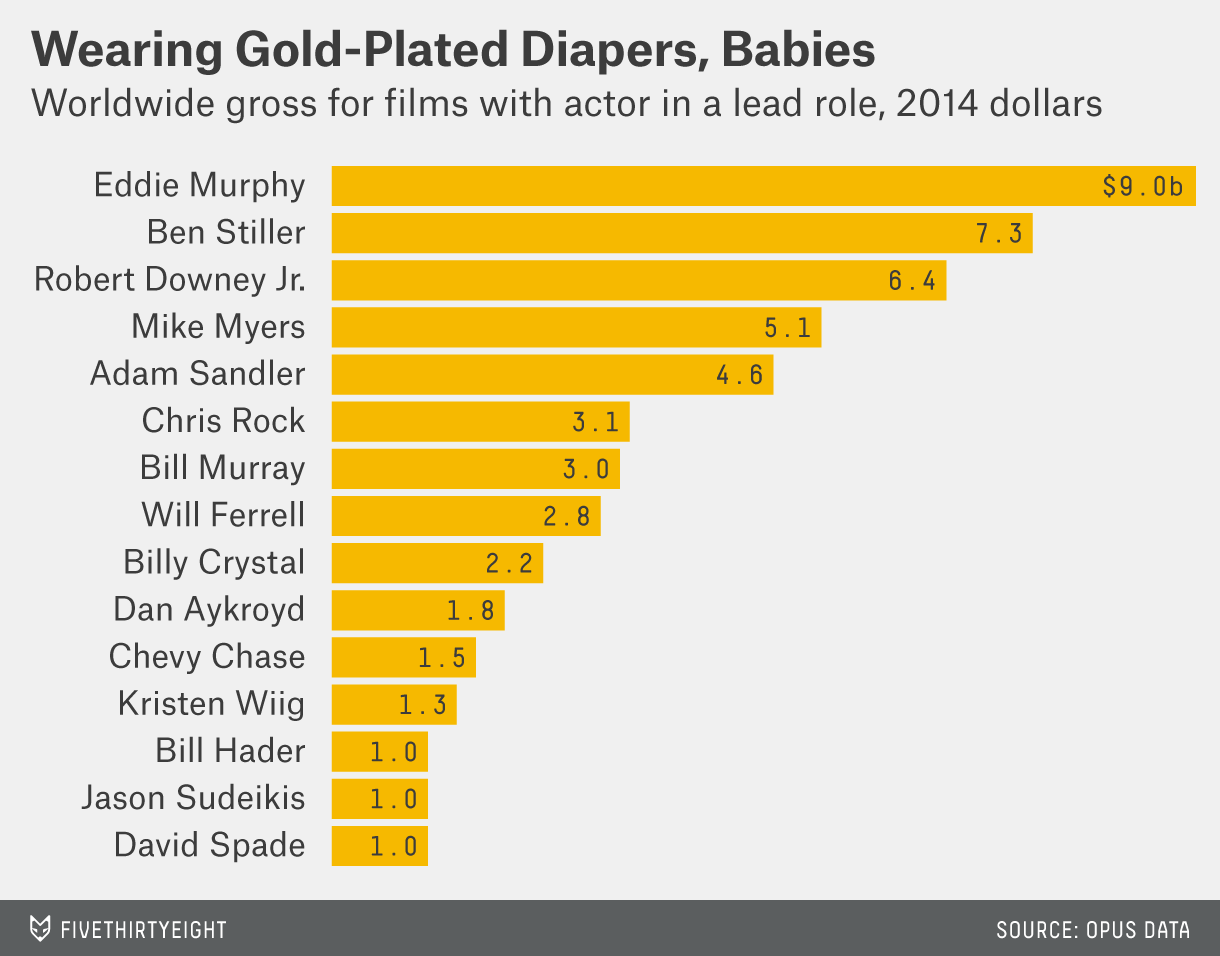 Murphy has appeared in the most lead roles (35), which goes a long way to explain his dominance. His career as a whole is worth an extended analysis of its own — he joined the “SNL” cast when he was 19 and has been a cultural tour de force ever since. He’s seen critical highs (“48 Hrs.”) and abysmal lows (“A Thousand Words”), as well as box-office juggernauts (All the “Shrek” movies) and also, well, “The Adventures of Pluto Nash.” Basically, the platonic ideal of an “SNL” alumnus.

Although the “SNL” casts have several box-office juggernauts, they’re hardly critical darlings. The show is responsible for some damn awful movies. For every “Ghostbusters,” there’s a Rob Schneider-led abomination. According to Rotten Tomatoes scores, some alumni have a good track record, but others don’t. Here are the best and the worst (treating all roles equally): 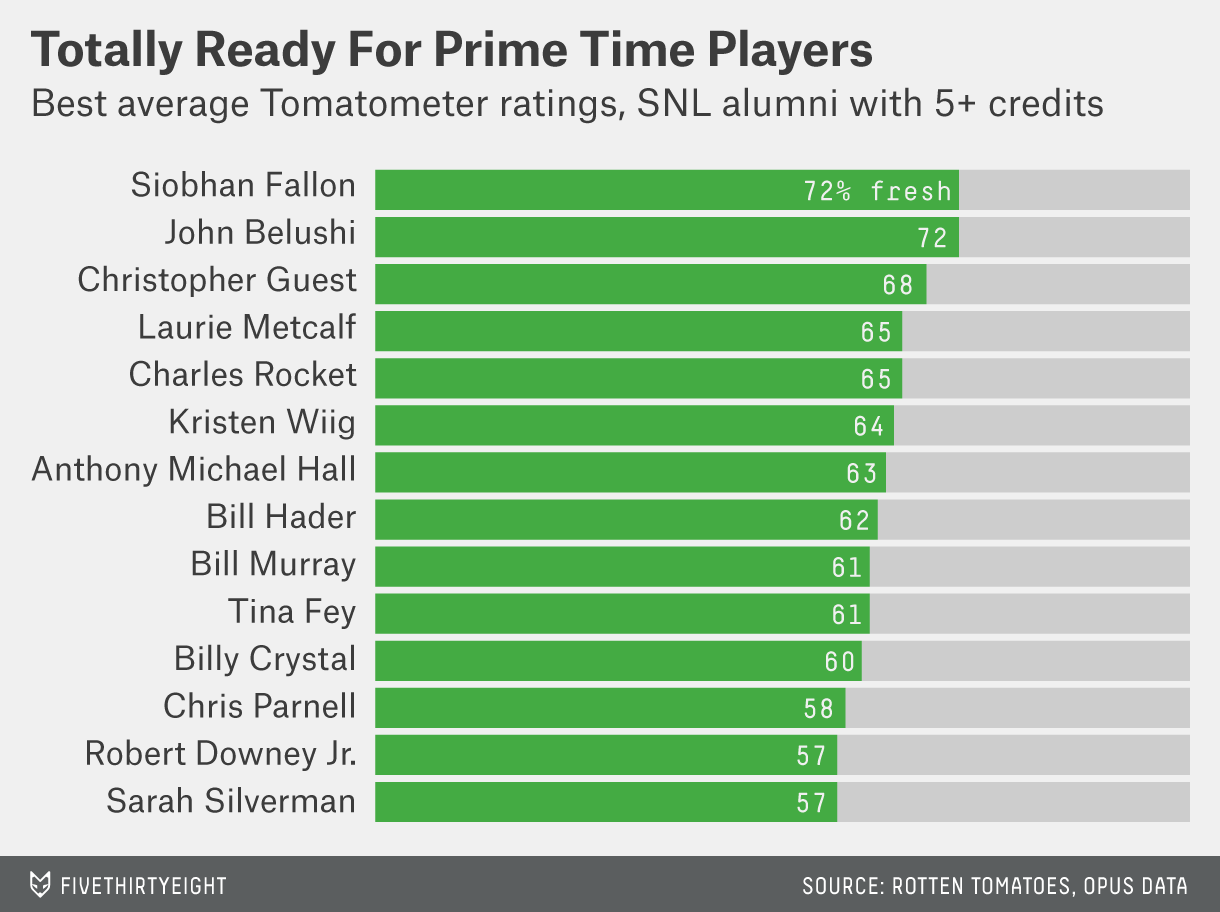 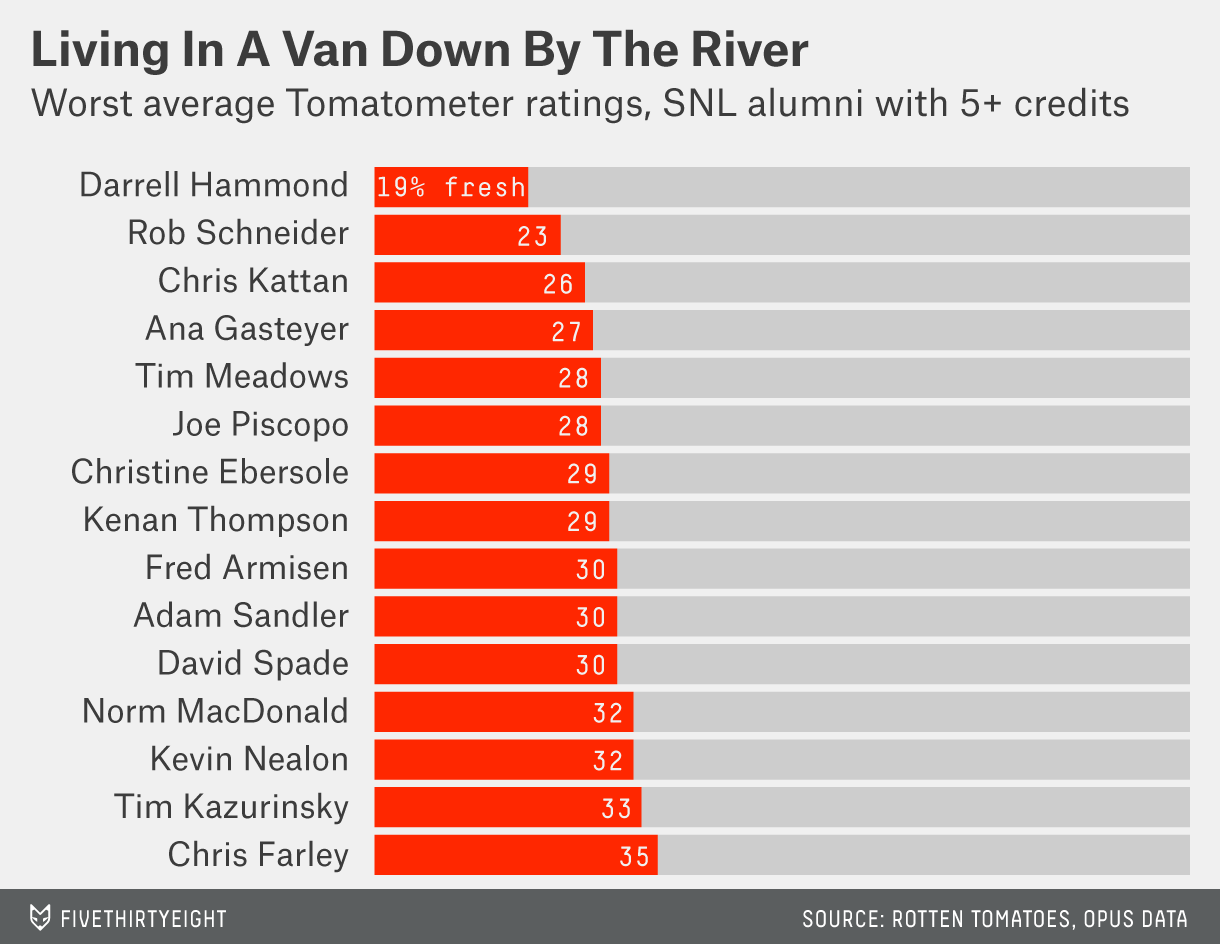 But treating every performance equally is suspect. How about the best lead actors? 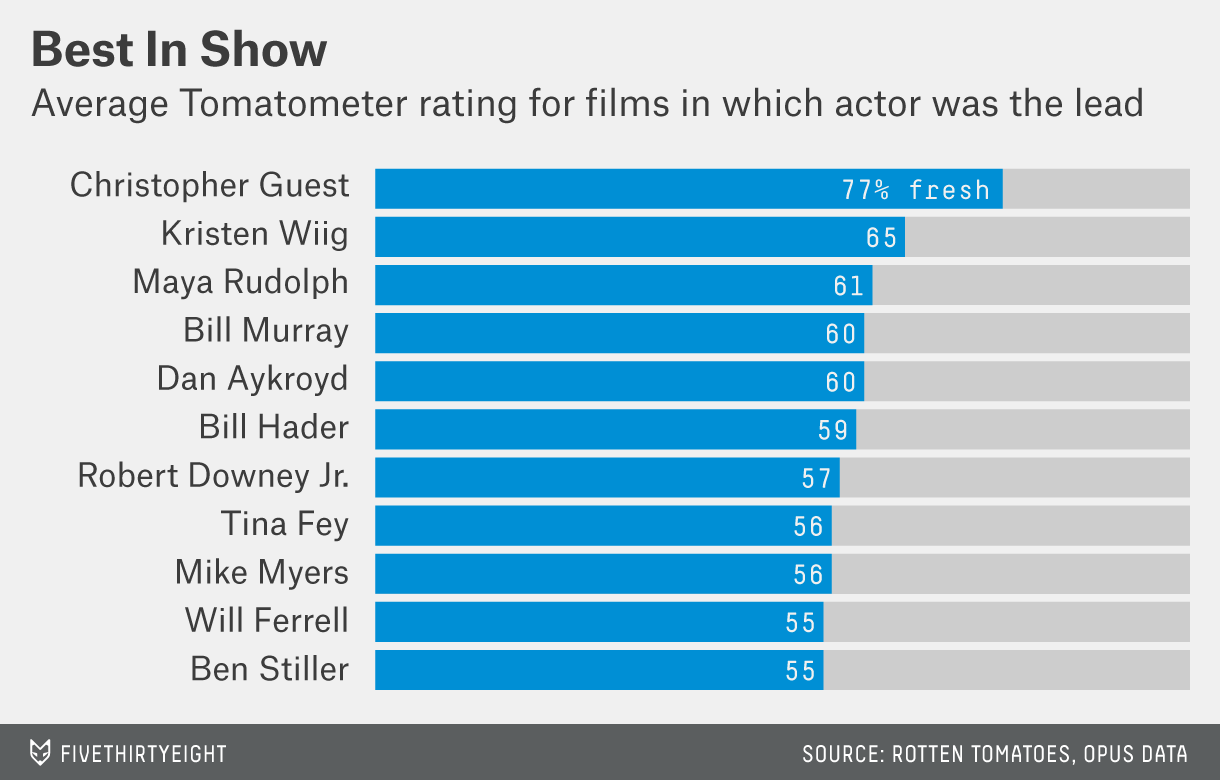 Guest comes out on top here. Indeed, two films he starred in made the top-reviewed films in the set, the rad “This Is Spinal Tap” and “Best in Show.” And lot of “SNL” alumni have gone on to star in some really good movies. Here are the top 10 best-reviewed films with a former “SNL” player in the lead:

Murray is the king of showing up in random places, appearing five times in small cameos, according to Opus Data credits.

A lot of “SNL” alumni continued to work with one another long after they hit the big screen. On balance, this has been a bad thing! Sandler is by far the most consistent when it comes to working with other folks. Schneider and Sandler are the most frequent collaborators in the set, appearing together in 12 affronts to cinematic decency. Showing up to a Sandler set and shouting, “You can do it!” has paid that man’s rent for years. Sandler also worked with Kevin Nealon eight times and David Spade six times. Besides the usual Happy Madison suspects, there are other regular collaborators: Hader and Kristen Wiig appear together in eight films, Spade and Jon Lovitz in six.

On that note, some films are definitively “SNL” movies — “Coneheads” has a whopping 14 alumni participating, the most in the set. Runners-up include “Little Nicky” (nine almuni), “Dirty Work” (seven) and “Grown Ups 2” (seven), all of which are abysmal.

The verdict? Kind of a mixed bag here, Lorne. There are a lot of greats but also Schneider. But that seems right — “SNL” as a live sketch-comedy show is hit or miss. There’s a ton of talent, but it doesn’t always come together.

Also, I didn’t even look into the impact “SNL” has had on the small screen. To name a few, Tina Fey, Harry Shearer, Amy Poehler, Phil Hartman, Julia Louis-Dreyfus and Chris Parnell found success in scripted television. Jimmy Fallon, too, has taken his skill of being incapable of maintaining a straight face to “The Tonight Show.” Al Franken is in the damn Senate.