This is the first in a regular series called “Dear Mona,” where I’ll help readers to answer a fundamental, burning question: Where do I fit in the world? Or: Am I normal? I’m not a fan of advice columns in which the writer dispenses “you shoulds” based on her experience. Instead, I’ll offer data to contextualize your experience. To kick us off, I asked my colleagues to submit a question, and my editor complied. From here on though, I’ll be answering your questions. (Have one? Send it to DataLab@fivethirtyeight.com.)

There are, in theory, 20,658,722 Americans like you. At least that’s everyone in your age group, 30 to 34, according to the Current Population Survey as of March. But just how like you are they? (If all of them read this article, you’re going to give me a raise right? Right.)

About 75 percent of that group of young adults is living with family, according to the CPS (all the data that follows is from the CPS). Before you feel smug about the fact that you’re not stuck living with Mom and Dad, remember that “living with family” includes individuals who live with spouses and offspring of their own. So you fit into the remaining 22.8 percent. Not so normal.

A further 10.4 percent of people your age live alone. We’re down to 12.4 percent. And 8.4 percent are living with a girlfriend or boyfriend. I’m afraid that means that you’re in the sliver — 4 percent of Americans your age — who live with a roommate.

I talked to Eric Klinenberg, a professor of sociology at New York University, about your atypicalness. Klinenberg, the author of “Going Solo: The Extraordinary Rise and Surprising Appeal of Living Alone,” said in an e-mail:

There’s a stigma around living with roommates in your 30s. Interestingly, our cultural expectations have flipped, and whereas once living alone in your 30s would have been seen as a mark of personal failure now living with a roommate is the real oddity.

If that makes you sad, remember that in a few years time, you could be coming home to a different living arrangement. For 35- to 39-year-olds, the percentage living with a roommate slips to 3.1 percent; for 40- to 44-year-olds, it’s just 2.6 percent. 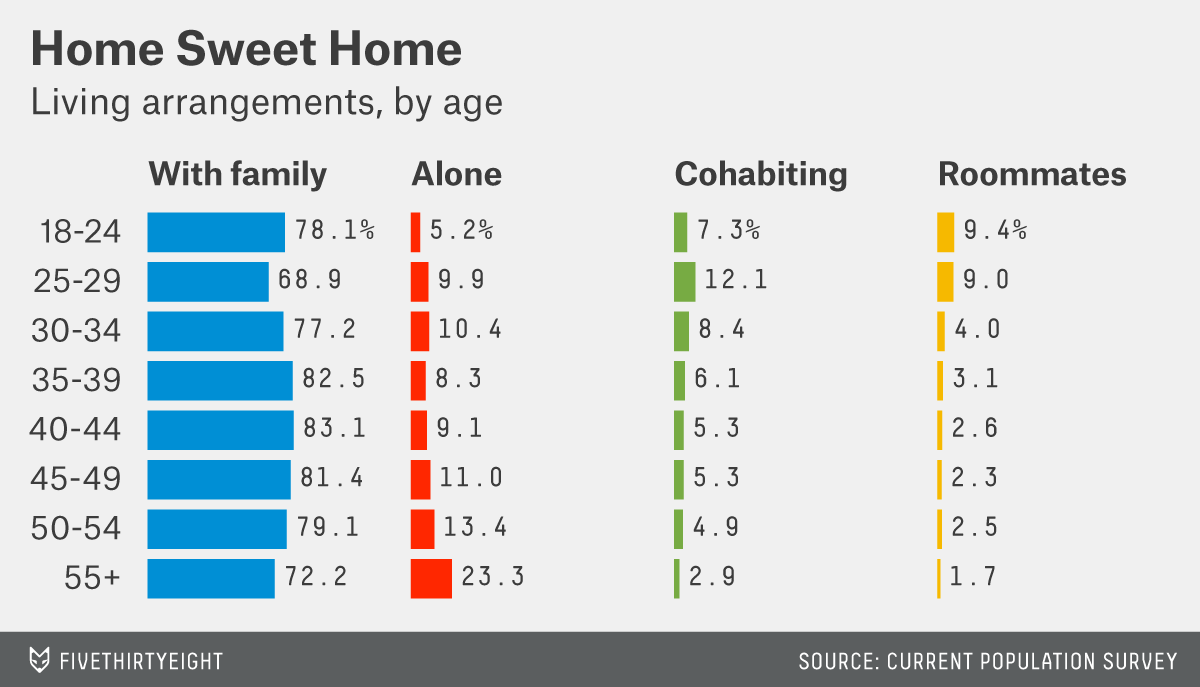 That shrinking percentage doesn’t necessarily represent people moving in with partners; lives rarely move in such a linear way. As people get older, some may move in with roommates after a breakup or because the cost of living alone has become unaffordable. The only thing the data shows is that those movements don’t sufficiently offset each other, and, as a result, older Americans are less likely to live with roommates.

Here’s another nugget of solace: You are a man, and that makes you slightly more normal (statistically at least). Although 4 percent of 30- to 34-year-olds live with a roommate, that percentage rises to 5.7 percent for men and falls to 2.4 percent for women. Readers, you can figure out the rate in your demographic group below: 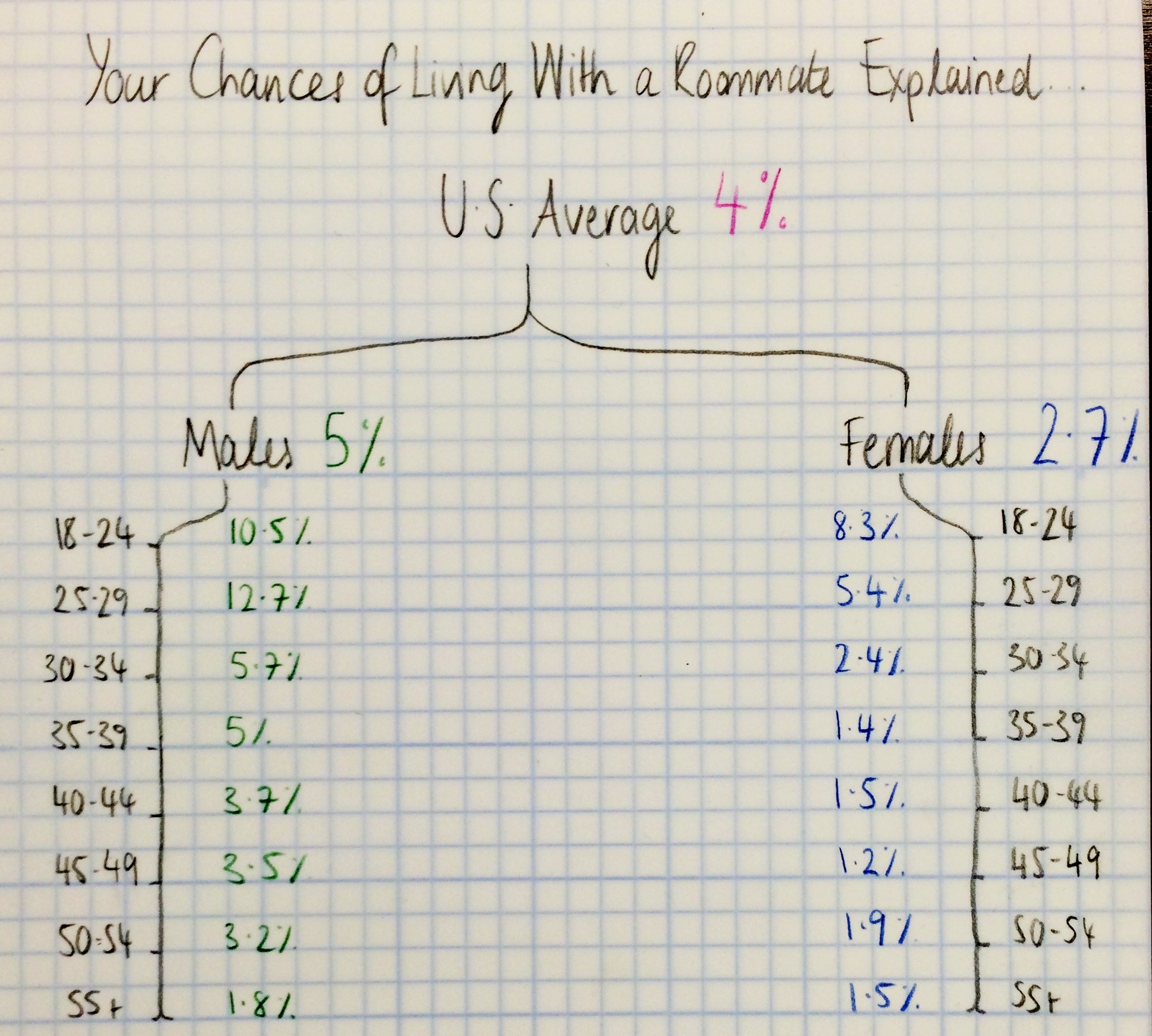 As we’ve written before, America isn’t the only developed country where men and women have different living situations. But there are many reasons for those differences, including education, work and parenthood. In this case, the clearest factor we can point to is in the data. By the time they are age 25 to 29, 40.7 percent of American women are married. Only 29 percent of American men the same age say the same.

Klinenberg thinks there’s more to that male-female gap than just marriage, though:

In recent decades a growing number of women have decided that they are not going to wait for the right man to come around before “growing up,” and so they become an adult by getting a place of their own. When I was working on my book I was surprised to learn that young single women are significantly more likely to buy a home than young single men, who apparently don’t want to commit to anything.

Here’s another thing: You would have been weirder if you were around in the 1970s. Nonfamily households — aka roommates — made up just under 2 percent of U.S. households then, according to the CPS. But that share has risen steadily since, composing just over 6 percent in 2012.

So, Micah, it turns out that living with a roommate at your age is a rarity in America. But taking into account your gender, where you live and your education level, it seems you’re … well, you’re still not normal, but you are a little less abnormal.