This week, the European Union published data that is probably all too familiar to Americans: It showed that increasing numbers of European adults are living with their parents.

Actually, the report, “Social Situation of Young People in Europe,” had a broader focus. It found that young people trust institutions less, and that they’re more likely to perceive ethnic and religious tensions.

But the media — social and traditional alike — focused on the fact that more young people are living back home. Why? Maybe living arrangements are more tangible than the report’s other findings. Living arrangements hit — forgive the pun — closer to home, and they have bigger implications than a faster-emptying fridge. In the wake of the financial crisis, the share of young adults living with their parents has increased in Europe and the U.S. (My colleague Ben Casselman has a DataLab post on a new report showing just how difficult the economy is for 20-somethings.)

Just which young adults are most likely to be living with their folks? When I compared the European and American data, I was struck by a key parallel in terms of who was more likely to live with Mom and/or Dad: men.

Among U.S. adults age 18 to 24, 40 percent of men and 32 percent of women were living with parents in 2012, according to the Pew Research Center. That’s a historic high. At no time since the Census Bureau first started collecting this data in 1960 has the share of young men living at home been so high or the gap between men and women residing there been so wide.

Among Europeans in the same age group, 67 percent of men and 58 percent of women were living with their parents in 2011, according to the European report. To find out whether there were any places where women were more likely to be living with their parents, we took apart the E.U. averages. (For Europe, data was available by country for ages 20 to 24.) 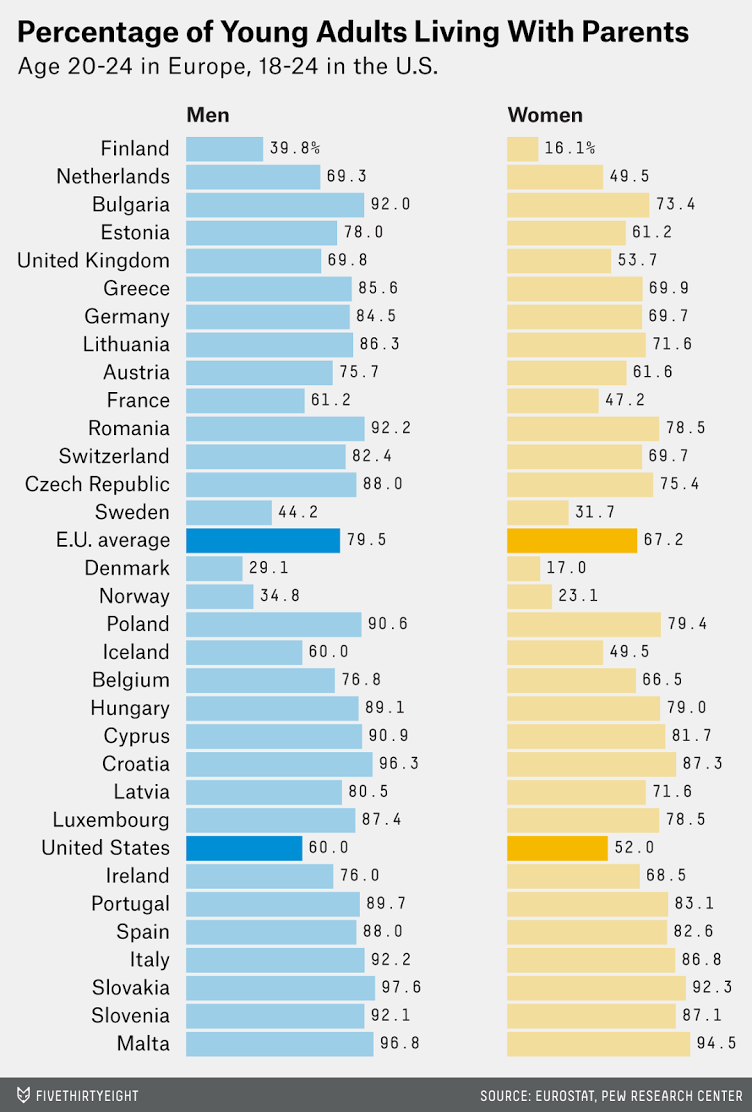 Hang on. Finland? Isn’t it one of the world’s best countries for gender equality? Yes, Finland ranked second in the World Economic Forum’s Global Gender Gap Index 2013. Before you ask, we pulled up the gender rankings for the countries in the chart above and, no, there isn’t a correlation between women’s equality and more men staying at home.

So, what factors might explain the fact that in so many developed countries, young men are more likely to be living with their parents? Here are some contenders:

Those are just a few possibilities. Tell us what you think is driving the gap between men and women living with their parents.