When my kids first left home, one of the things I enjoyed most was that I didn’t have to make any more school lunches. But today, in my home just as in millions of others, my 21- and 24-year-old kids are back, and I’m making lunches again. This is a big change from what I had expected my life to look like when my kids became young adults. Like many women of my generation, I invested a lot of time in parenting my children, with the unspoken assumption that they would enjoy the same independence and economic prosperity that I did as an adult. I expected that when they were in their 20s, I would be dining out, dropping off laundry at the dry cleaners and spending quiet weekends with my husband.

A record number of young adult children are living at home with their parents. In the U.S., 21.6 million young adults were living at home in 2012, according to a Pew Research Center analysis of U.S. census data. That’s 36 percent of all 18- to 31-year-olds, representing the highest rate since 1969, the first year that comparable data was available. This recently increasing trend began at the onset of the most recent recession in 2007. So I wondered: Is this affecting how parents are spending their time, the way it has affected me? And are women affected differently than men?

It turns out it’s not just me. According to an analysis of data from the American Time Use Survey,1 which asks a nationally representative sample of people to record how they spend their time every day, parents with 18- to 31-year-old children living at home are spending at least eight hours per week caring for them. That’s causing real shifts in the time they spend relaxing. (Their sex lives are also being affected.) And women are spending significantly more time taking care of these young adult children than men are.

It’s not news that women do more work around the house than men, or that women have less leisure time than men. What’s new is that the period of care is getting longer, even if it’s mitigated by the increased responsibility and independence of these adult children.

Using the survey data, I analyzed how adults between the age of 31 and 64 spend their time.2 In order to compare time use across different types of households, I looked at households with young children (under 18 only), households with young adult children (between 18 and 31) and households without children. I excluded households with children under and over 18 from my analysis because it’s not possible to separate how parents spend their time in relation to their different children. We also can’t determine whether childless households are comprised of parents of children who have left the home, or of people who never had children in the first place. To help resolve this, I compared weekly time use estimated for a typical 46-year-old adult, since that’s the average age of a parent who is equally likely to have a child under 18 or a young adult child. 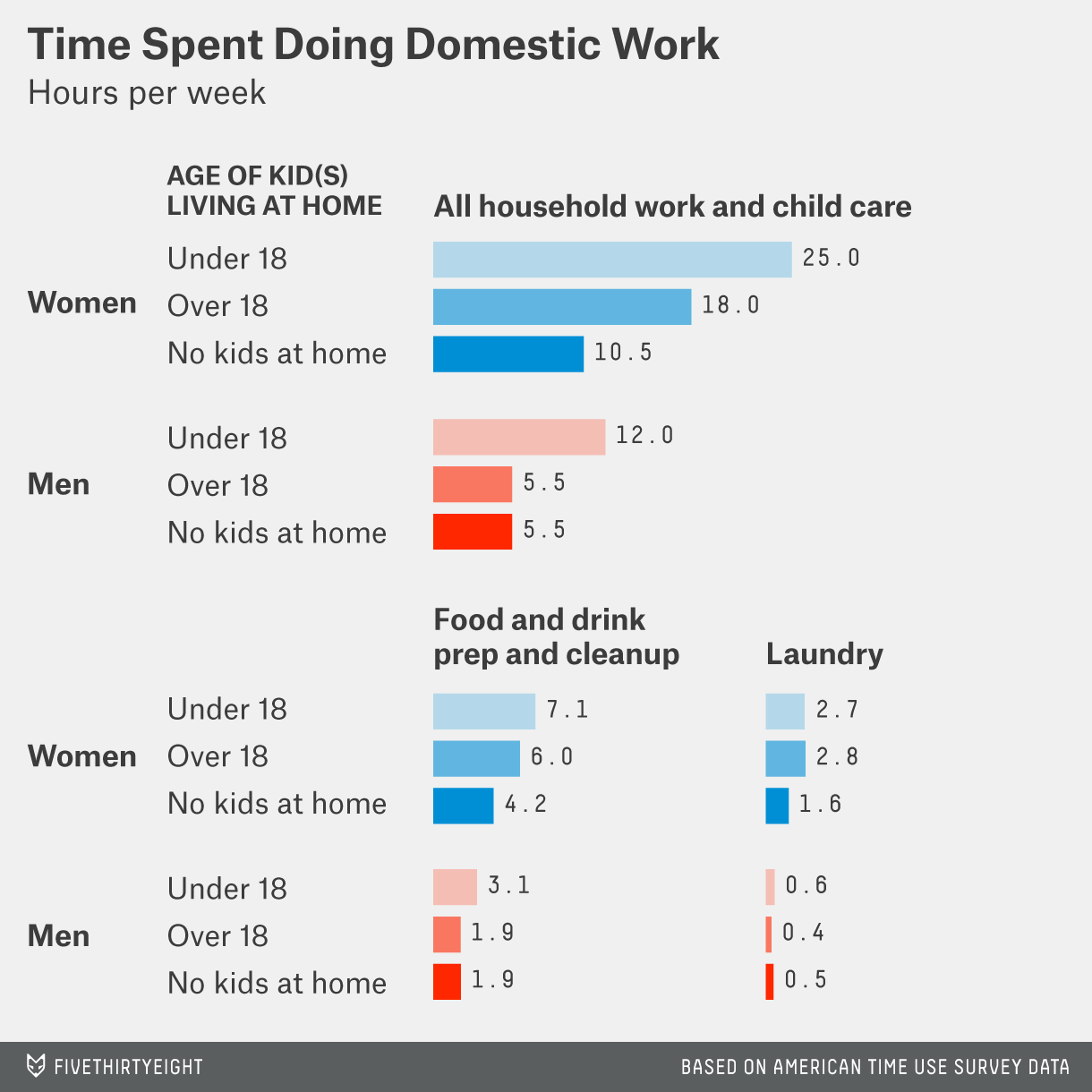 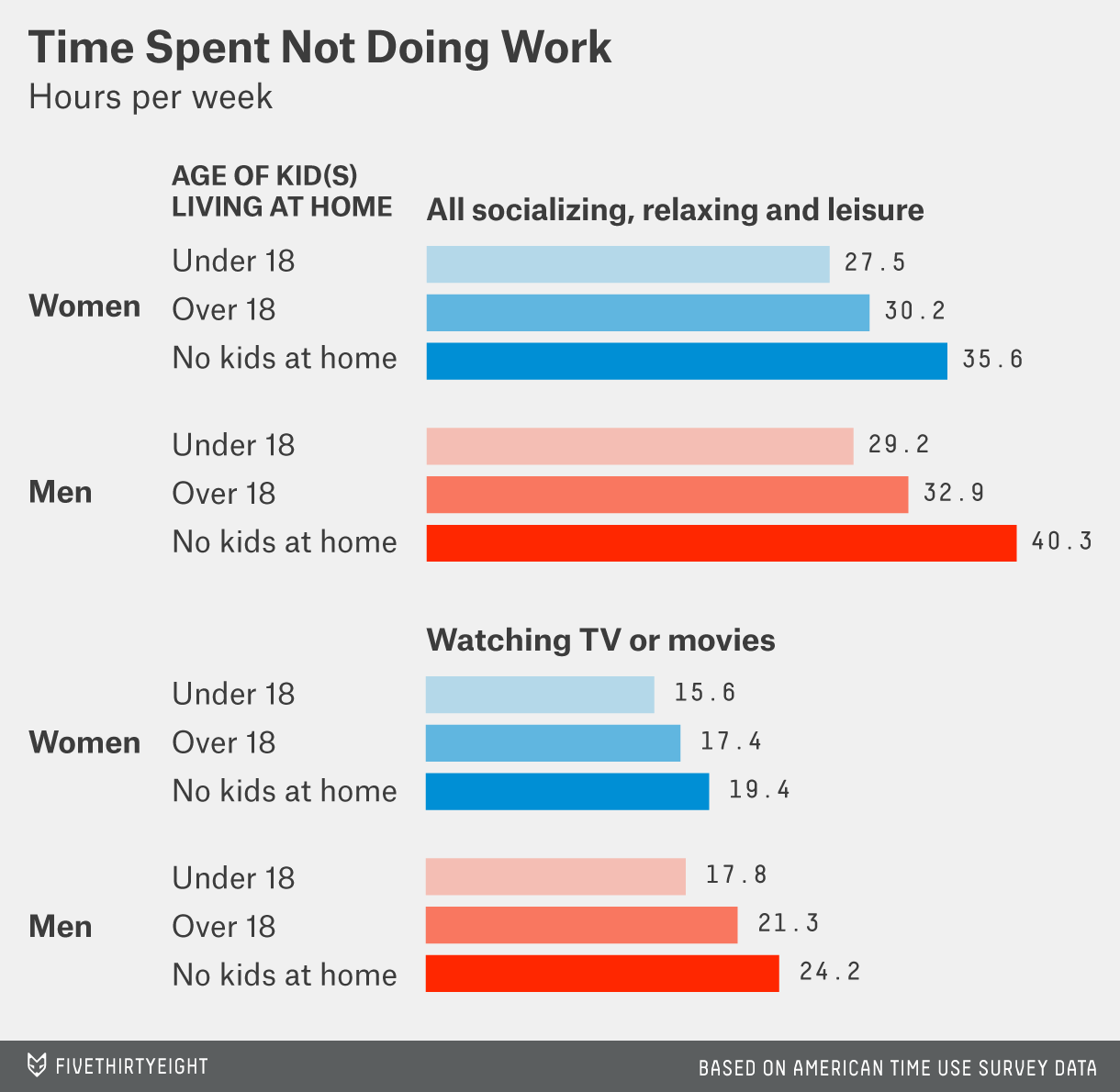 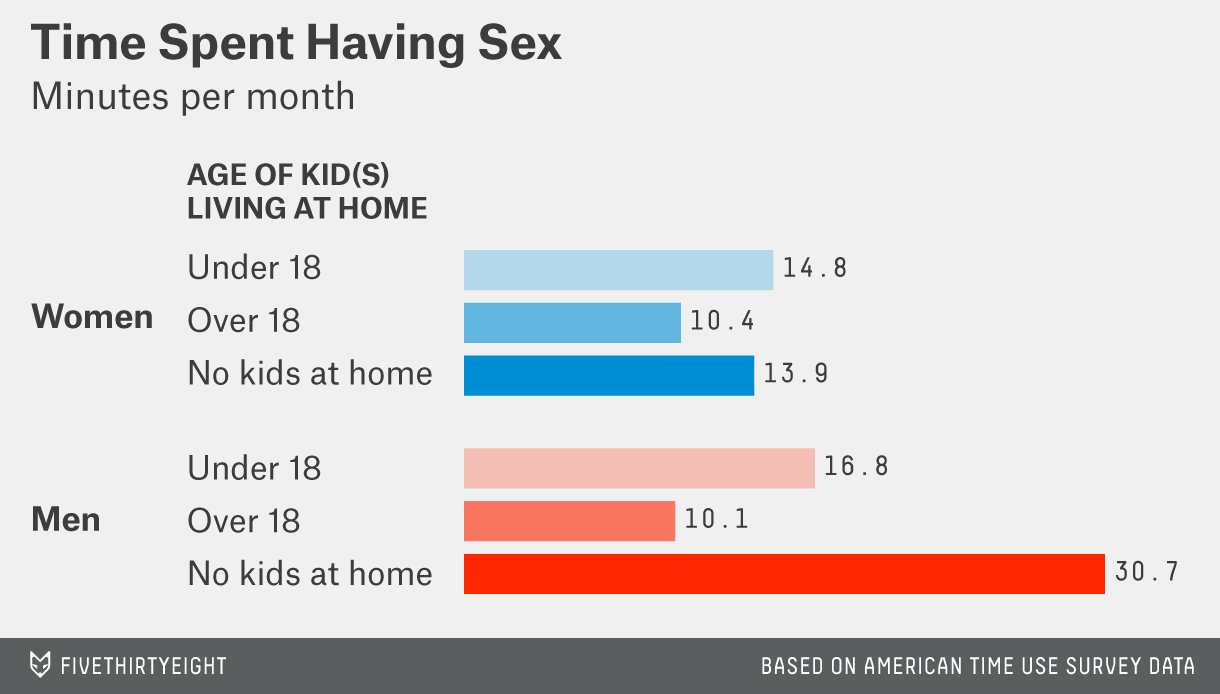 Perhaps all this indicates Americans are drifting towards the lifestyles of past generations. The percentage of young adults living at home, which is considered today to be a striking increase, is still low compared to historical data. For most of the U.S.’s history, the multigenerational household was the norm. In 1880 for instance, 68 percent of unmarried young adult women and 59 percent of unmarried young adult men lived at home with their parents.5 By 1950, fewer unmarried women (65 percent) but more unmarried men (66 percent) lived with their parents. Twenty years later, rates for both women and men dropped to 50 percent and 52 percent, respectively. These numbers are not directly comparable with the more recent data, which says that 36 percent of 18- to 31-year-olds live with their parents. This historical data only covers U.S. born, never-married people between the ages of 20 and 29. Even so, these numbers show a general trend: that as the U.S. modernized and grew economically, a growing number of people left their childhood homes to start their own.

The numbers make it clear to me that I am not the only mom spending time in her mid-40s differently than she had expected. My young adult children are back home, and I’m doing more laundry, grocery shopping, cooking and much less relaxing on the patio with a drink, while my partner is pretty much doing the same thing he did when the kids were out of the house. But I don’t mind making the lunches this time around — arugula salads are way more fun than trying to hide a vegetable stick or two inside a peanut butter roll-up.