So far, college football’s selection weekend has been anticlimactic. Alabama’s wire-to-wire win against Missouri in the SEC Championship will assure it a place in the college football playoff. It will be joined by Oregon, which thrashed Arizona on Friday, and very likely by TCU, which won earlier on Saturday.

The Crimson Tide will presumably also retain their No. 1 ranking and enter as the top seed. Oregon’s win was impressive also — and came against a slightly better opponent. But the committee would have to make some awfully fine distinctions to promote the Ducks ahead of an Alabama team that also won persuasively. The FiveThirtyEight college football playoff model gives Alabama a 98 percent chance of keeping the top position. Here are the latest odds: 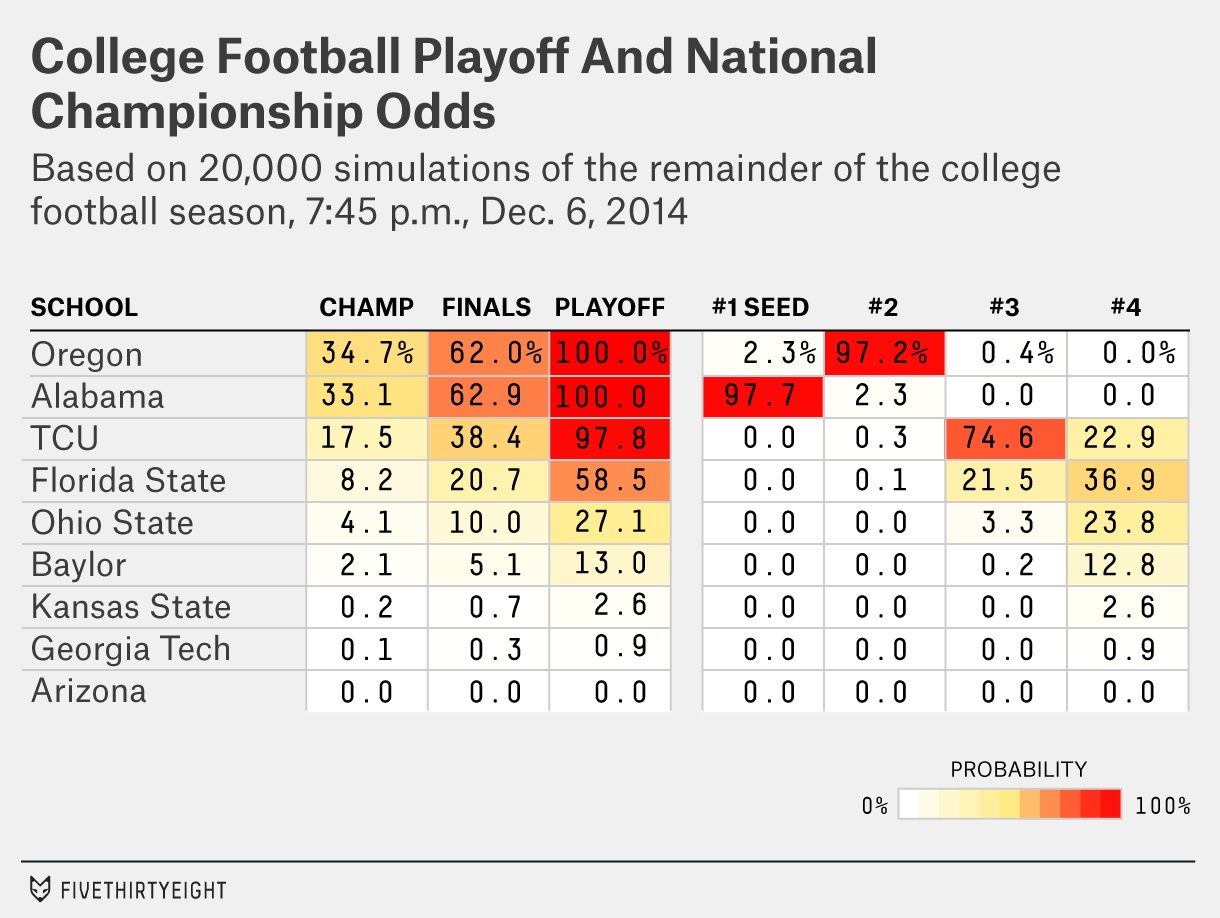 Unless TCU’s position is more vulnerable than the model assumes, that means there are effectively three teams — Florida State, Ohio State and Baylor — competing for just one open slot.

Florida State, which is undefeated but entered the weekend ranked No. 4 by the committee, is probably in with a win in the ACC Championship against Georgia Tech. True, the committee has twice demoted the Seminoles after they won by less-than-impressive margins, but those came against worse opponents than Georgia Tech.

The scorelines in the Ohio State and Baylor games could matter. If both teams win while Florida State loses, the one that does so more emphatically could get the last slot. And they’ll need to win big in any scenario where they overtake TCU or Florida State in the rankings, at least according to the model.

On the flip side: what if Florida State, Ohio State and Baylor all lose? It’s not impossible; all three are relatively narrow favorites. Florida State would still have just one loss and would probably make the playoff. But Georgia Tech — and Baylor’s opponent, Kansas State — could enter the conversation also. Ohio State’s opponent, Wisconsin, is less likely to do so because it entered the weekend ranked just No. 13.

Alabama and Oregon are now effectively co-favorites to win the national title. The FiveThirtyEight model gives Oregon a 35 percent chance and Alabama a 33 percent chance.