Is the 2016 Democratic primary a sequel of 2008? The Bernie Sanders supporters filling up my email inbox think so.

Less than 24 hours after I wrote that the Sanders surge had slowed, or even stopped, a poll came out showing Sanders with his first lead in any state (other than his home state of Vermont). That poll stirred a lot of responses (some kind and some not so kind). Here’s a fairly typical comment:

One poll is just one poll; it could be an outlier, or it could signal some shift in the race. We need more data to find out. But we have plenty of data to see a number of problems with comparing Sanders’s rise to President Obama’s toppling of Hillary Clinton in 2008.

There are clear differences between the Sanders and Obama campaigns. Most obvious is that Obama won 82 percent of the black vote in the 2008 primary,1 while Sanders continues to pick up less than 10 percent of black voters’ support. But the two Clinton campaigns have big differences too. The best data we have — polling, endorsements and fundraising — says Clinton is in a much stronger position now than she was at this point in the 2008 cycle.

During the summer of 2007 (June, July and August), Clinton led nationally and in many states, just as she does now. But her share of the Democratic vote in those early polls was significantly smaller than it is now. Here are the polling averages for the U.S. and the 16 states in which at least one poll was taken in both the summer of 2007 and summer of 2015. 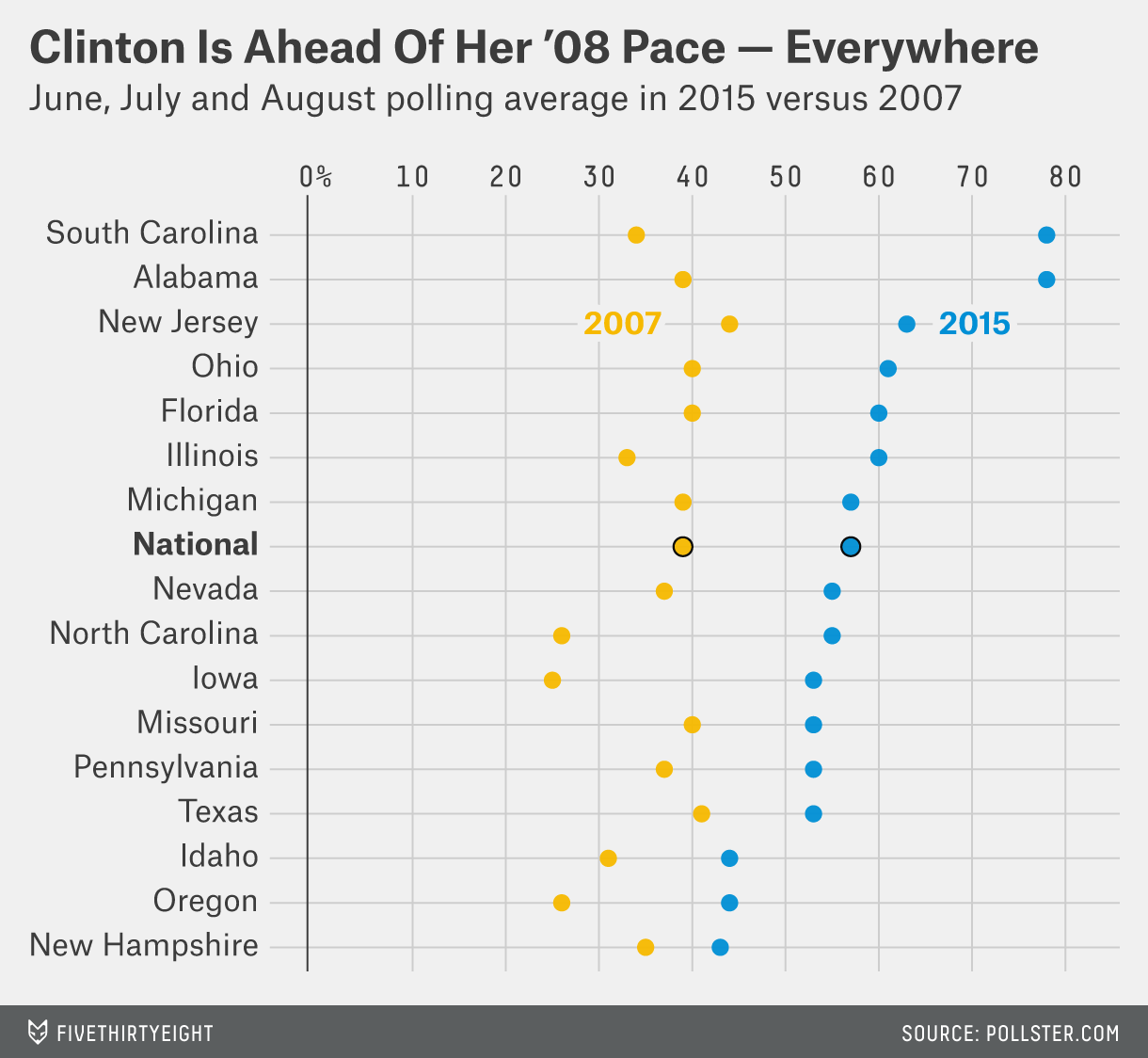 Simply put, Clinton has more support from Democratic primary voters this summer than she did in 2007. Moreover, no one in her polling position has lost a primary in the modern era.

We talk about the endorsement primary a lot at FiveThirtyEight. That’s because no other variable has been as consistently predictive of who becomes the nominee. Obama was trailing Clinton in endorsements in 2007, but he still had plenty of support from governors, House members and senators. Sanders hasn’t yet received a single endorsement from anyone in those groups. 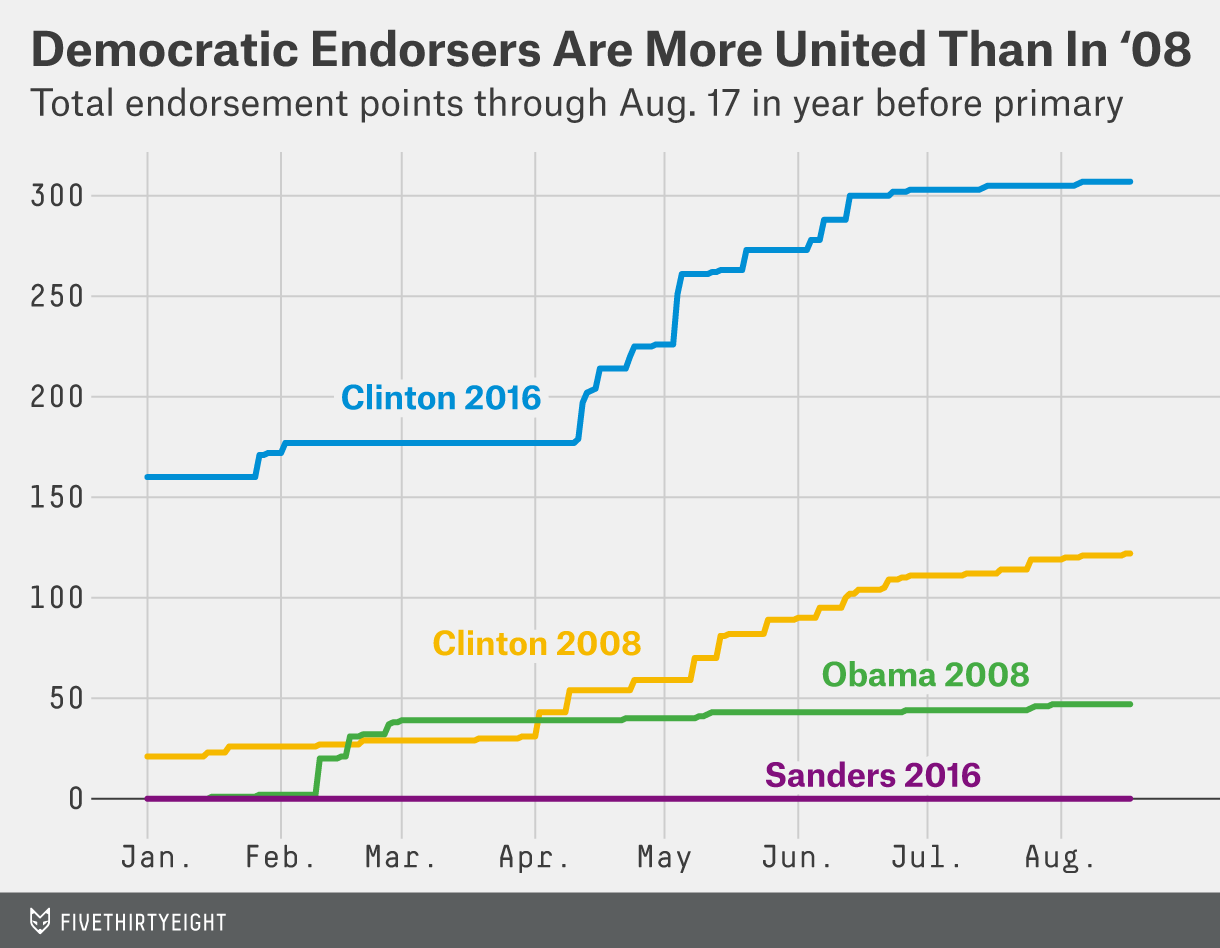 In other words, Clinton has more than twice the support within the party as she did at this point in the 2008 cycle.

Money isn’t nearly as predictive in election outcomes as some would have you believe. Still, Obama’s massive fundraising in 2007 was one of the earliest, clearest signs that Clinton had a fight on her hands. He pulled in 33 percent of the money raised by Democrats through June 2007. That was just behind Clinton’s 35 percent.

Through June of this year, Clinton had raised 73 percent of all money donated to Democratic presidential candidates. Sanders had raised 23 percent. Clinton also has plenty of PAC and super PAC money behind her, and Sanders has chosen not to rely on super PAC support.

Again, money isn’t everything. But compared with the 2008 cycle, Clinton is in a far better relative position for when the primaries turn away from the early contests to larger states in which television advertisements will be paramount.

By pretty much every metric, Clinton is in a stronger position than she was at this point eight years ago. That doesn’t mean she is guaranteed to win, but the 2016 Democratic presidential primary is not the 2008 primary.