At this point in past presidential primary campaigns — about six months before any voting is scheduled — it was easy to mostly ignore early polls. This year is different, because the Fox News debate this Thursday is using national polls to sift a top 10 from the 17-strong GOP field.

That’s led to some outcry. Some candidates are upset the network isn’t using state polls, and some political analysts (including yours truly) have argued that national polls aren’t necessarily the best barometer of the primary’s eventual outcome; there’s also, for example, the endorsement primary. One pollster, Marist, has temporarily suspended primary polling “out of concern that public polls are being misused to decide who will be in and who will be excluded.”

Does the use of national polls in an important debate make sense? That’s just one of several big questions about understanding each candidate’s actual chance of winning the nomination. Gov. Scott Walker, for example, currently leads Iowa surveys — how much does that matter? Does Walker’s lead in Iowa mean more than Donald Trump’s short tenure atop national and New Hampshire polls? How about former Gov. Jeb Bush’s barrels of money and Gov. Chris Christie’s early endorsements?

None of these measurements is a perfect predictor, and we don’t have a very large sample size when it comes to open primary elections in the modern era. But that doesn’t mean there’s no signal in these early metrics, and some have been more predictive than others. Here’s a look at these different measurements, and how useful they are likely to be.

National surveys haven’t been great at predicting the results of primary elections. In fact, the candidate leading in a February to July1 polling average2 has become the nominee just seven of 12 times in open primaries since 1980.

We can see below how the early national polls predicted the primary vote percentage for 110 candidates from open (non-incumbent) Democratic and Republican primaries since 1980. There’s a correlation between how candidates do in the early polls and how they do in the final results, but it’s not an overwhelming one. 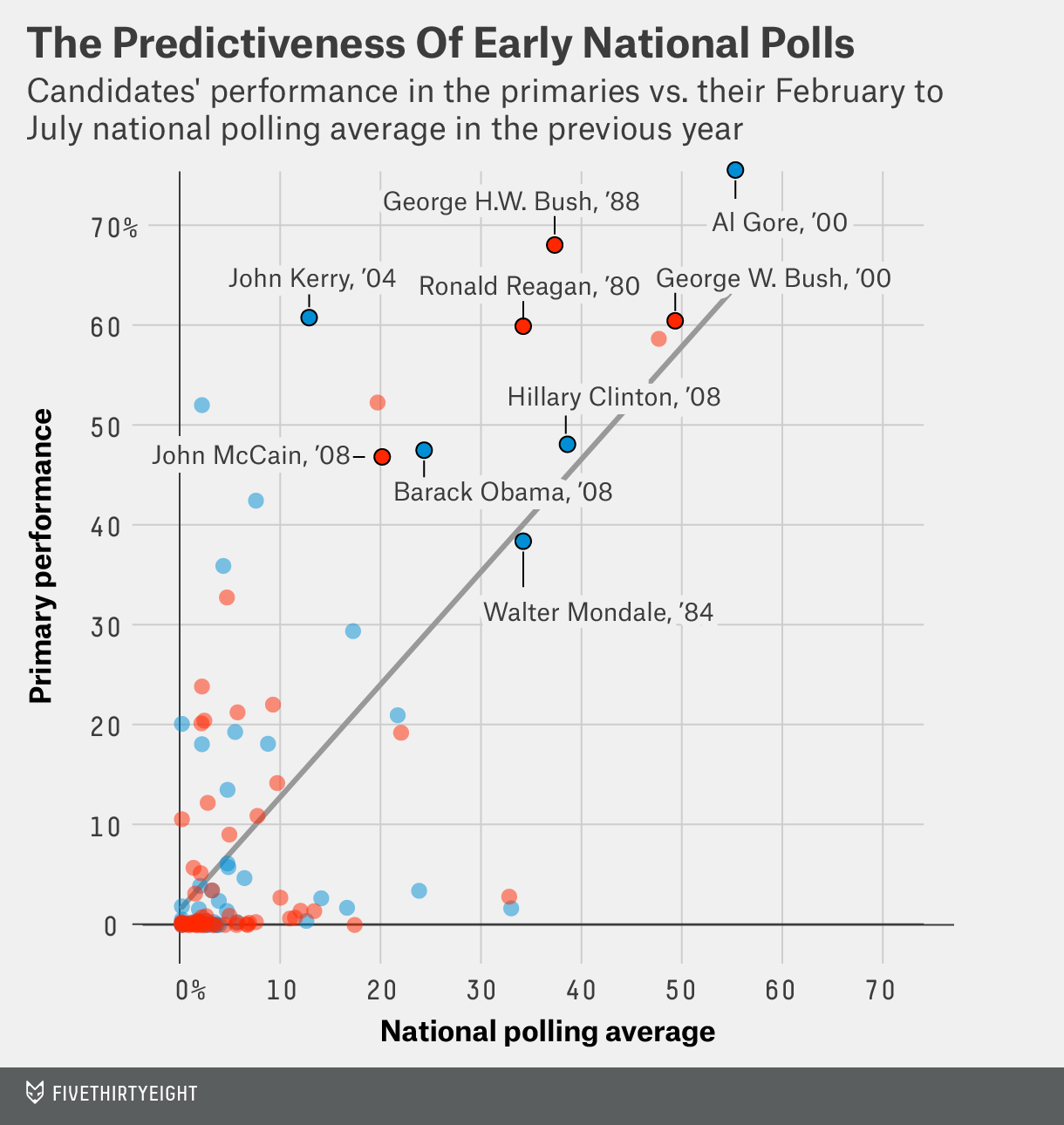 As we’ve written before, and as lots of political science research shows, endorsements are a good way to follow most primary campaigns. But, in more slowly developing campaigns, the endorsement race usually isn’t very meaningful this far before Iowa. That is, the party often doesn’t decide by the summer before the primary.4

This year, for instance, the current leader in the endorsement primary, New Jersey Gov. Chris Christie, has 25 endorsement points.5 Compare that total to George W. Bush’s 399 at this point in the 2000 primary cycle. Does anyone really want to argue that Christie should be considered a favorite for the Republican nomination?

It’s only when one candidate has won 50 percent of all those major party actors who will endorse that it’s is a clear sign that he or she is going to win the primary. In other words, this early in the campaign, there’s not a huge difference in how well the national polls and the early endorsement numbers explain the eventual percentage won by the candidates in the primary season. (Although the endorsement leader at this point in past open primaries has gone on win eight of 12 times since 1980.) 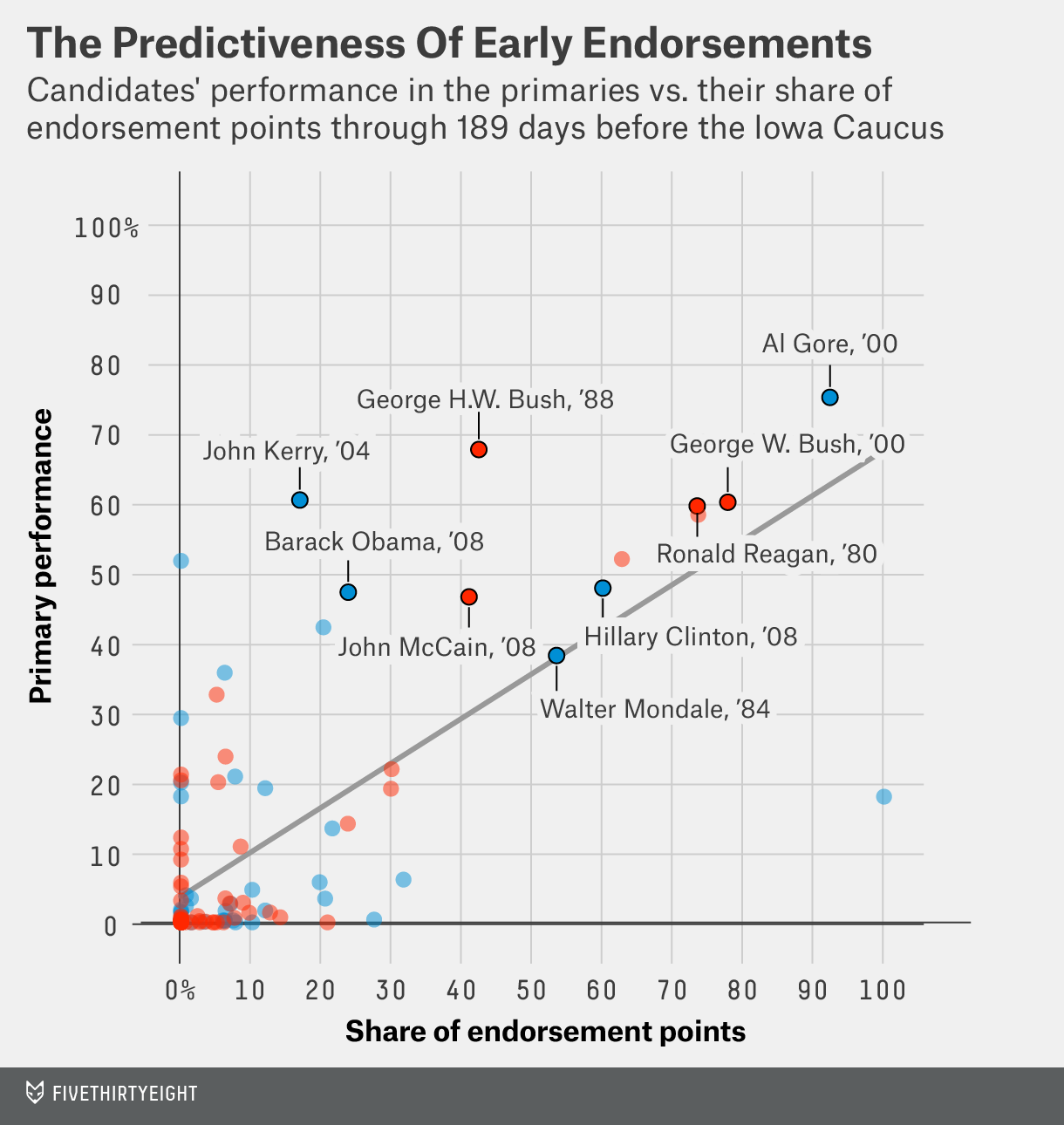 You might think Iowa polls would be better at predicting the eventual vote because Iowans get to know the candidates earlier than almost everyone else. Moreover, the results in Iowa could shape the vote in later primaries; Iowans vote first, so maybe Iowa preferences have a self-fulfilling effect? Not really. In fact, early Iowa polling has been considerably worse than national polling at telling us who is going to do well.6 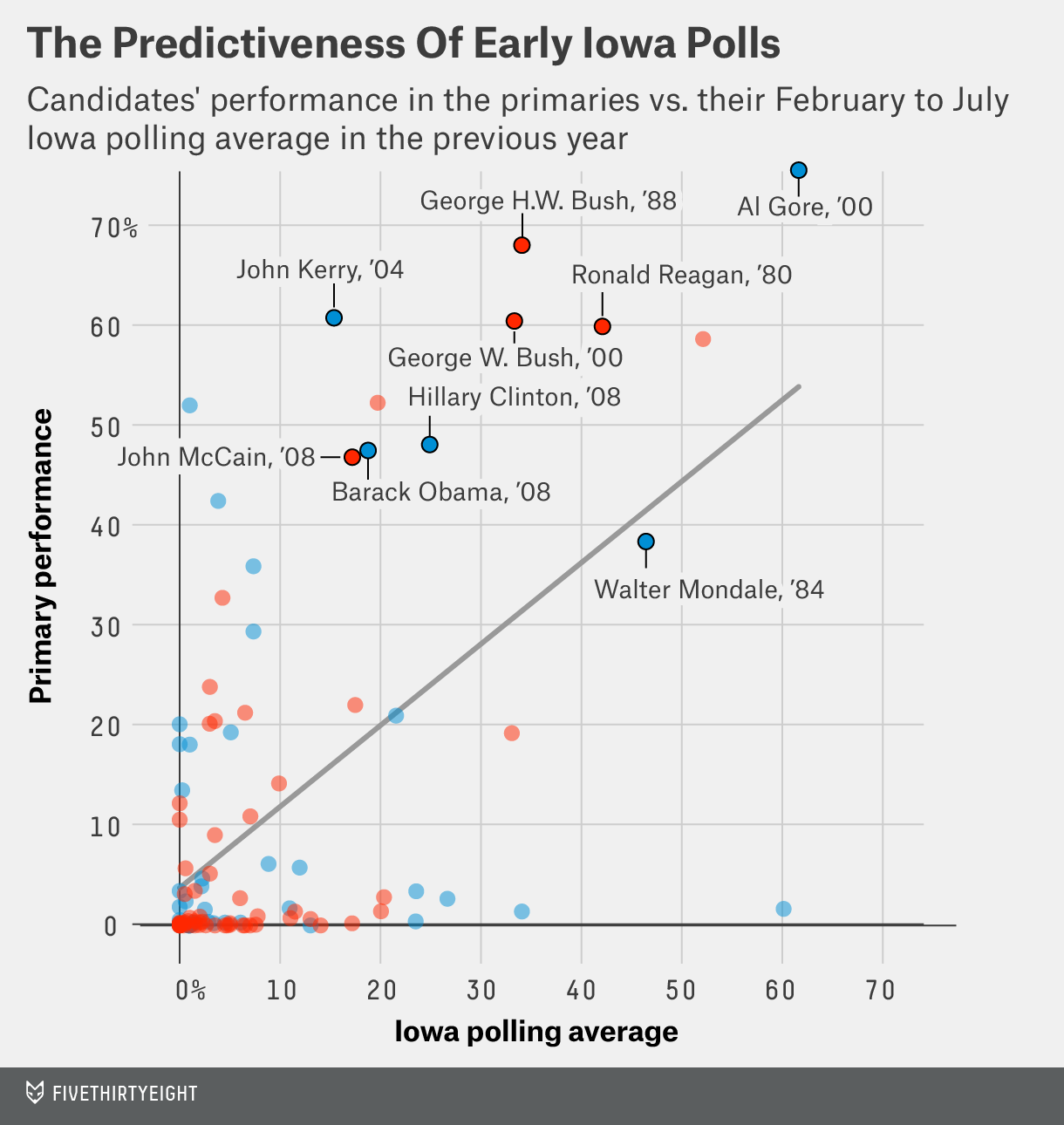 While Iowa polls have predicted the same number of winners as the national polling (seven), the candidates leading in Iowa at this point in past campaigns often went nowhere. See Dick Gephardt in 2004, John Edwards in 2008 and Giuliani in 2008. In the 1988 cycle, Bob Dole was in a considerably stronger position in early Iowa polling than either endorsements or national polling indicated.

You’re going to hear a lot about the gobs and gobs of money the candidates are raising, but the money raised in prior contests by candidates (not super PACs and PACs) through the first half of the year before the primary isn’t any better at predicting the results of the primary than Iowa polling. As I’ve pointed out previously, candidates such as Phil Crane in the 1980 race, Pat Robertson in 1988, Phil Gramm in 1996 and Giuliani in 2008 were bringing in enormous sums; they all went nowhere in the primary.7 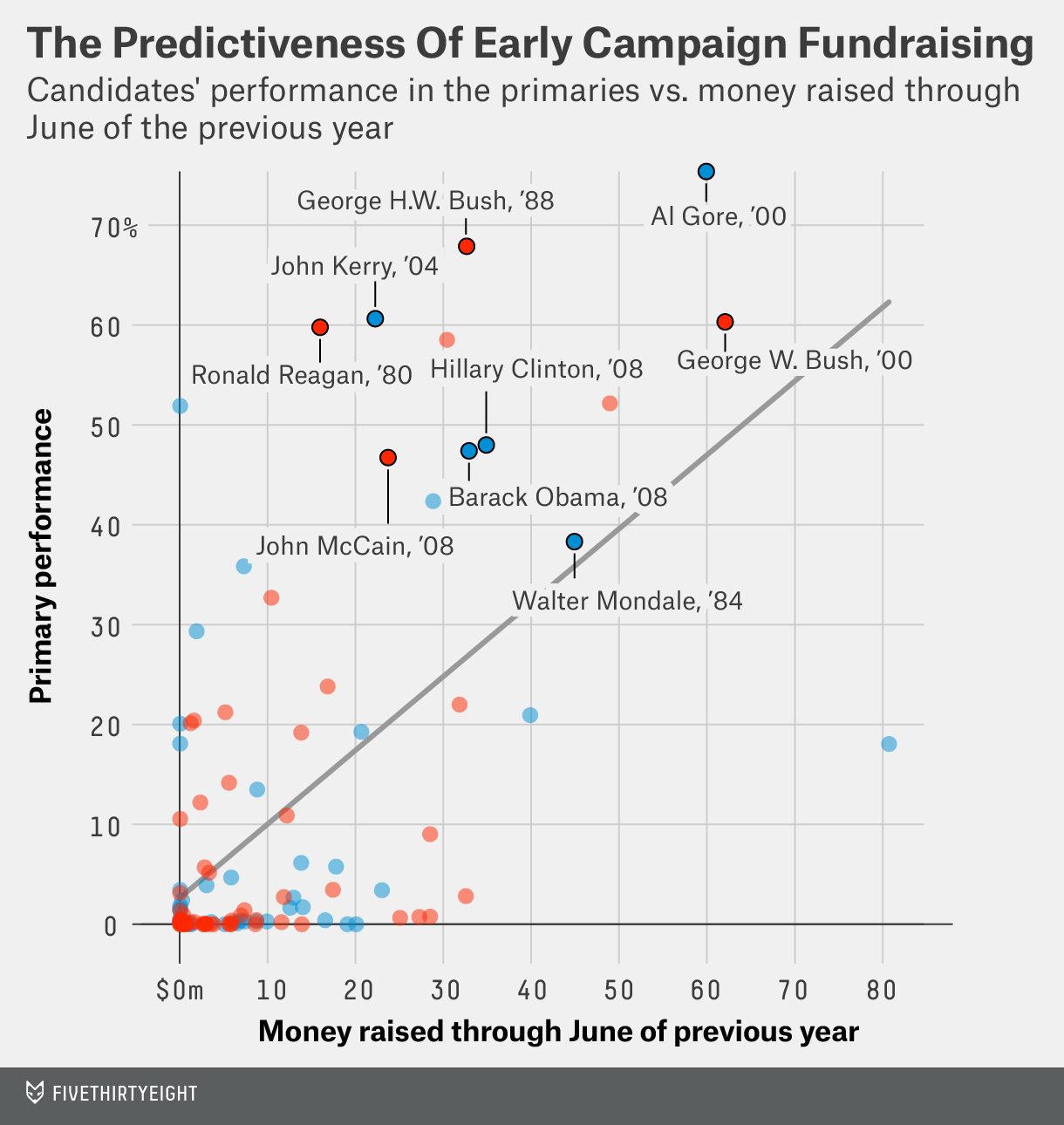 It turns out the best individual predictor of the eventual results has been early New Hampshire polling, which, on average, explains 63 percent of the variation in the actual vote percentage earned in all 50 primaries by the candidates. That’s over 10 percentage points better than national polling or endorsements, but still not an overwhelming advantage (and with our small sample size, I wouldn’t advise anyone to pay attention solely to New Hampshire polls). 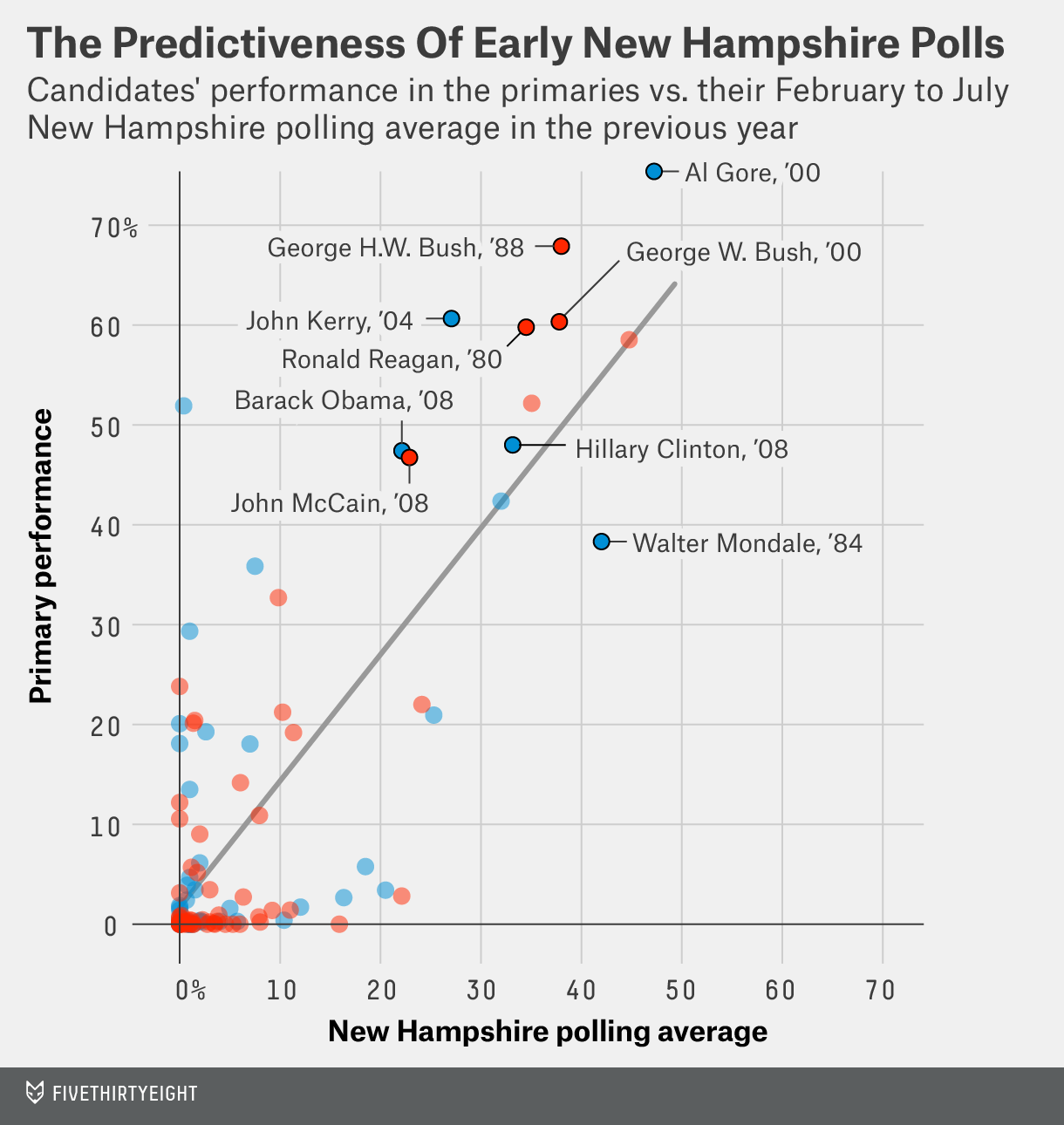 In nine of the 12 contests since 1980, the early New Hampshire polling leader went on to win the nomination. The exceptions were Bill Clinton in 1992, John McCain in 2008 and Barack Obama in 2008. McCain and Obama were both polling in the low 20s and in second place. Bill Clinton wouldn’t enter the race until September 1991 in what was an unusually late-starting primary campaign.

Yet, New Hampshire also has a few things going for it. Like Iowa voters, New Hampshire voters tune into the contest much earlier than most voters nationally. Unlike Iowa, New Hampshire holds a primary vote, not a caucus. That means the primary and the polling for the primary is open to a wider array of voters. Most of the later contests that determine nominees are primaries, not caucuses.

This year, the early New Hampshire polling basically shows what all the indicators do on the Republican side. Yes, Trump is ahead in the New Hampshire surveys right now, but over the last six months the leader is Jeb Bush with 15.1 percent of the vote. Scott Walker is in second with 13.7 percent, Rand Paul is in third with 9.9 percent, Trump is in fourth with 9.7 percent, and Marco Rubio is in fifth with 7.4 percent. Only 1992 featured a race in which the leader in the New Hampshire surveys8 polled weaker than this year.

On the Democratic side, Hillary Clinton leads in the six-month average 51 percent to 19 percent over Sen. Bernie Sanders. As in the Republican race, the short-term average probably gives too much credit to the surging candidate (Sanders). The longer-term average fits with most other pieces of data: Clinton is far and away the front-runner.

Overall, I can’t find too much fault with Fox News (or any other network) using national polling to determine who will eventually be competitive in a primary. There is a good argument to be made that the networks should take a longer-term average. There’s also a good argument to be made that using any of these metrics this early to sort the field by competitiveness is inexact and risky. But if a network is trying to determine a cut-off point so that the debate stage isn’t overfilled, then a national polling average is as good as looking at endorsements or fundraising at this point in the campaign. Adding New Hampshire polls, though, may be even better.