What seemed destined to be an ongoing holdout saga between Dez Bryant and the Dallas Cowboys came to an abrupt end Wednesday when the two sides reached a deal for a five-year, $70 million contract with $32 million fully guaranteed (with up to $45 million sort of guaranteed). Right around the same time, the Broncos re-signed Demaryius Thomas for an eerily similar amount.

While not quite as precedent-shattering as the $100-million-plus with $50 million(ish) guaranteed that Calvin Johnson — perhaps the premier wide receiver of our time — got in 2012, these are still staggering numbers. This isn’t receiver money, it’s quarterback money. The contract’s $14 million per year average is right around the median for starting quarterbacks, and the guaranteed money is approaching the top 10. In March, two-time Super Bowl champion Ben Roethlisberger signed a new deal with the Steelers, with $31 million guaranteed. Can this possibly be worth it?

Let me preface by saying that Bryant and Thomas have elite-level production. If we look slightly beyond the headline stats such as yards and touchdowns, we can see that their teams lean on them substantially and are rewarded with good results. Below is a chart of the average yards receivers gained each time they were targeted, plotted against how often they were targeted (for all qualifying receivers from the 2014-15 season). Keep in mind that teams typically throw at their better receivers more often, but they’re also likely giving those receivers worse opportunities on average (sort of like how high-volume shooters in basketball have to take more bad shots). So the better a receiver is, the more passes he gets, but the harder it is to consistently make catches and put up big gains. 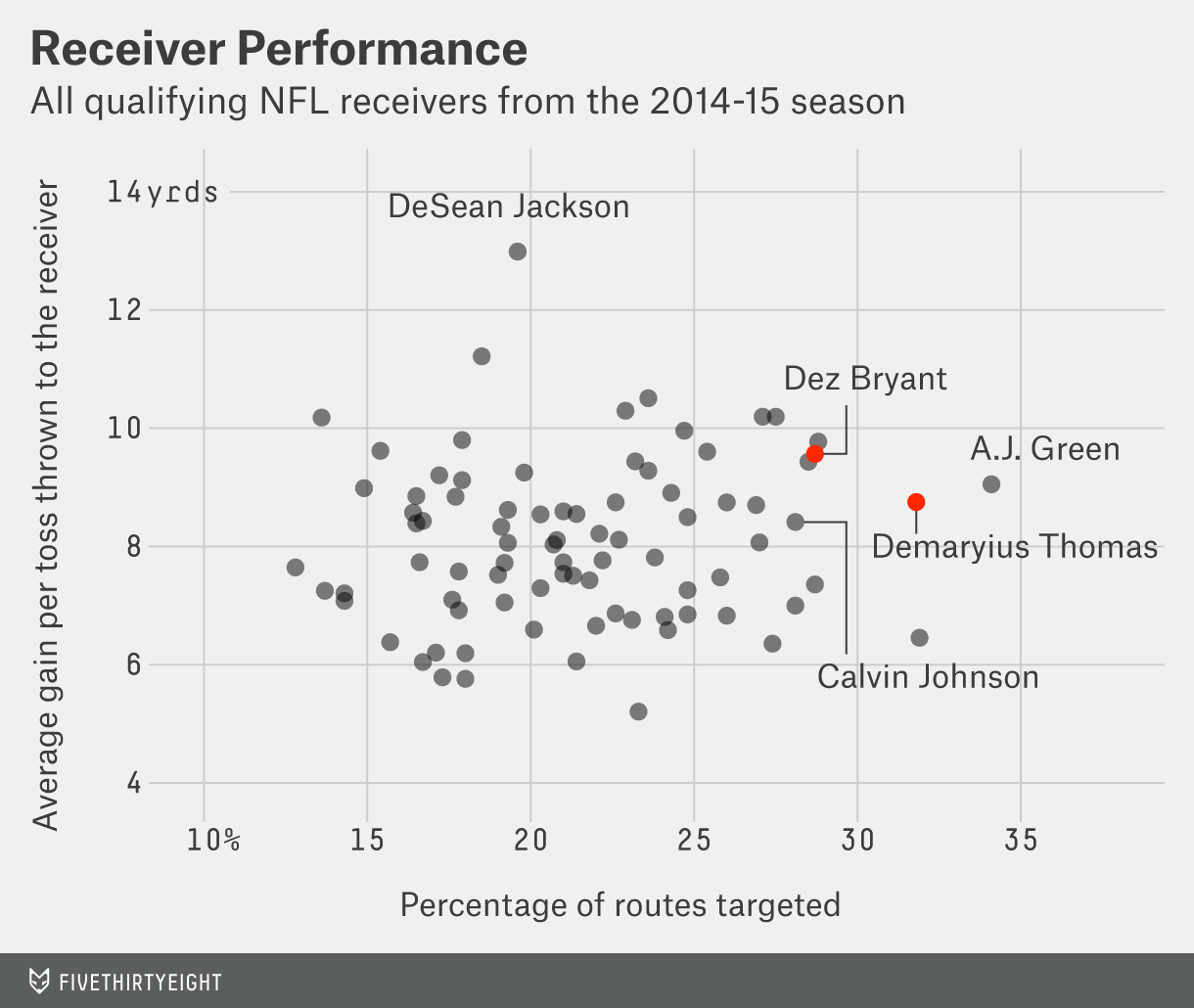 In that chart, the closer a receiver is to the upper right, the better he is. You can imagine a boundary connecting DeSean Jackson and A.J. Green, and anyone falling along or close to that boundary has a strong case for being top tier. Call it the “presumptively good” zone. Thomas has one of the largest target rates, yet is well above average in yards gained per target. That’s impressive given the more-passes-means-worse-passes dynamic I mentioned earlier. Bryant’s offense ran through him a little less than Thomas’s last year, but he gained more yards on average and is in the upper tier for both.

But this is where the NFL gets hard (and/or fun, depending on your perspective). In baseball, statistical production is pretty much the same as actual production — either a player has high WAR or he doesn’t. In basketball, things are a little trickier: Good stats correlate strongly with good value — that is, take away a productive and efficient player, and a team is likely worse off, but we’re still just modeling value with statistical proxies. In football, however, individual statistics pretty much don’t exist. The statistical results for players are so hopelessly entangled with each other that it is often impossible to accurately assign credit (at least at the current level of granularity).

Bryant and Thomas are particularly hard to decipher: First, they’re receivers, and trying to make sense of a QB/WR pairing can be frustrating at best, futile at worst. It can take a virtually unprecedented data set to conclude anything with much certainty. That they both play with amazing quarterbacks only furthers the difficulty. Tony Romo was an award-winning MVP candidate last year and had the highest passer rating and Total QBR in football. And having Peyton Manning throw to you is pretty much steroids for receivers (possibly even affecting legacies the same way suspicion of PED usage does). But more importantly, both quarterbacks were doing fine without them: 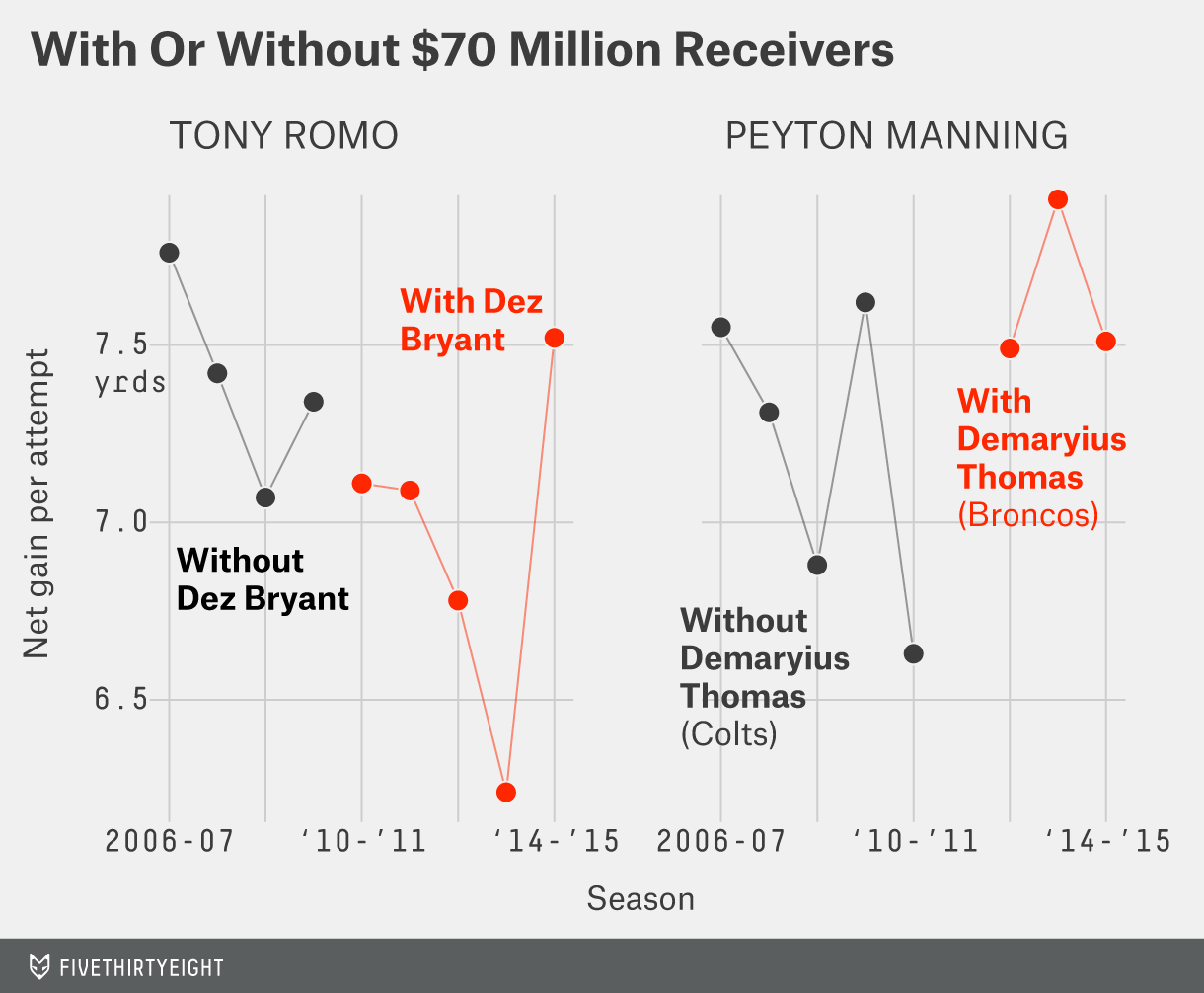 Net yards per attempt doesn’t capture everything about an offense, but it captures about as much as any other metric. Manning has seen an improvement since playing with Thomas, but of course Manning has also been playing with an entirely new team. Romo’s 2014-15 season was the best he has had in a while, but Bryant has been producing at his current level for three or four years now, and Romo has been no better in those years on average than in years previous.

Which brings us back to those big contracts. In general, my reflex is to think that most huge contracts given to non-QBs are too large. In addition to worrying about injury, aging, etc., a general manager also has to worry that he might be wrong about someone because of some other factor on the team. A seemingly great player may really be only kind of good, or worse (and you may never even know).

The 2015 salary cap is set at $143 million, which means the yearly salaries for Bryant and Thomas will be close to 10 percent of the cap (and their guarantees are somewhere between 22 percent and 32 percent of the cap, depending on which guarantee you use). Filling out a 53-man roster with “replacement” players already costs $30-million-plus, and a good quarterback costs another $15-20 million.1 That means these teams are choosing to exhaust somewhere north of 15 percent of their available cap space for one player on one side of the ball who will be one option in the passing game.

A lot has to go right to make this strategy work. Even if a GM is right, and a player actually is that good, and the player doesn’t get injured, and he performs up to standard for the length of his contract, and he has enough impact to justify the cost, a team still doesn’t contend for championships by paying players what they’re worth. It does it by paying them less than they’re worth. Here’s a blueprint: top quarterback (because top QBs are underpaid), rookie contracts, veterans that everyone else undervalues, spare parts that work well together, and coaches that can make the most of it all. Sound like any team you know?

Perhaps the Broncos and Cowboys are good enough elsewhere that their best shot of winning a championship is to let a significant amount of their cap space tread water (best case) for a few years. For 2015-16, all that matters is putting the best team they can on the field. But impatience has rarely been a successful strategy in the NFL.