This is the fourth article in a series that will look at constituencies that are statistical extremes in the U.K. — how they’ve shaped British politics and British people. The first looked at race and ethnicity, the second looked at age, and the third looked at support for UKIP.

Sharon Gibson, 43, lives in Lockerbie, Scotland. And she has a very local perspective on David Mundell, the Conservative candidate who is running in Thursday’s national election to represent her in Parliament.

“It’s not Mund-ail, it’s Mun-dle — we remember him before he was a politician,” she told me in one of the town’s pubs last month. Gibson was with her husband, daughter, granddaughter, stepson and her stepson’s friend to have an afterwork drink with two other friends. “Once he came to knock on our door campaigning, and my mum, she answers and she says, ‘I remember you when you were a wee bairn — do you still have as much shit in your nappies?’”

She’s not the only one. Here in Lockerbie, which is on the western side of the constituency of Dumfriesshire, Clydesdale and Tweeddale, politics is a local affair. Which is not what I was expecting at all — I came here because this is the most nationally representative seat in the country. Or at least it was in 2010, the last time the U.K. voted. 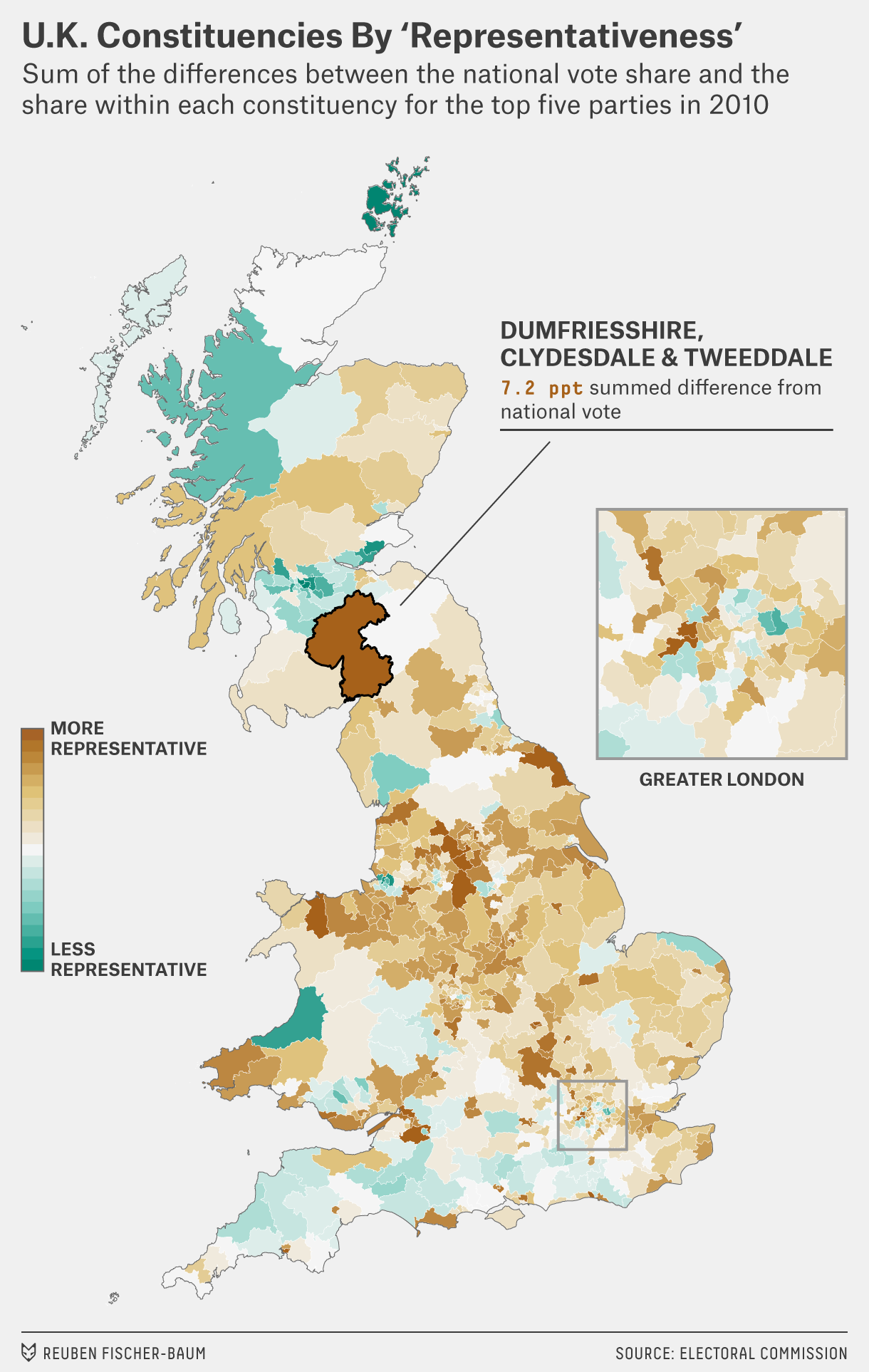 To find the U.K.’s most average constituency in terms of electoral politics, you need to look at the five parties expected to win the largest vote share in this general election: the Conservatives, Labour, the Liberal Democrats, the U.K. Independence Party and the Greens.1 You can then take any given constituency in the U.K. and see how its support for those five major parties compared to the support the parties received in the U.K. as a whole in 2010. Let’s take Dumfriesshire, Clydesdale and Tweeddale for example. In the last election, the Conservative Party received 38.0 percent of the vote here but only 36.1 percent of the vote nationally — that’s an absolute percentage point difference of 1.9. If you do that for each of the five major parties in Dumfriesshire and add up those differences, you get a total percentage point difference of 7.2 from the national vote.

I did that for all 650 U.K. constituencies. A lower overall score indicates a constituency that is more similar to the country as a whole, while a higher overall score would be less representative. The most representative constituency in the country was here: Dumfriesshire, Clydesdale and Tweeddale.2 Its score is unusually low — the median difference in 2010 support for the major parties compared to the national results across all constituencies was 34.5 percentage points.

I didn’t expect the most representative constituency to be in Scotland, a part of the U.K. that has been characterized by a nationalist movement for almost half a century. And neither did any of the local people I speak to — all of them, including Mundell, the incumbent MP, assumed that I was here to cover the fact that for the past 10 years, this has been the only Conservative seat in Scotland.

But just because this place is close to the national political average doesn’t mean it should be interpreted as some sort of golden political barometer. In the last election, the Conservatives beat Labour by 7.1 percentage points nationally and they were ahead by 9.1 percentage points here. In this election, the Conservative Party is projected to win 35 percent of the national vote to Labour’s 33 percent. But here in Dumfriesshire, Clydesdale and Tweeddale, as is the case elsewhere in Scotland, the Scottish National Party has surged ahead as Scottish nationalism has gained momentum, despite (or perhaps because of) last year’s unsuccessful Scottish independence vote. Now it looks like the SNP could steal the seat from Mundell by a percentage point or two.

When Mundell was first elected here in 2005, he became the MP of a newly created seat. If the name “Dumfriesshire, Clydesdale and Tweeddale” sounds like a mouthful, that’s because its boundaries were mainly drawn from three different constituencies: Dumfries; Clydesdale; and Tweeddale, Ettrick and Lauderdale. Each of those had its own distinct political influences.

In the old seat of Dumfries, Labour had been in power since 1997, although the Conservatives had held it for 30 years before that. Clydesdale had been a Labour seat since its creation in 1983. And Tweeddale, Ettrick & Lauderdale had been Liberal Democrat ever since it too was formed in 1983. When parts of all three areas became Dumfriesshire, Clydesdale and Tweeddale, they each brought their electoral dynamics to the area, making this place, at least in 2010, a political microcosm of the U.K.

The long name also points to the vastness of this constituency. Although U.K. constituencies vary considerably in size, this is one of the largest in the country. As a result, residents here are spread out in their own specific towns — Annan, Biggar, Gretna, Innerleithen, Langholm, Lockerbie, Moffat and Peebles — separated by large rural areas. Boundary changes don’t suddenly result in opportunities for residents to spend more time together exchanging political views.

The constituency does look homogenous in some ways, though — 96.2 percent of residents were born in the U.K. and only 1 percent of people who live here aren’t white. (To put those numbers in context: Among constituencies in England, Wales and Scotland, the median percentage of residents born in the U.K. is 92.5 percent, and across the entire U.K., the median non-white population is 5.2 percent.) Despite that, there are clearly hyper-local identities even beyond political ones.

In the Lockerbie pub, Gibson tells me that she still isn’t really viewed as being “from ’round here” because she spent the first three years of her life in a town a few miles away. Most of the people in the pub work at the local cardboard factory. Her husband asks me where I’ve come from. I say that I have just made the 25-minute drive from nearby Moffat. Several of the patrons shake their heads or slowly inhale. Moffat people, I’m told, aren’t as friendly as the folks here in Lockerbie.

Constituents here don’t only disagree with one another — they disagree with the U.K. as a whole when it comes to political priorities. People here told me that Britain spends too much on development aid and that it should be cut (nationally, 82 percent of Brits say development aid is very or fairly important to help people). I was also told that this was an area that lacked much-needed migrants (while 49 percent of Brits nationally say that the level of immigration to Britain should be reduced). And I was told that Britain should stay out of foreign policy issues that don’t directly affect the country, particularly those relating to military action. Those views ultimately come down to a sort of localism. As Mundell put it when I spoke to him in his constituency office, “You see this stuff on the front page of the paper, but we don’t hear any phone calls about it, any emails, any letters.”

Just five years ago, this constituency was the most politically average in the country. I find that the local identities here are characterized by competing political views, frustration, disagreement and yet, somehow, peace and functionality. In that sense, this place is still quite representative of British politics.

Leaving the next day, I take a detour farther into the heart of the constituency and drive through the village of Boreland. On the other side, I arrive at Samye Ling, the first Tibetan monastery in the Western world. I’m reminded that even in seemingly average places, you should expect to be surprised.