This is the second article in a series that will look at constituencies that are statistical extremes in the U.K. — how they’ve shaped British politics and British people. The first looked at race and ethnicity.

The Liberal Democrats probably now feel a little embarrassed by their strategy in the last election.

Take their national campaign video, titled “Say Goodbye to Broken Promises”: In it, the leader of the party, Nick Clegg, walked around familiar British scenes as pieces of paper swirled in the wind behind him. It began with a close-up of one of those pieces of paper, which read “NO STUDENT TUITION FEES,” with the word “LABOUR” beneath it. It was a reference to a promise that had been made by the Labour Party in the 2001 election to not increase tuition fees. Less than three years later, the Labour government tripled those fees.

“He did say he wouldn’t and then obviously he went back on that … that has obviously affected me going to university,” said Hannah Robertson, a student at the University of Southampton who grew up in Sheffield Central in the North of England. We met at the Yellow Arch studios, a live-music venue in her hometown, five weeks before the general election.

But Robertson isn’t talking about Tony Blair in 2001; she’s talking about Clegg in 2010. This will be the first time the 20-year-old Robertson will vote in a national election, and she’s weighing up the various parties. Now, when she thinks of broken promises, it isn’t Labour or the Conservatives or any other major party that comes to mind — it’s the Liberal Democrats.

In April 2010, ahead of the last national election, the Liberal Democrats repeatedly vowed to “scrap unfair university tuition fees.” A month later, the party won 23 percent of the vote (its highest share in over two decades) and 57 seats. Its newfound numbers made the Lib Dems attractive political allies, and the center-left party entered a coalition government with the Conservative Party, which had made no campaign promises about cutting the cost of higher education. A government-commissioned review soon suggested raising university tuition fees, drawing a London protest of an estimated 50,000 people organized by the National Union of Students. A month later, 28 Liberal Democrat members of Parliament, including Clegg, still voted in favor of tripling university tuition fees.

Robertson isn’t the only new voter to remember that broken promise. In the last election, 30 percent of 18- to 24-year-olds voted for the Liberal Democrats. In this election, only 10 percent of people ages 18 to 24 are expected to vote for the party. (Overall, the party is polling at 9 percent.)

Falling support from young voters has hurt the Liberal Democrats — especially here in Sheffield Central, Britain’s youngest constituency and a target seat for the party just five years ago. 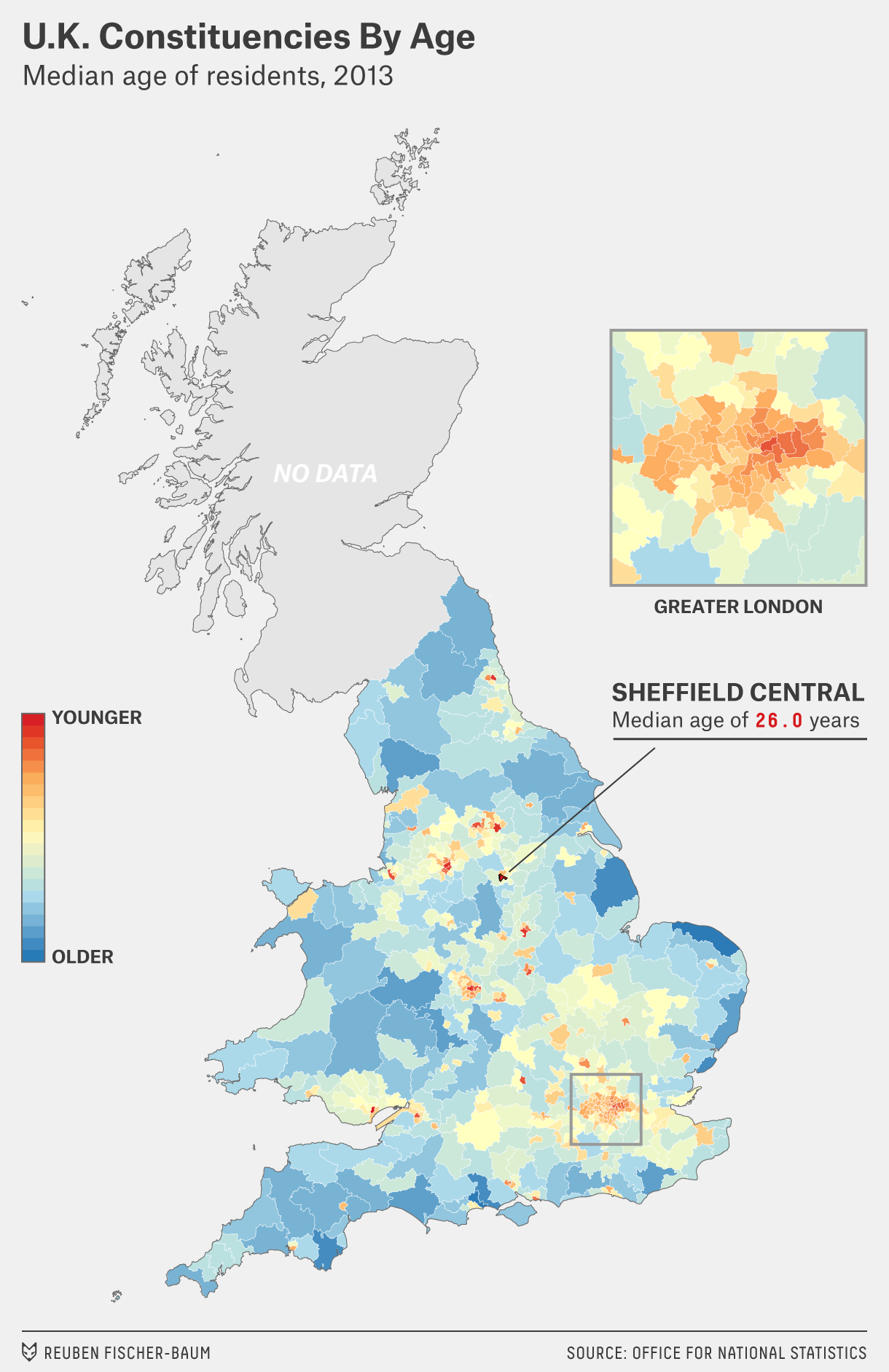 In England and Wales, the median age is 39.6 years — in Sheffield Central, it’s just 26 years. The third- and 17th-largest universities in the U.K. are here, with a combined student body of 59,700. Those students affect political demographics for one, possibly two, reasons: First, British students can register to vote in the constituency where they attend university. Second, young people here told me that more students decide to stay in Sheffield after graduating than any other university town in the country, a claim that the University of Sheffield has also repeatedly made.

The Liberal Democrats knew this place was full of young voters who could give them an electoral boost. In fact, one of the scenes in the “Say Goodbye to Broken Promises” video was shot right here in Sheffield Central’s Peace Gardens. In 2010, the party selected one of its top men to run in this area: Paul Scriven. Scriven had served as a councillor in Sheffield since 2000 and as leader of the council since 2008. It was always going to be tough to win a seat that had been Labour since 1950, but Scriven worked hard.

And he came damn close. Although the Labour candidate, Paul Blomfield, eventually won the seat, it was one of the tightest races in the country; there were only 165 votes between Blomfield and Scriven, a number determined only after a recount.

“I always knew it was extremely marginal,” Blomfield, who has been Sheffield Central’s MP for the past five years and is now running for re-election, told me by phone about the tight 2010 race. He remembers just how important tuition fees were in the Liberal Democrat campaign here — and when he remembers it, his voice takes on the same anger I heard from others I spoke to. Blomfield continued: “They fought their campaign relentlessly on that issue. They spent hours and hours on it; it was the center of their campaign.” Labour, perhaps having learned from past mistakes, made no promises about capping or lowering tuition fees in its manifesto that year.

Things aren’t looking so close now, though. According to the latest forecast, Labour is set to win 51 percent in Sheffield Central on May 7. The Liberal Democrats are still the second-largest party here, but they’re expected to pick up only 18 percent of the vote. The party has shifted its focus away from Sheffield Central, and its candidate this year, Joe Otten, a four-year city council veteran, is young and relatively politically inexperienced.

After being defeated in 2010, Scriven became a victim of the Liberal Democrats’ waning support in this area. A year later, Labour managed to grab nine seats from the Liberal Democrats in local council elections — gaining a majority in the process and forcing Scriven to stand down. But things didn’t end too badly for Scriven — he was appointed to the upper house of Parliament, the House of Lords, three years later.

To understand the Liberal Democrats’ change of fortunes in Sheffield Central, it’s important to recall those students. In March of this year, the research company High Fliers conducted face-to-face interviews with 13,039 final-year students at universities across the U.K. Some 53 percent of respondents said, “I wouldn’t vote for the Lib Dems because they increased university tuition fees.” Only 6 percent of the students said they would vote for the Liberal Democrats — in Sheffield, that share was 5 percent.

It’s not just students — other voters took note, and members of the party know it. Last September, 64 Liberal Democrat candidates were surveyed about the party’s past and future. Three-quarters of them agreed: “Breaking the pledge to not increase tuition fees has broken the trust voters had in the Liberal Democrats.”

Nationally, the party’s support is forecast to fall from 23 percent to 12 percent. As a result, they’re expected to lose 29 seats, some to Labour, some to the Conservatives and some to the Scottish National Party. That has drastically changed the Liberal Democrats’ place in the political landscape. For the past few months, neither Labour nor the Conservatives have said much about a possible coalition government with the Liberal Democrats — they know that even with Clegg’s support, they can’t get enough seats for a majority.

But none of this necessarily means the end of the Liberal Democrat party in the U.K. Hannah Robertson might remember Clegg’s broken promise on tuition fees, but that’s not the only thing she remembers. After a pause, she said: “He did also say sorry. And he’s also deputy [prime minister], so I take that into account.”

In September 2012, nearly two years after the tuition vote, Clegg issued a public apology for raising fees when the party had promised to cut them. Speaking directly to the camera, he finished by saying: “Most important of all, you’ve got to learn from your mistakes, and that’s what we will do. I will never again make a pledge unless as a party we are absolutely clear about how we can keep it.”

Clegg seemed to be alluding to the party’s inexperience. When they entered the coalition in 2010, the Liberal Democrats had never been in government before. For older voters like Robertson’s dad, that inexperience is relevant to the party’s failures. “You do feel a bit sorry for them,” Neil Robertson told me. “They did so amazingly last time to get in, they probably sold their soul a little bit in the process and then lost support because of it.” But older voters like Neil are less influential in changing outcomes — they’re more likely to have already decided whom they want to vote for.

Unlike her father, and like 20 percent of voters her age, Hannah Robertson is undecided. No other age group is as likely to say “don’t know” when asked about its voting intention. A closer look at 1,511 undecided voters earlier this month found that when asked who they would vote for if voting were legally required and the election were tomorrow, only 6 percent of undecideds ages 18 to 24 chose the Liberal Democrats (37 percent in that age group said Labour, and 25 percent said the Conservatives).

While it’s true that tuition fees have cast a long shadow over the Liberal Democrats in this campaign, things may well look very different in 2020. The long-held, almost tribal, political alliances of older Brits don’t exist among many young voters. Which means everything is to play for. But if you make promises, you better keep them.