This is the first article in a series that will look at constituencies that are statistical extremes in the U.K. — how they’ve shaped British politics and British people.

There are two mosques on Church Road. I arrive at one of them just after prayers have finished one afternoon in early April, and as I peer my head around the entrance, I see a man hopping on one leg dressed in a black parking inspector’s uniform. He slips his foot into a black regulation shoe that he left on the grid of shelves that line the lobby when he went in to pray.

“Do you have time to talk to me about the election?”

I step back outside so that I’m not in the way of the men silently filing out of the mosque. One tall man with a round stomach slowly passes me in a beige salwar kameez, his sandals flapping behind him as he talks quietly into a cell phone. I don’t recognize the language, but I’m hardly surprised — I am, after all, in East Ham. Only 58.6 percent of people in Newham, the local authority1 where East Ham is found, reported English as their main language in the 2011 census,2 the lowest share of anywhere in England and Wales.

I’m here because the residents of this East London constituency make this place an outlier in a number of ways. This is the U.K.’s most ethnically diverse constituency and one of its most religious areas. It has the highest number of residents who were born abroad — 83,223, according to the 2011 census. And, according to the Office for National Statistics (ONS), 77 percent of the population here is non-white, the highest share of anywhere in the country. The median across the U.K.’s 650 constituencies is just 5.2 percent non-white.

In other words, this place sticks out statistically. 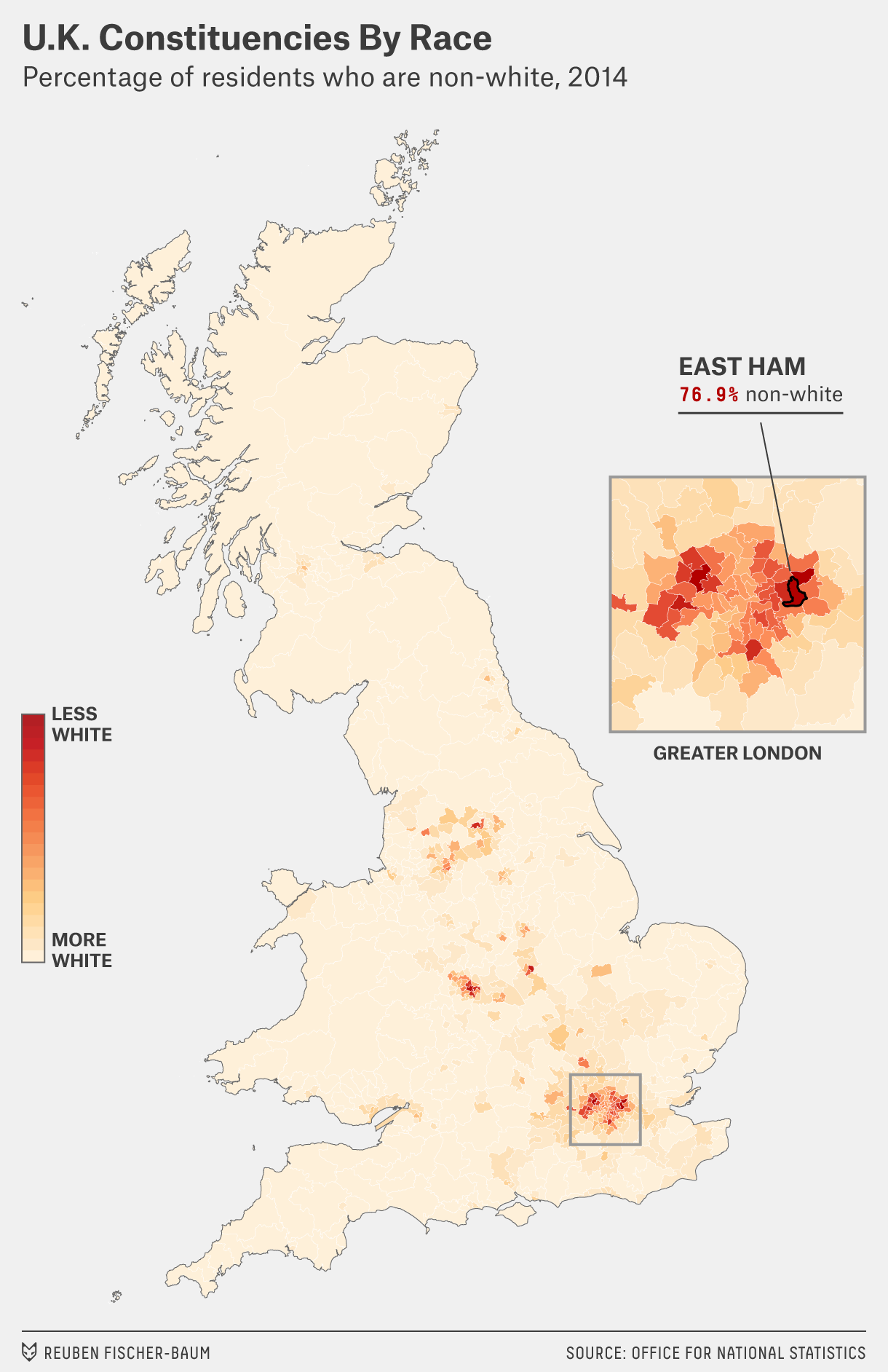 Understanding those numbers is important in explaining why this is one of the safest Labour seats in the country. East Ham has been represented by a Labour member of Parliament (MP) since the seat was formed in 1997. In the 2010 general election, Labour won 70 percent of the vote here and is projected to win 69 percent on May 7.

But while residents here are a key part of this political continuity, they’re also in some ways the focus of calls for political change. Race and religion are rarely explicit talking points in U.K. politics, but they’re often implicit when the topic of immigration comes up — as it now so often does.

That evening, the first of two debates is aired on national television. Leaders of the seven largest political parties take to podiums to present their visions for the country, debate them and take a handful of questions from members of the audience. Race doesn’t come up once, but immigration features heavily. The politicians exchange insults about inaction and make promises about immigration policies. If those policies were different — and most of the party leaders say they should be — maybe East Ham wouldn’t look the way it does now.

In 1999, my mum started working in East Ham as a general practitioner in a National Health Service medical practice that was made up of two small terraced houses with one wall between the two knocked down. Each summer, after a few weeks of holidays had passed and the boredom had become unbearable, my best friend and I would go to the surgery to help out. We would prepare new files for new patients in a waiting area that had once been a living room. There were always new files to make because there were always new patients. Six years ago, the surgery moved to a much larger multi-story, multi-practice building half a mile away to cope with increasing demand.

Between the 1991 and 2011 censuses, the population of Newham grew 42 percent. That growth has been almost exclusively non-white, as the Centre on Dynamics of Ethnicity at the University of Manchester shows below. 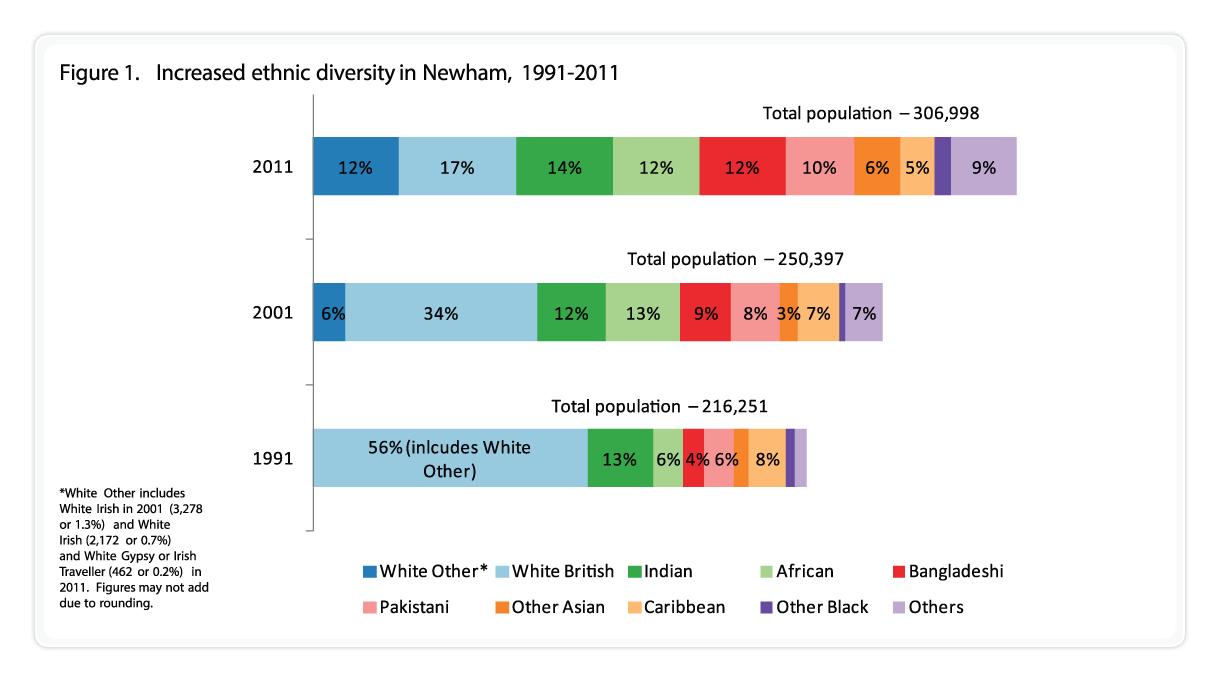 There’s no data on race and voting patterns at the constituency level, but it’s safe to say that the high share of ethnic minorities here has driven Labour’s success in East Ham. Between May and August 2010, the Ethnic Minority British Election Study asked almost 4,000 voters nationally who they had chosen in the general election that May. Of Brits who were ethnic minorities, 68 percent supported Labour; that compares with 31 percent of whites.

And religiosity in the area has probably played a role, too. Newham is the least irreligious place in the country: Only 9.5 percent of residents say they have no religion, compared with 24.7 percent in England. That’s partly because the share of the population that is Hindu is six times larger in Newham than it is at the national level — the same is true of the Muslim population.

Between February and March of last year, the British Election Study conducted a national survey on the attitudes of religious groups. Among those who said their religion was Islam, 73 percent said they would vote Labour. It’s a strikingly high figure — only 40 percent of those with no religion and 32 percent of Anglicans said they would vote Labour (the largest and second-largest groups of respondents, respectively). 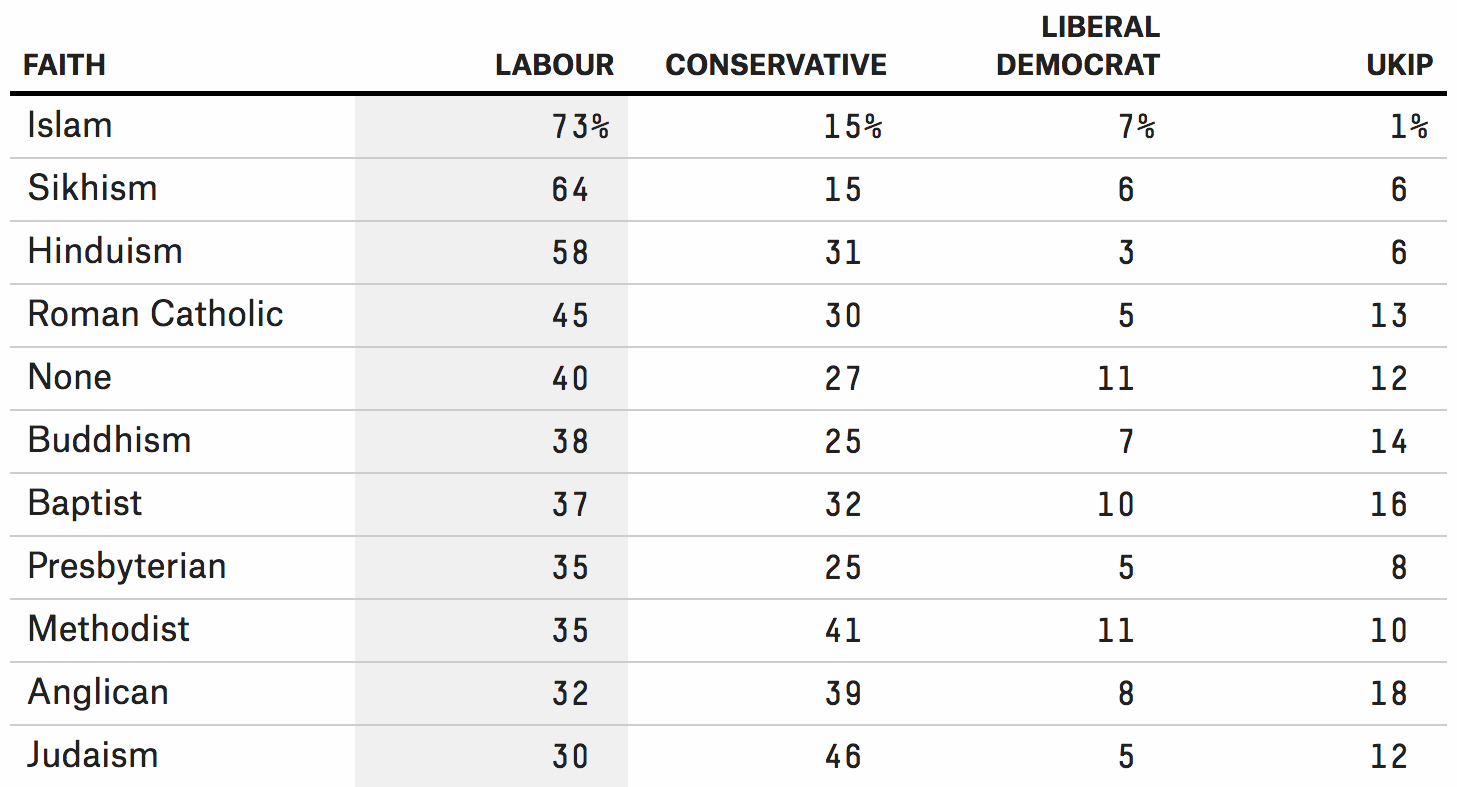 Stephen Timms, who has represented East Ham in Parliament since 1994,4 is well aware that he represents an incredibly diverse constituency. He’s also probably well aware that the racial and religious makeup of his constituency has helped secure his seat as a Labour MP. But it’s not just political demographics — Timms is also well-liked by his constituents. Several people I spoke to gave examples of how he had helped them personally. He votes strongly in favor of raising welfare benefits and against reducing housing benefits, issues that are especially important in this area where 42 percent of children live in poverty.

After a string of high-profile roles, most recently as shadow employment minister, Timms, 59, is now the Labour party’s “Faith Envoy” (he took up Christianity in his teens).

But this long political career, one built on a very solid electoral majority, has not been without incident.

Just a week after re-winning his seat in the last election, Timms was stabbed twice in the stomach by a constituent at an advice surgery — a regular session for MPs to hear the concerns of the people they represent. His attacker, Roshonara Choudhry, a 21-year-old student, said she was inspired by an al-Qaida cleric and wanted to punish Timms for voting in favor of the Iraq War. Aside from giving a few interviews about it, Timms finished his most recent political term without emphasizing the attempted murder.

When I call him, hours before the first leaders debate is due to air, I ask Timms, who is seeking re-election, about race in East Ham. Timms, who is white, speaks about it comfortably.

“You’d think that a very diverse place like this was kind of, by definition, a pretty fragmented community — I actually don’t think that’s the case,” he said. “I think this is actually a quite cohesive community, and I think the reason for that is the great majority of people in this area belong to something. They belong to a church or a mosque or a temple or a gurdwara.”

A thriving religious community and a high vote share for Labour don’t mean there isn’t political debate in East Ham. The U.K. Independence Party (UKIP) has a candidate standing in East Ham who is expected to get 5 percent of the vote in this election (nowhere near enough to unseat Timms, and lower than the 11 percent median vote share that UKIP is projected to get across the U.K.). Britain’s newest political force, UKIP has the strongest stance of any party on immigration — it wants the country to get out of the EU because it believes immigration is unsustainably high.

In 2010, UKIP was politically irrelevant. But the party came in first in the 2014 European Parliament elections, which was followed by two wins in U.K. by-elections. Now, UKIP is shaping the debate on immigration — and by extension, the stakes of this election. Nationally, 27 percent of voters say immigration is the most important issue facing Britain, more than any other single issue. I told Timms that even some of the immigrants I’d spoken to in East Ham were worried that immigration was too high.

“I’m not surprised you came across that,” he said. “It is sometimes a little bit surprising to listen to someone who is clearly an immigrant complaining about immigration, but people do feel quite strongly about that. … Quite a lot of Labour supporters think this is an important issue, and they need to feel that the system is properly managed and fairly.”

From the outside, Trinity Community Centre looks like a church so typical that it could be part of a toy train set, made of plastic and placed next to the pretend railway station. I’m greeted in the hallway by a suited Sikh man in a turban holding a clipboard. I tell him that I’m looking for the advice surgery. Only the staff is here today — with the election just five weeks away, Timms is busy with “other commitments.”

Someone somewhere is playing the 1994 disco hit “U Sure Do” by Strike very, very loudly. Over the man’s shoulder, I can see through a glass window — streamers hang from the ceiling, and balloons float between adults and children. I ask if it’s a birthday party, and he tells me that it’s a therapy group for children with disabilities.

A lot of community support groups meet here. If I had arrived at another time or on another day, I might have bumped into Dost, a service for refugee, asylum-seeking, trafficked, undocumented or new migrants between the ages of 11 and 25. Or I might have seen one of the adult education classes or stumbled across Bayaan, a support group that encourages young Asian girls to get into higher education.

The man with the clipboard points above his head: “The advice surgery is upstairs.”

There’s no data on support for UKIP by race either nationally or at the constituency level, but there is evidence that many voters are concerned about the party’s racial politics. In a survey last May, 41 percent of people said they believed UKIP was a racist party and 46 percent said they believed UKIP was “deliberately trying to attract support from racist voters.” The Guardian recently reported that “Are UKIP racist?” was the most common Google search about the party in March.

UKIP’s public policies don’t use xenophobic language, but the party’s general position on immigration and a string of racist incidents involving UKIP members can leave British voters straining for subtext.

Given all that, it seems unlikely that UKIP will be able to win over ethnic minorities in East Ham or elsewhere in Britain. But that doesn’t mean Labour can be complacent about these voters. Britain’s political landscape has changed quite rapidly — established parties now have a smaller share of the vote, and new parties like UKIP are no longer irrelevant players.

If another party emerges that can successfully disentangle race and immigration, presenting itself as neither xenophobic nor lax on border control, Labour could be in real trouble. In 2010, the party won 79 seats with a margin of victory of less than 5 percentage points. In 19 of those seats, over a quarter of the population was non-white.5 Those seats matter; they could make the difference between being in government and being out of it. Parties that want power would do well to not neglect the voters who live in places like East Ham.

CORRECTION (May 2, 9:12 a.m.): An earlier version of this article incorrectly stated the projected national vote share for UKIP; it is 11 percent, not 2 percent.