After a long, painful, drawn-out negotiating process that never actually yielded a new agreement between owners and players, it looks like Major League Baseball is going to happen in 2020 regardless. The regular season will be 60 games, starting around July 24 and lasting a little over two months, with a standard October postseason.

Needless to say, it will be a season unlike any other in modern MLB history: Major league teams haven’t played a 60-game schedule since 1878. But does that mean it will give us a fluke champion, worthy of an asterisk? Maybe — although it’s not like a 162-game schedule delivers as much of an ironclad champ as we might think, either.

To test how often the best team wins under different schedule lengths, I set up a simulation using our Elo ratings, which estimate each team’s strength at any given moment. In the spirit of this classic piece of NFL research by Doug Drinen, I assigned each team a random Elo drawn from the actual distribution of real-life MLB ratings during the 2010s. Then I simulated the season 1,000 times, tracking how often the true best team — i.e., the one with the best underlying rating — made the playoffs and won the World Series.

In a 60-game season, with 40 games against division rivals and 20 against teams from the same division in the other league,1 the best team in baseball won the World Series just 145 times in 1,000 simulations, or about 15 percent of the time. It made the Fall Classic in only 23 percent of our simulations and made the playoffs, period, just 82 percent of the time. The eventual champion’s average leaguewide talent ranking under a 60-game schedule was 7.1 — meaning the format usually yielded a solid top-10 team as champ but not one necessarily much better than that.

[Related: Does A Short-Season MLB Champ Deserve An Asterisk?]

That sounds pretty asterisk-worthy. But how different would a regular 162-game schedule be? Using last year’s slate for reference, I ran another 1,000 simulations with the same methodology over a full-length season. In those results, the best team in baseball won the World Series 217 times, or basically 22 percent of the time. MLB’s top-rated ballclub made the World Series about 32 percent of the time, and it made the playoffs over 96 percent of the time. (The average champion’s talent ranking in a 162-game season was 5.2.) Those are all improvements — though maybe not quite as much as we might expect from nearly tripling the sample size of the regular season. 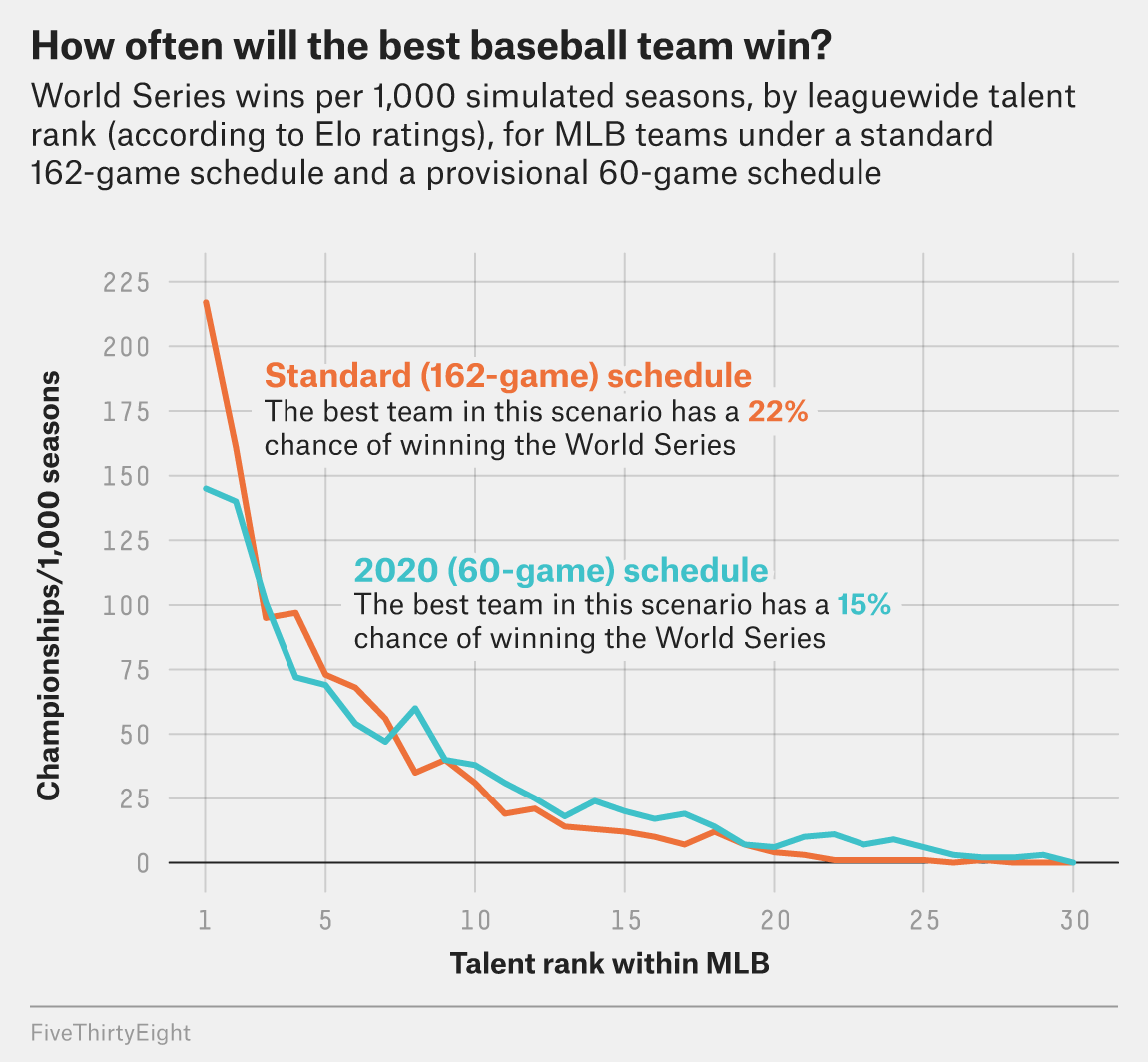 One reason 162 games didn’t provide a larger boost in certainty over 60 games is that a baseball team’s first 60 games in a season actually do give us a lot of information. When Eno Sarris of The Athletic looked into how a team’s to-date winning percentage correlates to either its rest-of-season or eventual end-of-season winning percentage, he found that the correlation rises sharply over the first 60 games before slowing down from that point onward. It’s not as though no information is gleaned from games 61 through 162, but the pace of knowledge gained per game is a lot slower.

This essentially matches up with my own research (itself based on the work of the great Tom Tango) comparing schedule lengths across sports. In MLB, the point in the schedule when a team’s record is half-skill and half-luck is around 67 games, implying that randomness overshadows talent up to that moment of the season. Whether by intent or (more likely) coincidence, MLB’s plan for the shortened 2020 schedule will at least give us the games that provide the most new information.

[Related: How Much Money Do MLB Players Really Make?]

Of course, a 162-game schedule would have been preferable (for many obvious reasons). According to my simulations above, the top seven teams in Elo talent collectively win the World Series about 14 percentage points less frequently under a 60-game slate than a 162-game one. This means teams ranked eighth through 30th win 14 percentage points more frequently under a shortened campaign, with the bulk of those gains coming for teams No. 8 through No. 15. Cinderella stories will be a lot more likely under this season’s setup, if you like that kind of thing.

Another interesting note: The difference in expected World Series odds for the best team across the two schedule lengths is driven both by how often they make the postseason and how well they do once there. Conditional on actually getting into the playoffs, the championship probability for the best team is roughly 23 percent under the traditional setup and 18 percent under the new one — this despite the playoff format staying exactly the same as usual in 2020 after the players’ union rejected a league proposal that would have included a 16-team expanded postseason. And in our pairs of seasons — one full-length and one shortened — the same team won the championship just 9 percent of the time.

So the shortened schedule will almost certainly change the course of baseball history. Whoever the true best team of 2020 is — whether it be the Dodgers, Yankees, Astros, Nationals or someone else — one big disadvantage will come in reduced playoff odds over the shortened regular season. (Essentially, the stretch run starts on opening day.) And once we’re in the postseason, it will be the same old crapshoot as always. That was true under the usual system, but it might be even more true in this deeply strange 2020 mini-season.