The Arizona Diamondbacks are off to a pretty bad start this season. In fact, it’s been downright wretched: Their 4-14 record ties them for the second-worst 18-game season opening of the past 11 seasons (since 2003, when the Detroit Tigers started 1-17).

Putting aside who or what is to blame (hint: not their Australia trip), take another look at that 4-14 record. Also note that the Diamondbacks were 4-12 through 16 games. By Major League Baseball standards, these are notably bad records. But in football, a 4-12 record happens with some frequency. Last season alone, seven NFL teams went 4-12 or worse.

Ever since the NFL expanded its schedule to 16 games in 1978 — excluding strike-shortened seasons in 1982 and 1987 — 14.5 percent of all teams have won four or fewer games in a season (throwing out teams who had ties). Similarly, over the same range of seasons (1978-present), an even 13 percent of NBA teams began their schedules with a 4-12 mark or worse.

By contrast, only 4.3 percent of MLB teams have started the season 4-12 or worse over that span. 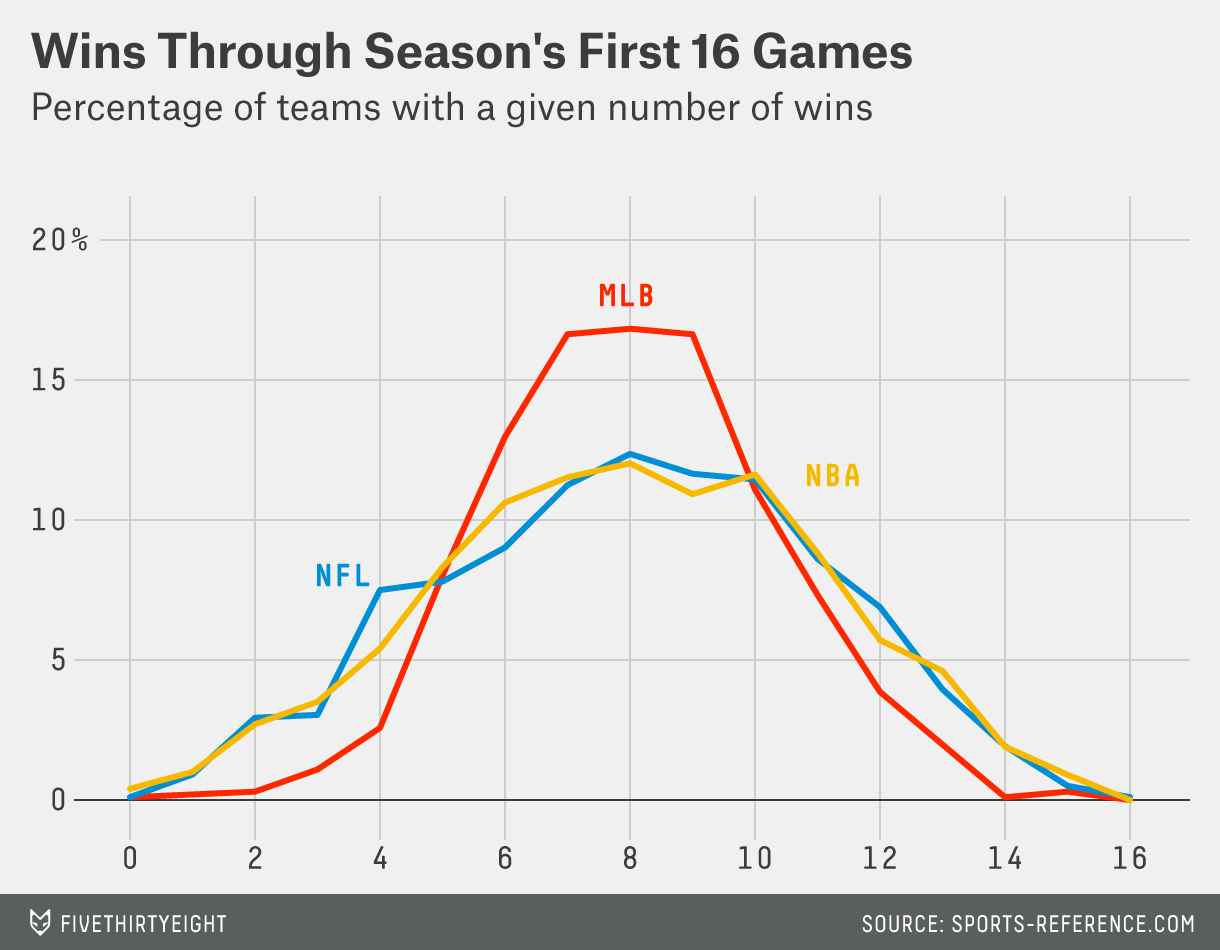 This underscores two of the major differences between baseball and other sports — the relative compression of team records and the lack of information conveyed in any single-game result. Baseball famously plays the longest schedule (by far) out of the four major North American professional sports, a 162-game sample size which naturally reduces the presence of outlier performances. But as we saw above, even within a smaller chunk of games, baseball teams have more difficulty pulling away from the pack.

This goes back to research I conducted two years ago, comparing the NBA’s season structure to those of other sports. Using an unbelievably useful methodology from arch-sabermetrician Tom Tango, I calculated the number of games necessary in each sport to regress a team’s record halfway to the mean — meaning, we’d know half of its observed outcomes were due to its own talent (while the other half results from randomness). For pro basketball and football, the numbers are similar: In the NBA, it takes about 12 games; in the NFL, 11 games. But in baseball, it takes a whopping 67 games for half of the variance in observed winning percentages to come from the distribution of talent and half from randomness.

Perhaps the best way to illustrate these differences is to use them to set up equivalent schedule lengths between sports. For instance, if the NBA wanted to convey as much information in its team records as the NFL does in its 16-game schedule, they’d have to play a 17.5-game slate. (As an aside, this underscores how incredibly long the actual 82-game NBA schedule is; in terms of information provided, it’s almost five times too long relative to the NFL.)

MLB’s 162 games provide about as much information as a 27-game football season would (meaning the NFL’s 16-game slate is the equivalent of roughly a 98-game baseball season). That’s nothing compared to the NBA, whose 82-game schedule is equivalent to a 458-game baseball season! (If the NBA wanted its standings to provide as much certainty as baseball’s, its teams would only need to play 29 games apiece.)

This matches up with what we saw in the data on 16-game starts to each sport’s season. The NBA and NFL are very similar in the spread of records in a given x-game chunk, meaning the amount of information conveyed by any result is close to being the same in each sport. But MLB is a different animal. Its long season sets it apart, but even within the season, baseball teams are bunched together much more closely than their counterparts in football and basketball.