Undrafted contributors used to be rarities in the NBA, with a few special exceptions over the years. We all remember Ben Wallace pulling down rebounds for the champion 2004 Detroit Pistons, for instance, or Udonis Haslem patrolling the paint for the Miami Heat. But the harsh reality about the league was that most (American) players had one path into it: through the draft.

Recently, though, front offices are increasingly looking for undrafted players — who, not coincidentally, happen to be on cheap contracts — to contribute. Since the 2010-11 season, the number of undrafted players in the league to have played in at least 70 percent of their team’s games has soared by 300 percent, to 40 so far this season,1 and there’s still two and a half months of the regular season left to play. 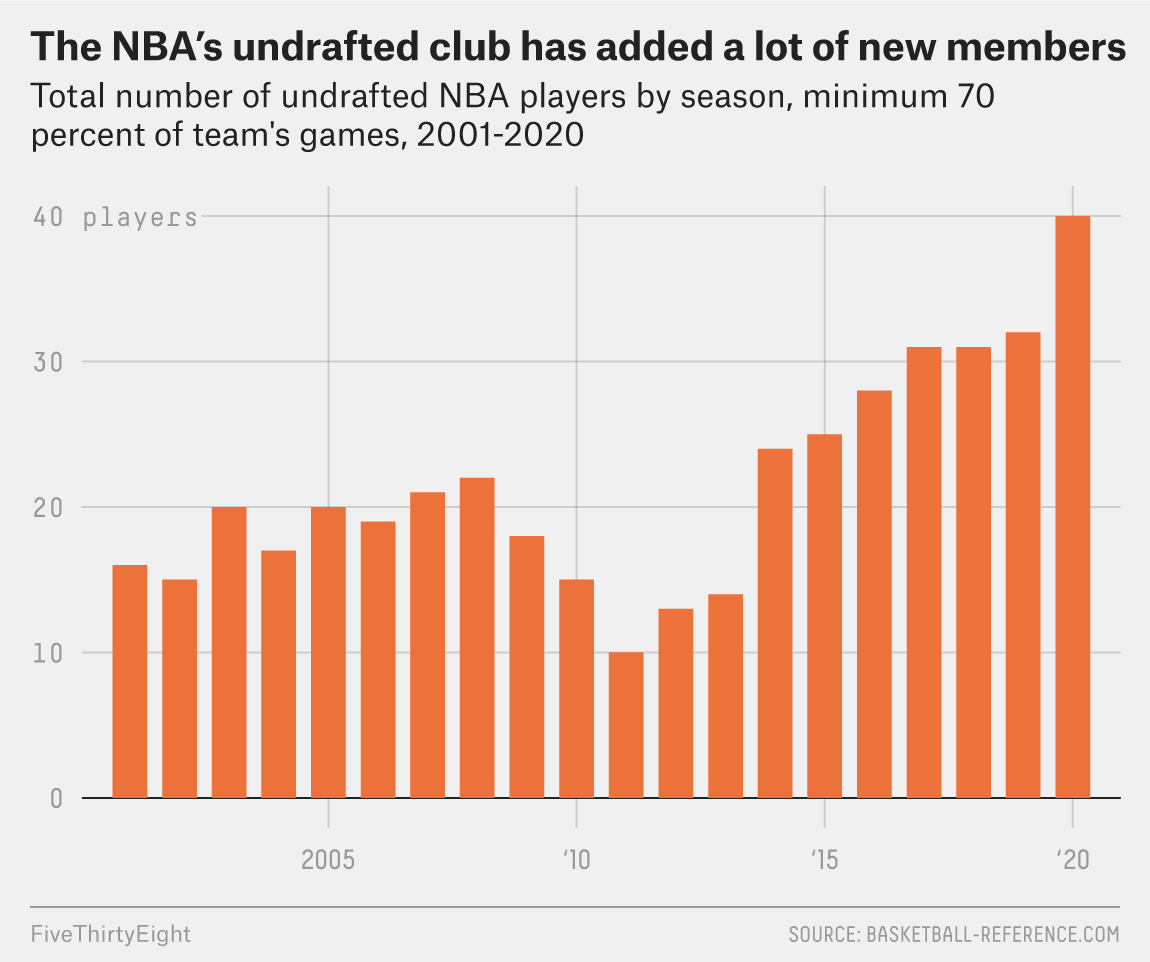 One of the teams mining this source of talent the most in recent seasons is the defending NBA champion Toronto Raptors. In fact, it was part of how the Raptors defied expectations last year to become the first team to win it all without having a player selected in the lottery on its roster.2 One of those players was Fred VanVleet, whom Raptors president of basketball operations Masai Ujiri signed undrafted out of Wichita State in 2016. VanVleet scored in double figures in eight of the final nine games of the Raptors’ historic championship run.

With Kawhi Leonard now playing for the Los Angeles Clippers, the Raptors have leaned into their undrafted-player strategy even harder this season — and positioned themselves as one of the best teams in the Eastern Conference along the way. Seven undrafted members of the 2019-20 Raptors — VanVleet, Matt Thomas, Chris Boucher, Oshae Brissett, Malcolm Miller, Shamorie Ponds and Terence Davis — have combined for 12.2 of the Raptors’ 41.1 total Win Shares so far this season.3 Davis, whom Ujiri signed out of Ole Miss this past offseason, has been especially impressive. The rookie guard is shooting 42 percent from 3-point territory and is third in Win Shares among all rookies this season, even though he somehow missed out on making the NBA Rising Stars game.

The Raptors have gotten the most overall production from undrafted players so far this season, according to Win Shares, though they’re rivaled in that category by a couple of other teams that have also exceeded expectations. With little financial wiggle room in the past couple of offseasons, the Miami Heat are another team who have made do with undrafted talent — and their confidence in it is being rewarded this season. In the 2018 offseason, the Heat signed Duncan Robinson out of Michigan after he went undrafted in that year’s draft. Then, 10 months later, Miami picked up Kendrick Nunn, who also went undrafted in 2018 before playing a season in the G League for the Santa Cruz Warriors. Through almost three quarters of the season, Nunn is fifth in Win Shares among all rookies, and Robinson is averaging 12.6 points per game and shooting 43 percent from three. In a win over the Atlanta Hawks on Dec. 10, the duo combined for 70 points.

Dallas has also been surprisingly successful, and it’s not just because Luka Dončić is putting up MVP numbers. Maxi Kleber, Dorian Finney-Smith and Seth Curry all rank among the top 10 undrafted players in Win Shares this season, making significant contributions to the Mavericks’ 35-23 record. The trio of undraftees has combined for more than 30 points in 27 different games so far this season, providing significant support for Dončić and Kristaps Porzingis. Toronto (12.2), Dallas (11.5) and Miami (10.3) are far ahead of the rest of the league in terms of wins shares from undrafted players; the next closest team is Boston with 8.1 win shares from undrafted players.

For all of his contributions so far, Nunn has caught some attention in the race for Rookie of the Year. In the 70 seasons the award has been given, no winner has ever been undrafted — but this year could be different, as Nunn currently has the third-best betting odds of winning the award. Nunn is also one of only three rookies this season — the others being Davis and Brandon Clarke — drafted or undrafted, to record at least 2 Wins Above Replacement, while also to have a positive RAPTOR on both offense and defense. Nunn is averaging 15.6 points and 3.5 assists per game and has started all 54 games he’s played in, as the Heat currently hold the fourth seed in the Eastern Conference. Yet, the overwhelming favorite thus far is Ja Morant, the second overall pick in the 2019 draft for the Memphis Grizzlies, who are currently the eighth seed in the Western Conference. If the Grizzlies hold onto that final playoff spot, Nunn’s special season might go unrewarded.

The total production of undrafted players will never eclipse that of drafted players; the best prospects go high in the draft for a reason. But it’s clear that teams are looking for cheap and capable players as much as ever, which means more chances for undrafted players to shine. As this season’s rookie standouts, Nunn and Davis have shown yet again that there is plenty of NBA-caliber talent waiting to be found outside of the draft.

CORRECTION (March 9, 2020, 4 p.m.): A previous version of the table in this article indicated that Luguentz Dort and Jordan McLaughlin were among this year’s NBA rookies who had been selected in the draft. Both were undrafted.

Daniel Levitt is a former sports intern with FiveThirtyEight. He now runs the journalism newsletter and job board Inside The Newsroom. @daniellevitt32