If you’d have told people five years ago that the Wichita State men’s basketball team would be a national contender in 2017 with a chance to return to the Final Four, they’d have laughed you out of the room. The Shockers were stuck in the mid-major Missouri Valley Conference, which sent just one team to the tournament per year from 2008 to 2011, and had recently made only their second tournament appearance in the past 24 years. On a national level, the Shockers were more famous for their nightmare-fueling mascot: a bound bundle of wheat that wears a black turtleneck.

But as it turns out, the Shockers have been one of college basketball’s biggest surprises over the past five years, making the tournament every season and going all the way to the Final Four in 2013 as a No. 9 seed. This season, the Shockers are 6-1 after knocking off No. 16 Baylor on the road over the weekend, are ranked No. 6 in the AP Top 25 poll, and are frequently mentioned as favorites to make the Final Four.

It’s not unheard of for a mid-major to make noise in March. And there’s a reason we call these teams Cinderellas: They transform back to normal when the ball is over. Davidson largely drifted into obscurity after Steph Curry led the Wildcats to the Elite Eight as a No. 10 seed in 2008. And the Patriots of George Mason haven’t been relevant since they made the Final Four in 2006. The Shockers seem to be the exception, though — they are still wearing their fancy gowns well past midnight. In the past five years, Wichita State has become one of the nation’s premier teams and in the tournament has beaten basketball powerhouses Kansas, Arizona and Indiana.

There’s only one former Cinderella to pull a similar trick: the Gonzaga Bulldogs. Wichita State’s recent run — the most successful period in its history — is reminiscent of the path that Gonzaga took after it made its first Elite Eight in program history in 1999. Mark Few took over as head coach of the Bulldogs a season later, and since then, Gonzaga has regularly been among the game’s elite. It appears that Wichita State has joined it. According to the Elo ratings — which are a measure of a team’s quality that take into account factors such as margin of victory, game importance and game location — of all Division I teams excluding those from the top six conferences (the ACC, Big Ten, Big 12, Big East, Pac-12 and SEC), the Shockers have joined the Bulldogs among the elite mid-major teams in the nation. 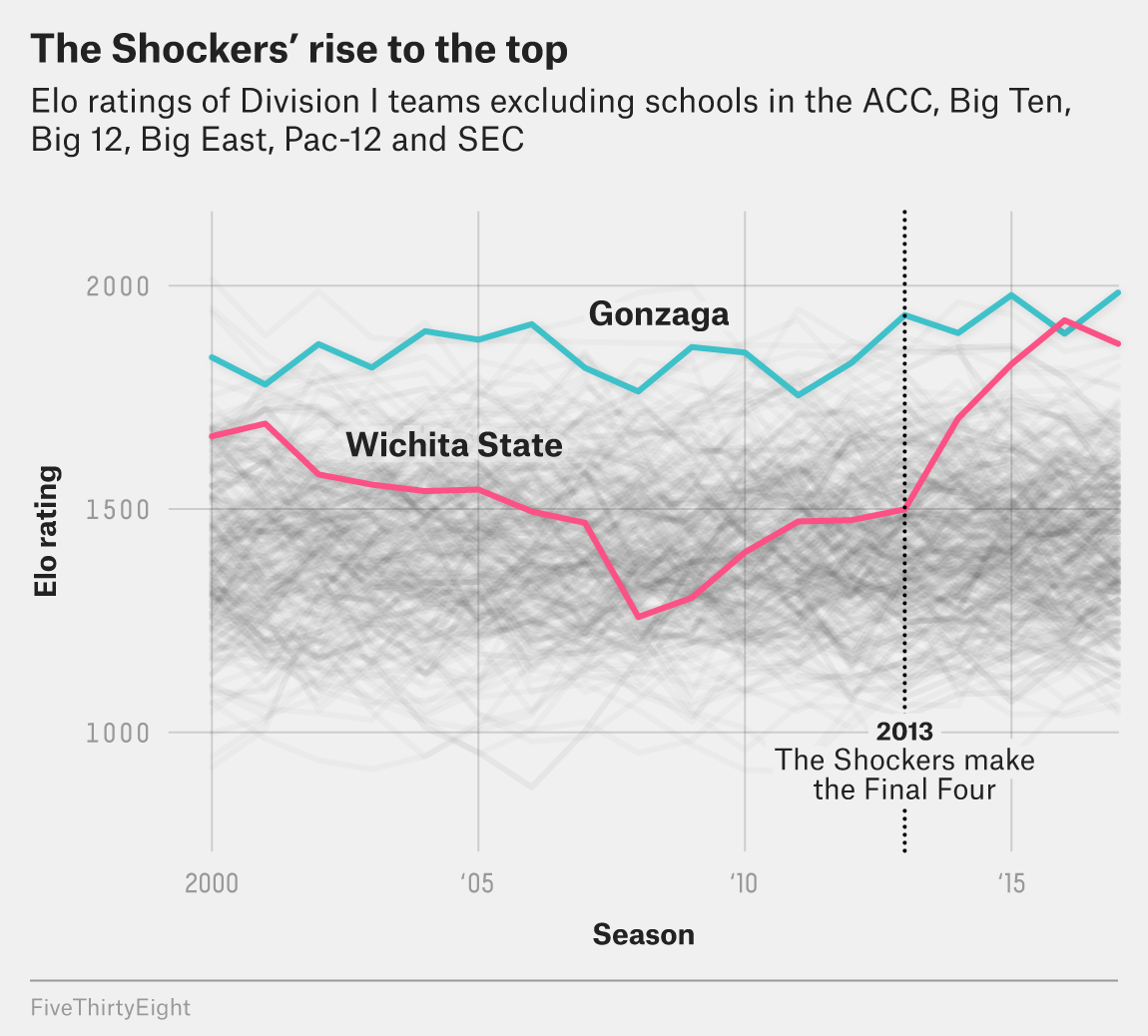 One reason for their recent successes may be that they both have piled up the wins playing in relatively weak conferences. Like the Missouri Valley Conference, Gonzaga’s West Coast Conference typically only sends one or two teams to the tournament a year. So Wichita State and Gonzaga regularly faced off against the likes of Evansville and Pacific. But this season, Wichita has switched to the American Athletic Conference, which will dramatically improve the Shockers’ strength of schedule — the American is currently ranked No. 7 in conference strength, while the Missouri Valley is ranked No. 9, according to data compiled by Ken Pomeroy. This might not sound like much of an improvement, but when the NCAA’s selection committee chooses its field for the tournament, the Shockers’ chances of securing a top seed on a regular basis are likely to increase significantly.

There is one player who’s unsurprised by his alma mater’s recent success. In his four years at Wichita State, Fred VanVleet was twice named the Missouri Valley Conference player of the year and was the engine behind the team’s successful run. Now a member of the Toronto Raptors, VanVleet sat in the locker room at the TD Garden in Boston last month — after his team’s 95-94 loss to the Celtics — and reminisced about the momentum he helped create at Wichita State.

“We built that up to what it is,” VanVleet said. “Once you go to the Final Four once, that’s one of the highest things you can do. It’s starting to become regular ’round there.”

Even after VanVleet had achieved so much in the college game, the odds were against his making the jump to the NBA, because the league is dominated by players from blue bloods such as Kentucky and Duke. Raptors general manager Bobby Webster was aware of VanVleet’s success with the Shockers, but he said that it was his mental toughness that impressed him most — his ability to not get too high when things were going well and not too low when things turned south.1 In 2016, those intangibles earned VanVleet a contract with the Raptors after he went undrafted only a few weeks earlier. After playing just eight minutes a game in his rookie year, VanVleet has doubled his game time this season and currently leads the NBA in net efficiency rating.

Although the debate rages on between whether recruiting “one-and-done” or four-year players brings more success in the tournament, Wichita State coach Gregg Marshall has had little choice of which strategy to follow. Surrounded by the large college campuses of Kansas, Missouri and Oklahoma, Wichita State isn’t considered a college destination among the top high school recruits in the Midwest. That’s one reason why Marshall hasn’t landed a top-25 recruiting class (according to ESPN) since he’s become head coach of the Shockers. Instead, Marshall has banked on undervalued recruits and transfers. The lack of recruiting leverage was one of the reasons that had Marshall on the verge of leaving Wichita to join Alabama, a program with far more resources and a bigger name with which to recruit.

Marshall decided to stay, however, and has continued to find a way around his recruiting challenges. To keep his program among the game’s elite, he’s relied on developing players over several years, as opposed to leaning on the incoming crop of freshmen each season. According to data from Ken Pomeroy, Wichita State ranks No. 8 in the country in team experience (the average number of years a team’s players have been in the program) and 11th in the country in team continuity (how much of a team’s minutes are filled by returning players).

This year’s team is led by seniors Zach Brown and Shaquille Morris, who have been stalwarts in the lineup for the past four years. Sophomore guard Landry Shamet was a preseason Blue Ribbon All-American and is next in line to take the reins. Yet, none of these players were sure things when they got to Wichita State, nor are they the type of players NBA teams line up to draft as teenagers. But the recruiting obstacles that the Shockers face might not mean anything as long as Marshall is at the helm.

“Recruiting is overrated,” VanVleet said. “We put so much stock on where kids are when they’re 15, 16, 17. You just gotta look for certain characteristics, and [Marshall] finds guys who work, who are tough.”

Daniel Levitt is a former sports intern with FiveThirtyEight and is now a data journalist at The Guardian. @daniellevitt32