A bombshell poll from Quinnipiac University sent the political world into a tizzy on Wednesday when it showed Joe Biden leading President Trump 52 percent to 37 percent nationally. While it’s been well documented for a while now that Biden is solidly ahead of Trump in the polls, could the Democrat really be up by 15 points?!

No other poll has given Biden that big of a national lead all year, so that’s one reason it grabbed so much attention. But as we’ve warned you in the past, don’t overreact to outlier polls like this one. Even high-quality pollsters like Quinnipiac (which uses the gold standard of polling methodology and has historically been very accurate) produce outliers sometimes, and that’s OK. In fact, it’s better than OK — it’s a sign that they are not cooking the books, as polls are supposed to disagree somewhat, statistically speaking, due to things like sampling error.

But in part because they point in opposite directions, even after you account for these two outlier polls, the bulk of this week’s polling data tells the same old story: Biden leads nationally by around 8-11 percentage points among registered voters.

Take what other national polls this week found: A Yahoo News/YouGov poll gave Biden an 8-point lead. A Reuters/Ipsos poll had him up by 10. The Economist/YouGov found him up by 9. An NBC/Wall Street Journal poll put him ahead by 11. Morning Consult had him winning by 8.

Swing-state polls of likely voters painted a similar picture. Another CBS News/YouGov poll, of light-red Florida, gave Biden a 6-point lead. Another Arizona poll, by OH Predictive Insights, had Biden up by 5. A CNBC/Change Research poll of several swing states was consistent with a national Biden lead in the high single digits. And finally, Monmouth University, the highest-quality pollster to release a state poll this week, found Biden ahead by 10 points in Pennsylvania according to a high voter-turnout model and ahead by 7 points according to a low voter-turnout model.

Put it all together, and Biden currently1 leads Trump by an average of 9.1 percentage points, according to the FiveThirtyEight national polling average, which isn’t all that different from Biden’s lead one week ago (9.6 points) or even one month ago (9.3 points). 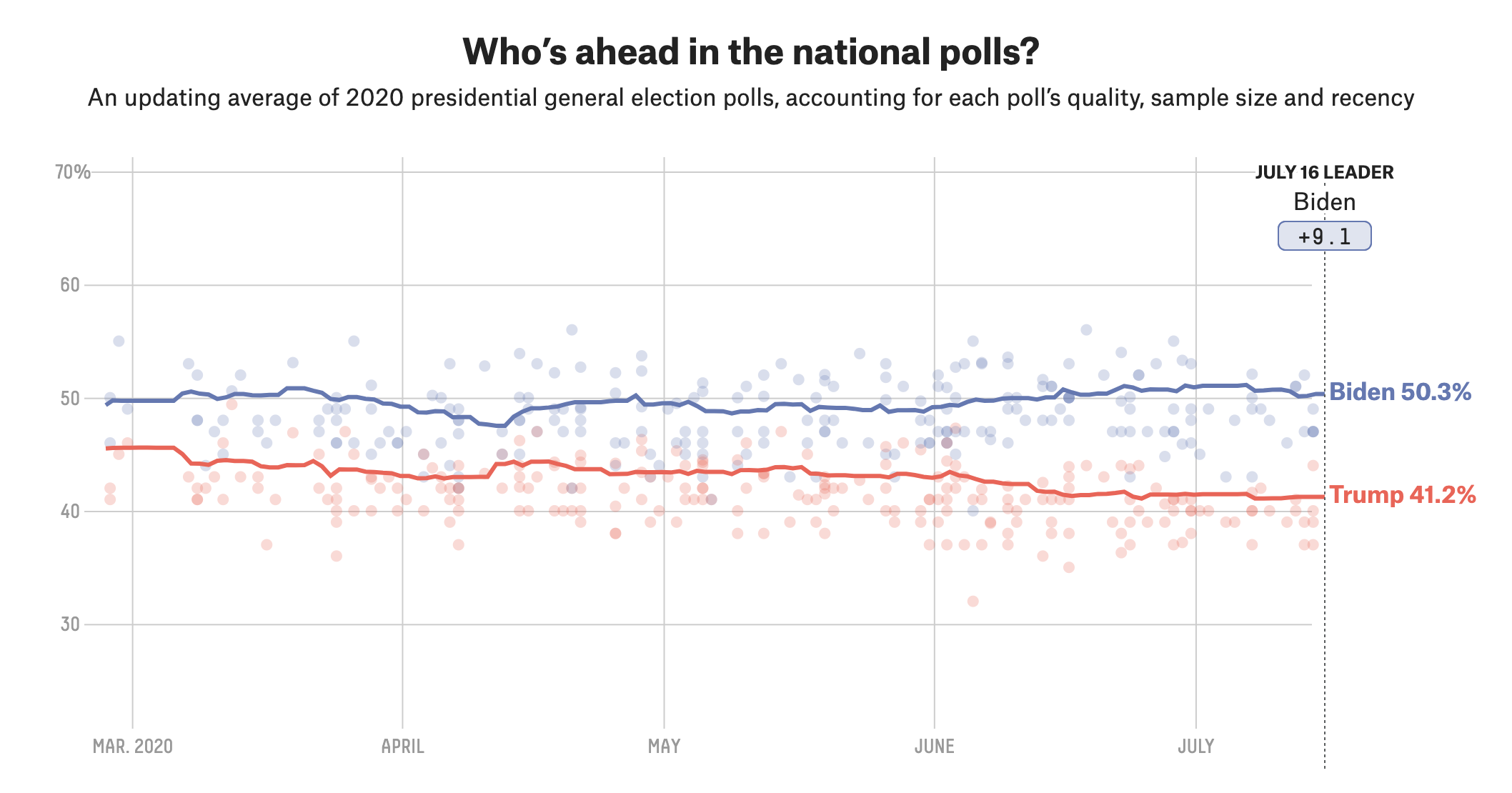 Simply put, since the protests against police violence appeared to erode Trump’s standing at the beginning of the summer, there hasn’t been a lot of action in the race. The campaign is not dominating the headlines, and Trump’s handling of the pandemic — which is dominating the headlines — hasn’t improved in Americans’ eyes. However, the party conventions start in one month, and we can probably expect the presidential campaign to command people’s attention between then and November, pandemic or no.

And, of course, developments in the coronavirus crisis — or some other breaking news story that we can’t predict yet, like a scandal — could cause voters to view the candidates in a different light. While Biden’s current lead is robust enough to withstand even a major polling error, there are still three and a half months left for the polling to change.