The race between President Trump and Joe Biden is verging on a landslide. That’s not a word we use lightly.

Over the past month, Biden’s lead over Trump has been both incredibly stable and unusually large. Amidst Trump’s unpopular handling of the protests that followed the police killing of George Floyd, Biden’s lead has hovered within a tight band of 8.9 to 9.6 percentage points since mid-June, according to FiveThirtyEight’s national polling average.1 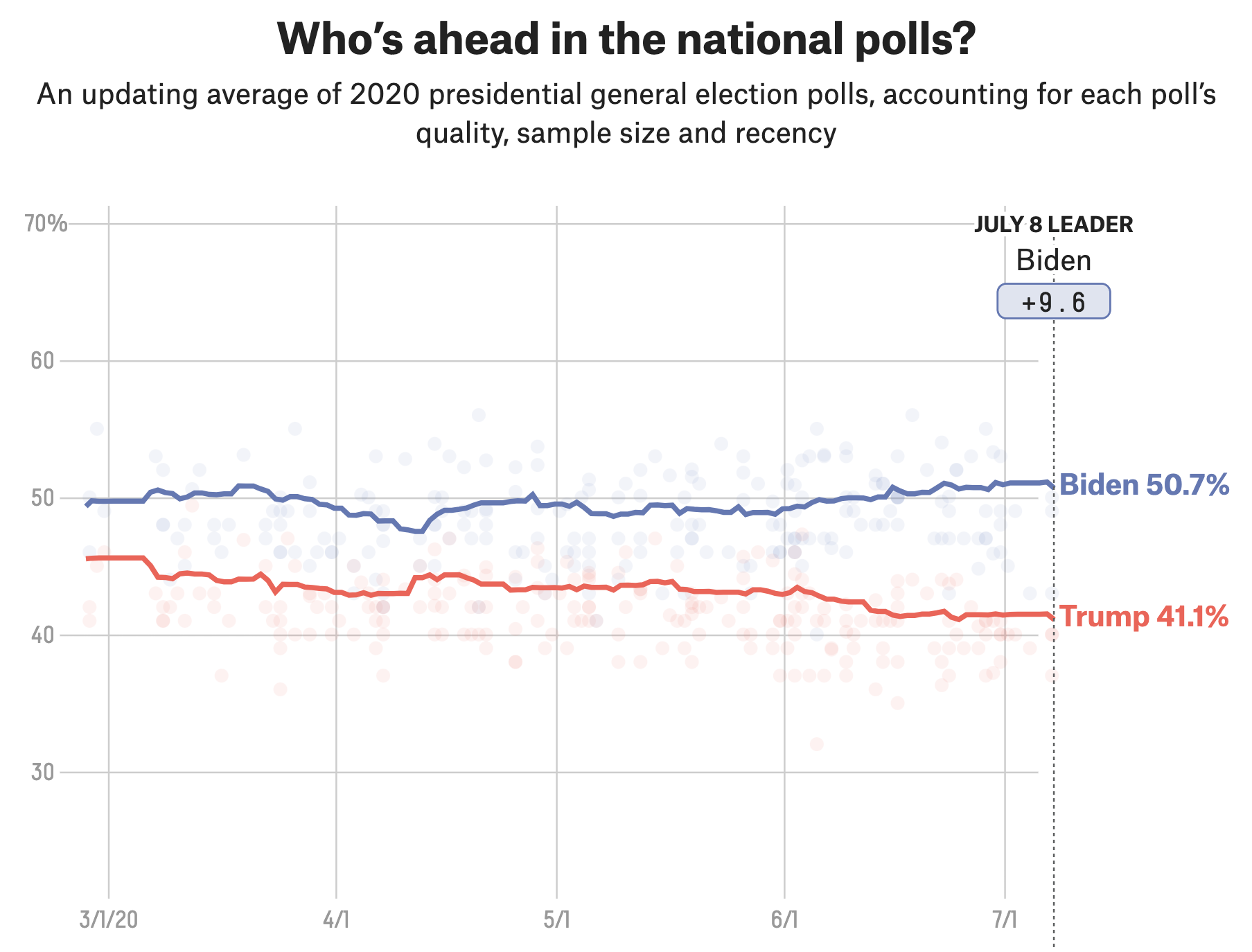 This is a sizable enough lead that Trump’s reelection chances are in a precarious position. Take what CNN analyst and FiveThirtyEight alum Harry Enten found earlier this month when he looked back at presidential elections where an incumbent was running since 1940. He calculated, on average, a 7-point difference between the final national popular vote margin and the polls conducted four months out. That might sound like a lot of movement — and it is — but the problem for Trump is even if the polls swung toward him by 7 points, he would still trail Biden by about 2 to 3 points nationally. The median difference Enten found, 4.5 points, would leave Trump in even worse shape.

Of course, if the polls did swing 7 points in Trump’s favor, leaving him only 2 to 3 points behind Biden nationally, Trump could still win — after all, he won in 2016 despite losing the popular vote by about 2 points. But this isn’t an easy reelection path, particularly if Biden’s lead holds.

Additionally, Trump got a few favorable polls in Florida and Pennsylvania. In surveys conducted just before the Fourth of July, Trafalgar Group found Trump tied with Biden in Florida and trailing Biden by just 5 points in Pennsylvania. That might not sound like particularly good news for Trump in Pennsylvania, but considering Biden’s average lead there is more than 7 points, anything that shows that lead waning is a win for Trump. However, the fact that Trafalgar is a Republican pollster with a slight bias toward the GOP isn’t great news for Trump, as in many ways these polls offer his best-case scenario, and that scenario still isn’t very good. It has Trump either barely breaking even (Florida) or still underwater (Pennsylvania).

Elsewhere, state-level polls didn’t offer Trump much of a silver lining. Democratic pollster Public Policy Polling found Biden up by 17 points in Colorado, which Trump lost by 5 points in 2016, and ahead by 11 points in Maine, which Trump lost by just 3 points last time. The pollster has a slight Democratic bias, but Biden’s lead in these polls are sizable enough to suggest that Trump will have a difficult time competing in these states.

In fact, although the battleground states skew slightly more Republican than the nation as a whole — as you can see in the table below — Biden continues to lead in nearly every one of them, including places like Georgia, which The Cook Political Report just moved into its “toss-up” category. If Biden won all the states that the election handicapper rates as solidly or slightly Democratic, it would now give him more than 270 electoral votes because of his advantage in these key states.

As always, there’s still time for the electoral environment to shift in Trump’s direction and narrow his polling deficit. The national party conventions and Biden’s vice presidential pick are big events that could still change the race, and there’s always the possibility that some unexpected news will break between now and November. But unfortunately for the president, recent polls have shown simply more of the same — he’s treading on thin electoral ice.