UPDATE (June 16, 11:13 a.m.): The Blackhawks won the Stanley Cup on Monday night, confirming their status as a modern dynasty.

The Chicago Blackhawks will take the ice tonight for the chance to win their third Stanley Cup in six seasons. For NHL fans whose memories stretch back to the 1970s and 1980s, such a feat might not seem all that impressive. The NHL was once extremely friendly to dynasties: The Montreal Canadiens won four consecutive Stanley Cups from 1976 to 1979, the New York Islanders did so from 1980 to 1983 and then the Edmonton Oilers won five Stanley Cups in seven seasons from 1984 through 1990.

In the series of charts below, I’ve tracked the share of NHL, NBA, NFL and MLB champions who were repeat winners, along with the share who had won at least one title in any of the three previous seasons.1 These trends can also ebb and flow over time. After the Boston Celtics won 11 championships in 13 seasons from 1957 through 1969, the NBA then went 19 seasons without a repeat champion until the Los Angeles Lakers did it in 1987 and 1988. Since this data can be a bit noisy, I’ve stretched it over a fairly long time frame, showing trailing 20-year windows for each sport. 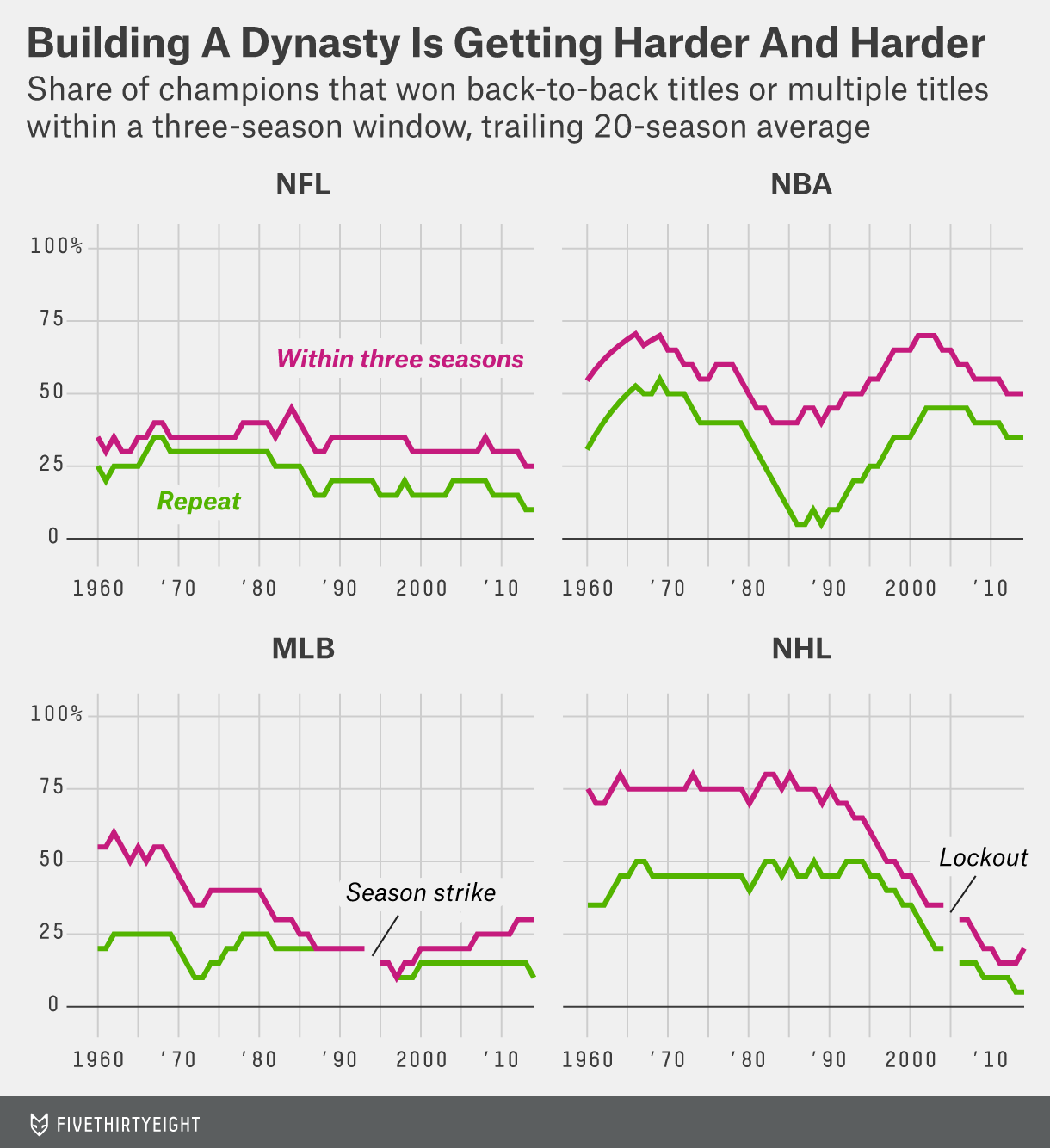 Over its past 20 seasons, the NHL has the lowest share of repeat winners among the major sports leagues — the Red Wings in 1997 and 1998 were the only one — along with the lowest share of teams to repeat within a three-season window (four out of the past 20 Stanley Cup champions did so). By contrast, before about 1990, it was probably the easiest sport for repeat winners. From 1971 to 1990, for instance, 45 percent of Stanley Cup winners had also won the championship in the previous season, and 75 percent had won a Stanley Cup within the previous three years.

The reasons for this are obvious enough: The NHL has expanded rapidly, from six teams in 1966-67 to 30 teams today. It implemented a hard and unforgiving salary cap in 2004-05. And it’s a fairly random sport: Compared with something like basketball, the best team won’t necessarily prevail, even over a seven-game series.

Still, the differences are striking. Given the difficulties of keeping a team together in the modern NHL, winning three championships within six years, as the Blackhawks will do if they can finish off Tampa Bay, would perhaps be no less impressive a feat than what the Islanders did by winning four in a row, for example. And they’ll have done it with largely the same group of talent. Nine of the Blackhawks’ top 10 players by point shares this season, including Duncan Keith, Patrick Kane and Jonathan Toews, were also members of the franchise in 20102; the only exception is left wing Brandon Saad, who had not yet been drafted.