In a day without marquee matchups in Brazil, the World Cup game that is most likely to feature two knockout-stage teams also projects to be the biggest blowout. France vs. Ecuador is the best of an uninspiring lineup. The match that could decide who advances in Group E will feature the tournament’s most-explosive offense. 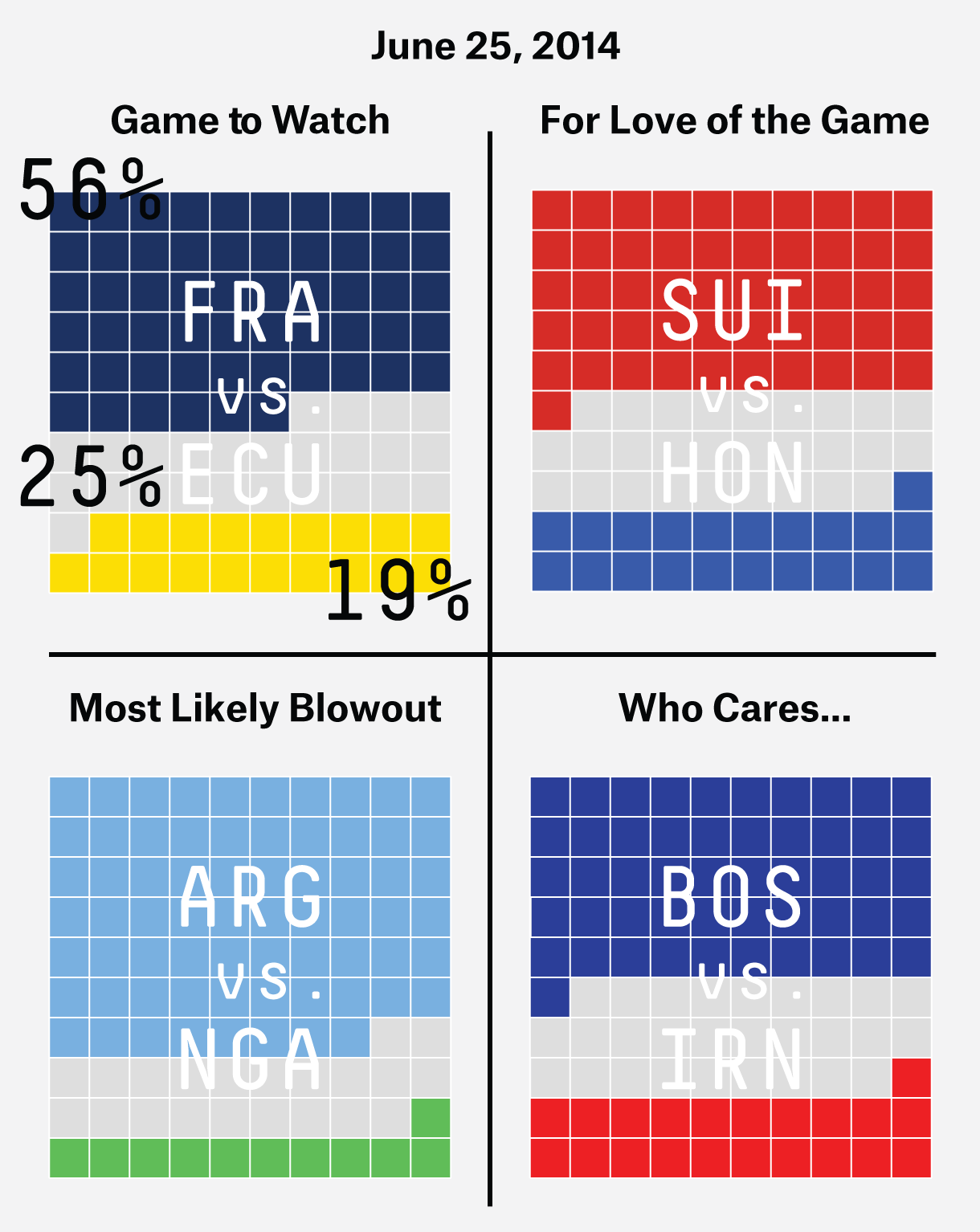 France has been peppering opponents’ goals: It leads the tournament in per-match rates of goals and shots on target from within the area. Karim Benzema leads all players with nine such shots, a relentless performance that could earn him a big raise from Real Madrid to ward off other teams.

France also played one of the easiest schedules of any team at the tournament. Its two opponents so far rank in the bottom 13 of the 32 World Cup sides in ESPN’s Soccer Power Index, and in the bottom eight in defensive rating. Ecuador is no defensive stalwart, ranking right at the tournament average, but Honduras and Switzerland make it look like a steel trap.

Not much is at stake for France here: It has essentially clinched a spot in the knockout stage and has a 99.7 percent chance of winning the group, thanks to its mammoth lead in goal differential. Ecuador, though, has work to do. It’s level with Switzerland at three points, and though it has the edge in goal differential, it also has the tougher opponent Wednesday. If Switzerland wins, Ecuador will have to upset France to have a chance to advance.

The early games include a matchup between the top two teams in Group F, Argentina and Nigeria. The harmonic mean of these two teams’ SPI is slightly higher than for France and Ecuador. But Argentina is so much better by SPI than Nigeria that the match also projects to be the day’s biggest blowout.

A tie would be mutually beneficial for Argentina and Nigeria. Argentina would guarantee itself a spot atop the group; that’s especially valuable because it will face the runner-up in Group E, and that team will probably be much weaker than the winner, which almost definitely will be France. A tie would also mean Nigeria clinches second in the group, knocking out Iran.

There is precedent for thinking that when two teams meeting in the last match of the group stage can both benefit from the same outcome, that outcome will happen. It happened in 1982, when West Germany beat Austria by a 1-0 score in a match that turned farcical in front of fans who called out “fix.” And it happened at the Euros in 2004, when the 2-2 draw Denmark and Sweden needed to advance and knock out Italy materialized. Two teams can arrive at a mutually desired outcome without any planning, simply by playing until they reach that score and not pushing hard afterward.

Bettors haven’t taken into account the mutual incentive for an Argentina-Nigeria draw. The consensus probability of a draw on the betting sites whose odds are compiled by Oddschecker.com was 21 percent Wednesday morning, which is also SPI’s estimate. There’s a much bigger difference for Thursday’s U.S.-Germany match, another game in which a draw would aid both teams. There, the SPI-based model says there is a 22 percent chance of a tie, while bettors think there is a 33 percent chance.

Wednesday also marks the end of South America’s group stage. All six of the continent’s World Cup teams will go through to the knockout stage if Ecuador’s day goes well. CONMEBOL could even win four of the eight groups if Argentina does the expected and wins Group F, and Ecuador accomplishes the nearly impossible and wins Group E.

Amid the controversy surrounding Uruguay’s Luis Suarez, his team defeated Italy 1-0 to advance to the Round of 16, where Group C winner and fellow CONMEBOL member Colombia awaits.
The winning goal came from Diego Godin, who scored for his country for the first time in his last 72 matches, dating to Oct. 18, 2006. But Godin is no stranger to big goals lately; he scored the goal on the final day of the La Liga season to clinch the title for Atletico Madrid, and he scored the first goal in the Champions League final for Atletico.

Godin scored the winner with his head, continuing a trend. All eight of his goals for Atletico this season were headers, and six of the eight came from set pieces, as was Tuesday’s.

The turning point for the match came after Italy’s Claudio Marchisio received a red card in the 59th minute. Through the 59th minute, Uruguay had created two chances and had nine touches in the attacking penalty area. From the 60th minute on, the Uruguayans had eight touches in the box and created five chances, one of which led to the winning goal

Though Suarez’s most notable action may have been with his teeth, he also contributed with his feet, posting match highs with six shots and four shots on target. He also was tied for first among all players in chances created (two) and attacking penalty-area touches (three). — Jacob Nitzberg, senior stats analyst, ESPN

From their partnerships on energy and job creation to their pacts on prisoner exchange, Nigeria and Argentina have gotten closer in recent years. This increasingly friendly relationship is reflected in trade as well. According to OECD data, exports from Argentina to Nigeria have increased significantly from 2009 (in which total exports were worth $59 million) to 2012 (total exports were worth $289 million), the most recent year for which data is available. This is surprising given that the share of higher-value exports, such as machinery, decreased in this span. But it seems that the exports of wheat, maize and soybeans (62 percent of exports to Nigeria in 2012) have grown more than enough to compensate.

Trade in the opposite direction doesn’t tell quite the same story, with Nigerian exports to Argentina dropping from $204 million in 2011 to $56 million in 2012. But even that number is a remarkable increase from the $931,000 in exports that Nigeria sent Argentina in 2009. The main cause for the overall rise is the incorporation of liquefied petroleum gases into the countries’ trade agreement in 2011. This new export was so dominant that it caused the previous main export, natural rubber, to diminish from a 72 percent share in 2010 to a 0.8 percent share in 2011. — Hayley Munguia