Switzerland and Ecuador have a lot on the line, however. So does Nigeria, which is favored to advance but could fail to do so if it loses to Argentina and Iran beats Bosnia and Herzegovina. There’s even a possibility that FIFA could have to draw lots to determine whether Nigeria or Iran moves on. Let’s focus on Nigeria’s Group F first, which will kick off its final games Wednesday at noon Eastern time: 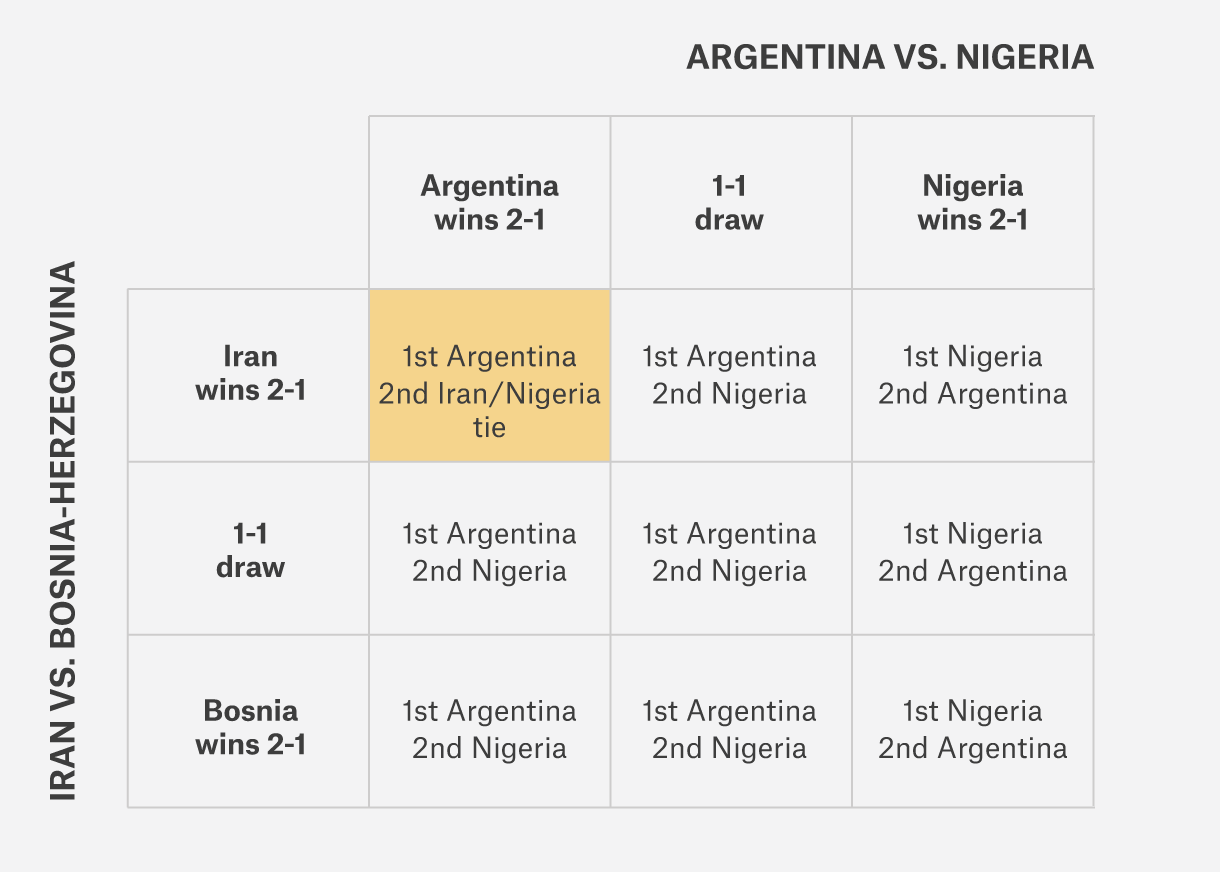 Most scenarios in Group F are simple. Argentina will advance in first place if it beats or draws Nigeria, or as the second-place team behind Nigeria if it loses to it.

Nigeria is an 88 percent favorite to advance in some capacity, according to the FiveThirtyEight forecast. The only way it could fail to do so is the case I mentioned: if it loses to Argentina while Iran beats Bosnia. That scenario could get messy.

Say that Iran beats Bosnia 2-1 while Nigeria loses to Argentina by the same 2-1 scoreline. Both teams will have one win, one draw and one loss. Both will have two goals scored and two goals allowed. FIFA’s next tiebreaker is head-to-head results, but Nigeria and Iran drew their match. That means FIFA would be out of tiebreakers and forced to draw lots to determine who advances.

Mind you, this situation is unlikely. Iran is probably a weaker team than Bosnia and has only a 21 percent chance of beating the World Cup newcomer. Also, anything but the same scoreline in the two Group F matches would give FIFA some other way to resolve the tie. For example, if Iran won 2-0 and Nigeria lost 1-0, Iran would have the better goal differential and would advance. If Iran won 1-0 and Nigeria lost 2-1, the teams would be tied on goal differential but Nigeria would advance on the basis of goals scored. The chance that FIFA will have to draw lots is only 0.6 percent, according to our match predictor.

An even bigger longshot than that scenario is if France failed to advance from Group E. Let’s look at the situation there: 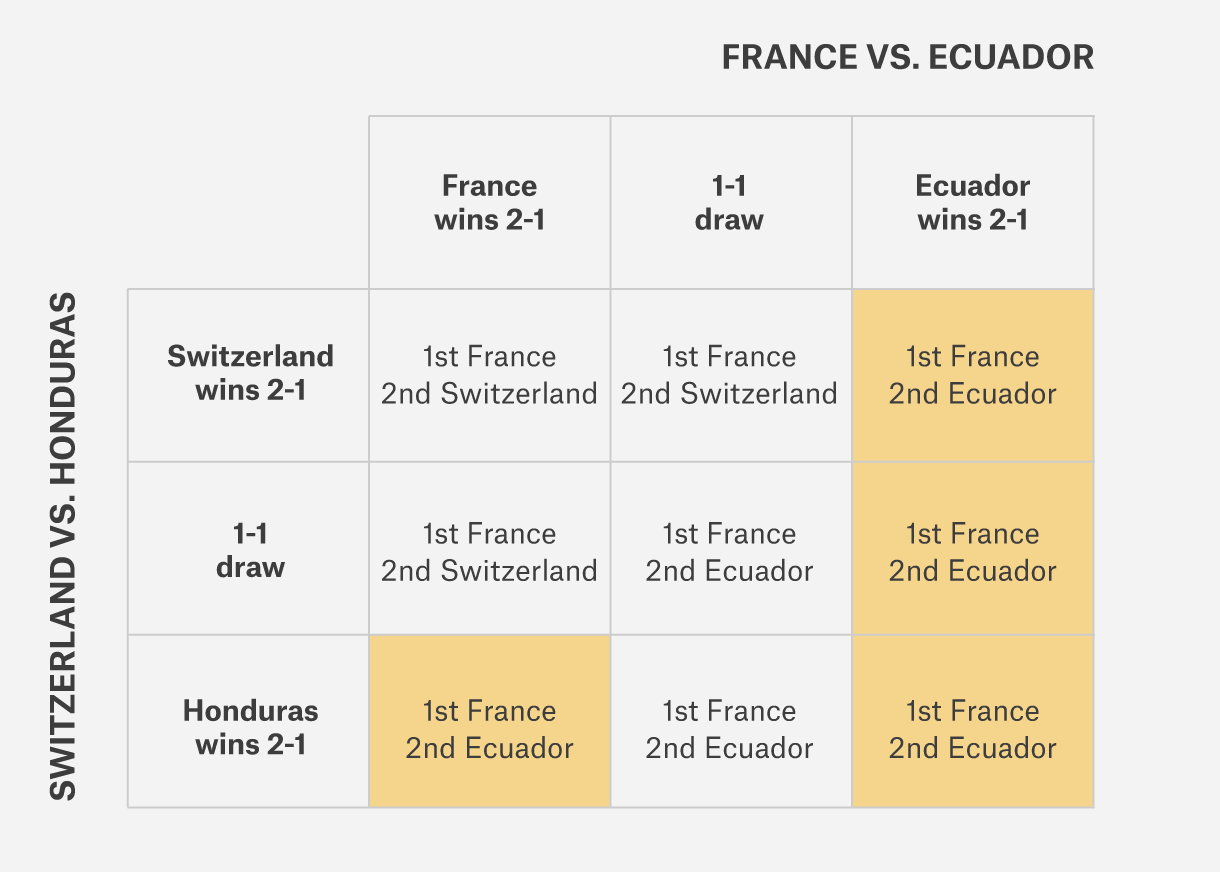 The FiveThirtyEight forecast lists each team’s advancement probability to the first decimal point and describes France’s chances at 100.0 percent; if we added a decimal place, they’d be 99.98 percent instead. The only way this extraordinarily unlikely scenario could come into play is as follows: France loses to Ecuador. Switzerland beats Honduras. Then France, Switzerland and Ecuador are tied atop Group E with six points each.

This scenario is not all that unlikely: There’s a 10 percent chance that both Switzerland and Ecuador will win their matches. But France would also have to finish last among the three teams in the goal-differential tiebreaker. There’s almost no chance that will happen; France’s goal differential is +6 so far, while Ecuador’s is even and Switzerland’s is -2.

But Switzerland and Ecuador’s advancement prospects are more complicated. Switzerland is guaranteed to advance if:

Ecuador is guaranteed to advance if:

Other cases, like the one where Ecuador and Switzerland both win, will go down to a tiebreaker.

There’s even an outside chance (about 2 percent) for a three-way tie, in which Honduras could advance. That would require both Honduras and France to win — in which case Honduras, Ecuador and Switzerland would be tied for second with three points each. Honduras would then need to win on the tiebreaker. That would probably require them to beat Switzerland by at least two goals while Ecuador takes a multi-goal loss to France.

CORRECTION (June 25, 9:39 a.m.): An earlier version of this post incorrectly described the scenario of Iran beating Bosnia 2-1 and Nigeria losing to Argentina by the same 2-1 scoreline.