After thrashing Portugal 4-0 in its first game, Germany has seen its probability of winning the World Cup steadily rise, to 13.4 percent from 10.7 percent. That increase is more than any team’s since the tournament began, except the Netherlands’. The Germans face Ghana in the second game of the day. 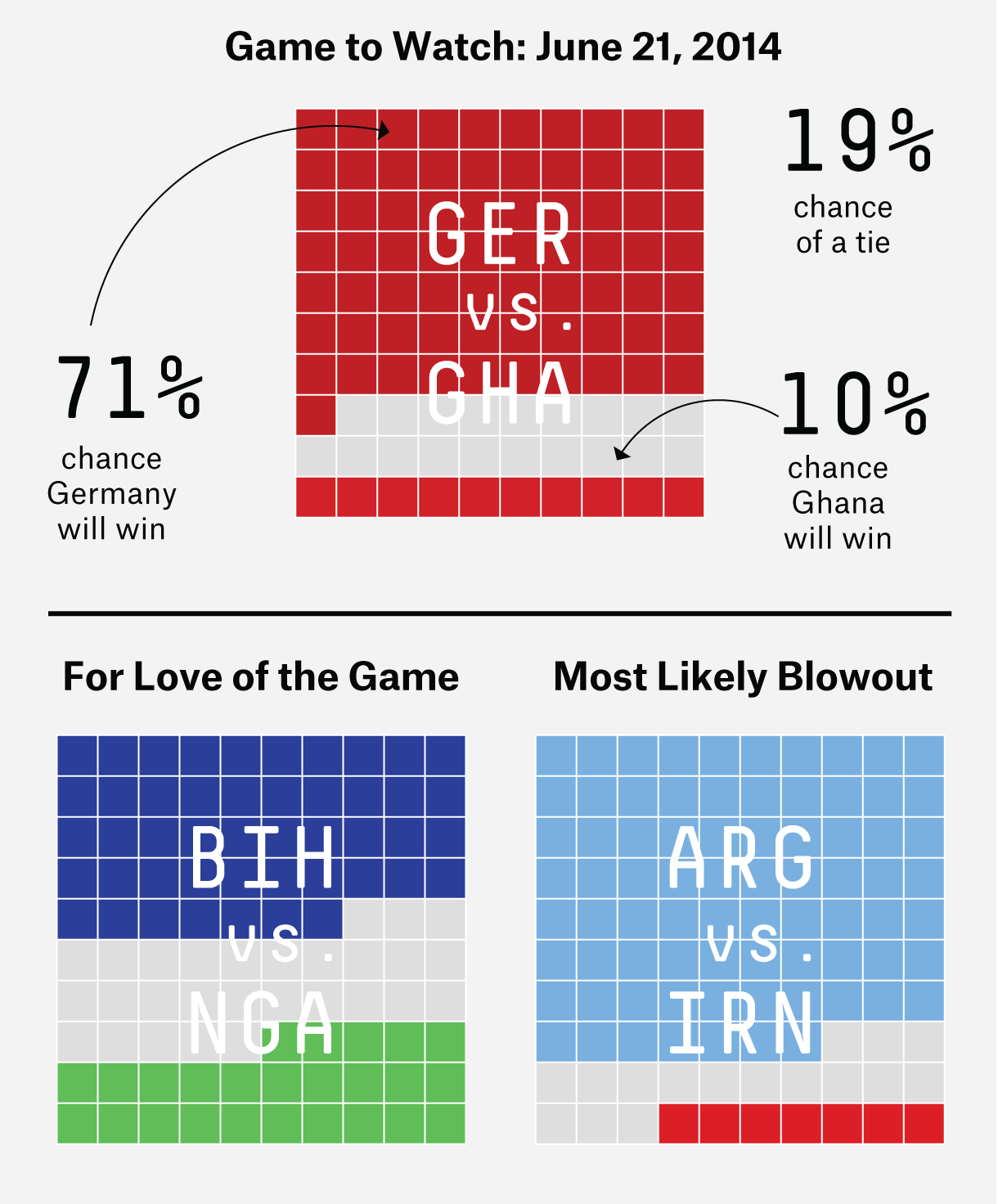 The odds are stacked in favor of Germany (71 percent to Ghana’s 10 percent) in our Game to Watch, so Ghana will need an unlikely win or draw against if it has any hope of seeing the knockout stage of the tournament. Germany is sitting pretty atop Group G with a 97.9 percent chance of advancing.

Despite the apparent mismatch, Germany and Ghana still had the highest harmonic mean between the Soccer Power Index (SPI) scores of any two teams playing each other Saturday (82.0, compared with Argentina vs. Iran at 78.4 and Bosnia-Herzegovina vs. Nigeria at 76.9). Both Germany and Ghana are powerful defensively, but it’s Germany’s offense — the strongest in the tournament, according to ESPN’s SPI — that poses the biggest threat to Ghana.

Ghana outplayed the U.S. on Monday, controlling 60 percent of the possession and outshooting (both on goal and otherwise) the Americans in a game that probably should have ended in its favor. But of its 21 shots, only one managed to find the back of the net. So, if Ghana hopes to dig itself out of the hole it’s in in Group G, it must score against Germany. Its best hopes lie in the Ayew brothers — Andre scored in the 82nd minute against the U.S., and his younger brother, Jordan, has scored 16 goals for Sochaux in the top French league this season.

Ghana has a 89 percent chance of being eliminated from the Cup, but a win or draw against Germany and an unfavorable outcome for the Americans against Portugal on Sunday could drastically change the dynamics of Group G.

Costa Rica also shut down two of Italy’s biggest stars. Andrea Pirlo completed one of four passes in the attacking third; he was 12 for 12 on such passes in Italy’s first match, against England. Mario Balotelli had 24 touches, the fewest of any Italian starter, including seven in the second half. That tied for the fewest of anyone on the pitch.

In the match between Switzerland and France, Switzerland had more overall touches, 636 to 532, but France more than doubled the Swiss in the attacking penalty area, 23 to 10. Led by Karim Benzema, whose match-high seven touches in the penalty area gave him a tournament-high 16, France is averaging 25.5 penalty-area touches per match (the best in the tournament).

France scored in the 17th and 18th minutes with two of its first three touches in the attacking penalty area — the quickest back-to-back goals in French World Cup history. The first goal was France’s 100th at the World Cup, making it the fifth team to reach that milestone. Benzema had a goal and two assists, giving him a hand in five of France’s eight goals in the tournament (three goals, two assists). He created six chances Friday, the most by a player in a match to that point in the tournament. The two teams combined for 29 chances, the most in a match this tournament. — Jacob Nitzberg, senior stats analyst, ESPN

Germany and Ghana have had significant relations since Ghana gained its independence from Britain in 1957. One of the most striking examples is their plan for economic development cooperation, which they updated in 2012. The plan includes facets of cultural and academic exchange, but the most tangible aspect is aid. The plan itself doesn’t provide data on Germany’s aid to Ghana, but AidData shows that Ghana received $2.5 billion in aid from Germany between 1973 and 2011 for 1,100 projects, including water supply improvements and forestry development. Most of the aid (about $611 million) has been aimed at debt alleviation, but that mostly ended in 2006. By 2011, a majority of the German aid was geared toward government, civil society and agriculture.  — Hayley Munguia