Before the World Cup began, FiveThirtyEight’s projections, which are based on ESPN’s Soccer Power Index (SPI), were higher for teams from South America and lower for teams from Europe than other ratings systems’.

So far, that’s looked like a reasonably sharp assessment. And if we extend the analysis from continents to hemispheres — with teams from North America and South America in one group, and those from Europe, Africa and Asia in the other — it looks like we may even have underestimated teams from the Americas.

First, let’s look at the results by continental confederation. The table below evaluates each confederation’s results so far and compares them with the FiveThirtyEight/SPI forecast before the tournament. It includes results through Friday afternoon’s game between Costa Rica and Italy, and excludes games (such as the France-Switzerland match that I’m watching now) between teams from the same confederation. 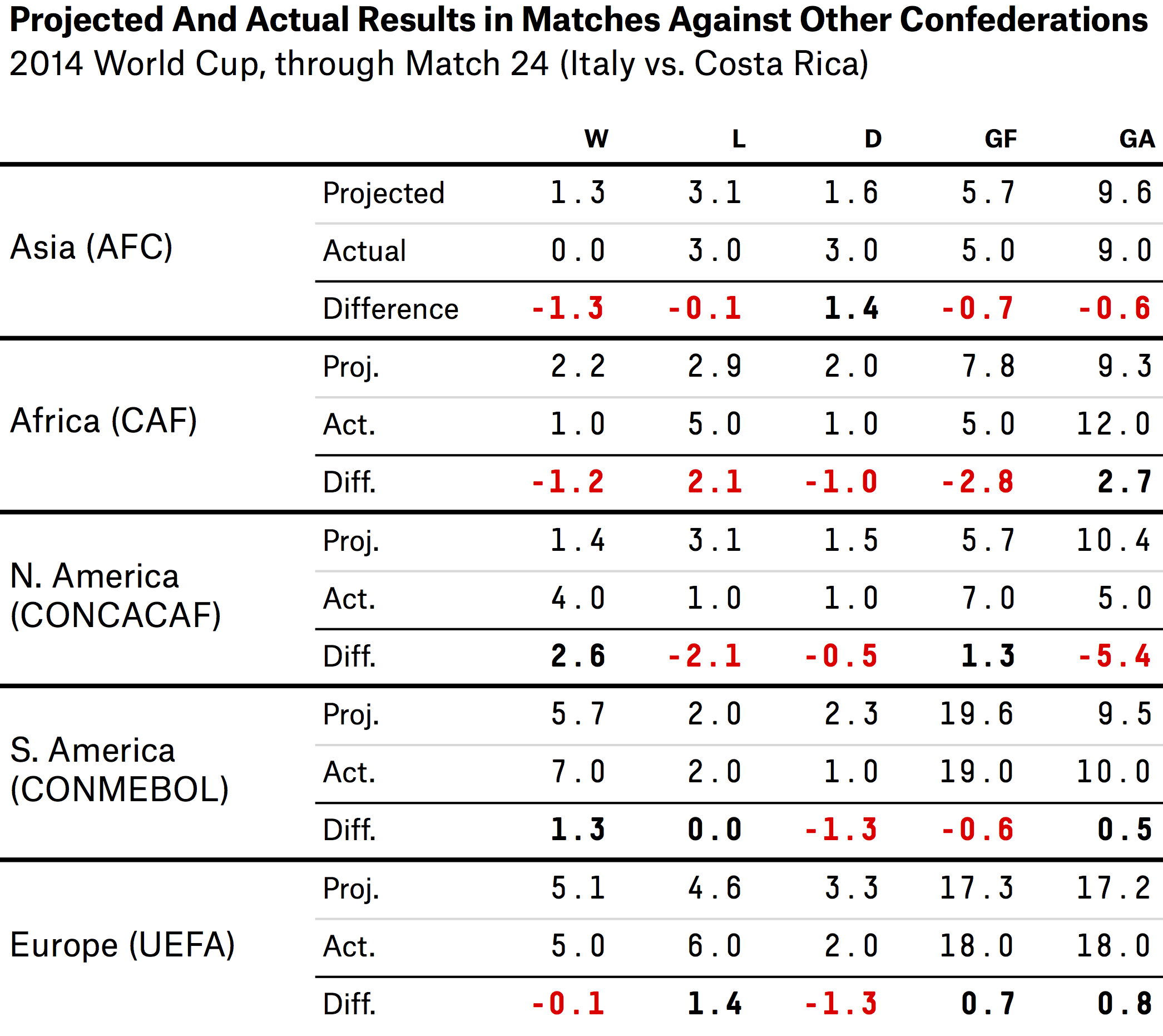 Before the tournament, our projections expected South American teams to have compiled 5.7 wins, 2.0 losses and 2.3 draws through this point in the World Cup. In fact, their record is 7-2-1. Not a huge difference, but the South American teams have more than held up their side of the bargain.

Teams from Europe, by contrast, are 5-6-2 in games played against other confederations, compared with an expected record of 5.1 wins, 4.6 losses and 3.3 draws. Pretty close, although a pinch worse than expected.

It’s teams from North America’s CONCACAF federation, instead, that have produced the largest discrepancy. They’re 4-1-1 so far, much better than their meager expected record of 1.4 wins, 3.1 losses and 1.5 draws. Meanwhile, teams from Asia and Africa, although not expected to be much good, are struggling with a combined record of just 1-8-4 so far.

A still more striking result comes when you combine the continents into hemispheres (counting Europe along with Asia and Africa in one hemisphere and the Americas in another). In inter-hemisphere matches so far, the Americas have 10 wins against just two losses. The rest of the world has the opposite record: 2-10-0.

What accounts for the differences? The least sexy explanation might be luck: We’re not talking about all that large a sample of matches. We’ll have to see whether the pattern holds through the rest of the tournament.

But travel distance could also play a role. The FiveThirtyEight match projections include a very modest adjustment for east-to-west travel distance (north-to-south distance seems to matter much less, perhaps because it doesn’t produce as much jet lag). The adjustment is calibrated based on the results of highly competitive soccer matches since 2006. However, there’s evidence that the home-continent advantage had been higher in the past. No European team has ever won a World Cup played in the Americas.

It’s also possible that the effect has something to do with the stadium atmosphere. Teams such as Chile and Colombia have received raucous support in their matches so far; in the game I attended at Estádio do Maracana in Rio de Janeiro on Wednesday, perhaps 90 percent of the crowd was pulling for the Chileans. Because partisan crowds seem to affect officiating decisions in soccer, that could mean these teams are getting a bit more slack from the officials. Chile, for example, spent much of the second half of its win against Spain lying on the pitch with exaggerated injuries but received no sanction for time-wasting.

A final theory might be that teams from the Americas are fresher. The major European leagues just completed play in mid-May after beginning their season last August. Portugal’s Cristiano Ronaldo, for example, played in 51 matches for Real Madrid since the start of last summer, including the Champions League final a few weeks ago. The best teams from the Americas, like Brazil and Argentina, also have plenty of stars in the major European leagues. But others, such as Costa Rica and Mexico, are less reliant on such players. That could serve to mitigate the talent advantage that the European teams might have and reward the countries with disciplined and tactical team play.