The spring and summer of 2020 were poised to offer some of the biggest moments yet for women’s basketball. Stellar Oregon guard Sabrina Ionescu — who declined to enter the WNBA draft as a junior last year for another crack at the national title — had the Ducks looking like the favorite going into this season’s tournament. Ionescu is also the presumptive No. 1 pick in this year’s WNBA draft, whereupon she would have the chance to start a rivalry with Elena Delle Donne and the rest of the league’s veteran stars. And of course, the best women’s players in the world would congregate in Tokyo this July for the Olympics, another prime showcase for the sport on a global stage.

Now all of that is up in the air because of the worldwide coronavirus pandemic. The NCAA Tournament was canceled, denying Ionescu her last chance at college glory. The draft, the subsequent WNBA season and even the Olympics have not yet been postponed, but there will be many logistical challenges to keeping their schedules — from the 90-plus active players currently overseas during the outbreak, to the possibility that postponed men’s sports will crowd the women out of arenas deep into the summer. And that’s assuming the virus’s spread is stopped in time to hold sporting events (with or without fans) before summer’s end. Whatever momentum women’s basketball had a few weeks ago will likely be gone by the time it resumes again.

And it did have momentum. The women’s NCAA Tournament saw its highest attendance in 15 years in 2019, and television ratings for the final were slightly up year-over-year — despite subscriber losses from ESPN, the event’s main broadcaster, and a less dominant season than usual by perennial draw UConn. The WNBA had a rough finals in terms of television ratings but had shown more encouraging signs earlier in the summer. And in general, interest in women’s basketball has been rising in recent years. According to Google Trends, search interest in both the women’s NCAA tourney and (especially) the WNBA was higher in 2019 than it was in 2016: 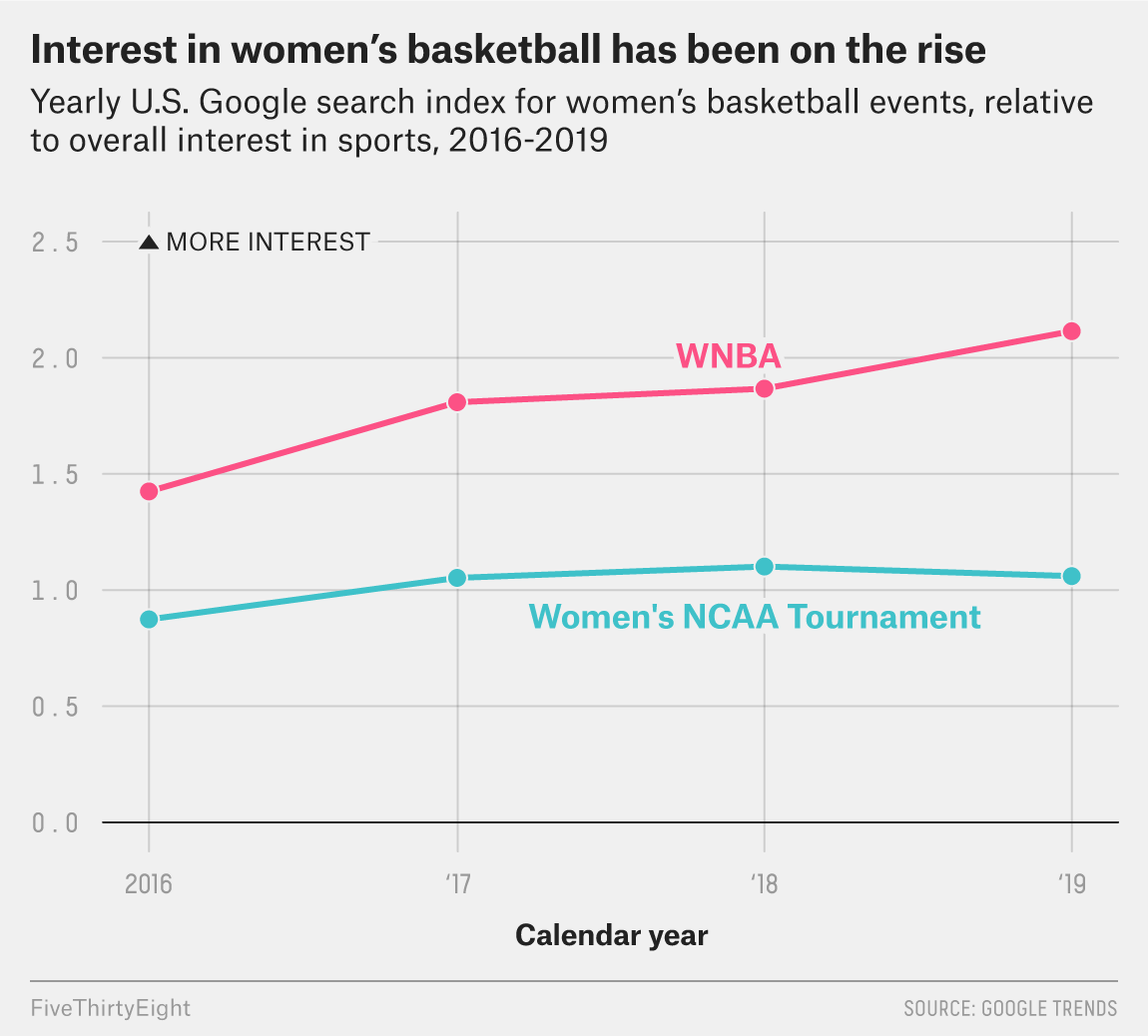 For the WNBA in particular, search traffic was up nearly 50 percent from three years earlier. Over the same span, the league’s players embraced labor solidarity with the U.S. women’s national soccer team in its high-profile quest for pay equality and were ultimately able to earn more money and better benefits in a new collective bargaining agreement signed in January.

And there was even more reason for optimism when looking ahead to 2020. As Bela Kirpalani of High Post Hoops recently noted, ticket demand for the 2020 WNBA season was increasing substantially as compared with 2019. According to data from VividSeats, an online ticketing marketplace, late-February site traffic was up year over year for 11 of the WNBA’s 12 teams, and six teams saw traffic increase at least twofold from 2019 (headlined by the defending champion Washington Mystics, whose traffic was up 837 percent in 2020).

The team with the second-largest surge in ticket interest (up 234 percent) was the New York Liberty, and that’s no coincidence. The Liberty have the first pick in the 2020 draft, and one of the other trends VividSeats noted was that Oregon women’s basketball ticket prices had exploded during Ionescu’s four seasons in Eugene,1 a testament to her drawing power. With the Liberty presumably getting a new star and moving from Westchester County to the Barclays Center in Brooklyn, the biggest market in the league would have a lot to be excited about.

But the coronavirus has imposed a new reality on our world, and sports are by no means an exception. The WNBA draft, scheduled for April 17, could conceivably be held on schedule — the NFL is planning to conduct its draft a week later, closed to the public, likely with the aid of technology to ensure proper social distancing. But it’s looking less and less likely that other items on the league schedule will happen as planned.

On March 15, the Centers for Disease Control and Prevention recommended banning mass gatherings of 50 or more people for the following eight weeks, which would push back any event with fans (and perhaps limit teams to skeleton staffs) until mid-May at the earliest. (Opening day is scheduled for May 15.) More realistically, the NBA has braced for the possibility that it will not be able to return until mid-to-late June, if not later; along those same lines, it has checked on arena availability into August.

What this means for the WNBA is unclear.

The league, usually on precarious financial footing even in normal times, will lose precious revenue if it plays games without getting gate revenue from fans. And with fans facing a recession, they may be less willing to spend even when the arenas reopen. There is also the question of how the WNBA would manage to carve out space in the sports calendar in late summer, if both the NBA and NHL — with whom three WNBA teams share arenas — claim arena dates and broadcast slots.

Also unclear: how the many, many WNBA players who supplement their incomes playing overseas will be able to keep those obligations if their American schedule is pushed back. (And how long international travel bans will be in effect, preventing players from playing abroad.)

Meanwhile, it seems more and more inevitable that this crisis will force the Olympics to be postponed. If that comes to pass, it would delay Team USA’s chance to win its seventh straight gold medal — and to tap into the same energy that made the U.S. women’s soccer team sporting icons last summer. The only saving grace from the WNBA’s perspective might be that it has a built-in Olympic break from mid-July to mid-August, which could potentially create a period of time for the other major sports to finish their seasons without overlap.

But it seems very likely that, in this time of great disruption, women’s hoops will have to improvise to keep from falling through the cracks. An optimist might predict increased excitement for sports whenever the leagues do come back, given the void left when essentially all of them suspended play all at once; maybe that appetite for competition will extend across the entire sporting landscape.

But with the amount of uncertainty facing all sports this year, the possibilities that women’s basketball held just a few short weeks ago have been dashed, its hard-fought progress now on hold.