After winning the U.S. Open in June, his second consecutive major victory, Jordan Spieth sought to pre-empt the eager golf press from christening a rivalry between him and Rory McIlroy, the man whose world No. 1 ranking he was rapidly threatening.

“Rory has four majors and dozens of wins, and I’m just starting out,” Spieth told reporters.

Spieth is correct about his relative inexperience; he turned 22 in July and is in only his third PGA Tour season. But what he has accomplished in 2015 is on pace to surpass anything achieved in a single season by McIlroy — or anyone else in modern PGA Tour history, for that matter — at such a young age.

Spieth’s raw exploits this season are impressive: four wins, including two majors, and six other top-five finishes. But if we want a more exact sense of how his 2015 compares to other great seasons in golf history, we must place them all on a standard scale. To do that, I compiled data from GOLFstats.com, converting the leaderboard of every PGA Tour event since 1970 into a set of z-scores (a metric1 that considers how many standard deviations from the mean2 a player’s score was). The average z-score for all of a player’s tournaments in a given season represents his performance that year.

According to that metric, here are the best 20 seasons in modern PGA Tour3 history: 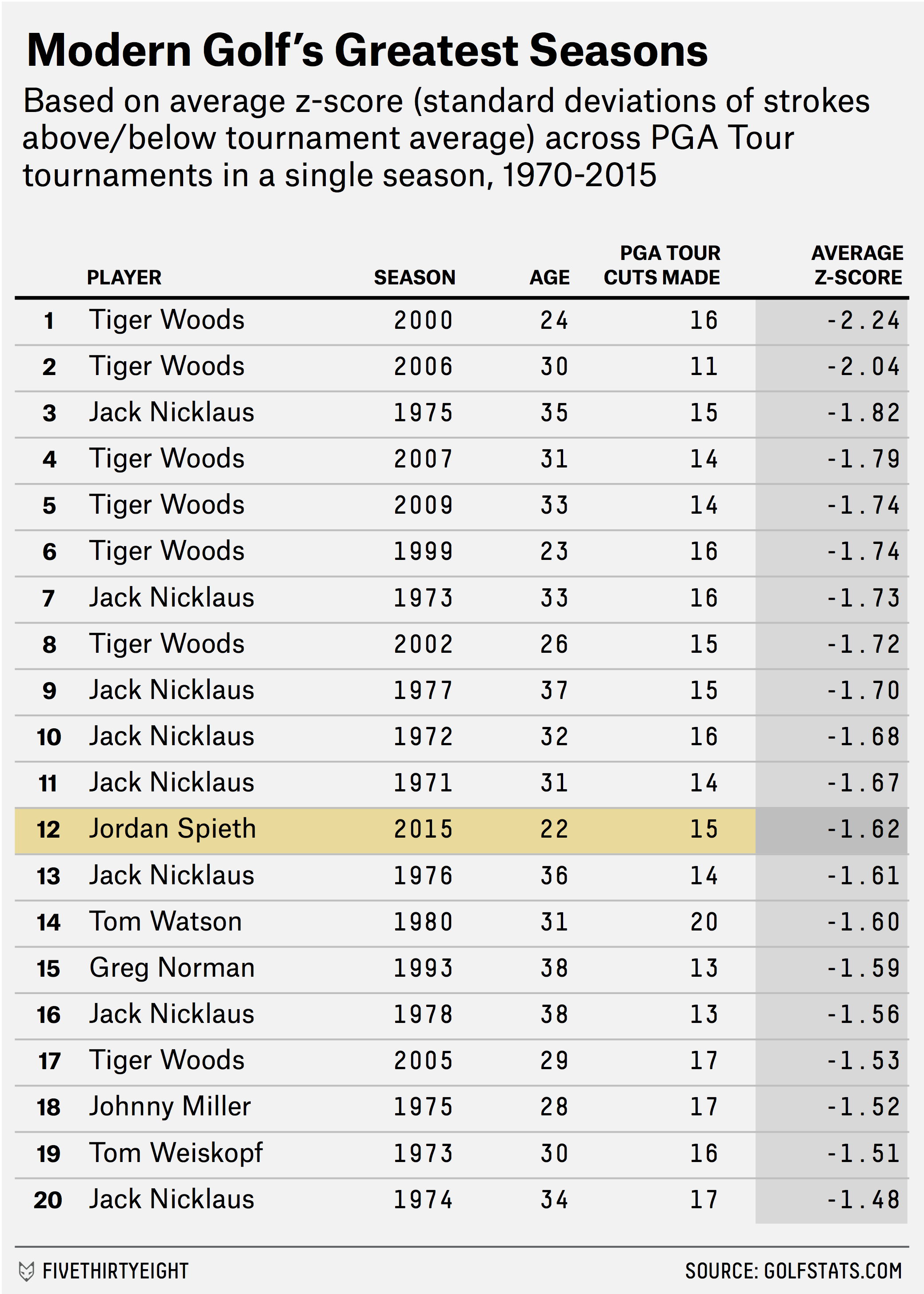 The sheer dominance of Tiger Woods and Jack Nicklaus, who account for the first 11 spots on the list, is striking. Although it would generate little controversy to label them the two greatest golfers of all time, these numbers help emphasize how far ahead of the field they were. What is perhaps even more astonishing is that the first non-Tiger, non-Jack name to appear on this list is Spieth’s, for his performance this year.

We’re in the midst of Spieth’s age-22 season (for this analysis, I defined a player’s age as the oldest he was at any point during the season in question), and thus far, he’s been a lot better than Woods was at the same age. Woods’s average z-score of -0.95 in 1998 ranks outside the top 50 seasons of all time. Likewise, McIlroy’s average z-score in his age-22 season was -0.58, which didn’t even rank among the top performances of 2011, much less the best seasons ever.4 And Spieth’s rise could be even scarier for the rest of the tour, considering the leap taken by both McIlroy and Woods between the ages of 22 and 23.

(As for Nicklaus, I don’t have complete data on his age-22 season, in 1962 — although Jack’s three wins and 16 top-tens compare favorably to Spieth on the surface.)

Of course, Spieth will have to sustain his current pace for a few more months to fully warrant this praise. And if he emerges from this weekend’s PGA Championship with his third major of the season, his case will almost certainly be helped; the average z-score for PGA winners since 1970 is -2.39 (a mark that would help him cut ever deeper into the Woods/Nicklaus monopoly). But even if Spieth goes without another victory in 2015, his performance to date suggests that he will not be able to downplay his on-course credentials for long.

Andrew Mooney has done analytics work in the front offices of two NFL teams and previously was the co-president of the Harvard College Sports Analysis Collective. He currently works at Facebook. @mooneyar