With his British Open victory Sunday, Rory McIlroy captured the third major championship of his career. This puts him in some incredible company — only 44 players in the history of golf have won three majors, and just 19 have done so since the PGA Championship adopted stroke play in 1958. On top of all that, McIlroy is barely 25 years old; as was noted often Sunday, only Jack Nicklaus and Tiger Woods were younger when they won their third career major.

Predicting whether Northern Ireland’s McIlroy will pass the major counts of Nicklaus or Woods is beyond the scope of this piece (that would probably involve a process similar to our analysis of whether Rafael Nadal would win more majors than Roger Federer in tennis). But we can look at how Nicklaus and Woods performed in their first three major victories and see how McIlroy stacks up. 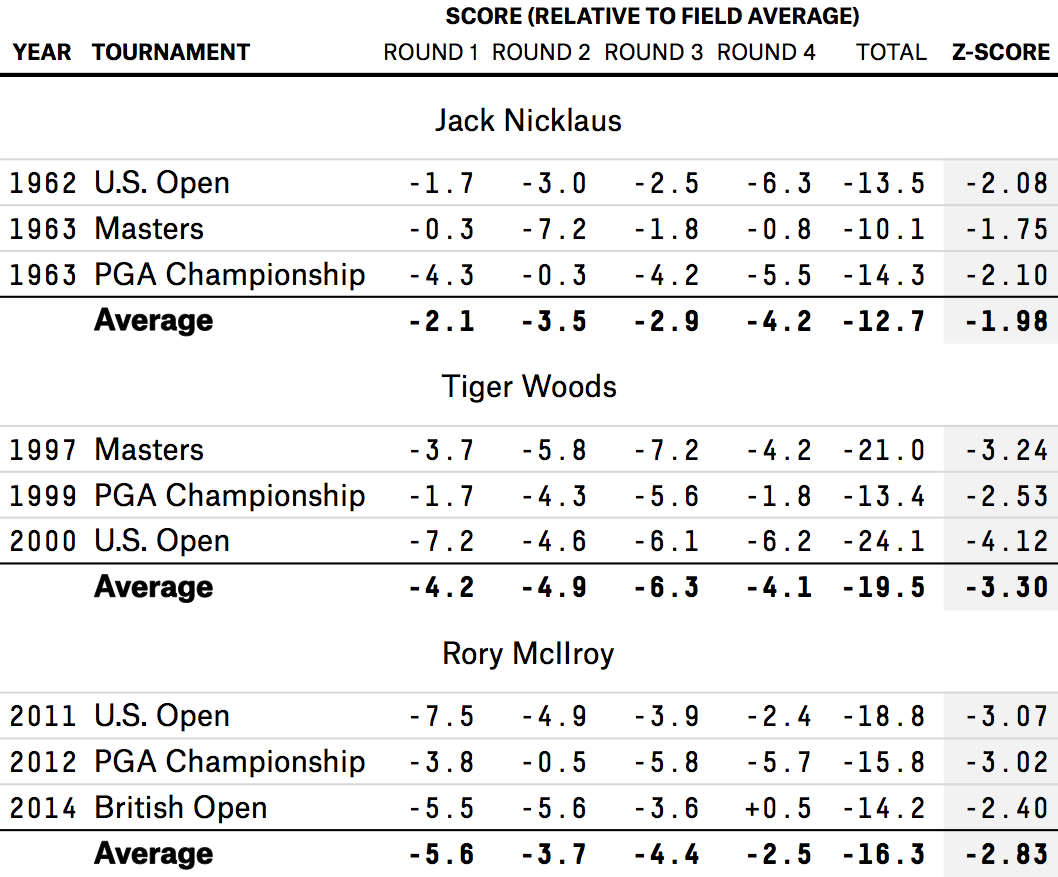 Woods’s first three major wins include two of the nine most dominant performances in a major since 1958 — according to the Z-Score system employed by our Grantland colleague Bill Barnwell (and, before that, James Sherrill) — so it’s tough for McIlroy to compete with Woods’s average of 19.5 strokes below the field in those tournaments.

The difference, though, is that McIlroy hasn’t done as much as Nicklaus did in the majors he wasn’t winning. Before grabbing his third major title, Nicklaus finished third at the 1963 British Open with a total score 14.6 strokes better than the field average. If we convert his Z-Score to a probability of winning, Nicklaus’s performance relative to the field was generally good enough to win a major 62 percent of the time (unfortunately for Nicklaus, Bob Charles and Phil Rodgers were both 15.6 strokes better than the field; Charles would win the tournament in a playoff). In addition, Nicklaus’s performance in the 1962 PGA Championship would typically win a major about 10 percent of the time.

In all, Nicklaus had 0.76 “expected wins” in all the majors he didn’t win before his third major crown. By contrast, McIlroy only piled up 0.16 expected wins before winning the British Open. (If you’re curious, Woods had 0.43.) Yes, McIlroy has a trio of third-place ties to his name, but none of those performances would typically be good enough to win a major more than 8 percent of the time. When Nicklaus lost, he often played well enough to win but didn’t get a lucky break here or there (he finished second in more majors, 19, than anyone else has won). The same can’t be said for McIlroy, at least at this stage of his career.

Even so, McIlroy belongs in the conversation with Woods and Nicklaus. A lot will have to go right for him to challenge Woods’s major championship count (let alone Nicklaus’s), but we should appreciate the greatness we’ve seen from McIlroy thus far.