By beating perhaps the greatest player of all time on his favorite surface in the Wimbledon final on Sunday, Novak Djokovic didn’t just retake the No. 1 ranking. He also surpassed his coach and his opponent’s coach by winning his seventh career Grand Slam title.

Roger Federer — whom Djokovic beat in a thrilling five-set final Sunday — and Rafael Nadal have set an intimidatingly high standard for success in contemporary men’s tennis. Djokovic has seven Grand Slam titles, an impressive haul but far short of Federer’s 17 and Nadal’s 14, which is tied for second all-time with Pete Sampras. If Djokovic’s Grand Slam career hadn’t coincided with those of two of the all time greats, he might have 12 major titles.

Djokovic might never approach the totals of his illustrious peers, but he achieved another significant milestone Sunday: His seventh major title puts him in front of the six won by his coach, Boris Becker, and Federer’s coach, Stefan Edberg. Those two men and Djokovic are among eight in the Open era with between six and eight Grand Slam titles. The other five are Andre Agassi; occasional TV commentators Jimmy Connors, John McEnroe and Mats Wilander; and Ivan Lendl, Andy Murray’s former coach.

Djokovic, 27, is starting to look like one of the best of this impressive group — with several years of his prime likely still in front of him in a sport where age has become an advantage.

Djokovic has the highest Grand Slam winning percentage of the group, and isn’t far behind overall leader Connors in tour-level winning percentage. Though he still has years of competition ahead of him, Djokovic already ranks near the middle of the eight greats in Grand Slam titles, finals, semifinals and match wins, plus weeks at No. 1 — a total he’ll add to starting Monday, when he retakes the top ranking from Nadal. He has a more well-rounded Grand Slam resume than most, with titles at three of the events and two finals at the fourth, the French Open. Only Agassi, who won all four Grand Slam tournaments at least once; and Lendl, who reached two finals at Wimbledon, can match Djokovic there. Djokovic doesn’t look as good on overall match wins, titles and finals, though he has already passed Wilander in all three categories. (Stats via ATP World Tour website, Tennis Abstract and tennis-x.com.) 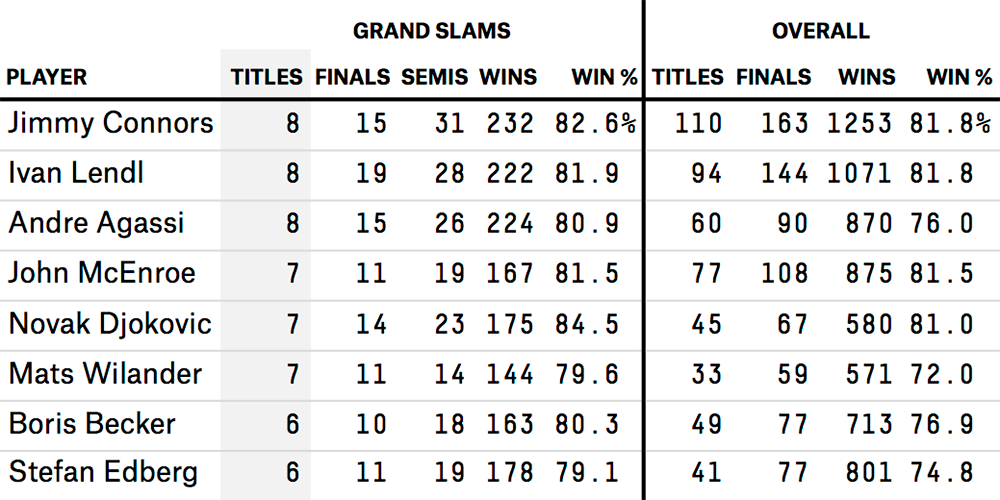 Oh, and even before the end of Sunday’s final, Djokovic had the endorsement of Andy Roddick, the most recent American man to reach the No. 1 ranking and win a major:

For all of you saying Djoker isn’t a legend .Stop it. 6 slams (Mac 7, Connors, Agassi 8) wins as of now. Still in his prime…. Just stop

These numbers don’t account for the degree of difficulty of Djokovic’s accomplishment. The seven greats whose company he keeps had to contend with great rivals, but none had to consistently face Nadal on clay, or Federer on grass. As great as Federer is off grass — winning four of every five matches — he has been even greater on it, winning seven of every eight matches in his career. Even at 32, Federer was near his best on Sunday, and Djokovic was better.

“To be able to win against him as one of my greatest rivals on this occasion on a court that he’s been dominating for so many years makes it a very special trophy for me,” Djokovic said in his press conference after the match.

Djokovic has now beaten Federer and Nadal at nearly every one of the Grand Slams — he’s missing only the long-sought win over Nadal in Paris. If Djokovic gets that win and a French Open title, he’ll start moving to a level beyond the already impressive company he keeps now with his coach.