Though the object of just about any sport is to outscore the opponent, teams that finish a whole season with the biggest scoring margin don’t always emerge as champions. That seeming contradiction is common in leagues that decide their champions with playoffs because weaker teams sometimes overachieve in the postseason. But it also happens now and then in the major European soccer leagues, which crown their champions based solely on regular-season results.

Usually, this sort of luck evens out. The club that wins all of its one-goal matches one season will have a good chance to win its league’s title without leading in goal differential. But it will find it tough to repeat the feat: Winning a title that way is like walking a tightrope, compared to the relatively straightforward path for the team with the best goal differential.

That luck, though, has almost never played out in Liverpool’s favor. Its extended run of difficulty turning positive scoring margins into trophies demonstrates that there is more to winning titles than winning the scoreboard: Scoring at the right time and protecting slim leads are also important. Then again, considering this misfortune has persisted across many different Liverpool managers and players, it may also just be the latest evidence that sports often aren’t fair.

At least one of the factors behind Liverpool’s 24-year title drought must feel like hard luck to supporters of the Reds. Liverpool leads major European clubs, by a wide margin, in failing to turn scoring margins into wins — the necessary ingredient for league points and thus titles — since the debut of the English Premier League, 22 years ago. One of its top Premier League rivals, Manchester United, has led the league in points relative to expectation based on goals scored and allowed. So Liverpool received little return on investment while Man U got a windfall.

This season, that all could have changed. In soccer, a win typically is worth three points in the league table, while a draw is worth one. A couple of weeks ago, with a struggling United out of the title race, the Reds won their 11th consecutive league match, over Norwich, and led that other Manchester club — Manchester City — by five points, even though Man City held the better goal differential, +54 to Liverpool’s +52. Winning a title without leading the league in goal differential would have provided plenty of catharsis for Liverpool supporters.

But ahead of its season finale Sunday at home against Newcastle, Liverpool has fallen off the pace. It blew a three-goal lead to Crystal Palace on Monday in the second half. City took control of the title race with a 4-0 win against Aston Villa on Wednesday. City leads Liverpool by two points and holds an unassailable lead of 13 goals in scoring margin, which determines the league champion if two or more teams tie for the points lead.1 To win the title, Liverpool must now beat Newcastle and hope West Ham upsets City in Manchester.

Even if Liverpool doesn’t win the title Sunday, two of Europe’s other three strongest leagues, in Italy and Spain, could be won by a club that didn’t lead the league in goal differential.

It would be unusual for two or more champions in England, Italy, Spain and Germany to trail a rival in goal differential. On average since 1992-93, it’s happened in one of the four leagues each year, and just once every other year in the last decade.

Across all sports, the relationship between scoring margin and winning can differ subtly. In the last few paragraphs, I’ve been comparing soccer clubs by goal differential, since that’s the stat that commonly appears in league tables. But the difference between goals scored and goals allowed is an incomplete way of assessing team performance. The club that scores 50 goals and allows none will suffer no losses, and likely will have a better record than a rival that scores 150 goals and allows 75.

That, again, is a starting point. For baseball the best exponent to use in this formula turns out to be lower than 2, closer to 1.8. Some analysts also prefer to adjust the exponent depending on the run-scoring environment. And other sports have different exponents — basketball’s, for instance, is much higher.

Soccer presents a Pythagorean challenge because about a quarter of its matches end in draws, worth one point each in the league tables. Because wins are worth three points, the most accurate Pythagorean analyses overestimate most teams’ points totals, as soccer analyst Howard Hamilton has found. I got the same result when seeking the best exponent for the last 21 complete seasons of the big four European professional leagues, using data compiled by Opta, the soccer-stats providers and analysts. The best fit,2 an exponent of 1.19, overestimated the average team’s final standing by 4.6 points.

Advanced analysis in soccer is younger than its cousin disciplines for other sports, and there isn’t yet a consensus about how to solve this conundrum. Hamilton derived a formula — published in a peer-reviewed journal — to account separately for the probability of wins, losses and draws. Others have calculated formulas with three separate exponents. Depending on which approach analysts use, and which years and leagues they’re studying, the results can vary a bit, though typically they’re able to predict a team’s final points total to within three to five points.

I tried several of these approaches with my Opta-supplied data set, and found the best balance between complexity and accuracy was one that used two exponents: one for teams’ goals scored, and one for goals allowed.3 The model produced an estimate for each club, for each season, of how many points it should have received given its number of goals scored and allowed. And that let me to calculate which teams consistently outperformed or underperformed their expected records. 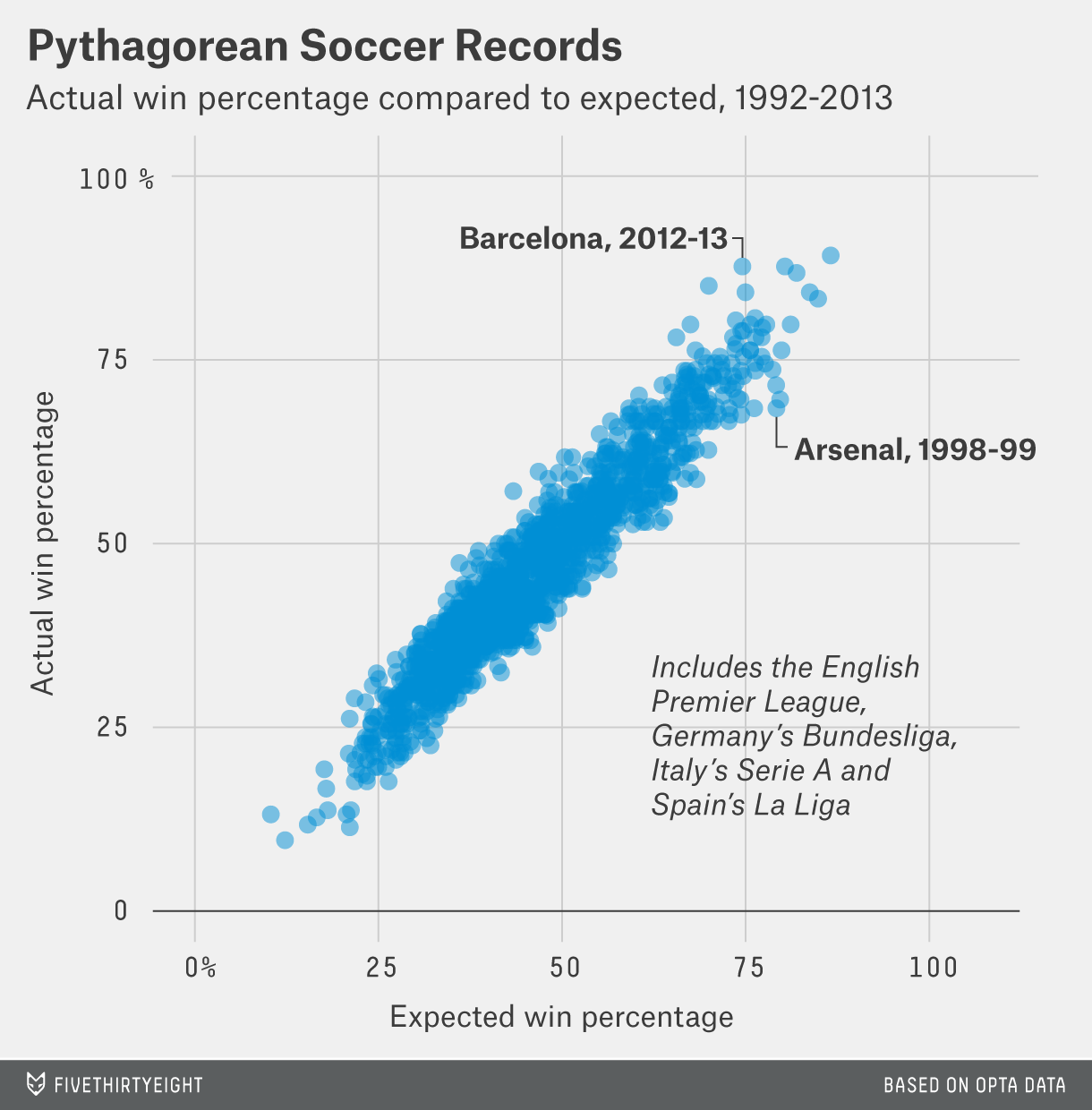 Even this year Atlético has been more good than lucky. Though Barcelona and Real Madrid have better goal differentials, Atlético has conceded far fewer goals. For the very best clubs, a goal allowed is costlier than a goal scored is valuable, because the surrendered goal could turn a win into a draw and cost two points.4 Based on my model, Atlético could have expected to be just ahead of Barcelona and Real Madrid based on goals. 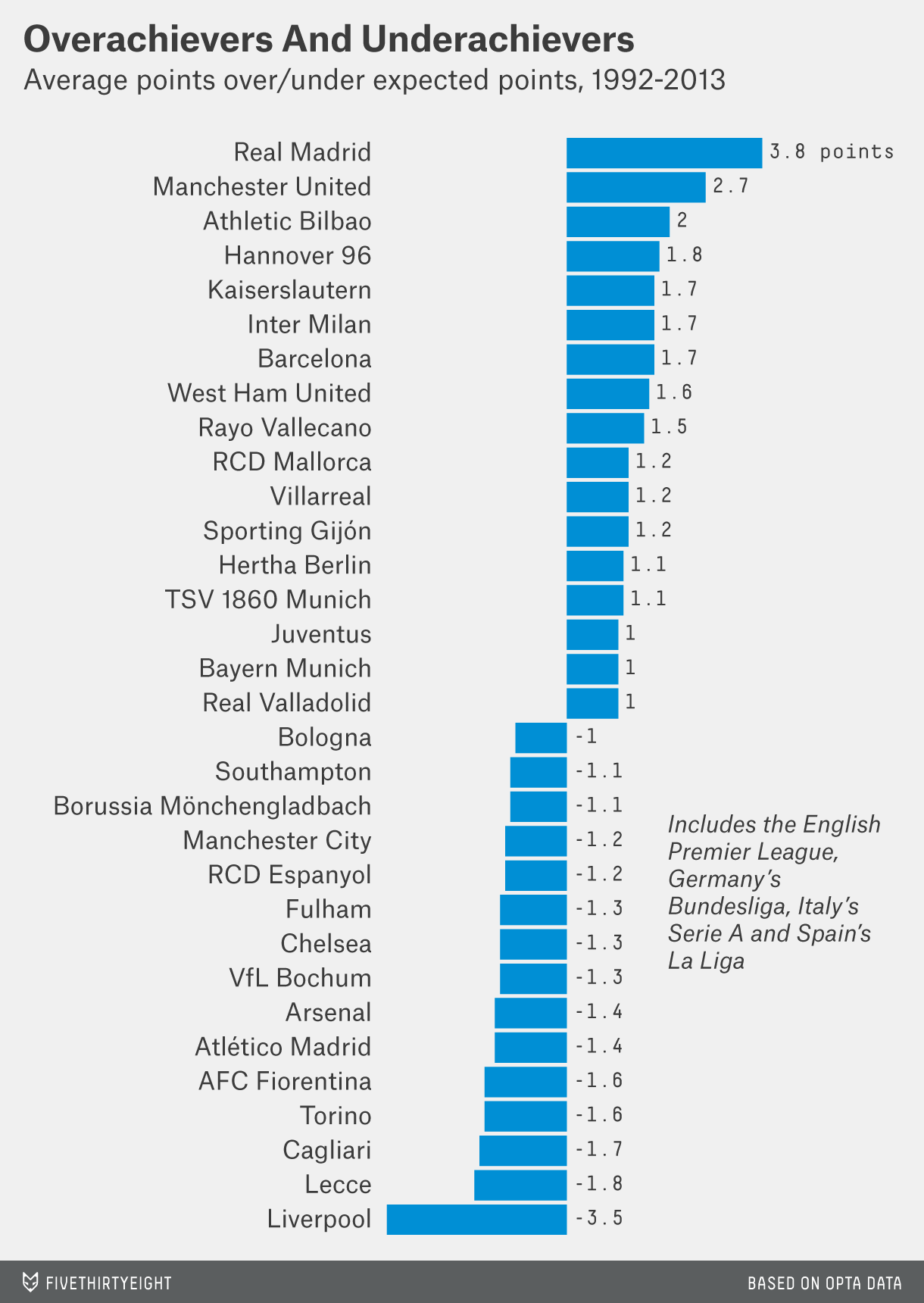 Had Liverpool been just slightly better at turning goals into wins, it might have won three league titles in the last two decades. In 1995-96, Liverpool conceded one fewer goal than league champs Manchester United over the 38-match season, while scoring three fewer. According to my formula, that should have amounted to a near-tie at the top of the table; instead, United won by 11 points. By goals scored and allowed, Liverpool also should have been neck and neck with Arsenal in 2001-02: Arsenal scored 12 more but conceded six more, as well. Yet the Gunners outgunned Liverpool by seven points in the final table. It was United, again, thwarting Liverpool’s title hopes in 2008-09: The Reds scored nine more goals than United while conceding just three more, which should have been good enough for a one-point edge in the final table. United won by four points.

Many of Liverpool’s goals have come when the club least needed them, with a match’s outcome already decided. For instance, in 2001-02, Liverpool was 13-3 in matches decided by two goals or more, with a goal differential in those matches of +29. In February, Liverpool faced a hot Ipswich Town club that had won seven of eight league matches. Liverpool won, 6-0. In the season finale, they met again, and Liverpool won, 5-0. Ipswich Town lost only two other matches all season by more than two goals.

Even when Liverpool has been out of the league race, it’s often had hard luck. In 1998-99, the Reds scored 22 more goals than West Ham United, while allowing four fewer. Yet somehow the Hammers finished ahead of Liverpool.

Liverpool didn’t deserve any of the titles it didn’t win. Clubs know their target is points, not goal differential. Those that win the league without leading in goal differential might be better at protecting one-goal leads, or less intent on running up the score on weak opponents. It turns out that winning is about as good a predictor of future winning as are any stats based on goal differential.5

Even so, for the same club to have such a poor record relative to expectations over 21 years suggests a spate of bad luck. The common threads over that long a period are Liverpool’s colors and its fans. And Liverpool supporters, by now, could reasonably feel they’re due some good luck — maybe even enough for their club to overcome Man City’s strong position, and strong goal differential, to win the league.