Manchester United fired manager David Moyes with four matches left in the English Premier League season, the club announced on Tuesday. His removal — after only 10 months on the job — left Moyes more than 25 seasons shy of the tenure of his predecessor, Sir Alex Ferguson. Going by results, that’s understandable: Ferguson’s United sides won England’s top league 13 times, while United under Moyes was languishing at seventh in the league, eliminated from the lucrative, Europe-wide Champions League for the coming season.

Although Ferguson selected him as his successor, Moyes was always going to have big shoes to fill. Yet less noticed was that Ferguson had been, in his final season, lucky as well as good. By several crucial stats, United wasn’t as good last year as it seemed in winning the league by 11 points. The team has been worse by all these measures under Moyes. But the club has also been far less lucky.

Soccer analysts, inspired by ice hockey’s Corsi stat, have begun to examine teams’ ability to create and prevent shots. Teams’ share of all shots taken, and their share of all shots on target, are far more predictive of future success than teams’ percentage of shots converted or of opponents’ shots saved, as soccer analyst James Grayson has shown.

Last season, United was far from leading the Premier League in creating the lion’s share of shots, or shots on target. United ranked eighth of 20 teams in proportion of shots, and seventh in proportion of shots on target, according to Grayson; and seventh and fourth, respectively, according to Benjamin Pugsley, who uses a slightly different set of underlying numbers. (Soccer doesn’t yet have completely standardized stats — or, as, Pugsley puts it, “Football and numbers is really new.”) 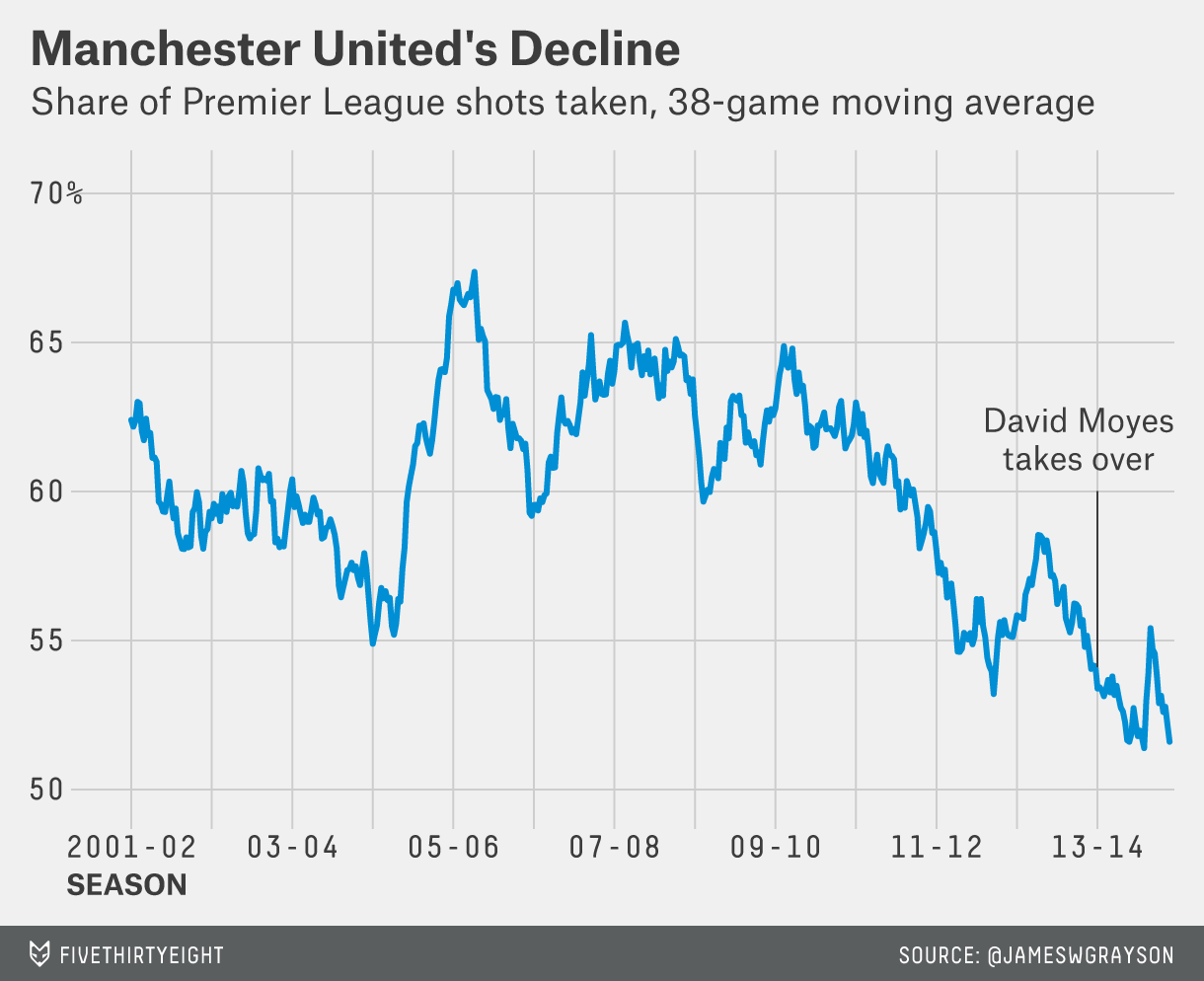 How, then, did Manchester United nonetheless lead the league in goal differential? By leading the league in shooting percentage and placing fourth in save percentage. Grayson calls the sum of those two percentages, multiplied by 1,000, PDO (after its hockey name), and he’s shown that it has essentially no value in predicting future results. United led the Premier League in PDO by a big margin last year. It did the same the year before, which at the time prompted Grayson to forecast a United decline — a year too early, as it turned out.

So United’s path to the league title last year was a lucky one; its performance didn’t predict continued success this season. Sure enough, United’s PDO has declined from league-leading to seventh best, and that, combined with less-precipitous declines in share of shots and shots on target, has led to the club outscoring opponents by less than half a goal per game, compared to more than a goal per game last season.

Was Ferguson just lucky last season, or was he able to conjure consistently high levels of shooting accuracy and goalkeeping even after his club’s edge in shots had eroded? On the one hand, his United clubs sustained high levels of PDO during his tenure. On the other hand, there’s some out-of-sample evidence from United’s Champions League performance, this season and last season.

In Ferguson’s last year at the helm, United played eight Champions League games, yielded nine more shots than it took and outscored opponents by two goals. Real Madrid eliminated United in the round of 16. In this season’s Champions League, under Moyes, United allowed 32 more shots than it attempted, yet United still outscored opponents by eight goals, advancing to the quarterfinal stage.

These results suggest United’s overachievement in the Premier League last season was due more to luck than to anything Ferguson did.