I’m traveling for Thanksgiving, so we’ll keep this relatively brief. But I thought this map was worth sharing. It shows how President Obama and Mitt Romney performed on Election Day relative to the FiveThirtyEight forecasts in each state, based on the ballots counted so far.

States colored in blue represent those where Mr. Obama beat his forecast — the deeper the blue color, the larger the margin by which he did so — while those in red are the states where Mr. Romney bested his. 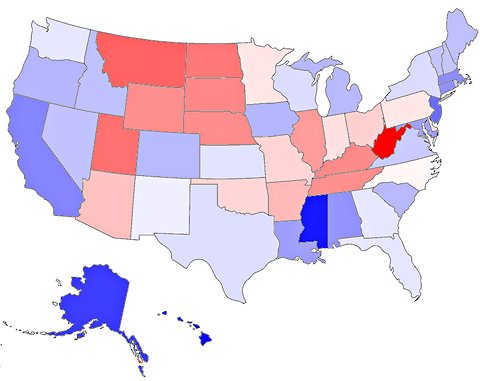 A few things jump out here.

First, there are some pretty clear regional patterns in which each candidate beat his forecast (and, by extension, beat the polls). States where Mr. Obama beat the polls (Oregon, for example) tended to border others where he also did so. The same was true for Mr. Romney.

This suggests that it is a mistake to assume that the potential error in the polls is distributed randomly. Instead, if a candidate beats the polls in one state, he is very likely to also do so in other states that are demographically or geographically similar. (The FiveThirtyEight model assumes that error in the polls may in fact be correlated in just this fashion.)

Second, the map shows some possible effects from Hurricane Sandy. Mr. Obama beat the polls in almost every state in the Northeast, and particularly in New Jersey. It could just be a coincidence — Mr. Obama also beat the polls on the West Coast, which has some cultural similarities to the Northeast but which was not affected by the storm. It seems more likely, however, that there were some regional effects from the storm, especially in the worst-affected areas.

Interestingly, Mr. Obama also did much better than expected in the Gulf Coast — particularly in Mississippi and Louisiana, where he performed better in 2012 than in 2008. These states have been catastrophically affected by previous storms like Hurricane Katrina, of course. Could it have been that Mr. Obama’s response to Hurricane Sandy was more salient in these states?

Third, there was some tendency for Mr. Obama to beat his forecasts in states where a large percentage of the population are racial minorities, but to match or underperform them in whiter states.

This squares in some ways with what we already “knew” by looking at the exit polls — that Mr. Obama performed quite a bit worse among white voters than he did in 2008, but that minority turnout was high and that Mr. Obama did very well with African-Americans, Asian-Americans and Hispanics. It seems likely that some pollsters were underestimating minority turnout, although others may have overestimated his performance among white voters.