It’s official: Amar’e Stoudemire is a New York Knickerbocker no more. The team waived the veteran forward Monday, ending his Knicks tenure midway through his fifth season with the club (one in which he’s due $23.4 million in salary).

ESPN’s sources reported that the Dallas Mavericks are waiting in the wings to pick up Stoudemire for the stretch run, provided he clears waivers Wednesday evening. But before he signs with Dallas, it’s worth stopping for a moment and asking: Where does Stoudemire’s ill-fated Knicks contract — he was doomed by bad knees — rank among the NBA’s worst (if not ever, at least in recent memory)?

It’s not particularly simple to assess the value of NBA contracts for a number of reasons, many data-related, so consider this a very approximate effort. Stoudemire has produced 8.1 wins above replacement (WAR) over the previous five seasons, during which he’s been paid a total of $99,743,996 (both numbers include the 2014-15 season). About $95.4 million of that was paid above what the Knicks could have delivered to a replacement-level (zero-WAR) player making the NBA’s minimum salary,1 so effectively New York paid about $11.8 million for each of Stoudemire’s wins above replacement during his stay in the Big Apple.

Needless to say, that wasn’t a bargain. Using Basketball-Reference.com’s transaction database, it’s difficult to discern actual trades from free-agent signings that utilized the sign-and-trade mechanic of the NBA’s collective bargaining agreement. But all players who were either traded or signed as free agents between May and October 2010 (a group that includes Stoudemire and any other blockbuster free agent) were paid $1.4 billion to produce 509.4 WAR. At the going rate, that means it would have been reasonable to expect Stoudemire’s $95.4 million to turn into 33.7 WAR. By this accounting, Stoudemire’s production since the 2010-11 season fell short of his expectations by 25.6 WAR.

As a comparison, LeBron James, the biggest-name free agent signed the same summer, was paid $83.4 million above the minimum over the ensuing five seasons (granted, not all of it by the same team under the same contract), which would seem to portend 29.5 WAR; instead, James posted 82.8 WAR for a surplus of 53.3 WAR.

The bargaining agreement contains various arcane provisions that often result in tragicomic salary leaderboards.2 But Stoudemire’s disappointing play stands out as particularly egregious. And it isn’t like there aren’t other contenders for the “worst contract” crown. For example, the Detroit Pistons in 2009 signed Ben Gordon to a five-year, $55 million deal that saw him deliver a below-replacement level -3.5 WAR — yet even Gordon’s 23.8-WAR shortfall was not as bad as Stoudemire’s.

According to this method of comparing actual five-year WAR to expected WAR from salary, Stoudemire’s signing ranks as the worst offseason acquisition3 since the summer of 1996, when Basketball Reference’s transactions begin to be relatively complete. Here are the particulars of his badness, along with the next 29 worst offseason prizes of the same span: 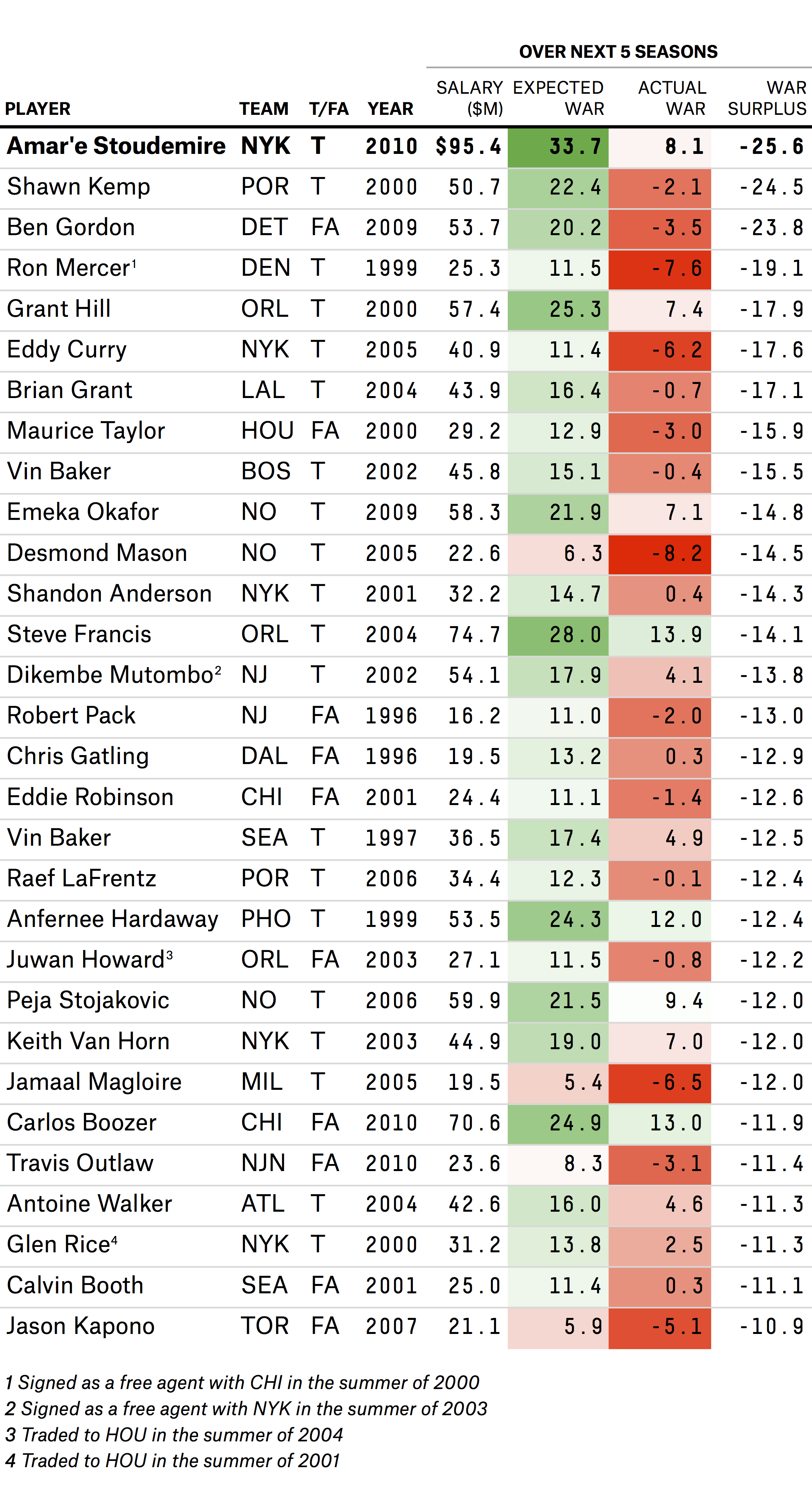