sara.ziegler (Sara Ziegler, sports editor): In Week 5, we saw two teams get their first wins of the NFL season, a coach receive his pink slip and an undrafted rookie quarterback out of Samford — yes, Samford — make his NFL debut, nearly leading his team to a comeback win.

We also saw last season’s MVP limping around the field on Sunday night. Guys, how worried should we be about Patrick Mahomes and the Kansas City Chiefs?

Salfino (Michael Salfino, FiveThirtyEight contributor): This was the second game in a row where a team took the deep ball away from Mahomes. Of course, Tyreek Hill could be back next week, so that could turn the tables in the Chiefs’ favor again, regardless. Mahomes’s ankle injury didn’t seem too serious, but it could affect his ability to evade the rush for a few weeks, as it did after the injury last night.

neil (Neil Paine, senior sportswriter): Yeah. He’s had some ankle issues already earlier this season, but he’s expected to be fine from all the reports I’ve seen. What his performance really did was underscore just how strange it is for Mahomes to not be amazing.

Believe it or not, this was only the second start of his career in which he was below-average in our Elo QB metric. 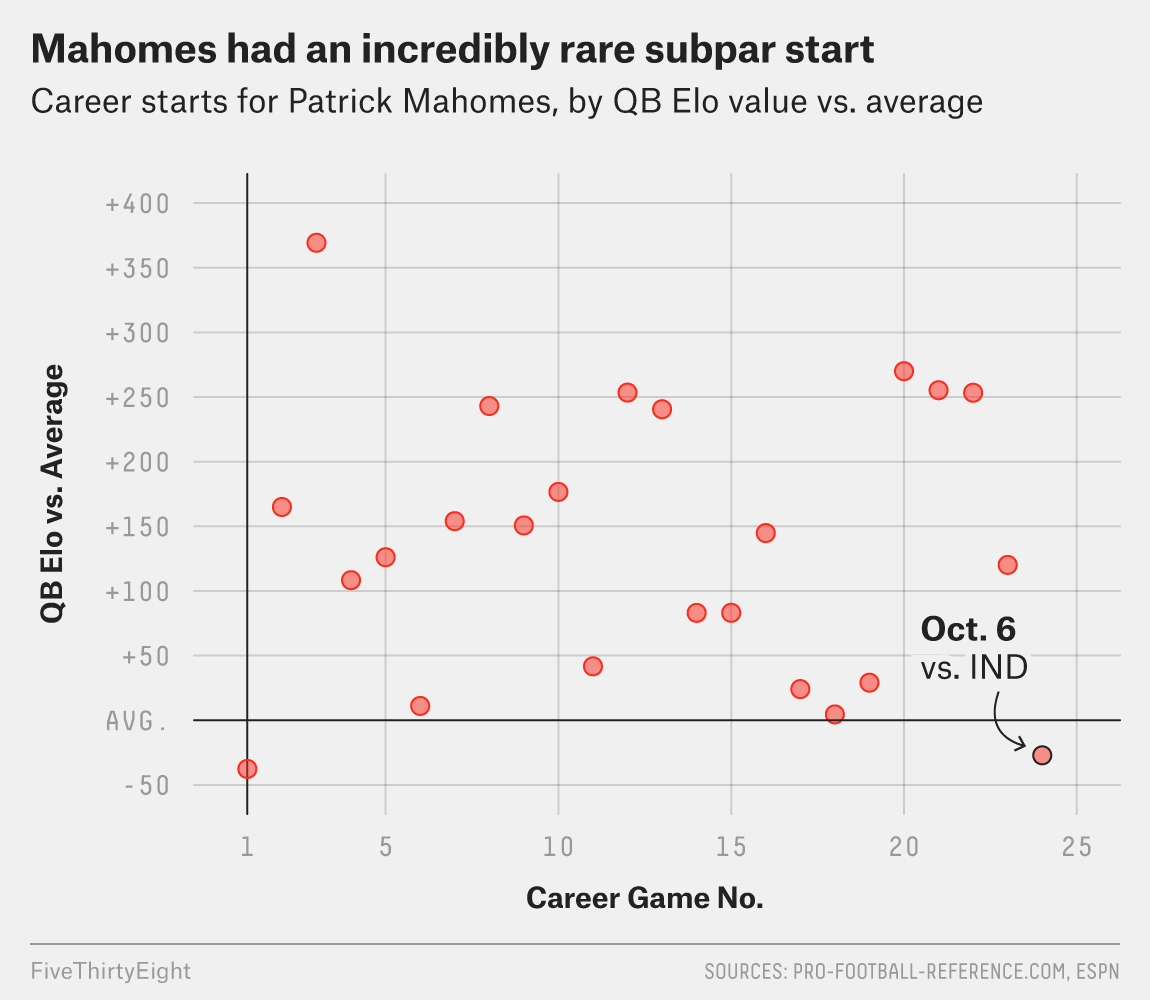 joshua.hermsmeyer (Josh Hermsmeyer, NFL analyst): I think the same is true of QBR — but I suppose our metric and QBR are closely related.

neil: Right. Mahomes’s previous below-average start was his first career start, at the end of 2017. So that means Mahomes had a streak of 22 consecutive above-average starts end yesterday.

Salfino: Mahomes had been on an epic run of efficiency on 20-plus air-yard passes, and in the past two weeks, he was just 4 for 15 with a passer rating of 80.7. Not good.

sara.ziegler: So should we have expected that his amazing run was going to come to an end at some point, and this was just the time it happened? Or is there something else going on here?

Salfino: I think the Lions and Matt Patricia went to school on it, and the Colts followed up even with an injury-riddled secondary. Now the ball is in the Chiefs’ court. Sort of the NFL circle of life.

neil: If anybody can adapt, it’s Andy Reid. And it still helps to have a QB who can do this:

joshua.hermsmeyer: I think it’s interesting to see how reliant the team really is on its all-world QB. It’s just so clear how much he means to the Chiefs, and I would think their top priority is to keep him healthy.

Salfino: Someone posted a diagram on that play showing that pass-rushers have to coordinate rather than going for the cheese in the same direction. The deeper rusher, we were told, should have gone outside to keep Mahomes contained. Sort of like how the Raptors worked in Jurassic Park. 🙂

Teams have to learn to coordinate their rushes, if the DT sees the DR go for it, he has to get outside to contain…it's not called, it's experience thing as great as that play is, if Colts don't get all balled up on their rush. it makes it harder #INDvsKC #ChiefsKingdom #Colts pic.twitter.com/AuUnOpmrlJ

neil: And here I thought all the Raptor talk this week would be confined to basketball …

So what do the Chiefs need to do to take care of Mahomes? The offensive line looked … not good.

Salfino: Deeper passes require more protection. Maybe they need to get into a quicker rhythm and forget about emphasizing the deep throws so often. His protection for his career to date has been top-notch.

joshua.hermsmeyer: There are schemes you can employ to buy more time and prevent him from having to hang in the pocket, but they’re probably not sustainable. It’s also tough because what makes him so special is what he does when a play breaks down — and that’s also a dangerous time to be a QB.

Salfino: But they’re still winning the battle of the passing game so decisively for the season to date that I really believe that, despite the loss, the Chiefs are right on schedule. The pass defense is decent. The run defense … not so good. But high-scoring teams naturally evolve this way, if they’re smart. It’s the old Colts/Peyton Manning model.

sara.ziegler: So if the Chiefs are going to be fine, how about the Cowboys? They looked incredibly flat on Sunday against the Packers.

Salfino: If you believe the Cowboys have the kind of high-powered passing offense their per-play stats suggest, they’re golden. I’m not sure I believe that, though. I’m not quite ready to go all-in on Dak Prescott as a true franchise-level QB. He’s good, though.

Neil’s point about their win quality is spot-on.

neil: Though, to push back against my own snarky observation about opponent-quality splits, Dallas did beat six above-1500 Elo teams during that period last season when they won eight times in nine games down the stretch.

So it’s not necessarily a persistent split. But it has stood out so far this season.

joshua.hermsmeyer: Dak has been fantastic. I thought they mounted a respectable second-half comeback. If I’m a Cowboys fan, I’m not worried when my team’s QB is playing like one of the top 5 at his position.

–>Can see why Mahomes-Prescott-Wilson-Watson are the top 4 in ESPN's QBR.
–>Not sure why QBR isn't impressed by Jimmy G (he's No. 16 there)
–>Jackson really falling back to earth pic.twitter.com/mY7Mgn12XY

sara.ziegler: So the game did nothing to change anyone’s priors on the Cowboys?

joshua.hermsmeyer: It was a loss, so not great! But I’m not selling on the Cowboys yet.

Salfino: Definitely not selling. They are a legit Super Bowl contender.

sara.ziegler: You guys are refusing to overreact, and it’s annoying.

neil: Maybe the past two games have settled them back into the tier below the top contenders again.

Salfino: You can overreact to Captain Kirk, Sara. The Vikings are an offensive juggernaut.

And they are not.

neil: Speaking of teams and QBs that play well only against below-average opponents…

neil: That IS a trend dating back to last season.

Salfino: The Giants defense is … inviting.

sara.ziegler: I am on record saying that the Vikings were 100 percent going to win that game. It was a classic game of absolutely no stakes, so Kirk Cousins played well. Easiest call I’ve ever made.

neil: Can’t he just convince himself that all games have no stakes?? We said it ourselves last week: We all die in the end. Loosen up a little, Kirk.

joshua.hermsmeyer: I was just happy to see the Squeaky Wheel narrative pay off for Adam Thielen. Two touchdowns was a great game for him.

sara.ziegler: OK, so what about the other notable NFC North teams this week? Aaron Rodgers did nothing, but the Packers looked … great?

Salfino: The Packers pretty much ignored their wide receivers in the game. It somehow worked.

We may have to accept that the Lions are the best team in the North. Did I just type that?

sara.ziegler: The same Lions that tied Arizona? Those Lions?

Salfino: Actually, the Vikings grade better in my key stat — net yards per pass play — but I don’t want Sara to have unrealistic expectations. I will say the Lions are playing better than the Bears.

sara.ziegler: My expectations are always as low as possible.

sara.ziegler: But what about those Bears? Is Chase Daniel not the answer???

Salfino: No less not the answer than Mitchell Trubisky.

I’ve tied myself up in double negatives.

Daniel and Trubisky are a double negative.

joshua.hermsmeyer: I need more coffee to parse these Salfino Bears takes. Interestingly, if you were hanging your hat on their defense being great against the pass this season, early returns are not that good. Chicago, so far, has allowed the fifth-highest completion percentage in the league.

neil: Daniel basically played like you would expect from somebody with four career starts in 10 NFL seasons.

Salfino: Daniel is beating the system.

But Jon Gruden is still a good coach. That he’s 3-2 — with a team that is not talented and with all the Antonio Brown distractions — is impressive. The Raiders should be a losing team and probably still will be, but it won’t be because of Gruden.

neil: What about JAY Gruden? Lol.

neil: Josh, is the Bears’ performance another example of defenses just regressing to the mean incredibly quickly in the NFL?

joshua.hermsmeyer: I don’t know what to make of NFL defenses, tbh. Some claim there was a jet-lag factor with Chicago, or they didn’t sleep well. It’s all a muddle.

Salfino: I’m shocked by how bad the Ravens pass defense has looked, even yesterday against the third-string QB.

sara.ziegler: Devlin Hodges was the best part of that game.

That story is my favorite of the season so far. Guy goes undrafted, signed to the practice squad, makes the team because some other backup is traded away … then, BAM. He’s leading a second-half comeback.

Salfino: The Browns may win the AFC North by default even with a loss tonight.

neil: We do still have Cleveland as favorites (granted, at 49 percent) to win the division.

joshua.hermsmeyer: I feel like you were bagging on Baker Mayfield just a week or two ago, Mike. How quickly the winds change.

neil: And we were pumping up Lamar Jackson!

BTW, speaking of Jackson, he had the second-worst QB Elo game of the week yesterday. After that hot start, his rolling QB rating is basically average again.

neil: This was such a sad play:

Salfino: Jets fans like me have not had a season at all yet, and it’s Week 6. Can’t even kill the team for the way they’re playing. Can’t practice Falk if you think Sam Darnold can play because you have to get him ready for his health’s sake. And you can’t know how big his spleen is. But practice is not gonna save Falk, who just has no clock in his head for when to throw the ball. That’s fatal in the NFL. The Jets defense is actually … OK.

neil: When will Jets QBs not be on the receiving end of the universe’s jokes?

joshua.hermsmeyer: It’s the curse Namath put on the franchise after that embarrassingly inept attempt at hitting on Suzy Kolber on the sidelines.

sara.ziegler: I’ve never before thought about how big a quarterback’s spleen is.

Sara Ziegler is the former sports editor at FiveThirtyEight. @saramziegler