Patrick Mahomes had one of the NFL’s greatest quarterback seasons in his first year as a starter in 2018. We would have expected him to falter a bit after such a season, as has been the case with other historic passing performers. But something unusual is happening through the first three weeks of this season: He’s not only keeping the regression wolves at bay, he’s actually besting them.

Last season, Mahomes threw 50 touchdown passes, tied for the second-most ever in NFL history. He is one of only seven quarterbacks in history to exceed 5,000 passing yards in a single season. Kansas City’s 565 points scored were third-most in NFL history.

You’d think there would be nowhere to go but down. After all, no QB who has tossed even 40 touchdowns in a season has ever thrown more the following year. And the average dropoff in touchdowns has been 18.8.

But who says gravity always wins? Mahomes is on pace for 53 touchdowns and — hold on to your hats — 6,373 passing yards.

Even more impressive than Mahomes’s current TD pace are the yards. After Joe Namath first cracked the 4,000-yard barrier in 1967, it took 12 years (and adding two extra games) for anyone else to match it. Then, in 1984, Dan Marino topped 5,000 yards — a feat that would not be repeated until Drew Brees threw for 5,069 yards in 2008. Now, Mahomes isn’t just on pace to repeat 5,000 passing yards1, but to easily crack 6,000. No quarterback has come within 500 yards of that mark. And if Mahomes keeps his 2019 pace, history tells us that it could be decades before anyone does it again. 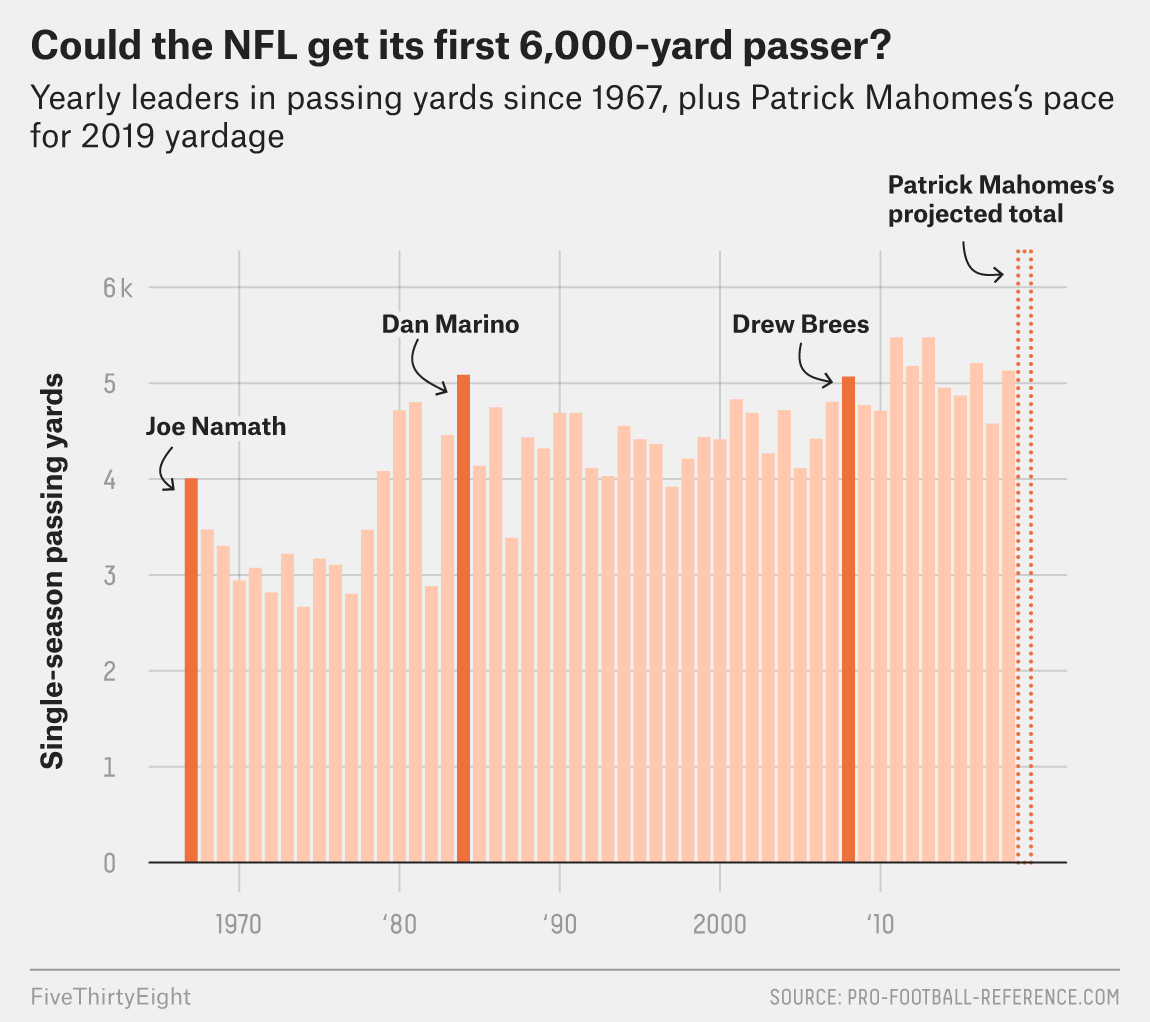 Mahomes’s has been relentless in his pursuit of all-time passing records. He’s posted 14 consecutive games with two or more TD passes, just one shy of Peyton Manning’s record spanning the 2013 and 2014 seasons. And he’s started the season throwing for more than 350 yards in each game, which is also just one short of the record — four games — shared by just two quarterbacks: Matthew Stafford (2011-12) and Drew Brees (2011). The Chiefs and Mahomes are at Detroit on Sunday to face Stafford and the Lions, who are ranked 22nd in passing yards allowed.

After failing to lead his college team to a winning record, few would have expected Mahomes — the 10th overall pick in the 2017 draft — to have such a historic start to his NFL career. I wrote in the Wall Street Journal at the time that a losing record in college is usually a bad harbinger for QB prospects. Former NFL coach Bill Parcells told me, “If you are going to be a very good pro quarterback, not even elite, you should at least have won most of your games in college.”

Mahomes’s college stats were good, for sure, but nothing that would have guaranteed greatness as a pro. In terms of passing efficiency, of the 1,162 qualifying quarterback-seasons of at least 300 passes from 2000 to 2016 (Mahomes’s last year in college), Mahomes’ final season at Texas Tech ranked 123rd, good for the 89th percentile. But he’s playing like a 99th percentile NFL quarterback.

We’re seeing the perfect merger of a quarterback with enormous arm strength (he threw the ball out of his home stadium), accuracy and a receiving corps that runs like a relay team. Sammy Watkins clocked a 4.43 40-yard dash, Mecole Hardman timed 4.33, and the injured Tyreek Hill ran a 4.26 at his pro day. Hill’s replacement, Demarcus Robinson, is slow in comparison with a 4.59 time, yet he already has three TDs and has averaged 23.9 yards per catch in his two starts replacing Hill. Have I mentioned that Mahomes is going to get Hill back soon? (He’s no longer in a sling.) And don’t forget that Travis Kelce is one of the game’s fastest tight ends, with a 40-yard dash time of 4.61.

And Mahomes has a head coach in Andy Reid who has tailored the offense to his quarterback’s strength: throwing downfield with uncanny accuracy. Consider that Mahomes this year already has 12 completions of 20 or more air yards (in 20 attempts), according to ESPN’s Stats & Information Group. That’s a pace of 64 for the season, which would shatter the record since 2001 of 39 shared by the Eli Manning (2011) and Blake Bortles (2015). And it’s on pace to nearly double the Chiefs’ deep-passing completions last season (37). Put another way, Reid’s scheme has enabled Mahomes to be on pace for more than 2,700 yards just on deep passes — that would be nearly double the record of 1,446 yards set by the 2011 Packers.

The Chiefs and Mahomes are taking their trademark deep passing game to even greater heights this year, and NFL defenses have not yet been able to tap the breaks on Mahomes’s aerial exploits. Mahomes — along with his receivers — has stayed more than a couple steps ahead of them. In the process, he could be creating a new magic number for NFL quarterbacks.

Should Colin Kaepernick be on an NFL roster?