We know which athletes are great, but we know less about what makes them great. To help, FiveThirtyEight is compiling The Greatness Files, a compendium of, well, what makes great athletes great. First up, a rising star named LeBron James.

This is not another LeBron James vs. Michael Jordan article. Whenever LeBron reaches another NBA Finals, sports fans are treated to a tired, picked-over argument about the best player of all time. But no definitive answer is reached, and the topic goes back into the freezer until media networks find a new reason to drag it back out.

But that debate obscures what, specifically, makes James so great to begin with:1 his seemingly infinite longevity as perhaps the best player in the world, and how he can change what he’s so good at to fit the needs of his team.

James has enjoyed a run of 15 consecutive seasons (and counting) in which he ranked among the league’s top five players, according to a combination ranking we cooked up based on MVP voting and our RAPTOR WAR metric.2 Just two other NBA players since 1977 — Hall of Fame guards Magic Johnson and John Stockton — have ever pieced together a run of 10 straight seasons or more as a top-five player, and neither had runs as long as LeBron.

Stockton was famously durable but finished without a single NBA title. Johnson won five championships, one more than LeBron, but logged nearly 500 fewer games between the regular season and playoffs. With almost an entire hand’s worth of rings to go with his nearly unparalleled record of superstar-level longevity, James has been the best of both worlds. He’s outlasted his elite contemporaries and somehow is still widely seen as the best player on the planet, even as other Terminators and Greek Gods — who are between about six and 10 years younger and in their prime — come for his throne.

That’s in part because LeBron has been great in so many ways — he changes his game every few years. At different points in his career, he’s been elite — if not the very best in the league — in virtually every facet of the game. He led the league in scoring as a 23-year-old in Cleveland before he had anything close to an elite supporting cast, and he is still a wildly efficient, unstoppable finisher around the rim. The soon-to-be 36-year-old just led the NBA in assists for the first time in his career (a mere 17 seasons in), and he has talked before about studying where, specifically, his teammates like his passes to be positioned in order for them to shoot more accurately. Recently, he joked (or didn’t) that new teammate Marc Gasol’s 2013 Defensive Player of the Year Award should belong to him. And while James hasn’t been a DPOY candidate in quite some time now, he’s shown he can still terrorize on that end when he truly wants to.

You can see how LeBron’s skill set morphed year to year in the charts below, which compare LeBron’s skill to the NBA’s high-water mark during his era3(the outermost circle) and the worst of the league during the season in question (the innermost circle). 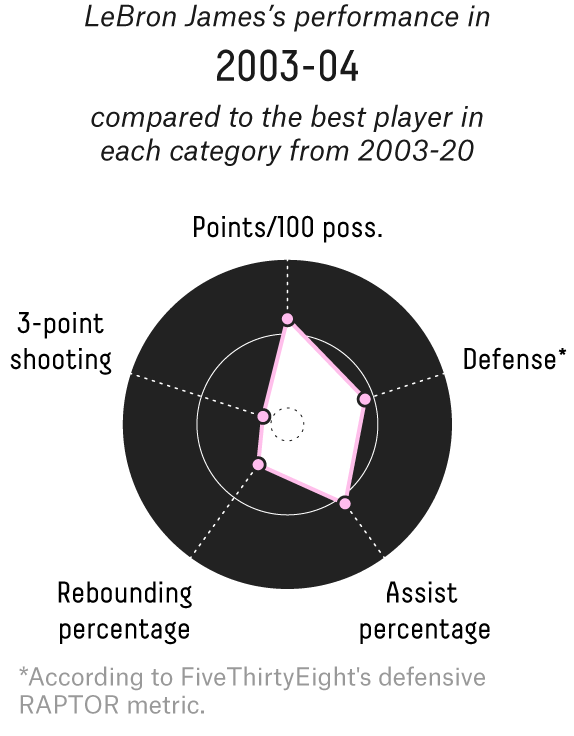 Baby LeBron was still pretty raw — as a 19-year-old, he was already doing surprisingly well in a variety of different areas, but nothing stood out as a dominant trait. And his shooting was quite poor, as James’s 29 percent conversion rate from downtown ranked fourth-worst among all qualified NBA players. Luckily, he had ample time (and talent) to improve. 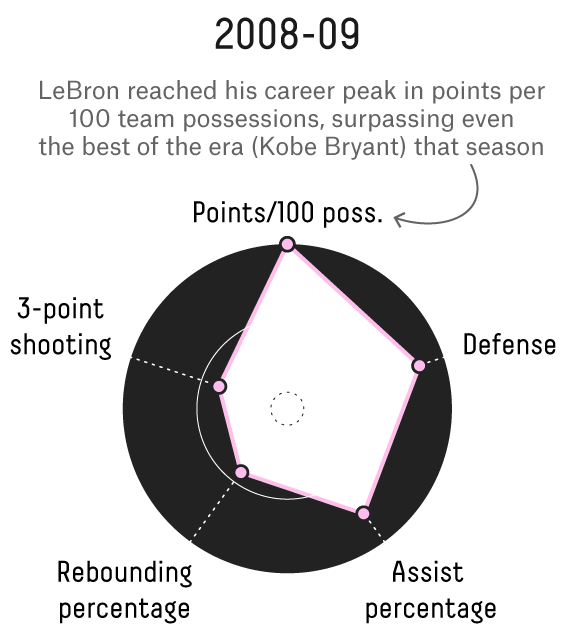 By 2008-09, LeBron was a very different — and much better — player than he’d been as a rookie. He’d started filling the basket with the same frequency as the best scorer of the era (Kobe Bryant), expanded his passing skills and even became one of the best defenders in basketball. But there was one area of LeBron’s game that still needed some improvement… 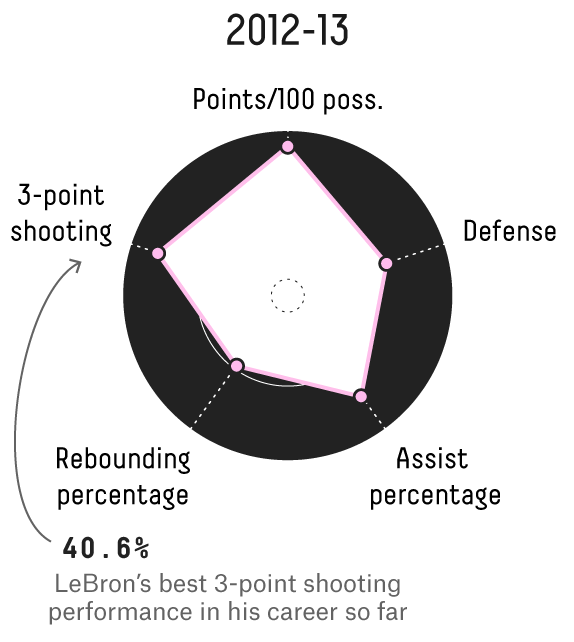 As great as LeBron was in 2008-09, the years that followed — after he left Cleveland for Miami — saw him push the boundaries of his full potential. While still scoring and passing at an elite level and playing good D, James set a career high for rebound rate … and finally became an elite 3-point shooter (knocking down nearly 41 percent of his shots from downtown). 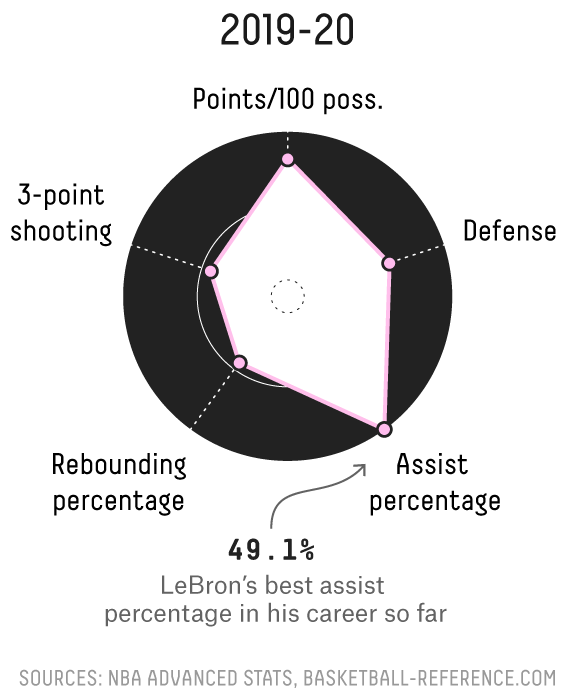 At the advanced age of 35, LeBron isn’t the same as he was a decade earlier. Though he still scores a lot, he had a down year shooting in 2019-20 and picked his spots more on defense. But James also showed he could be the most productive passer in the league — leading the NBA in assist rate for the first time. It was yet another evolution in a career full of them.

Speaking of James’s clap-on, clap-off skill set,4 arguably the most incredible development we’ve seen over LeBron’s career is the ability to go from being statistically the worst jump-shooter in the NBA midway through the 2015-16 season to being a pretty damn good one now. And not just that, but also being perhaps the most prolific long, long range shooter in basketball.

The ability to serve as an occasional marksman, along with having one of the league’s highest on-court IQs,5 explains why his slightly diminished athleticism6 hasn’t hindered him yet. Even if he couldn’t get to the rim and elevate over folks anymore (which, he still can), he’d be able to shoot well enough to compensate.

Between having a Magic-like ability to see the floor and pass the ball, the imposing physical presence of a Karl Malone, shooting range that’s comparable to Stephen Curry or Dame Lillard and on-court smarts that rival Chris Paul’s, LeBron is a scary-ass, Frankenstein of an NBA player. He’s made up of many of the best players’ best attributes, all wrapped up in one of the most hyperathletic, runaway freight-train packages the NBA has ever seen.

LeBron’s greatness isn’t just captured in the numbers, either. One thing that consistently stands out when watching LeBron is how much everything in his peripheral space — the nine other players on the court, coaches shouting from the sidelines and thousands of fans7 — seemingly slows down or stands still for him. Much like Minority Report, where Tom Cruise’s character can see the future play out,8 a lot of James’s brilliance stems from seeing things unfold one or two steps ahead of everyone else.

Ex-teammate Iman Shumpert still finds himself amazed with how James is able to direct traffic and move chess pieces around to confuse and manipulate defenses to his liking, then pick them apart with a perfect pass once they’ve strayed too far from where they should actually be.

“There’ll be times where he’ll say, ‘Shump! If he move, cut right behind him! Cut right behind him if he move!’” Shumpert has said. “And everything he’s saying, you just watch it happen. And the moment [the defender] flinches, [I’m cutting for a] catch and dunk.”

James has basically made time stand still as the king of his sport for nearly a decade and a half. That explains his greatness more than anything else.