Even though they held a one-point lead with just more than a minute left in Game 4, Kawhi Leonard and the Toronto Raptors found themselves with their backs against the wall on Sunday in Philadelphia.

The Sixers and their raucous home crowd at Wells Fargo Center could almost taste a victory, one that would have given them an enormous 3-1 series advantage over Toronto heading into Game 5. And they would be accomplishing that despite getting a poor scoring effort from Joel Embiid, who was under the weather for the second time during the series.

But as the clock ticked down to that final minute, Leonard, who’d gotten almost everything he’d wanted Sunday, had other plans. He used a screen from teammate Marc Gasol, and four dribbles to his right, but both of Philly’s pick-and-roll defenders — Embiid and Ben Simmons — opted to follow Leonard to the right wing. Where another player might have passed the ball, Kawhi chose to elevate, lofting a rainbow 3-pointer over the outstretched left arm of the 7-foot-2 Embiid.

Aside from all but assuring that Toronto would knot the best-of-seven series at two games apiece, the shot punctuated yet another virtuoso performance by Leonard, who logged 39 points on 13-of-20 shooting and 14 rebounds, and is so far having one of the most efficient postseason runs we’ve ever seen from an NBA player, let alone a wing player specifically.

In this series against Philly, Leonard is somehow averaging 38 points on 62 percent shooting, with a perfect-looking shot chart. He’s drained an unthinkable 21 of his 24 uncontested shot attempts through the four games, including hitting 6-for-6 on Sunday. 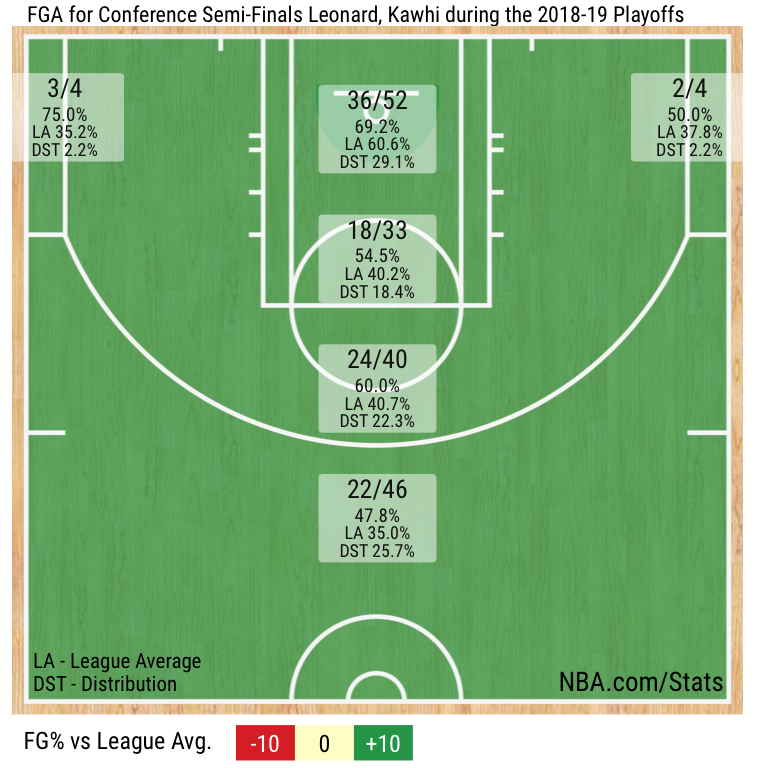 Leonard did all this while continuing to have an impact on the defensive end, where he held Simmons in check during the first half before sliding over during the third period and heavily limiting swingman Jimmy Butler, who had scored efficiently up until that switch occurred.

Leonard wasn’t solely responsible for Toronto’s win Sunday. Gasol — who’d been held to eight points or fewer in Games 1-3 — was more aggressive and finished with 16 in Game 4. Similarly, Kyle Lowry looked for his shot early and finished with 14 points after having just seven in Game 3. Danny Green was a perfect 8-for-8 from the line. All of these contributions were helpful in light of Pascal Siakam, arguably Toronto’s second-best player, shooting 2-of-10 from the floor while playing through a calf injury, and Serge Ibaka being the only Raptor to score off the bench.

But make no mistake: Kawhi has played as if he were content to do this all by himself if need be. And in many ways, that spectacle is still noteworthy considering how far a cry it is from what Leonard was earlier in his career, before he became a clear-cut franchise player.

During this postseason, just 33 percent of Leonard’s baskets have been assisted, according to NBA Advanced Stats, while the other two-thirds have been self-created. Snapshots over time illustrate how that’s flipped almost entirely, as he’s become more of a 1-on-1 player. During the 2012-13 regular season, for instance, 65 percent of Kawhi’s makes were assisted. That share of assisted baskets dropped to 54 percent during 2014-15, and to just under 48 percent in 2016-17 before dwindling to just a third during these playoffs.

The question to raise here, of course, is whether it’s possible for Leonard to keep this up. He can’t keep shooting 70 percent from midrange when he was a 46-percent shooter from there during the regular season, right?

On some level, the answer to that may depend on whether the Sixers are willing to be more aggressive about forcing the ball out of Leonard’s hands. We’ve written before about what makes Leonard so different from the other stars in the NBA (aside from how mysteriously quiet he seems to be): He does just about everything at an above-average level, while defending and scoring better than almost anyone. But if there’s one area to test, it’s his playmaking, which generally pales in comparison to LeBron James’s or even Kevin Durant’s. (Both contemporaries regularly enjoy 2-to-1 assist-to-turnover ratios, while Leonard has yet to post such a season.) Leonard, who had five assists and seven turnovers Sunday, has closer to a 1-to-1 ratio this postseason, with 31 assists and 29 turnovers so far.

Going one level deeper, Kawhi was the NBA’s least efficient wing player1 this past regular season when opposing defenses either blitzed or trapped him in pick-and-rolls, with the Raptors scoring just 0.46 points per chance in such situations, according to data from Second Spectrum.

So while Philadelphia hasn’t been able to stop The Terminator-like Kawhi yet, the Sixers at least have something they can try in hopes of slowing him down as the series moves back to Toronto.