Tom Brady, Super Bowl MVP; Tom Brady, NFL icon; Tom Brady, scofflaw. The Deflategate punishments have been handed down by the league office, and the official report on the incident refused to speculate about whether the New England Patriots got any advantage from their deflated balls, saying: “It is impossible to determine whether this activity had an effect on the outcome of games or what that effect was.” But suspending Brady (and taking away draft picks) is almost sure to have an effect.

The Patriots owe the league $1 million, one first-round draft pick in 2016, and one fourth-round draft pick in 2017. All of that for “violation of the playing rules and the failure to cooperate in the subsequent investigation.” Meanwhile, for “conduct detrimental to the integrity of the NFL,” Tom Brady — the Patriots’ reasonably well-known quarterback — received a 4-game suspension, which he is planning to appeal.

The best spin on this news for Patriots fans is that Brady’s value is relatively unknown. While he has a history of great accomplishments and stats, QB success is much more of a team accomplishment than an individual one. Unlike certain other quarterbacks who have played for multiple teams and multiple coaches, Brady has only played for Bill Belichick’s Patriots. We don’t know if the Patriots would collapse without him — the one season where he missed significant time (in 2008), the Patriots went 11-5 with Matt Cassel under center.1 The Patriots’ backup quarterback, Jimmy Garoppolo, actually had a higher passer rating than Brady last year, though he only had 27 attempts and was sacked five times.

But while I don’t know what Brady is really worth, I can lay out a couple of estimates and see what the effects of his suspension might be. Let’s use history as our guide and look at the past 14 years to see what might have happened had Brady been forced to sit the first four games of each season.

While I’m not always in love with how Vegas values QBs, it’s a decent place to start: According to RJ Bell of Pregame.com, the betting line in the Patriots opener against the Steelers has shifted by about 5 points, though Bell claims gamblers usually consider Brady’s value to be closer to 7 points. So for this first test, I took each game that Brady played for the Patriots in the first four team games of each season and took away 6.5 points. In other words, if the Patriots won by 7 or more, I assumed that they would have won even without Brady, while if they won by 6 or less I counted it as a loss (if he didn’t play, I left the result as is). I then re-jiggered the playoff standings to see how the Patriots’ new record would have affected their playoff position each season. This recalculation cost the Pats eight wins since 2001, knocked them out of the playoffs in 2005 and 2009, and cost them a first-round bye in 2013.2 However, it also leaves all of their Super Bowl-winning seasons unscathed: 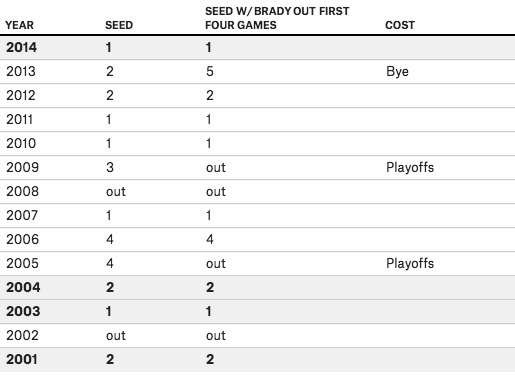 But that version of this examination is probably too granular. In the Patriots’ four games without Brady, there are only so many outcomes — they can only win zero, one, two, three or four games with or without Brady. While technically every swing has some probability (they might have won zero games with Brady but now win four games without him), the most likely effect is that the Patriots drop zero or one games — that’s the outcome the 7-point estimate produced in 10 of the 12 years in which Brady played in all of the season’s first four games. That is, if they would have gone 3-1 with Brady, without him they’d probably stay at 3-1 or drop to 2-2. Now let’s focus on the most likely negative scenario. What would happen if we just took one teensy-tiny win away each season? 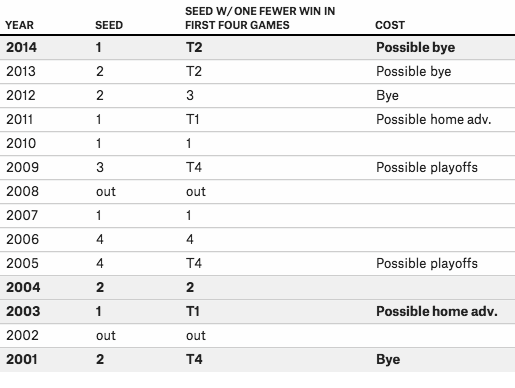 This one looks a lot worse. If you took one win away from every Pats team since 2001, not only could they have missed the playoffs two more times (depending on whom they lost to), but they would also lose a playoff bye at least twice and possibly four times, again depending on which game they lost and by how much. It’s also probably worth noting that the 2008 Patriots, who had Brady for less than one quarter of one game, would have been a No. 3 seed if they could have squeezed out one more win, or even been a bye team if they managed two more wins. Instead, they missed the playoffs.

More importantly, losing one more game would have had negative effects on New England’s playoff position in three of its four Super Bowl-winning years. And that’s why four games of Brady might be even more valuable than the draft pick — to the Patriots. For most teams, a first-round draft pick is probably worth more than a single win. But if that one win is crucial to your Super Bowl chances, you take it.