This is review No. 9 of 16 in the first round of our competition. Each review will compare four burritos, with my favorite advancing to Round 2.

This week marks the beginning of my journey through the area we’ve defined as the Northeast, where I run up against the original Burrito Bracket and a surprise in the Great Plains. 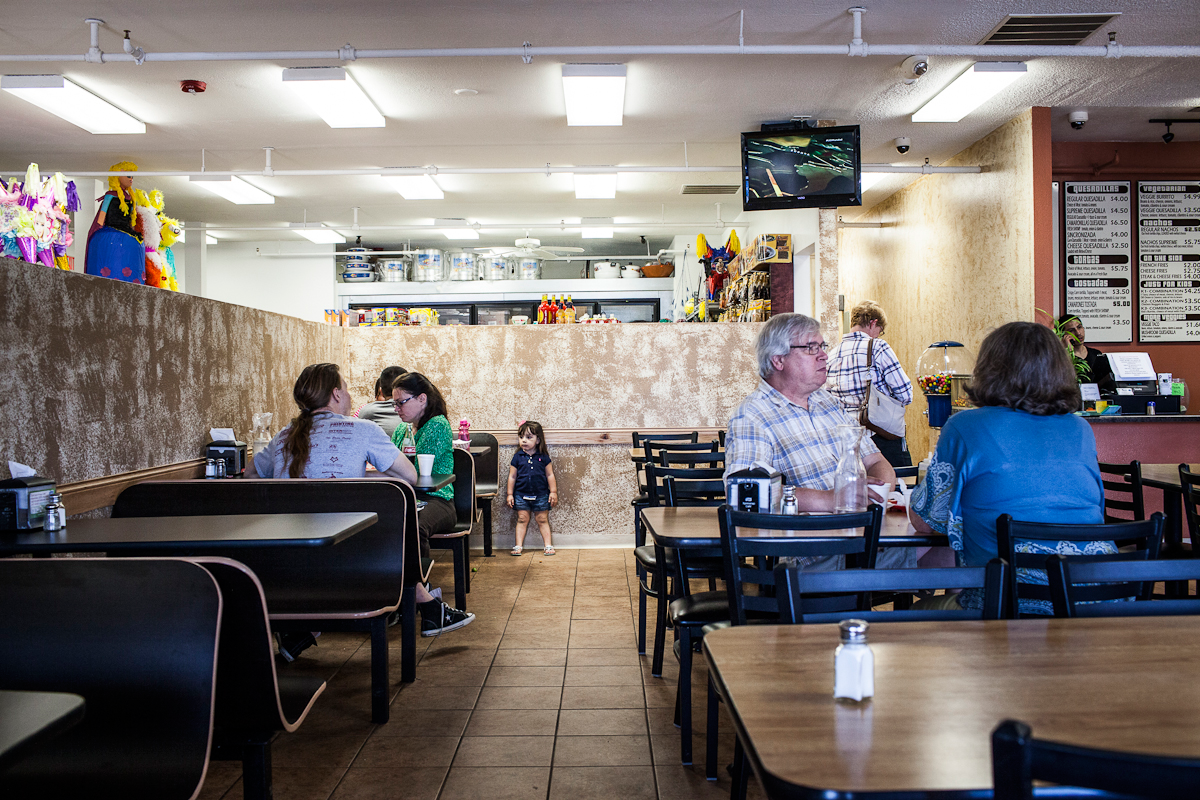 Located in a strip mall a half-mile southeast of the University of Iowa campus is La Michoacana, part restaurant, part grocer. Based on the Yelp reviews I’d read (ones that had earned the restaurant a place in the bracket), I came expecting a college town burrito that was better than average, something heavy on calories, tasty, but geared toward a wide range of palates. What I found was something very different.

I asked the folks behind the counter what I should have in my burrito, and they suggested steak, but said the fried pork and the marinated pork were also good. Admittedly, I look like a 20-year-old Midwesterner who might need an education in Mexican cuisine, so I could understand their efforts to explain carnitas and al pastor. But it dawned on me how little information these English translations provide, how they rob the preparations of their pre-pan-frying braising or citrus marinade.

This interaction and others led me to the conclusion that when Midwestern hospitality and Mexican family values combine, they create some of the nicest people you’ll ever meet. The service was outstanding at La Michoacana. Even though I ordered at the counter and chose a seat, workers stopped by to see if I needed anything, helped clear up my booth, and just said hello, all without being overbearing. Most of the workers seemed to be related to one another, taking turns sitting at a table in the corner with the elders, eating, counting tips and chatting, all clad in La Michoacana T-shirts. Heroes del Silencio and other Spanish-language heavy metal bands played from the speakers in the kitchen.

But the surprise — because I was basing my expectations on Yelp reviews — was the quality of the food, and its bend toward traditional Mexican flavors and preparations. It was a no-frills carne asada burrito, but inside I found orange rice flavored with hints of tomato and cumin, thick slices of white onion and fresh lettuce adding crunch to each bite. Salty chunks of steak were enveloped in thin tangy crema, a welcome surprise this far north of the border. The tortilla was too thick and had a couple inches of excess diameter, and the vanilla-laden horchata was more aromatic than I care for, but this was a carefully made burrito in the tradition of the greats south of the border.

A high white wall around the dining room separated it from a grocery store on the other side. Shelves stocked with spices, sauces and sundries from Mexico made me long for my kitchen, though I doubt I could ever cook up anything as delicious as La Michoacana’s burritos. 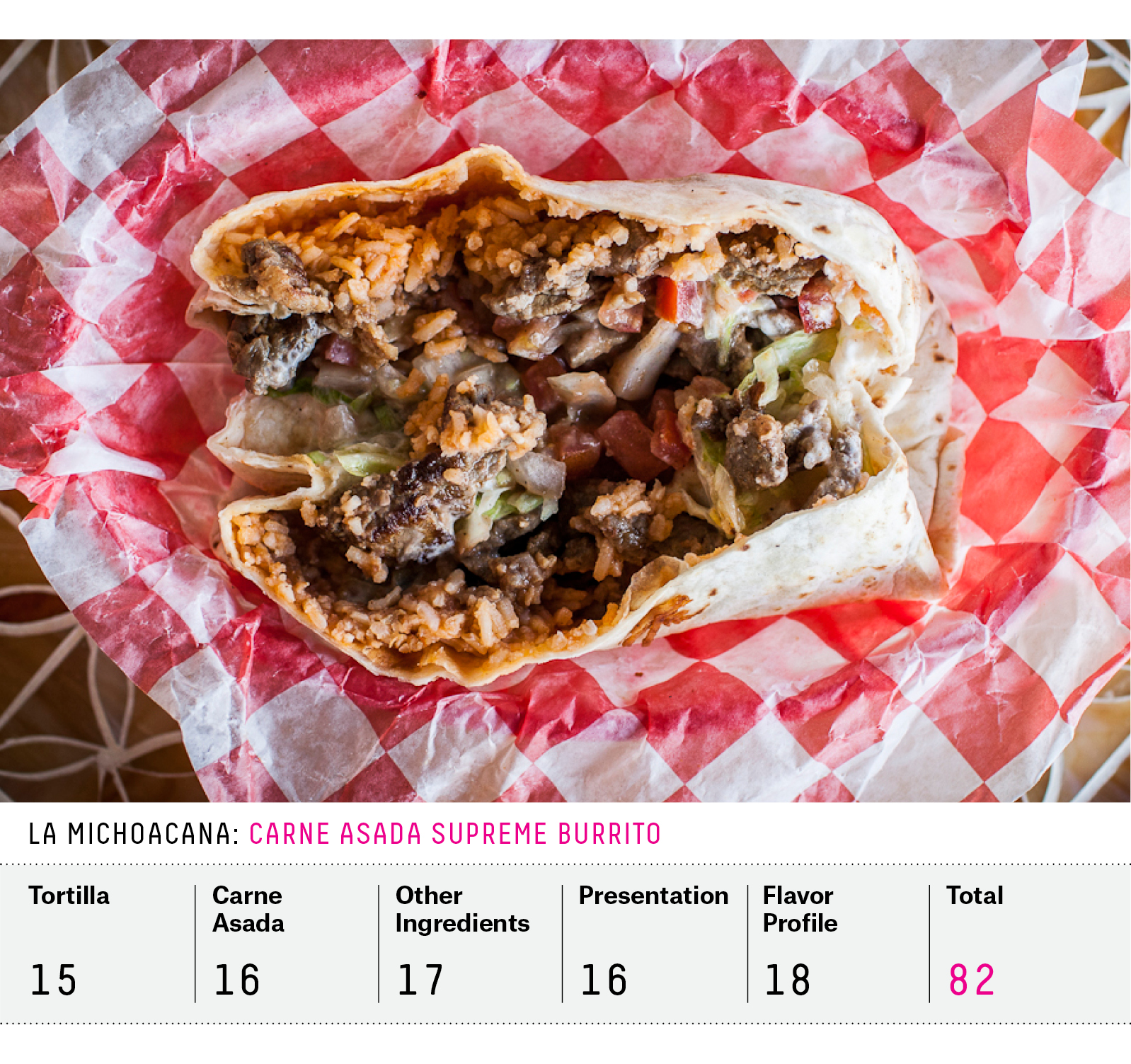 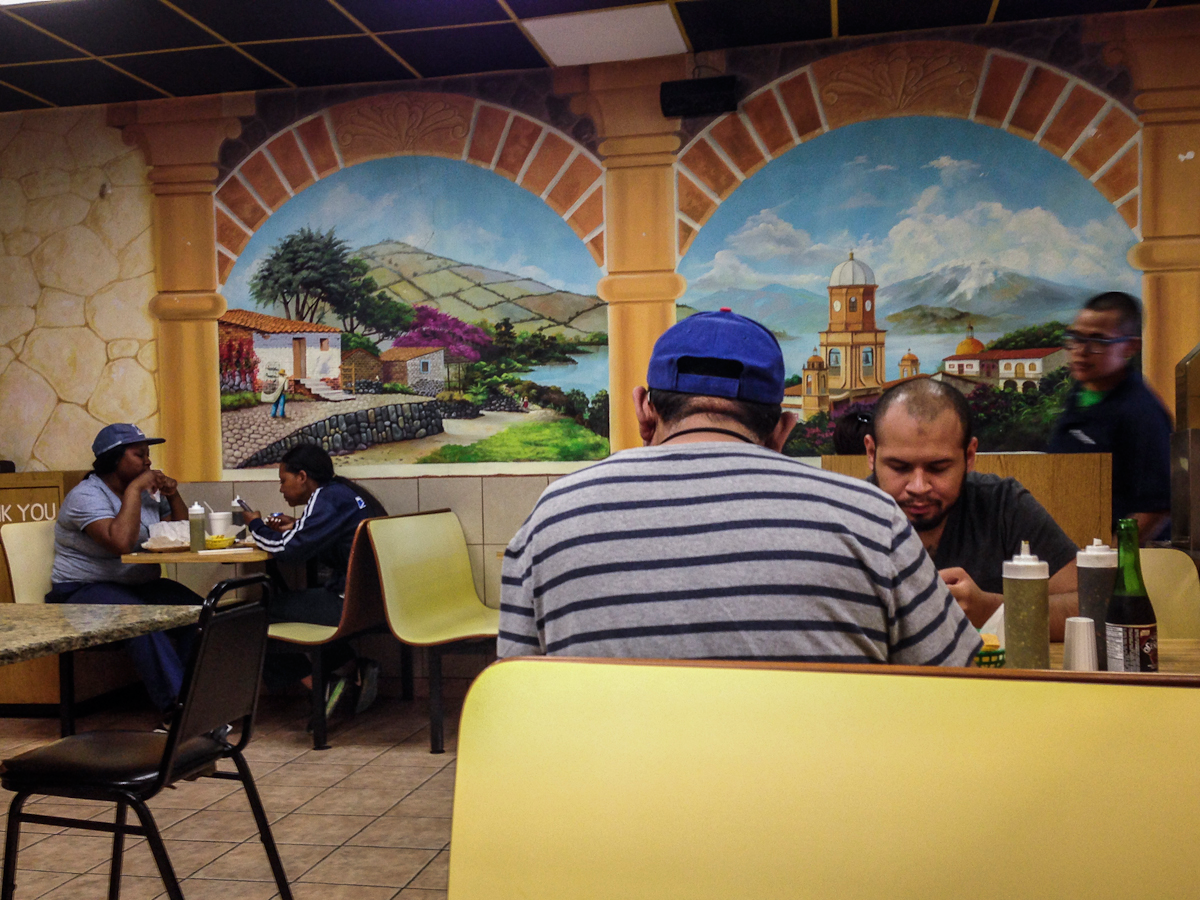 I arrived in the Windy City on a glorious day — it was cool, appropriately breezy, with crystalline blue skies overhead. I walked the mile from my hotel to Wicker Park, more specifically to the headquarters of La Pasadita‘s empire. On the 1100 block of Ashland, between Division and Haddon, sit not one, not two, but three La Pasadita locations. The restaurants basically own the block, at least in spirit.

As with Bell Street Burritos in Atlanta, I knew just what to order. Even in his original burrito bracket, when La Pasadita was the favorite to win, El Padrino Nate Silver had directed readers to the Regular Carne Asada Burrito, a fresh tortilla packed tight with just three ingredients: carne asada, cilantro and onion. Nate isn’t the only one hip to the joys of La Pasadita’s carne asada; it’s been a favorite of Chicagoans for decades.

Though Nate’s original reviews told me to sit down and wait for a menu, I was still confused when I walked in, and lingered by the register until a woman behind the counter asked if my order was to stay and ushered me to a seat. Yellow booths and a few stone tabletops sit against a backdrop of faux-painted stone walls and murals of pastoral scenes. The lunch crowd was small but diverse that day, a few families, local workers, a young Frenchman reading a book in the corner.

Two squeeze bottles of salsa were brought to the table, one green, one darker green. The salsas were freshly made, with seeds and pieces of jalapeño visible through the clear bottles. They were not only the perfect complement to a heaping basket of crisp, salty tortilla chips, but also a delightful addition to a spartan burrito. Inside a thin, pliable tortilla, a hundred or so small pieces of charred, grilled beef intermingled with finely chopped raw onion and cilantro. The meat had a tough, grilled exterior that melted away as I bit into it. Its reputation — and its place as the No. 1 seed in our Northeast region — is well earned.

I wouldn’t dare question El Padrino’s taste, but some readers might prefer the Supreme version, which also has cheese, sour cream, lettuce, tomato, guacamole, and rice. The endless supply of smoky meat in the basic version was more than this burrito correspondent could take on at midday, though for $8 it’s an incredibly affordable meal for two. 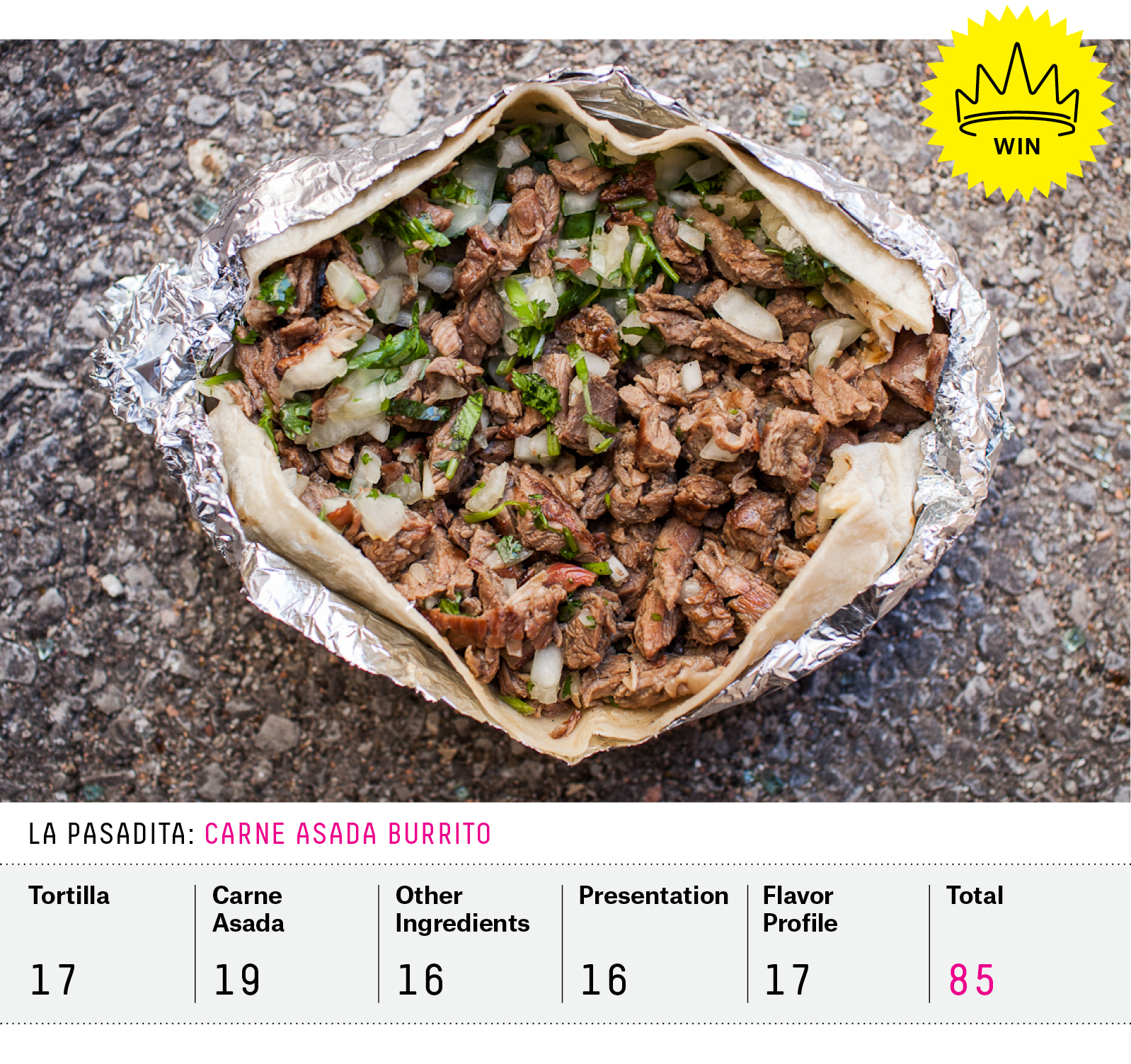 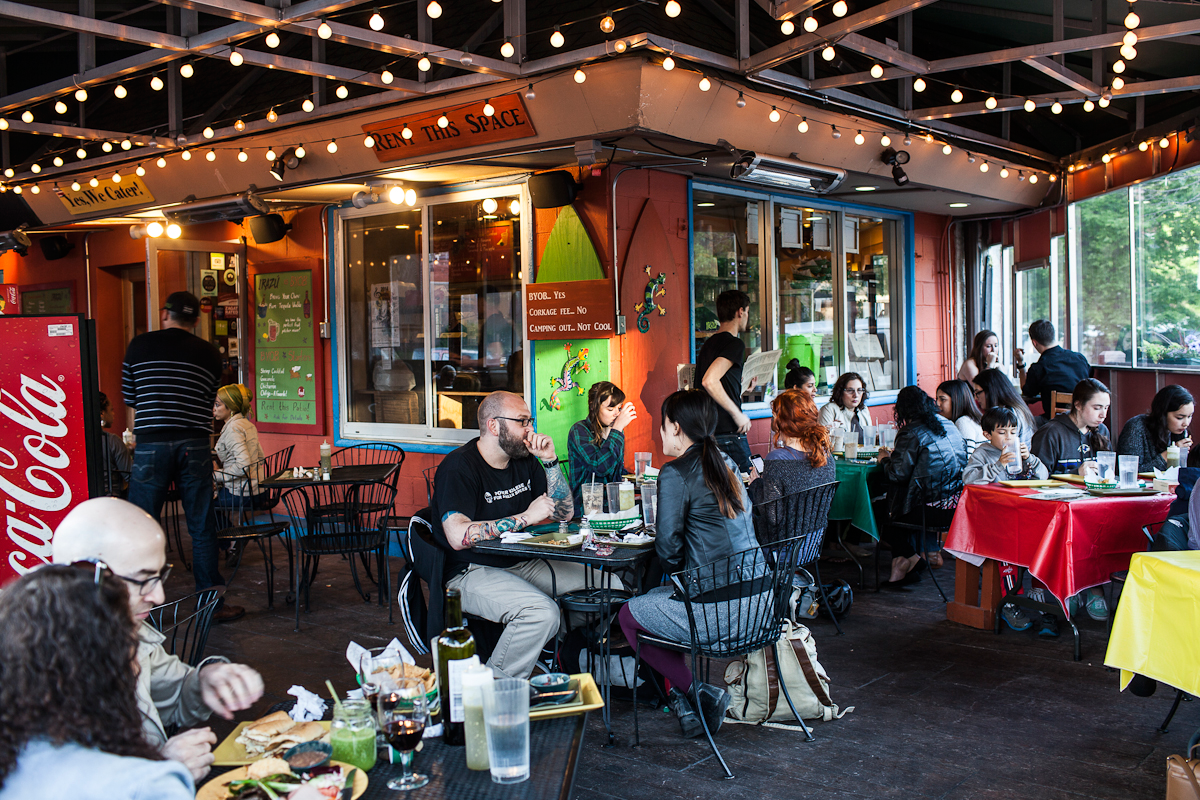 I stepped out of La Pasadita in search of an alley to dissect and photograph my burrito in private, and immediately ran into an old friend I know from Central America. Naturally I couldn’t let a coincidence like that go to waste, so I invited him to join me for an evening burrito, conveniently scheduled at a Costa Rican joint. He, in turn, invited a few friends. When they showed up at Irazu to meet us, they announced they were just there for drinks, because they’d already eaten and couldn’t possibly consume another morsel. What ever could have left them so full? A tip from Nate Silver’s original burrito bracket, of course! They’d gorged at a different taqueria earlier in the day. I was speechless.

Here’s the lowdown on Irazu: It serves a popular burrito, but that’s not why people go there to eat. A beautiful outdoor patio strung with lights and murals of volcanic scenes at indoor tables are the superficial draw. On the culinary side, chicharron — cut in thick slabs, fried and crunchy on the outside, soft and chewy inside, and served with a side of potent garlic sauce — is the restaurant’s shining star. According to my waiter, the burritos are an aside, and his least favorite item on the menu, but people love them anyway. Let me just say, they don’t eat burritos in Costa Rica.

The tortilla was beautifully griddled, but the ingredients were bland slices of steak, iceberg lettuce, tomato chunks and avocado slices. It was uninspired, but simple enough to be tasty and light. The ambiance more than makes up for any burrito deficiencies if you’re not set on a life-changing culinary experience.

A chalkboard next to my table listed the top 10 sites to visit in Costa Rica, and the tables were covered in a particular red plastic that had me wondering if I’d been magically transported to Central America. Most important, and much to my delight, I was able to order the burrito with a side of Lizano Salsa, a Costa Rican condiment I grew to love while living in Nicaragua. It’s made of a lightly sweetened combination of vegetables, cumin, black pepper and turmeric, and used in abundance on dishes revolving around meat, beans and rice.

Note: Irazu is BYOB and cash only. A block up from the restaurant there’s a bodega under the elevated train with a decent selection of midwestern brews. 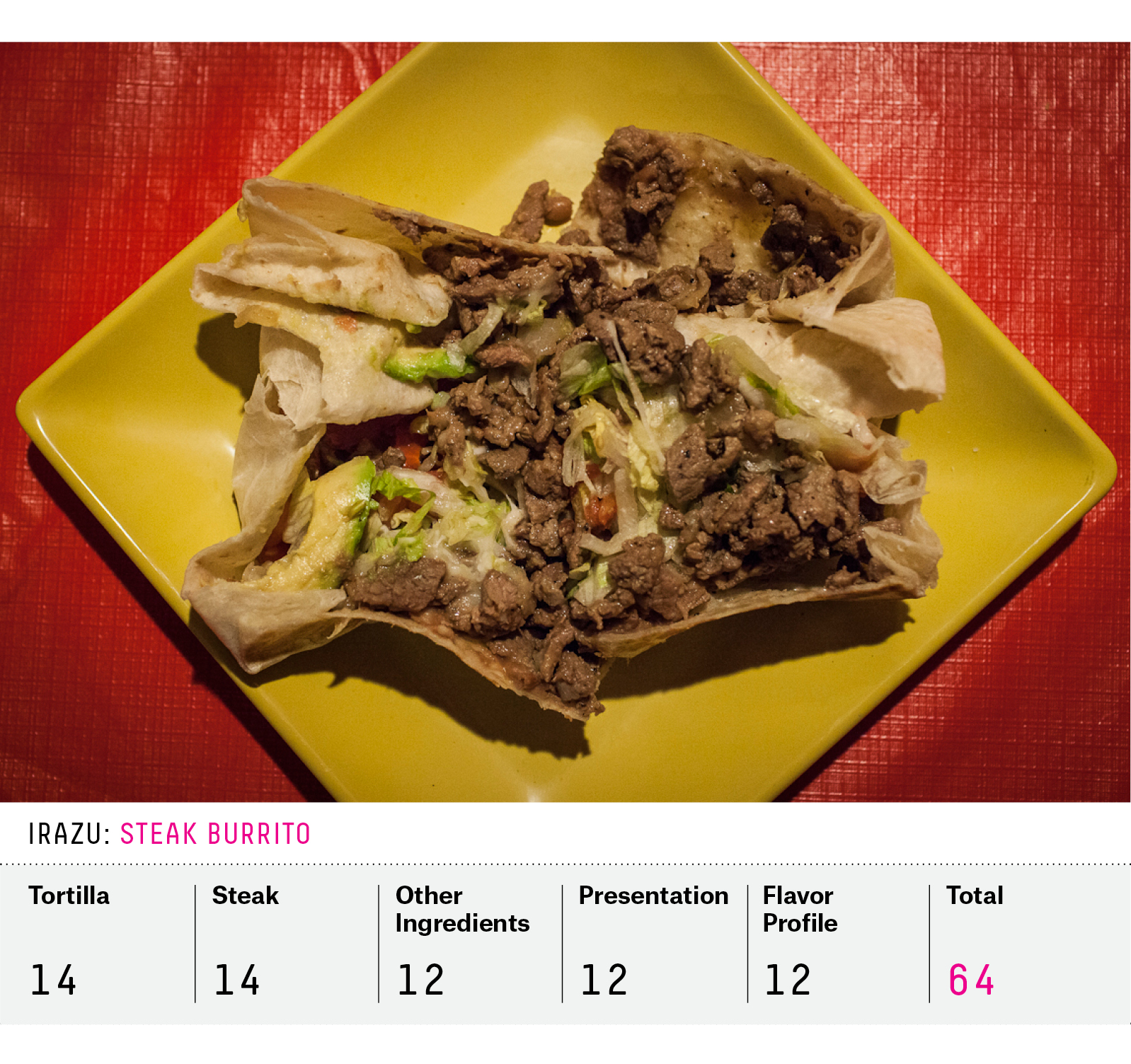 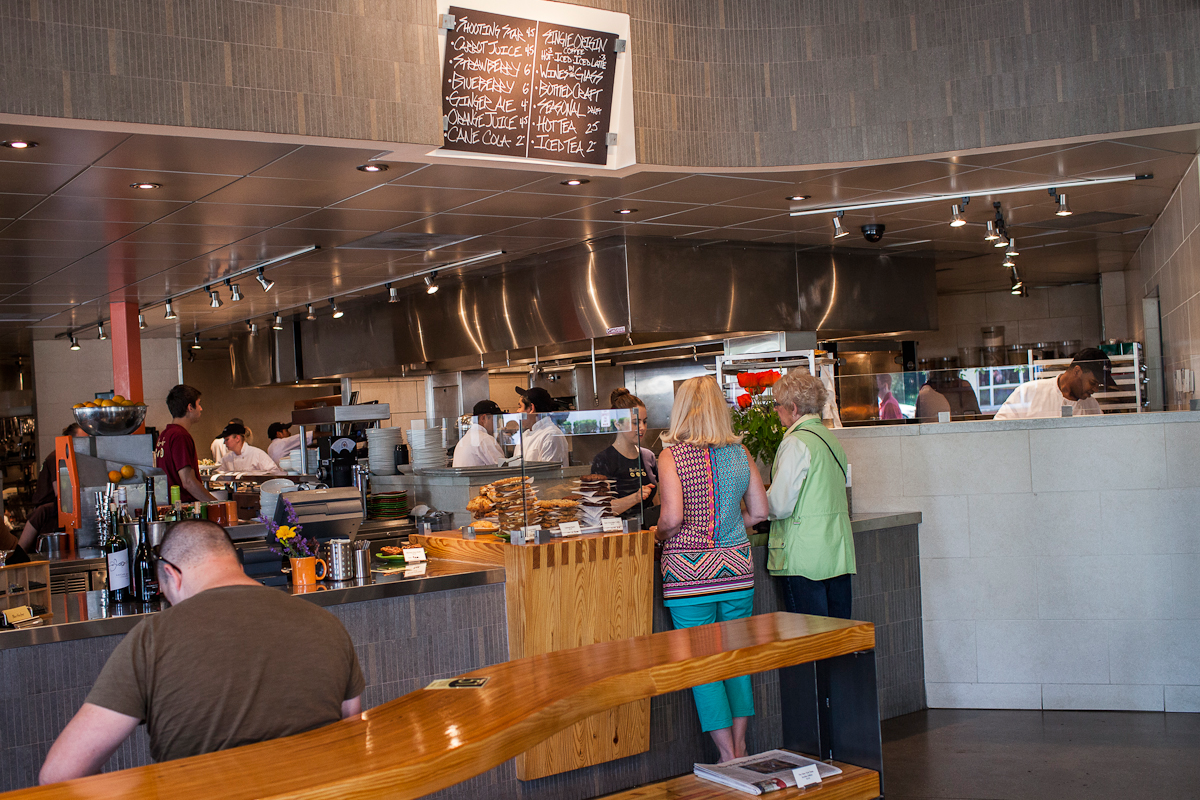 Although Yelpers most often rave about the basil-flavored burritos at Northstar Café, on Sundays the place offers only the Big Burrito, its riff on a breakfast burrito. My first visit fell on a Sunday, so a breakfast burrito it would be. There are three locations; I visited the one in Beechwold on the north side of the city. On arrival, you order at a counter then take your number to a seat, where the wait staff will find you. The service is not hands off, however. I had frequent visits from staff to clean up and check how I was doing.

The decor is clean and modern, with white walls, grey tiled floors and exposed wood. In the middle of the indoor dining room are a handful of booths large enough to seat 20 people each. An outdoor patio at the front of the restaurant was packed with big groups and families who’d come from church.

My burrito was made of an orange tortilla wrapped around sweet potato, black beans, sauteed red pepper and onions, a fried egg and cheese. The sweet potatoes were almost caramelized, making them incredibly sweet. The egg was a pale golden yellow in the middle, fully cooked but delightfully soft and powdery. The black beans brought some much-needed salt to the dish, but the red pepper, onion and sweet potato combination made it too sweet overall for my taste.

After the meal, I walked back up to the counter to get a juice to go. A mother-daughter combo behind me exclaimed, “See, she’s got her camera with her, how am I going to document my food?” “You can use my phone, mom,” replied the daughter with a huff so severe I was pretty sure I heard her eyeballs rolling around. One thing I have learned about Yelp is that it’s made photographing one’s food in public spaces far less suspicious or awkward.

I happened to pass through Columbus again, this time during the week, and stopped by to try the famous basil burrito with tofu. The tofu comes in thick chunks bathed in a creamy pesto-like sauce. It’s tasty, and very healthy. But in the end, I preferred the breakfast option, so that’s what I’m rating here. 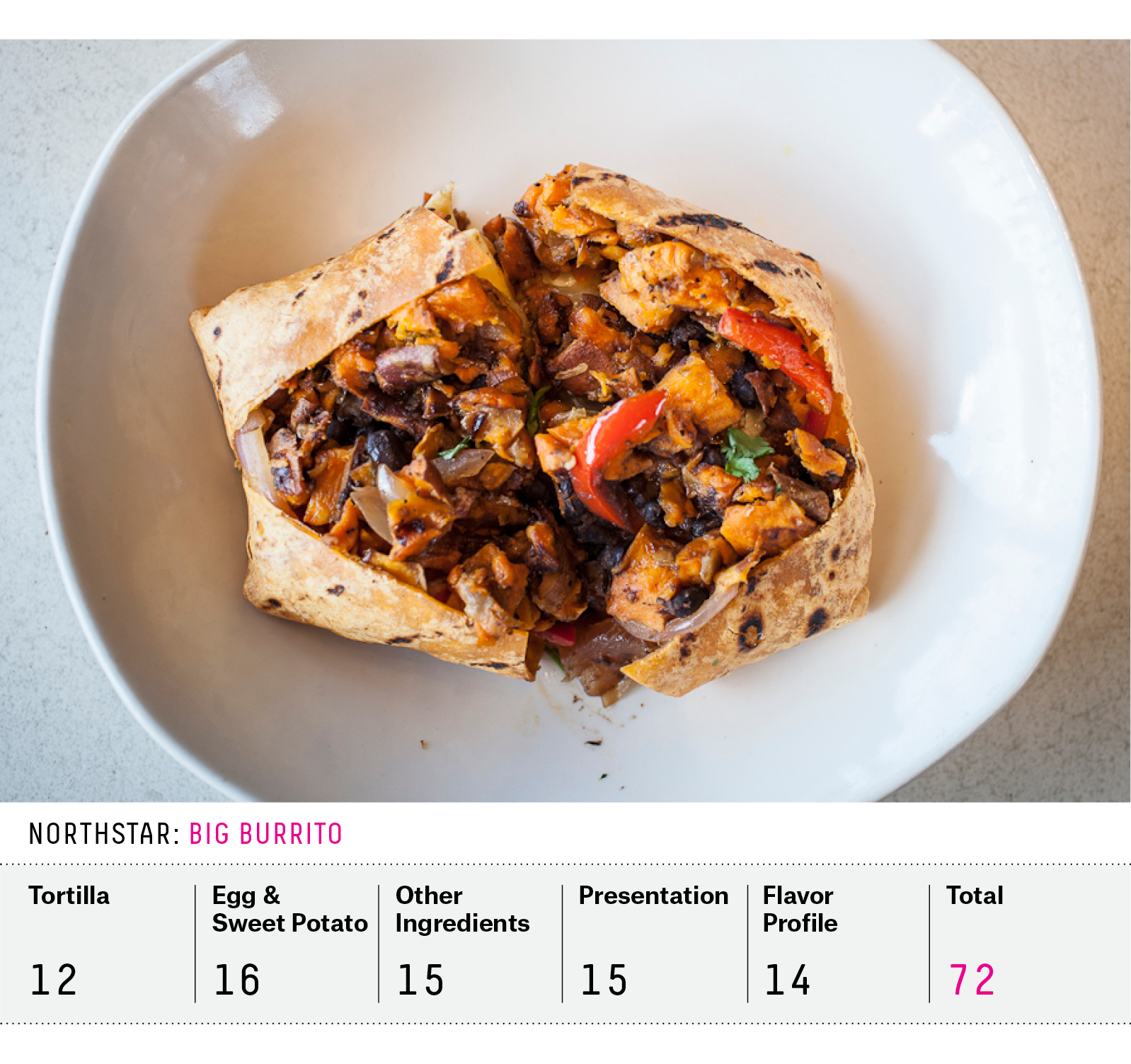 While it brings a tear to my eye that I won’t be headed back to Iowa City for the second round, La Pasadita won this one on the quality of its carne asada, which is a force to be reckoned with.