Inflation data for April showed consumer prices rising 0.3 percent compared to March, and 2 percent from a year ago — the first time it has hit that level since July of last year. The less volatile “core” CPI index (which excludes food and energy prices) also rose a bit to 1.8 percent year-over-year growth.

Economists and policymakers at the Federal Reserve have grown concerned about persistently low inflation, seeing it as a sign of economic weakness. These latest CPI numbers, however, should provide support for the Fed’s continued “tapering” of bond purchases — and further expedite the “renormalization” of monetary policy. 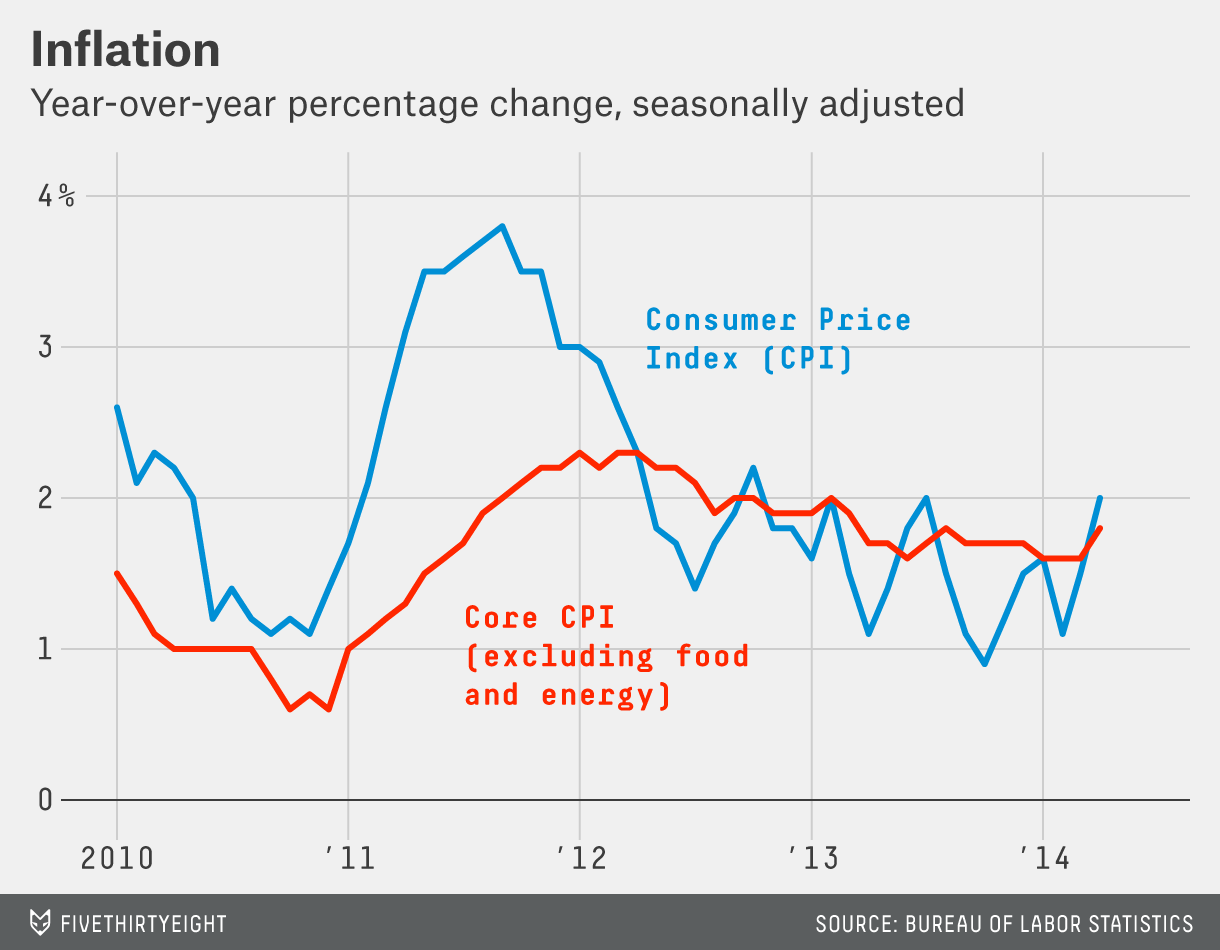 That is, unless the broader economy begins to weaken, as the other data released Thursday morning may indicate.

The industrial sector — representing manufacturing, utilities and mining — had been a strong driver of the economy after the recession ended in June 2009. In the following two years, industrial production rose more than 11 percent cumulatively.

But the latest reading, for April, shows production fell 0.6 percent, the largest one-month drop in nearly two years. Several observers have noted that the numbers may have been distorted by warmer weather in April (which followed a very cold March), because utilities fell 5.3 percent on the month. In other words, households and businesses had greater need for heating through March, but that declined dramatically in April. Smoothing over the last three months shows no significant weakening trend (production is up 0.5 percent over that period). Stay tuned to see if production is truly weakening, or if this latest number is a fluke. 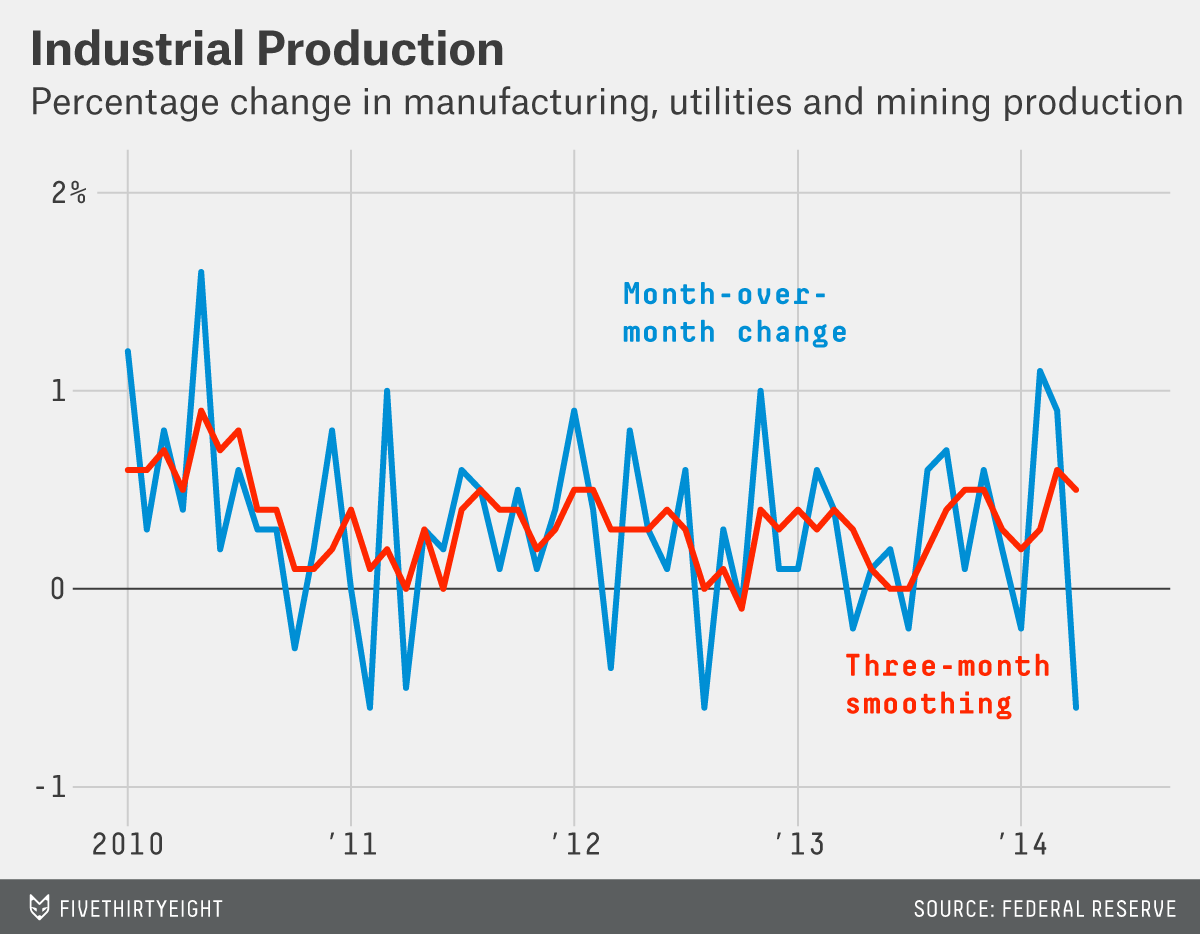 Each month going back to 1985, the National Association of Home Builders (NAHB) has surveyed its members to create an aggregated Housing Market Index (HMI). The HMI, published in conjunction with the bank Wells Fargo, is a “diffusion index” that combines three indicators: a measure of buyer traffic, a gauge of current sales conditions, and sales expectations over the next six months. In the HMI, any index value over 50 indicates more builders perceive conditions as good rather than bad.

The survey data is put out mid-month, so Thursday’s release covers May. The index fell to 45, the lowest level in a year. 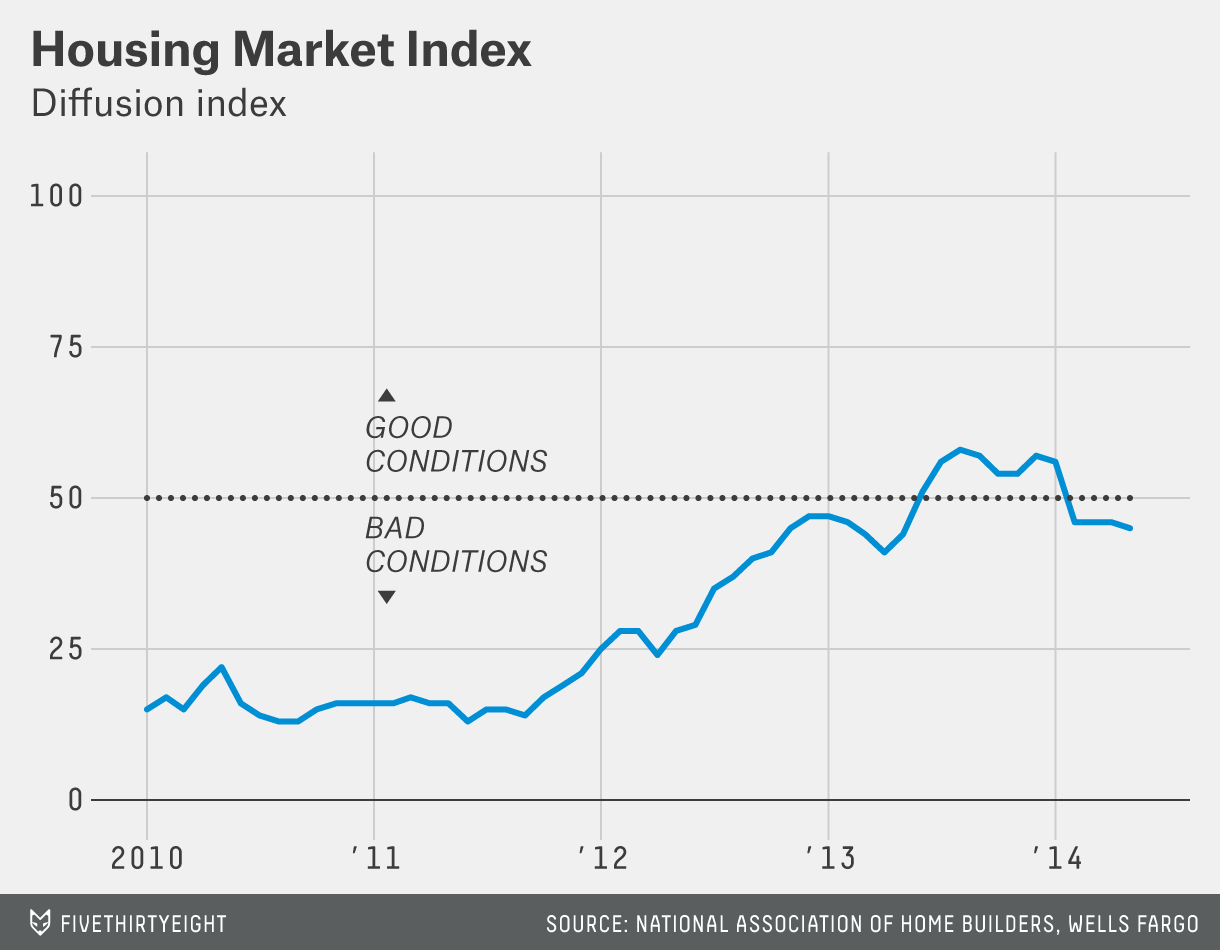 In her recent testimony before Congress Fed Chairman Janet Yellen pointed to petering growth in the housing market as a cause for concern, saying housing activity has “remained disappointing so far this year and will bear watching.”