In Argentina’s final match of the World Cup, Lionel Messi — on whom Argentine hopes have rested for over a decade — only touched the ball at a rate of once every two minutes. One of those touches was a great opportunity to win the game near the end of regulation, which he failed to even put on goal. Despite this, and despite a decrease in goals and assists as the tournament progressed (four goals in his first three games, an assist in his fourth, and nary a goal or assist since), he won the World Cup’s Golden Ball award (essentially the tournament MVP). That prompted Diego Maradona, Messi’s Argentine forefather and foil, to say, “It’s not right when someone wins something that he shouldn’t have won just because of some marketing plan.” The sharply worded op-eds, so plentiful on Sunday and Monday, are dying down — for now — but even Messi’s fans may start to wonder what was going on, and whether Messi was playing like his usual self.

Before Sunday’s World Cup Final, Messi’s father, Jorge, told the media that his son was struggling with exhaustion.1 This dovetails nicely with another story I’d been reading about for weeks, about how Messi’s “work rate,” or the amount he has been running on the pitch per minute, has been abnormally low during this World Cup. Here’s a quote from an ESPN article that touches on both subjects:

The pressure of being captain and carrying the hopes of his country appears to have taken its toll on him as he found it difficult to make an impact. “He is exhausted,” Messi’s father Jorge said, according to the Daily Telegraph. “He feels as if his legs weigh 100 kilos each.”

According to FIFA statistics, however, Messi is only ranked the 30th most hard-working player at the World Cup on the basis of distance covered. He has run a total of 32 miles in the six games he has featured in, having played for 573 minutes. By contrast, the Netherlands’ Wesley Sneijder has covered 43 miles in 585 minutes and tops the list. Messi is also second-from-bottom on the list of players who have played in all six games of the tournament so far.

These mileage stats are common these days (and seemingly flash every time someone is subbed in/out of a game), though they’re not always easy to find or interpret. Fortunately, for the World Cup, FIFA has a page devoted to players’ “distance covered” stats. I’ve compiled those stats, broken down by offense and defense, and sorted by position, like so: 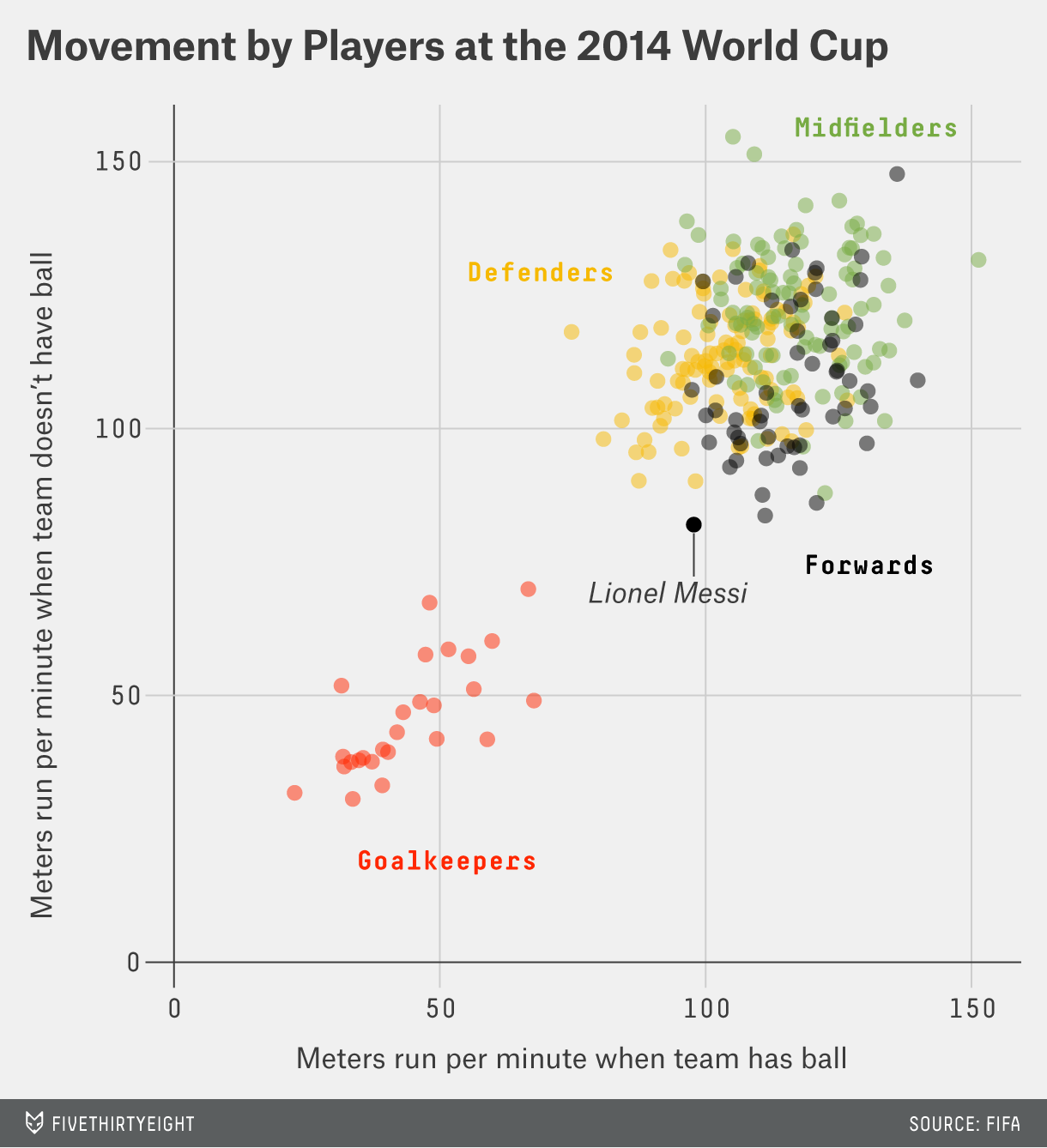 After an article by Ken Early in Slate first turned me on to Messi’s stillness, I couldn’t stop noticing it. When Messi’s not “on the ball,” he’ll often appear to be leisurely strolling through the area he’s in, particularly when the other team is on offense and he has little to do except sit back and wait to see if the ball comes his way. It can seem downright bizarre and contrary to everything a soccer coach teaches about “hustling.”

Could it be that Messi’s inaction had something to do with his “100 kilo” legs? If so, it’d imply that Messi was so tired he was unable to “hustle” as much as normal, taking short breaks on the field when he got the chance to recuperate. This might also help explain his performance “decline” through the tournament.

But I don’t think it’s as simple as that. On the FIFA site, individual game summaries have “tracking” stats as well. Here are Messi’s, broken down by offense and defense: 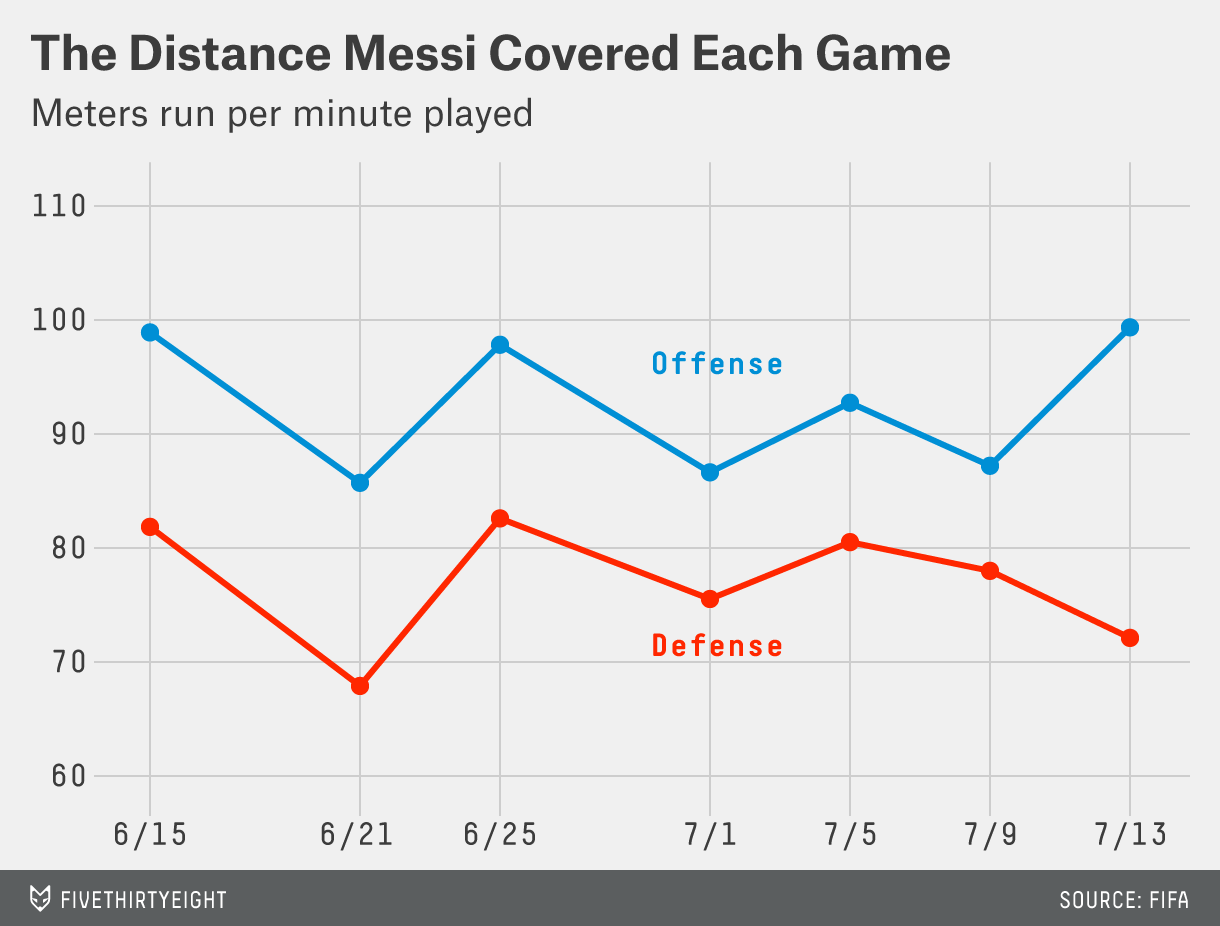 For nearly every game, when Messi runs more on offense, he runs more on defense, and the same is true for when he runs less. To me, that suggests that the variation is probably more systematic and dependent on the matchups Argentina faced. But that large gap in the final game offers an interesting wrinkle. That’s when the difference between offensive work rate and defensive work rate was largest. This is at least consistent with a theory that he was tired for the last game (I assume that would be more likely to be reflected during his defense). But with the defensive work rate as a baseline, it could also indicate that he was running around extra hard on offense trying to make something happen (which he had failed to do for the last couple of games). Or it could just be random variance.

Overall, though, the data doesn’t suggest that Messi wore down as the tournament progressed. If this work-rate phenomenon were a result of his being tired, we might expect to see the highest work rates in games following the longest layoffs, and/or for his work rate to decline as the grueling tournament wears on. But that’s not what the data shows.3

So aside from a blip in the last game, there’s not much evidence that Messi had a general exhaustion problem, but there is evidence that he had a much lower work rate than other players. What to make of that? There are some negative interpretations possible: Messi might not have been fit enough to endure a whole tournament, or he might not have been trying hard enough. But these would only makes sense if low work rates typically indicated a lack of fitness or effort.

And that we can test for.

I don’t have the data necessary to do a complete study of work rates and how they may or may not predict and/or impact quality of play. But for a rough outline, we can at least take a look at FIFA’s data for this World Cup to see whether working harder tends to correspond with playing better. Is there any relationship between a player’s work rate and their offensive production?

The following chart compares a players work rate with their offensive production per minute (using goals plus .1*chances created, a lower variance alternative to goals plus assists):4. 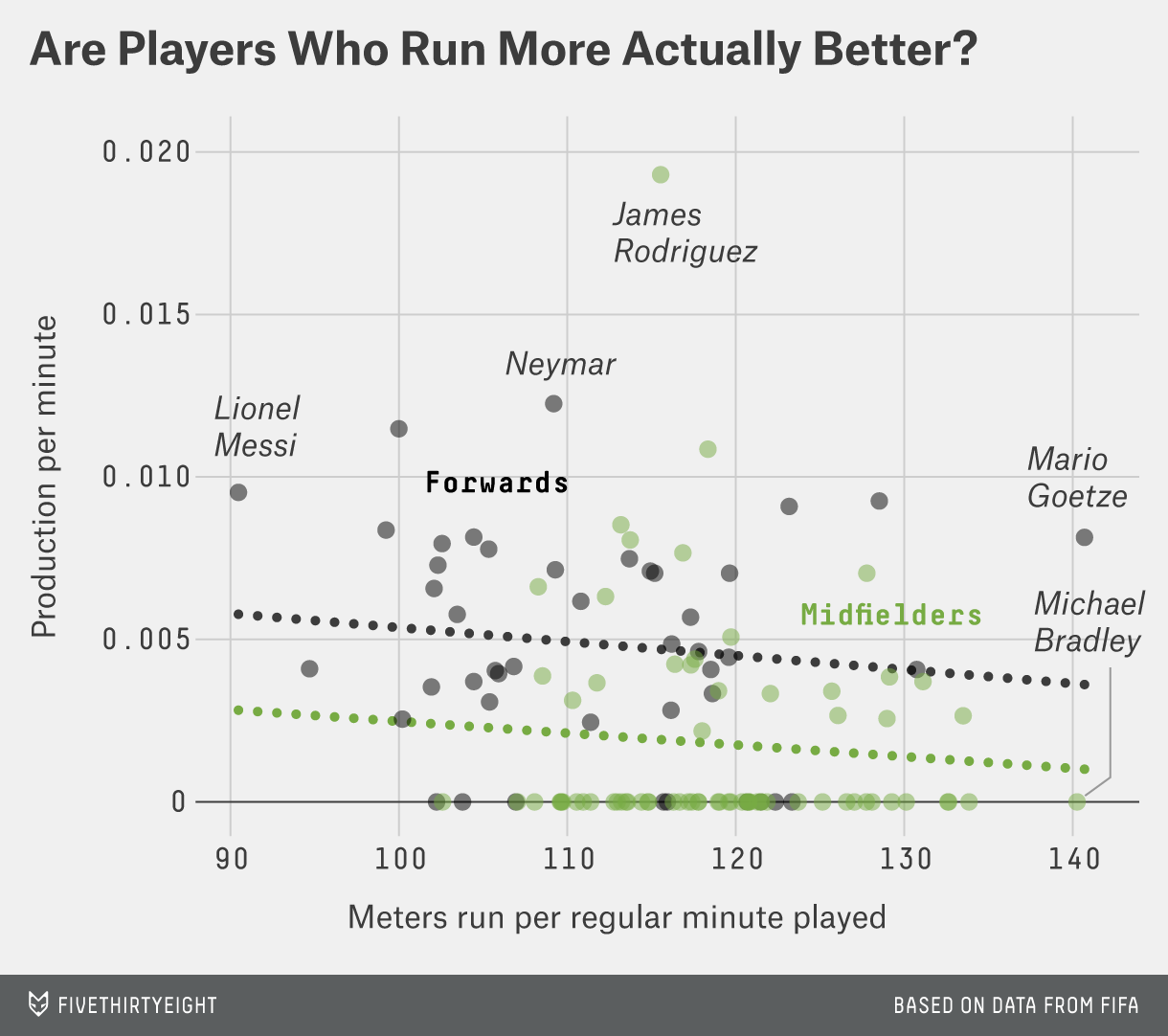 This chart may support the argument that Messi didn’t deserve his Golden Ball, but I’ll stay out of that debate. He certainly didn’t play poorly, as he had the fifth-best per-minute production, despite having the lowest work rate (and it’s not limited to offense, as I’ve noted elsewhere; most aspects of his game were as good or better than normal through most of the tournament).

Meanwhile, on the other end of the spectrum, Mario Goetze had a great tournament (obviously) and the highest work rate. In the middle, we have James Rodriguez, who managed an insane amount of success to go with his moderate effort.

The important thing is that there’s not really any relationship between a player’s work rate and their production, either for forwards or for midfielders. In fact, the trend lines for both groups (covering 119 qualifying players in this tournament) are slightly declining — though not enough to read anything into it.5

So has Messi been as good as he has despite being “lazy,” or perhaps because of it? When Messi was taking the tournament by storm, at least Ken Early was willing to give Messi the benefit of the doubt:

Surely it must mean something that the best player in the fastest-ever era of football hardly ever runs at all.

I don’t have distance-run data for Messi outside of the World Cup, but a little Googling reveals that Messi’s on-field leisure has come up before.

People have cited and/or complained about the amount Messi runs since at least 2010, and it has come up every year since. Note that Messi has been pretty good in that period.

When you see a bunch of super-unusual things about one player, rather than trying to explain them all separately, it’s a good idea to try figure out how they might be related. If Messi’s low work rate was a “feature” rather than a “bug,” it could help him be the dominant player that he is. Here’s a very speculative version of what that argument would look like:

A lot of soccer players run around a lot when there’s not much they can do to improve their situation. They may even continue running after they’re in the ideal location. Or even if they’re making slight improvements, they may be burning energy that would have more value being spent on runs that are higher leverage. Further, not moving unnecessarily may make it easier to keep track of what’s going on in the play, which may help the player anticipate what’s coming next.

OK, that may sound fanciful, but it’s the sort of crazy idea that Messi should make us consider (feel free to propose alternatives!). And it wouldn’t be the only unconventional thing about Messi’s play that probably contributes to his advantage (e.g. his aversion to crossing passes, which until recently were considered an important part of offensive soccer strategy).

This may be key to what makes him as good as he is, or it might not. The bizarre spectacle of Lionel Messi strolling along lazily shouldn’t be used either to hang him or to excuse him. Let’s not let a negative outcome against an all-time-great opponent cloud the mystery.

CORRECTION (July 16, 10:16 a.m.): An earlier version of this article mischaracterized James Rodriguez’s success in the tournament as moderate. That is incorrect. It was insane.