Germany didn’t begin the World Cup as the favorite. That honor belonged to (ahem) Brazil. But that’s a slightly deceptive measure. This was a top-heavy World Cup; not only Brazil but also Germany, Argentina and Spain would have been the front-runners in many past editions of the tournament.

By the end of the World Cup, Germany left little doubt it is the best team in the world. In fact, it may be the best national soccer team ever assembled. 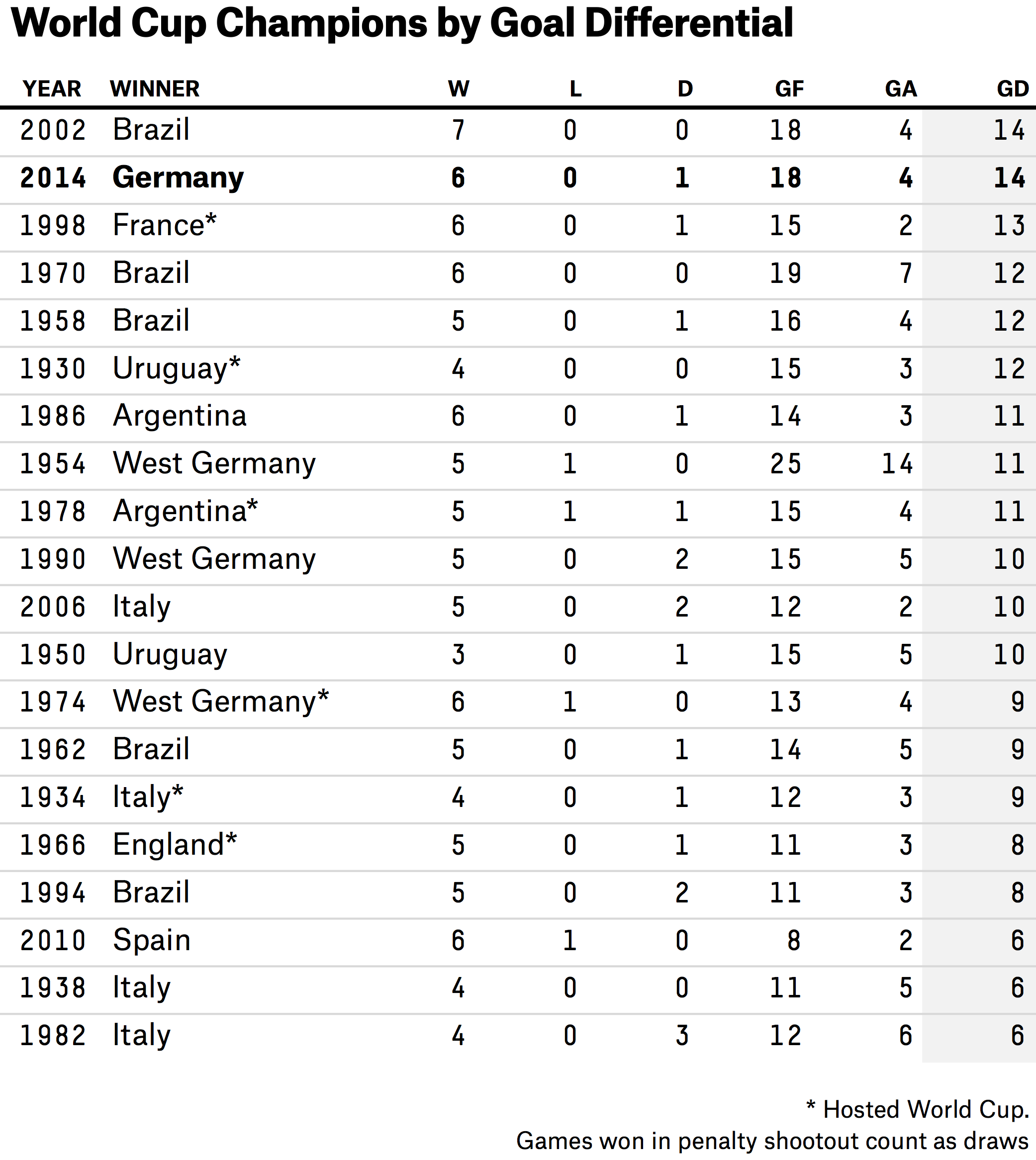 No, the Germans weren’t flawless. They tied Ghana in the group stage and had a little more trouble than they should have with Algeria in the Round of 16. But few World Cup champions are perfect in every match. All but three eventual winners took a draw or loss, or required a penalty shootout, along the way (soccer statisticians usually count games that go to penalties as draws).

And some of these teams were fortunate in other respects. Uruguay only needed to play four matches to win the inaugural World Cup in 1930. Uruguay also had the benefit of playing on home soil. Brazil, in 2002, had a favorable draw — China, Costa Rica and Turkey were in its group.

The Germans, by contrast, did this against some tough competition. They took down Argentina and Brazil in the knockout stage, along with a French team that had been playing as well as anyone.

The World Football Elo Ratings provide one way to account for all these factors: a team’s strength going into the tournament, its dominance during the tournament itself, the quality of its competition, and whether it was aided by playing at home.

Germany’s Elo rating was high to begin with at 2046, which is stronger than a number of World Cup winners. But it gained 150 more points throughout the World Cup (about half of them by beating Brazil 7-1), finishing with a rating of 2196. 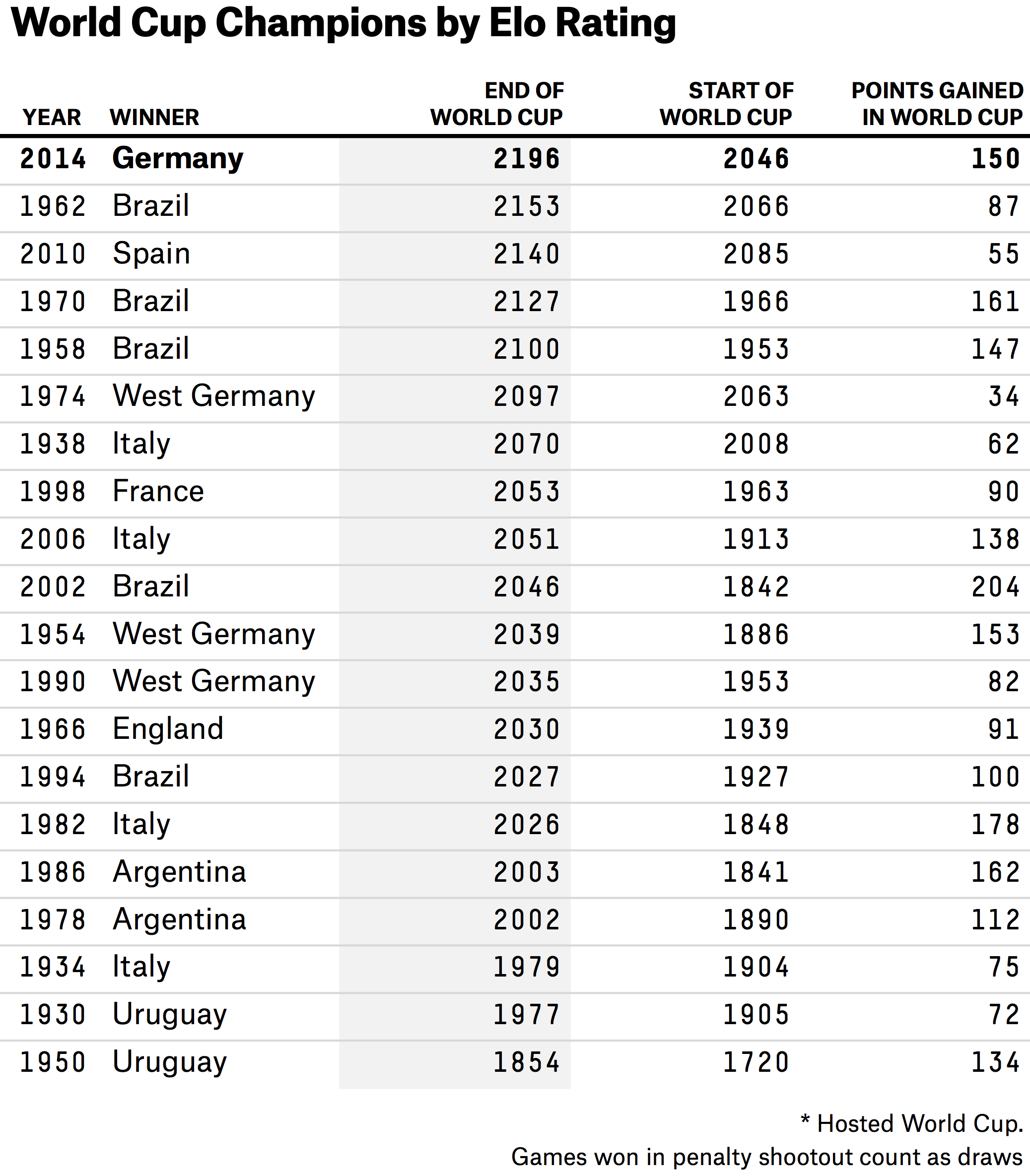 This is the highest Elo rating ever for a World Cup champion. The 1962 Brazil team previously held the top spot.

In fact, it’s the highest a national soccer team has ever been rated in the Elo system. Before Germany, the highest-rated team of all time had been Hungary in 1954. Hungary’s rating peaked at 2166 after winning the World Cup semifinal, but then it lost to West Germany in the tournament’s final match.

I’ll be curious to see how this year’s German team is regarded in barroom arguments around the world, both now and with the benefit of hindsight. It doesn’t have a transcendent superstar, although it has a number of players who might rank in the top 20 or 25 in the world. It’s often said that the Germans didn’t have a distinctive style — although their relentless attacking play represents the new paradigm in world football, and it led to the highest-scoring and perhaps most exciting World Cup in many years.

Other teams — notably Spain from 2008 to 2012, and Brazil under Pele — had longer sustained stretches at the apex of world football. But Germany is young and deep. Mario Götze, who scored the winning goal in the final Sunday, is 22. Thomas Müller and Toni Kroos are 24, and Mesut Özil is 25. The Germans have a good chance to go in as the favorites in the 2018 World Cup in Russia.

Still, the competition is going to be tough. At the start of the next tournament, Brazil’s Neymar and Colombia’s James Rodríguez will be just 26, and Lionel Messi — despite playing in his fourth World Cup — only 30. France is perhaps a player away from competing with the world’s best teams, and after having won FIFA’s Under-20 World Cup last year, it could make that transition soon. This is a great era for the international game, and that makes what Germany accomplished all the more impressive.