The seventh installment of “The Fast and the Furious” franchise, “Furious 7,” is out Friday, and nobody has been more instrumental to the series’ success than Vin Diesel — it mainly exists in its present form because Diesel wanted to make niche science-fiction films and agreed to go along with the car movies as leverage.

You could make an argument that Paul Walker, who starred in six of the films, was a big part of the draw. But after Walker’s death, “Fast” depends more on Diesel than ever.

The franchise makes more money with Diesel than without him. He starred in the first, fourth, fifth and sixth (and now seventh) films. Walker anchored the second film,”2 Fast 2 Furious.” The third, “The Fast and the Furious: Tokyo Drift,” had an almost entirely new cast (Diesel made a brief cameo).

When Diesel stars, the movies do really well. Here are box office numbers for the franchise from OpusData: 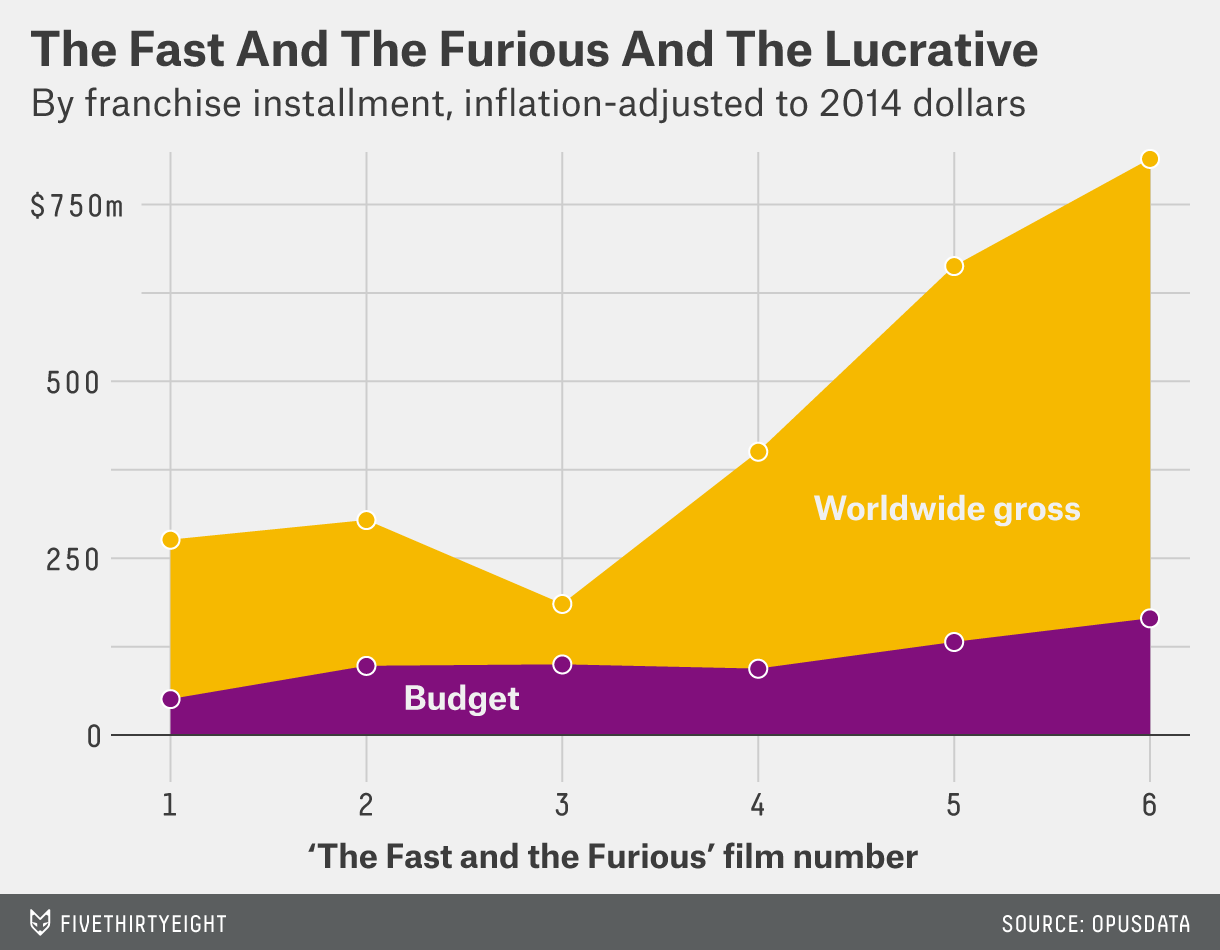 A few things stand out. “Tokyo Drift,” which didn’t star Diesel or Walker, is probably the only film in the franchise that lost money (according to a back-of-the-napkin formula used to calculate a film’s net loss). And since Diesel’s triumphant return in “Fast & Furious,” the fourth film, these movies keep on making more and more money (that chart would be even more drastic if I hadn’t adjusted for inflation). Even more importantly — and to see this, you have to go a step deeper than the top-line numbers — these films do great internationally. 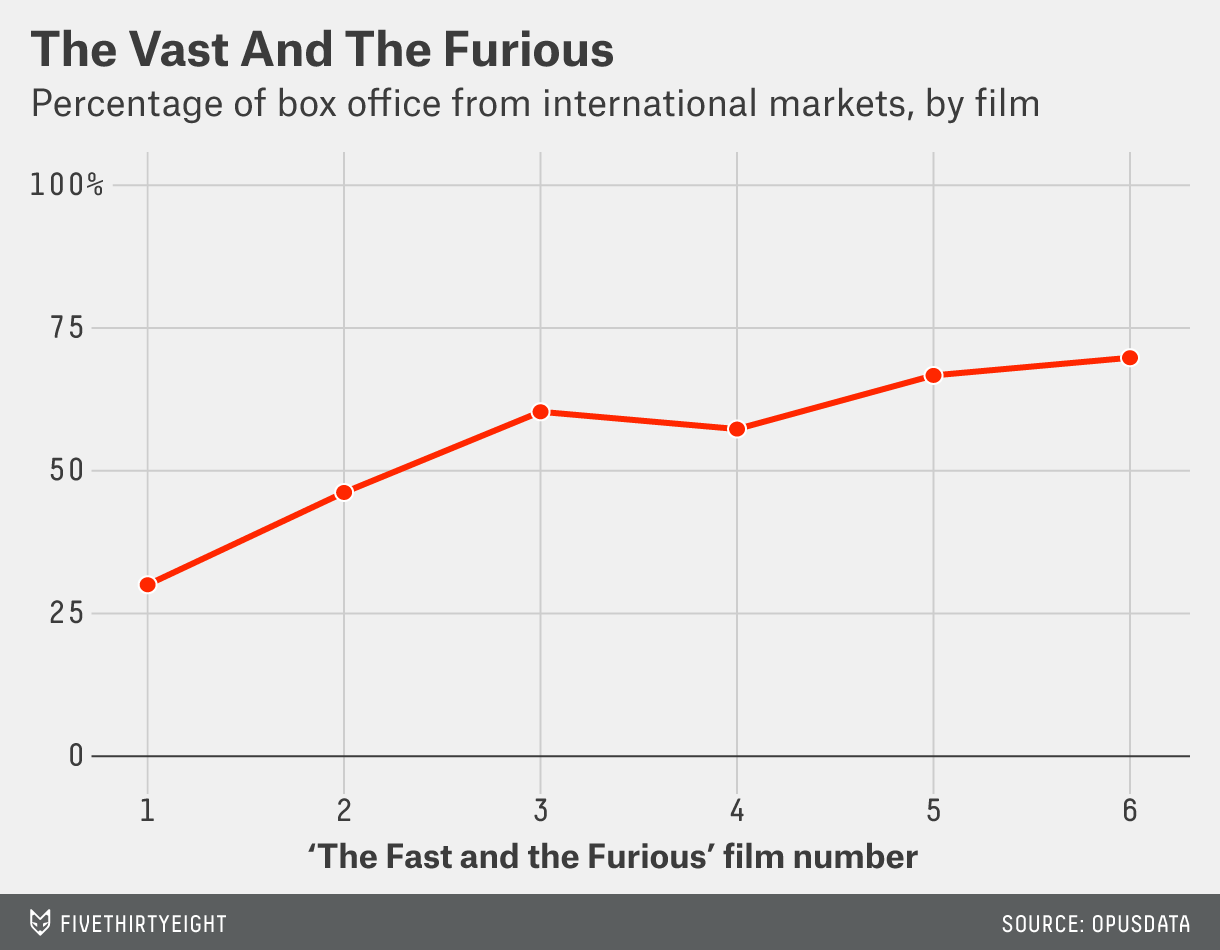 Diversification of revenue is crucial for any franchise — attendance at the theater is declining domestically, and unless films have a broad appeal all around the world, they’re increasingly disadvantaged. (For some perspective, see my earlier analysis of Will Ferrell’s movies. His frat pack comedies draw, at best, 30 percent of their box office gross from international sources.)

The best part is that Diesel almost single-handedly kept the series from the direct-to-video bin, volunteering that crucial cameo in the third film in exchange for the rights to his passion project, the space opera Riddick series. The director of that series, David Twohy, explained Diesel’s maneuvering to The Huffington Post in 2013:

After “Chronicles,” they said, “We are out of the Riddick business. It’s just a straight business calculation of us. You spent too much money and you didn’t make enough back. So, no, we’re not going to do anymore.” Vin, being the savvy guy he is, said, “Well, give me the rights back.” And they didn’t want to do that … I think this was about the time that “Fast 3” had already shot and they were testing it. Maybe it wasn’t testing as well as it should have and they decide, “Maybe we need a cameo from Vin” — because he wasn’t in that movie. So, I do believe that in his savviness, Vin said, “Don’t pay me for that cameo. Just give me the rights back.”

After that, Diesel was able to make the third Riddick movie and then assume control of the “Fast” franchise.

“Fast” is huge for Universal — the studio has been left out of the superhero craze, but its competitors all have some skin in the spandex-and-cape game. Sony has Spider-Man; Warner Bros. owns DC Comics; Fox has the X-Men; and Disney, which owns FiveThirtyEight, has the Avengers. If it weren’t for — and I mean this in the best way — Vin Diesel being a gigantic nerd, Universal wouldn’t have a major, internationally anchored franchise.