Less than half an hour after a 7.8-magnitude earthquake struck Nepal on Saturday, the U.S. Geological Survey issued its estimates of the human toll and the economic cost. There was a 19 percent chance that at least 1,000 people had died and a 10 percent chance the quake caused more than $1 billion in damage.

Then, the numbers got worse. Much worse. Less than an hour after the quake, the chance of at least 1,000 people losing their lives had risen to 42 percent, and the probability of at least $1 billion in damage had risen to 36 percent.

Meanwhile, seismologists were getting more information. They were starting to estimate the dimension of the fault, revising the magnitude and collecting reports of the intensity of shaking caused by the quake. By about 90 minutes after the quake, the USGS had issued its first online, public forecast, going beyond an email list of emergency responders and others. And it kept revising its estimates. The outlook for Nepal got even worse. In its most recent estimate, issued 15 hours and 36 minutes after the quake, the USGS reported a 52 percent chance of at least 10,000 deaths and a 76 percent chance of at least $1 billion in losses. 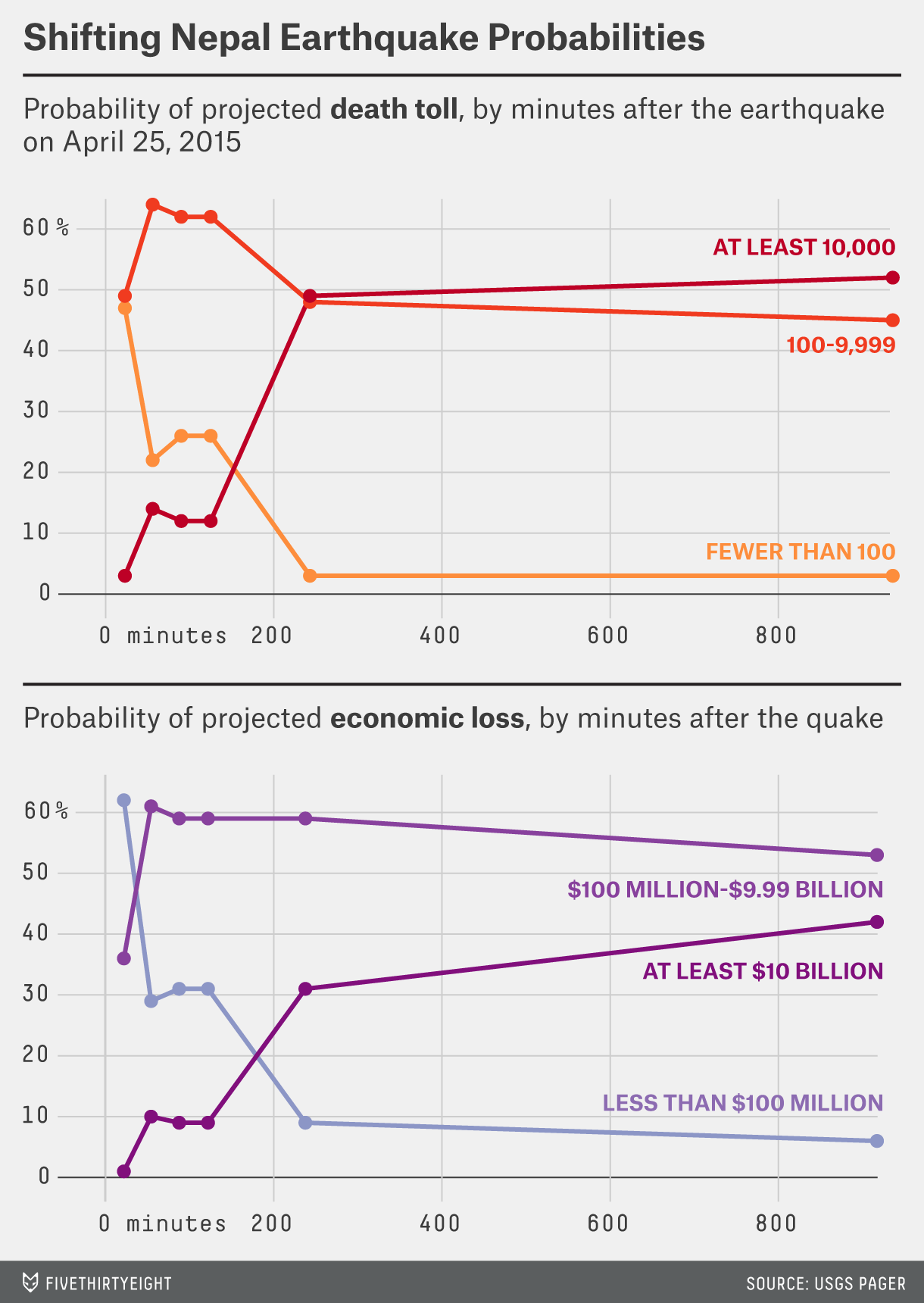 These are merely rough estimates, more rough than estimates. They come with enormous uncertainty. The USGS’s latest Prompt Assessment of Global Earthquakes for Response, or PAGER, estimate shows a 17 percent chance that fewer than 1,000 people died — although 3,800 people have already been reported dead.

The PAGER system trades precision for speed. It quickly alerts people around the world of the order of magnitude of an earthquake in terms of its effect on people and property, as opposed to its physical magnitude. Its numbers aren’t based on the reported death toll or assessments of building damage. Instead, they’re the outputs of a model that takes into account the physical characteristics of an earthquake, the number of people and types of buildings affected, and the outcome of prior tremors.

PAGER’s track record shows that it is well-calibrated but can be far off for any individual forecast — hence the wide range of possible outcomes it projects.

It’s too soon to say whether PAGER overestimated the number of deaths in Nepal or whether many people who have died have not yet been counted. USGS geophysicist David Wald, who works on the PAGER system, said in an email that both could be true. “Outlying areas are not accounted for so losses will undoubtedly rise,” he said. However, fewer people died in Kathmandu than estimated. That could be because buildings shook less in the capital than expected for an earthquake of this size or because the shaking killed fewer people than expected. More shaking measurements could help USGS refine its Nepal estimates — and improve its speedy, uncertain projections for future major quakes.