“Could” is the key word in that statement. Calculating economic loss from earthquakes is a lengthy and unpredictable process. Acknowledging that uncertainty, the United States Geological Survey (USGS) reports a wide range of estimated economic losses, as it does after every earthquake. According to the latest version of its alert, issued Tuesday morning, the USGS says there is a 3-in-5 chance that losses will top $1 billion and a 1-in-4 chance that losses will top $10 billion. Then again, there’s a 1-in-8 chance losses will come in under $100 million.

The USGS is more confident in its forecast that no one was killed by the Napa earthquake, thanks in part to Northern California’s earthquake-resistant construction standards. The agency says there’s a 3-in-4 chance that no one died, and there almost certainly were fewer than 10 fatalities. (The USGS doesn’t forecast injuries.)

These estimates aren’t based on what the USGS calls “ground truth”: assessing damage to buildings and infrastructure and calculating costs. Instead they’re outputs from a model based on earthquake magnitude, seismic activity, shaking intensity, the population and building stock in the area, the damage from past earthquakes and other factors.

The USGS’s forecasts trade precision for statistical realism and speed. The first Napa assessment from the agency’s Prompt Assessment of Global Earthquakes for Response (PAGER) system came out 13 minutes after the quake, according to Kristin Marano, a geophysicist who works on the PAGER Project in Golden, Colorado.

The current estimate for the Napa quake is the 25th one issued in the past two-and-a-half days. Loss estimates have changed substantially four times, data provided by Marano shows. According to the first estimate, there was a 55 percent chance the loss would total less than $100 million and just a 14 percent chance of a loss over $1 billion. About a half-hour later, the probability of a loss under $100 million dropped by half, and the probability of a loss greater than $1 billion more than doubled, to 37 percent. It rose further, to 56 percent, by six hours after the quake. Then it fell to below 50 percent the day after the quake, before settling at its current level of 61 percent — with just a 2 percent chance of a loss under $10 million, one-tenth the level in the first alert.

The shift upward in the economic-loss estimates is even more dramatic than the probability percentages suggest. That’s because of the exponential growth between categories. Even if we assume the probability the loss falls into each category is the probability it’s at the low end of the range, an increase of 1 percentage point in the chance of losses of $100 billion or more — and corresponding decrease in the chance of losses under $1 million — increases the expected loss by $1 billion. Using that same conservative assumption, the expected loss has multiplied by 23 times from the first estimate to the current estimate of about $8.3 billion.

These updates reflect that not every earthquake-sensor station transmits its readings of seismic data via cell networks or wireless Internet — either because they’re not equipped to do so, or because the quake disrupted transmission. At these stations, “someone has to go out and actually pull out a data card,” Marano said. When it comes in, the new data gets fed into the model, which produces updated estimates.

The fatality forecast has stayed stable through these updates. It also so far has proven correct, with no deaths but three or six people critically injured, depending on the report.

Roughly 500 subscribers, many of them first responders from state and federal U.S. agencies, and from other countries with earthquake risks, get emails with the alerts. And the speed of the system means it often beats news reports by a few hours, giving responders a head start, according to the USGS.

Its accuracy is harder to measure. In a paper for the Second European Conference on Earthquake Engineering and Seismology in Istanbul this week, Marano and six co-authors assessed PAGER forecasts for more than 2,500 events between 2010 and 2013. Most of the events were expected to kill no one and killed no one. For the rest, researchers compared USGS fatality forecasts with numbers from a USGS database and news reports. They found the forecasts usually were well calibrated: For example, most yellow earthquakes, expected to kill between one and 99 people, did in fact do so. But the system tended to underestimate the toll of earthquakes in parts of China and to overestimate death counts in southern Iran.

Here are two charts from the paper, which Marano provided and which were not online as of Wednesday afternoon: 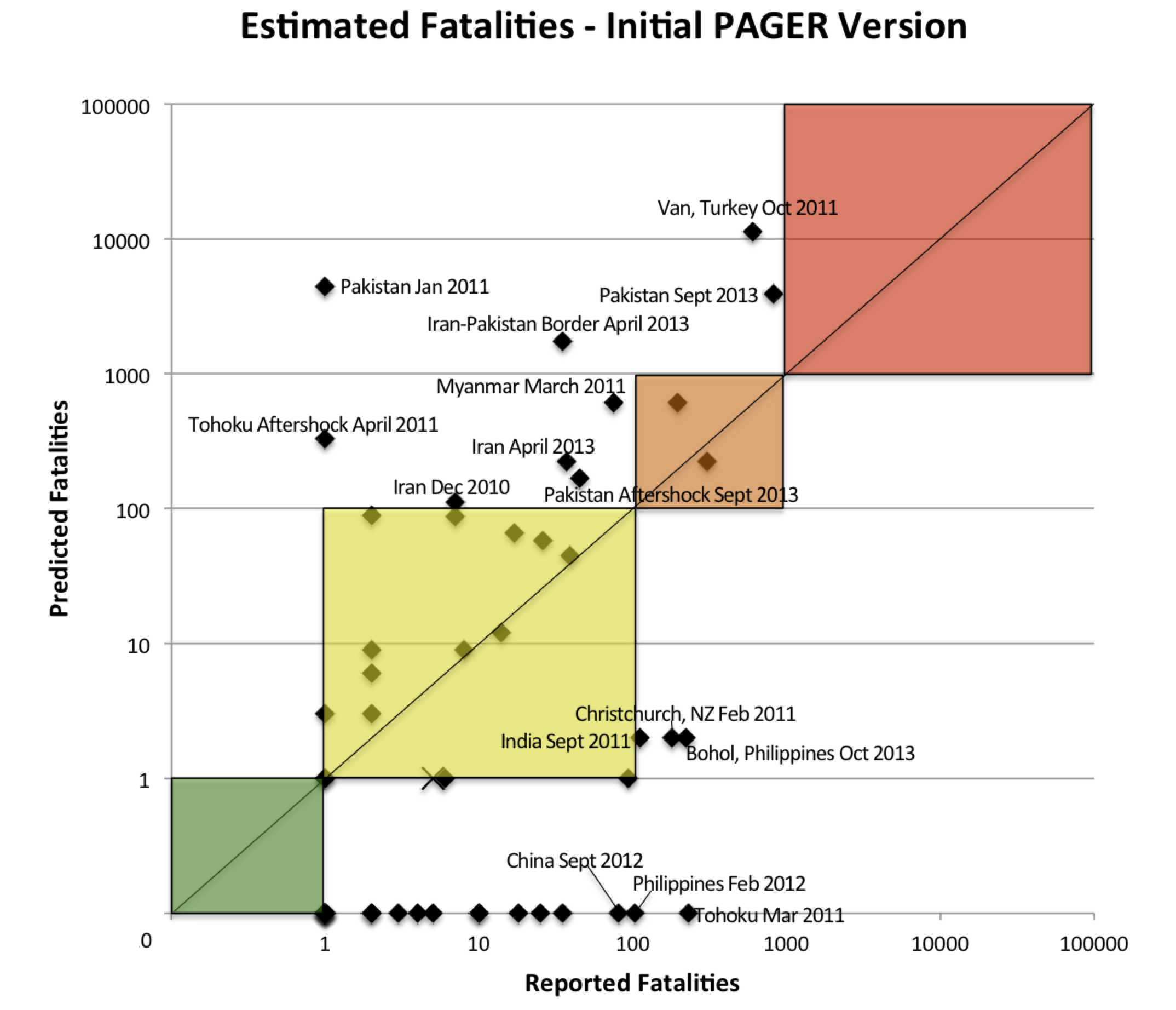 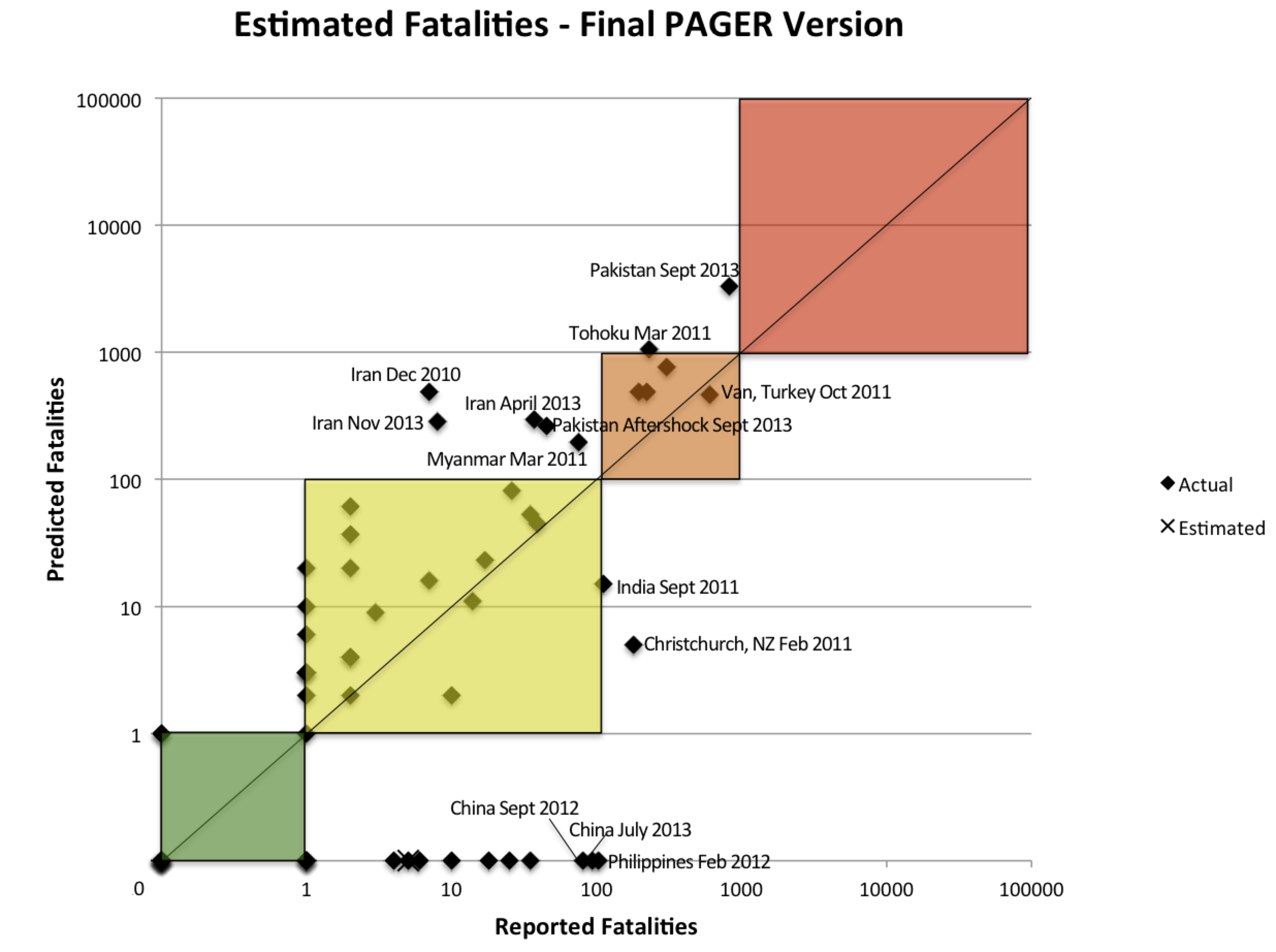 The authors had no good way to assess their economic-loss estimates. “Economic-loss data is very scarce and thus my comparison of actual vs. recorded would only have seven data points, and many of the ‘actual’ losses in my sources are estimates as well,” Marano said in an email. That’s much tougher than evaluating, say, election pollsters by comparing their survey results with vote counts.