The 2015 FIFA Women’s World Cup Draw that concluded Saturday was the first ever to feature 24 teams; previous World Cups had only 16. Eight countries will make their debut, possibly paving the way for new talent to make a splash, and four champions will return stronger and more experienced. Here’s how the draw shook out, followed by our initial reactions to each group: 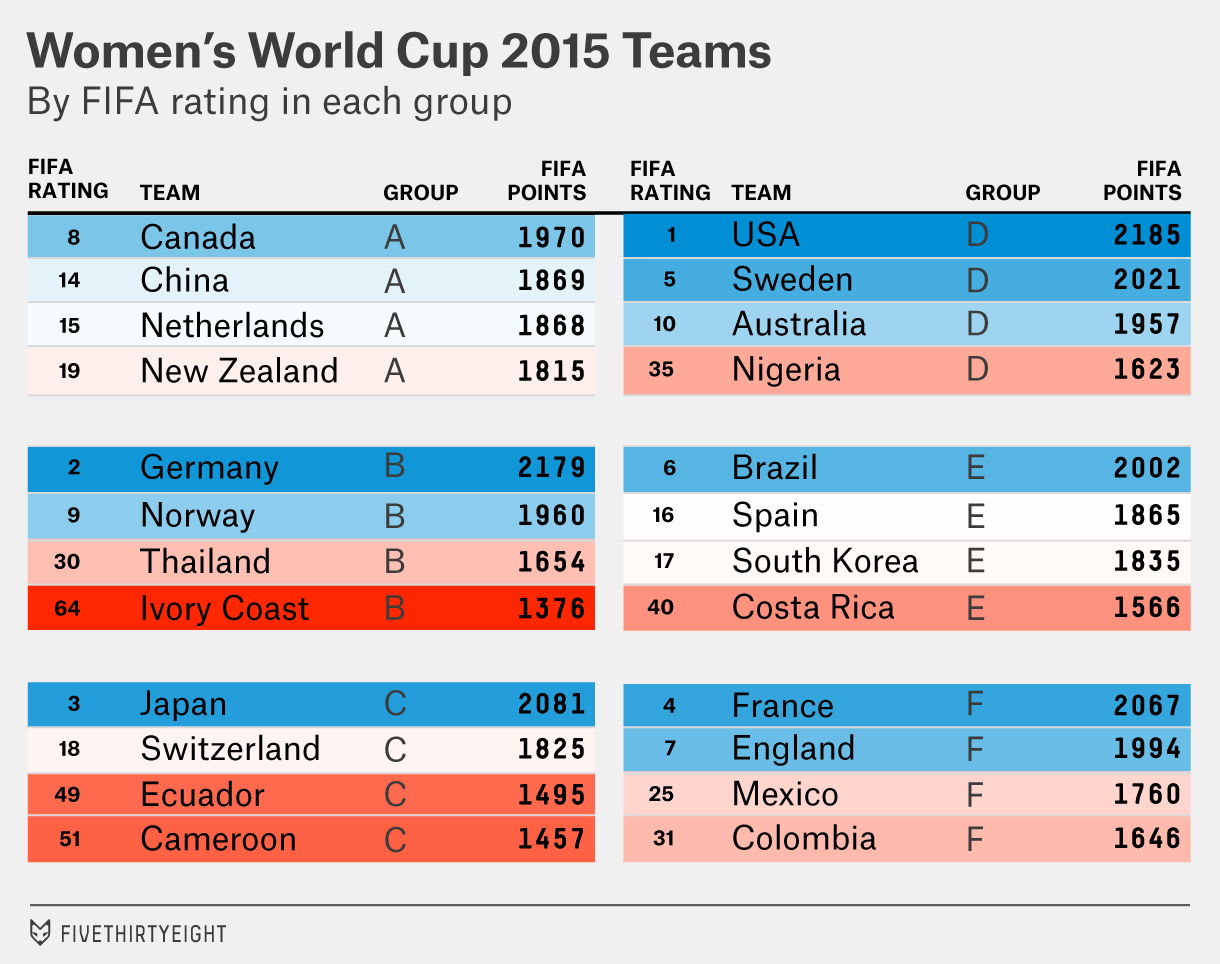 Group A: Canada, China, Netherlands, New Zealand
Group A has the second-highest combined FIFA points score, 7522, and is likely to be exceptionally difficult to advance from. It’s led by host nation Canada (currently ranked eighth), and even the lowest-ranked team in the group, New Zealand, has an aggressive style of play that’s proved to be tough for Brazil and other strong squads. The young, technical Chinese team features standout forward Yang Li (nicknamed “Young Sun Wen,” after China’s all-time leading scorer), and the 15th-ranked Netherlands is making its World Cup debut after beating the higher-ranked Italy to qualify.

Group B: Germany, Norway, Thailand, Ivory Coast
Second-ranked Germany leads Group B. The Germans, having won back-to-back World Cups in 2003 and 2007, are regimented and unaccustomed to losing, as well as notorious for playing their best soccer at the World Cup. Norway clinched a World Cup title in 1995 but has yet to do it again. The Norweigans’ style of play is very direct (meaning they don’t focus on possession), but look for Olympique Lyon standout Ada Hegerberg to hold the ball up top. The Europeans should cruise through to the next stage — Thailand and Ivory Coast are relatively inexperienced and making their first World Cup appearances.

Group C: Japan, Switzerland, Ecuador, Cameroon
Similar to Group B, Group C features two top-ranked teams and two much weaker opponents — Cameroon and Ecuador — with Ecuador barely qualifying by beating Trinidad and Tobago 1-0 last week. The 2011 champions, Japan, are currently ranked third and play a highly technical style of soccer; the crafty midfielder Aya Miyama allows Japan to connect beautifully between the back and front lines. Switzerland is an exciting addition to the World Cup — the newcomers can compete against the strongest European teams. Swiss Ramona Bachmann has been likened to Marta and is nominated for the 2014 player of the year in Sweden’s Damallsvenskan, one of the top women’s leagues in the world.

Group D: USA, Australia, Sweden, Nigeria
This group is being called the Group of Death — it has the highest total of combined FIFA points, 7786, and includes three teams in the top 10 FIFA rankings. The No. 1-ranked U.S. will again face Sweden in group play; the Swedes defeated the Americans 2-1 in the 2011 World Cup, and this time Sweden will be led by former U.S. coach Pia Sundhage. Australia is an athletic team that could give the U.S. and Sweden tough games, especially with explosive forward Lisa De Vanna leading the offense. And Nigeria should not be overlooked. Its young, talented team includes Asisat Oshoala, the winner of the 2014 FIFA U-20 Women’s World Cup Adidas Golden Ball.

Group E: Brazil, South Korea, Spain, Costa Rica
Sixth-ranked Brazil hasn’t looked as strong as it once did, losing 2-0 to France last month in a friendly, but it’s the strongest team in the rather weak Group E. First-timers Spain are led by forward Vero Boquete, a 2014 FIFA women’s player of the year nominee, and could match up well against Brazil — both teams are creative and patient. And South Korea is technical and organized, which could cause problems for the often disorganized Brazilians. But don’t count out Costa Rica, which placed second in the CONCACAF qualifiers (but was handedly defeated by the U.S. in the final). Some of its players, including Shirley Cruz Traña (who plays for the French club Paris Saint-Germain), have moments of brilliance.

Group F: France, England, Mexico, Colombia
Foes France and England will face off in Group F, the third-strongest group based on combined FIFA points. France is a not-so-dark horse for 2015; it’s technical, physical and fast, and its players alternate between direct and possession-style play almost seamlessly. Élodie Thomis, Louisa Nécib and Eugénie Le Sommer are some of the top women’s players in the world. Meanwhile, the seventh-ranked England will be looking for retribution — France knocked out England in the 2011 World Cup quarterfinals. CONCACAF and CONMEBOL teams Mexico and Colombia will be hoping for a point against England and France, but lately Mexico has looked unfit and disorganized from the team that beat the U.S. in 2010.