Just two minutes into the CONCACAF Women’s World Cup Qualifiers semifinal game in 2010, a free-kick from distance was flicked behind the U.S. back line, and a Mexican player running forward slotted it into the net. The U.S. looked stunned. Mexico scored again in the 27th minute and would go on to defeat the U.S. 2-1 — the only time it has managed to do so in the two teams’ 31 matchups — nearly eliminating one of the world’s best teams from the 2011 Women’s World Cup. (The U.S. was forced to play a two-games series against Italy to qualify for the World Cup, where it eventually finished second to Japan on penalty kicks.)

On Friday night, the two teams will meet again in the CONCACAF Qualifiers semifinal, this time on U.S. soil. Despite handedly beating Mexico in two friendlies last month, 8-0 and 4-0, that 2010 semifinal game serves as a reminder for the U.S.: World Cup hopes can fade in a flash — even for a powerhouse team — with one bad game.

We’ve updated our projections, and the U.S. now has a 95 percent chance of beating Mexico and advancing to the finals. That number makes it seem like Friday’s matchup will be lopsided, and it may be. But if Mexico sits in and defends as anticipated, the Americans may find it difficult to score and could be forced into overtime or penalty-kicks.

Mexico, however, has not looked as strong at this year’s CONCACAF Qualifiers compared to 2010’s, losing to Costa Rica in group play 1-0. It has only a 4 percent chance of winning the tournament, but a 74 percent chance of placing third — enough to qualify for next summer’s World Cup.

Below are the updated expected-win probabilities for the remaining CONCACAF tournament teams: 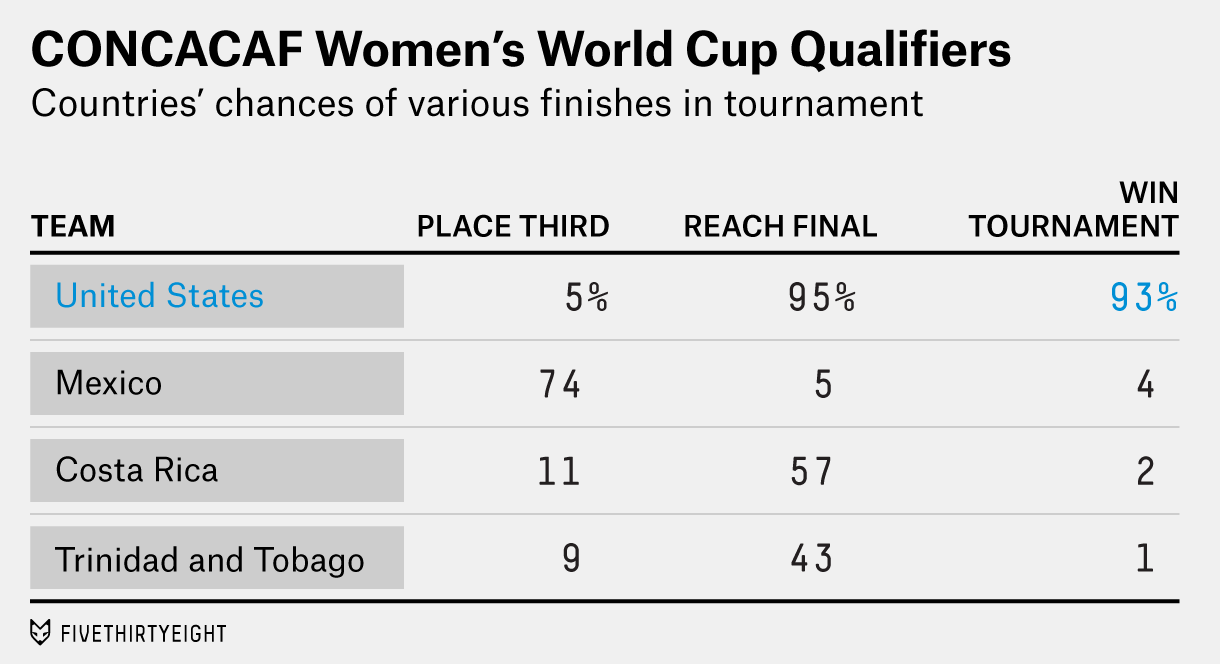 The other semifinal matchup Friday night, between Costa Rica and Trinidad and Tobago, is evenly matched. Costa Rica is a slight favorite, with a 57 percent chance of beating Trinidad and facing the Americans in the final. The two teams have drawn two out of their five matchups. Costa Rica has beaten Trinidad twice, and Trinidad has beaten Costa Rica once. The last time they met, however, in December 2012, Trinidad crushed Costa Rica 4-0 (how seriously the teams took this game is unclear though, as it wasn’t recorded as an official qualifying or friendly match).

The winners of the two semifinal games will play in the championship Sunday, with their World Cup berths already secured. The more interesting match may be the third-place game (also Sunday), when the winner will secure the last reserved CONCACAF spot at the World Cup. The fourth-place team, however, is not automatically eliminated and will play Ecuador in a two-game series for another World Cup berth.