Monday and Tuesday mark the end of group play in the 2014 CONCACAF Women’s World Cup Qualifiers, with the top two teams from each group advancing to the knockout rounds this weekend — all vying for three spots (possibly four) at next summer’s World Cup. After the first two games, we calculated the expected wins and advancement chances for each team in the tournament, but the standings have changed since last week’s opening matches.

After a slow start against Trinidad and Tobago, a more organized U.S. team routed Guatemala 5-0 in its second game, with four of its five goals coming late in the second half. The addition of Tobin Heath up top in the 4-3-3 formation proved lucrative, with Heath tallying two goals — including this sweet little flick into the back of the net:

Even though the U.S.’s chances of winning the tournament nominally decreased, from 95.5 percent to 95.1 percent, the No.1-ranked FIFA team in the world is still heavily, heavily favored to win. The U.S. is also a heavy favorite against Haiti on Monday night. Haiti, meanwhile, has only an 8 percent chance of making it to the knockout rounds after losing to a 10-player Trinidad team on Friday.

The more interesting matchup on Monday night is Trinidad vs. Guatemala. Trinidad, the tournament’s underfunded Cinderella, currently has an 84 percent chance of advancing to the knockout rounds. If Trinidad wins or ties against Guatemala and Haiti loses to the U.S., the Trinidadians will likely face Costa Rica in the semifinals (where even a loss would leave fourth-place Trinidad with a shot at attending its first World Cup).

Below are the updated expected group points and win probabilities for every CONCACAF tournament team: 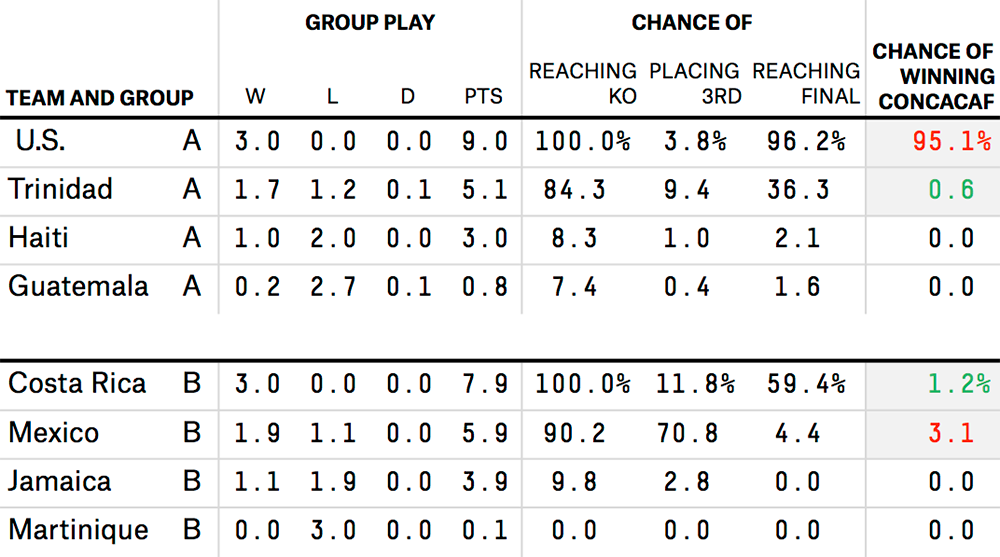 Costa Rica’s upset over Mexico last week moves it to the top of Group B, despite Mexico still having a greater chance of winning the tournament — 3.1 percent compared to Costa Rica’s 1.2 percent. This is a function of the FIFA ratings (which we’re using to calculate the expected wins and advancement probabilities, and which have not been updated to reflect Costa Rica’s recent performances). FIFA currently ranks Mexico at No. 25 and Costa Rica at No. 40. Both Costa Rica and Mexico are locks for the knockout round, but Mexico’s higher rating and record against the U.S. (they’ve beaten the U.S. once and tied them once, while Costa Rica has never won against the Americans) are part of why the Mexican team has a marginally better chance of upsetting the U.S. and winning the tournament.

Costa Rica will face last-place Martinique and Mexico will play against Jamaica on Tuesday in the final Group B matches. As the tournament currently stands, the most likely knockout scenarios are the U.S. vs. Mexico in one semifinal and Costa Rica vs. Trinidad in the other. The semifinal matches will be played on Friday and the championship on Sunday, and we’ll update the advancement table again before those games.

CORRECTION (Oct. 24, 4:37 p.m.): A previous version of this post included a table with an incorrect column header. The table lists the chances of placing third, not reaching the third-place game.