When Michelle Wilson lost her job at a Baltimore logistics company in July, unemployment benefits provided her with a vital lifeline. At $430 a week, the payments didn’t come close to replacing her $47,000 annual salary. But they did allow her to pay rent and utilities and make her monthly car payments while she looked for another job.

Last week, however, Wilson’s lifeline disappeared. Six months after she lost her job, her benefits ran out. Now she’s dodging bill collectors’ phone calls and trying to figure out how to hold on to the car that she needs to get to job interviews. Despite all the signs of an improving economy — more hiring, more job postings, a falling unemployment rate — Wilson, 48, said she’s seen few signs that her own prospects are getting better.

“You go online, you see all these jobs that are posted, but then when you apply for them, you never hear anything back,” said Wilson, who has a bachelor’s degree. “You have people who are executives, people who were professionals losing their jobs. … These people are not lazy. They just can’t find the work.”

Stories like Wilson’s used to be rare, especially outside of recessions, but not anymore. Nearly 3 million Americans have been out of work for more than six months, the traditional definition of long-term unemployment. That’s down from a peak of 6.8 million in 2010, but as a share of total joblessness, long-term unemployment remains higher today than at the peak of any previous recession. Moreover, the problem appears to be at least partially structural: The amount of time the typical person remains out of work has been trending upward for decades. 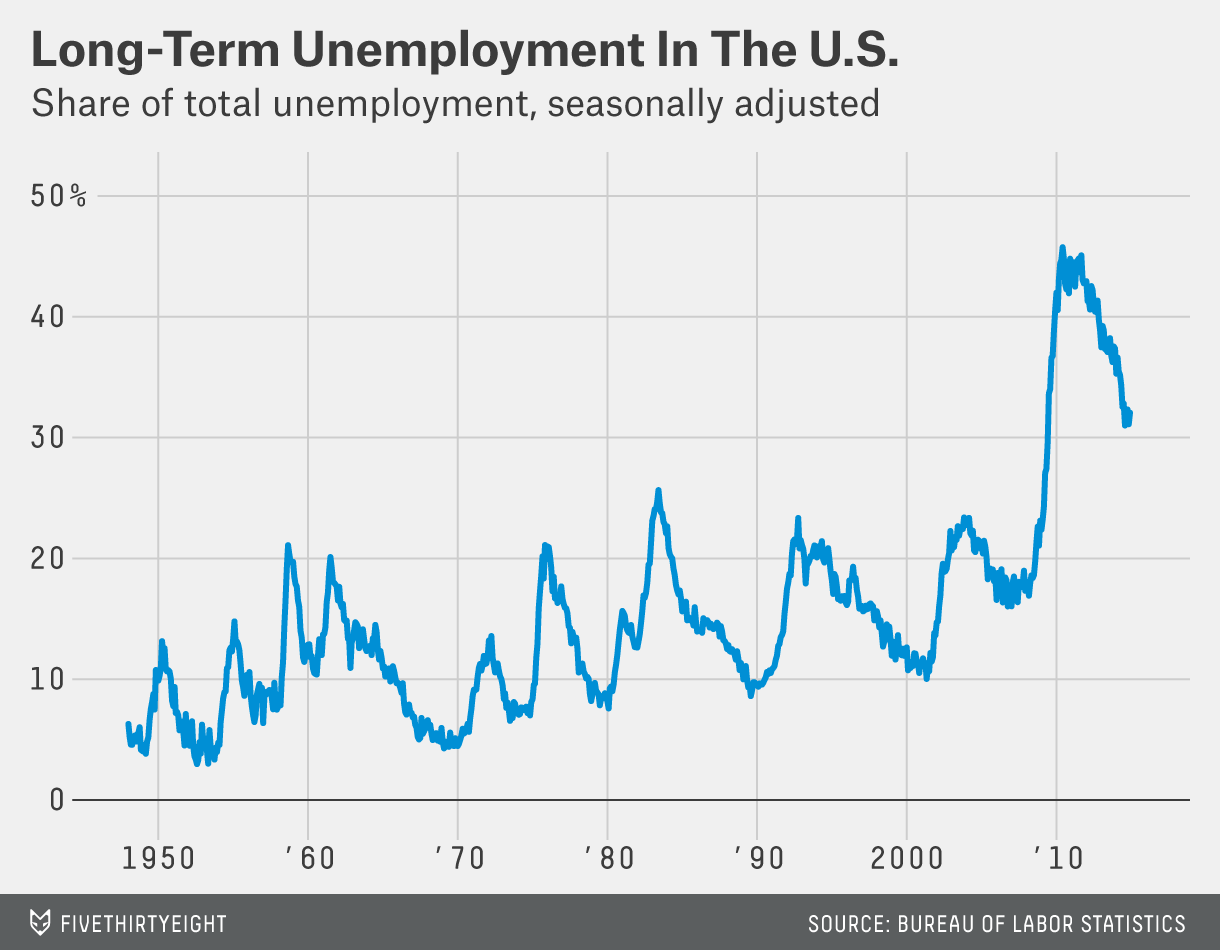 On Monday, as part of his new budget, President Obama laid out a series of proposals aimed at adapting the unemployment system to this new reality. He wants to offer states incentives to provide at least six months of benefits; expand eligibility to workers who don’t qualify for the program; and create a permanent, tiered system of emergency benefits that would take effect during periods of high unemployment. In an interview, Secretary of Labor Tom Perez said it makes sense to change the system now, while the economy is improving, rather than to wait until the next recession.

“Now is a perfect time, when you’re not confronting the hurricane of unemployment,” said Perez, who called long-term unemployment “one of the enduring legacies of the Great Recession.”

Elements of Obama’s proposal have their roots in a bill proposed last year by Republican Sen. John Thune of South Dakota. But despite such nods to bipartisanship, most of Obama’s recommendations have little chance of becoming law. He would pay for expanded benefits through higher taxes on employers, something that stands virtually no chance of passing the Republican-controlled Congress.

But even if they were to pass, Obama’s proposals represent, for the most part, incremental change. Many critics of the system on both the left and the right argue it needs a much more fundamental overhaul to keep up with vast shifts in the nature of both employment and unemployment.

Just how far out of step the unemployment insurance system has fallen with the unemployment reality is made clear in a new report from the National Employment Law Project (NELP), a liberal advocacy group. Only 27 percent of unemployed workers received jobless benefits in 2014, the lowest share on record. Low-income workers are particularly unlikely to receive benefits despite being much less likely to have other resources to rely on while they look for a job. 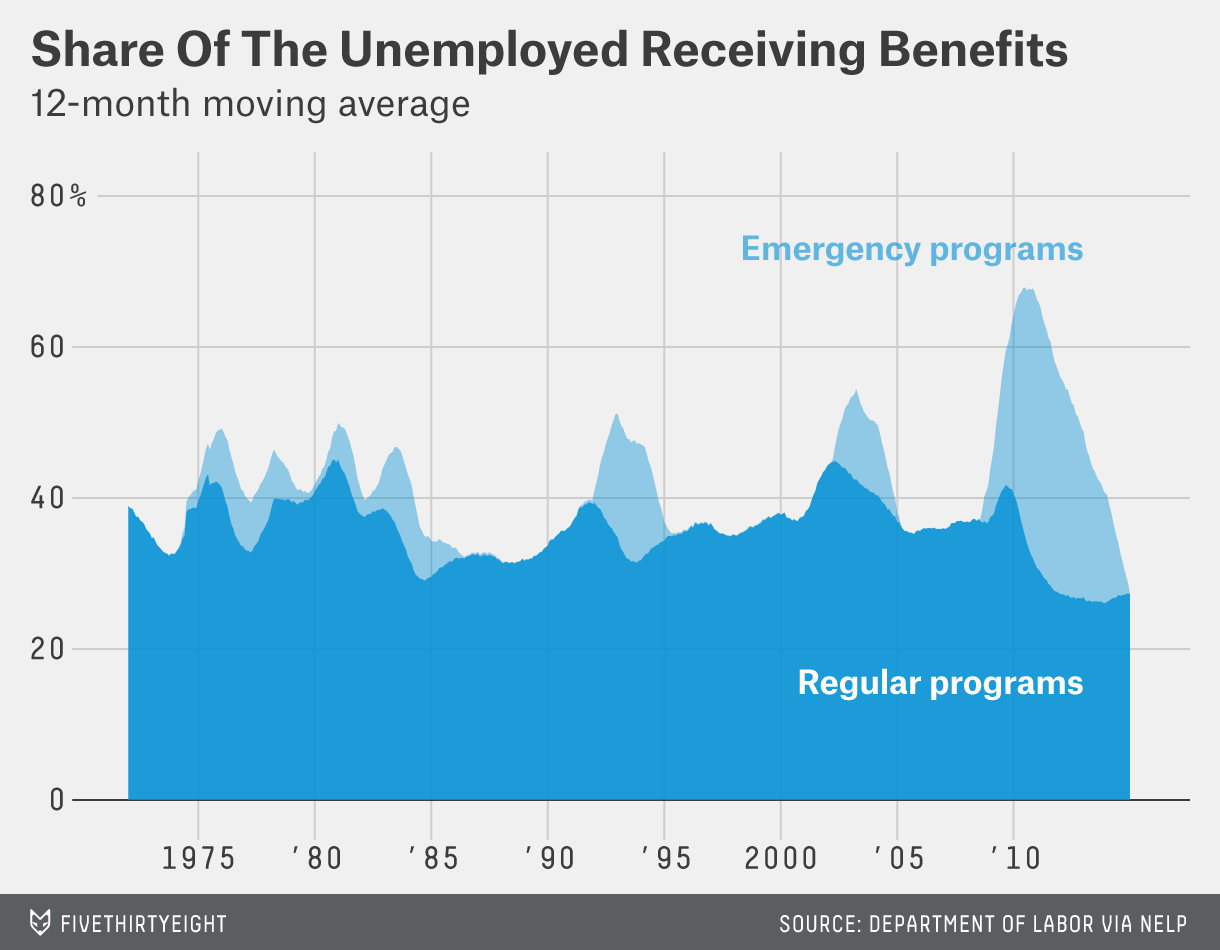 One major reason that fewer of the jobless are receiving benefits is that periods of unemployment are lasting longer but unemployment benefits aren’t. People can receive benefits for a maximum of six months in most of the country, and a growing number of states are cutting back the duration of benefits. In 2013, North Carolina made headlines by slashing the maximum number of weeks available to its residents to 20. Missouri is poised to set the bar even lower, at 13 weeks.

“The program just gets chipped away at year after year,” said Claire McKenna, who wrote the NELP report. “It’s reckless.”

Offering benefits for longer isn’t enough to deal with the increasing frequency of long-term unemployment, however, McKenna said. In the report, she proposes several ways both to prevent people from falling into long-term joblessness and to help those who do anyway. The proposals range from the mundane — boosting funding for job-training and search-assistance programs — to the more experimental, such as expanding the use of so-called work-sharing programs in which companies cut workers’ hours rather than laying them off.1

“The nature of unemployment is just different than it was,” McKenna said.

Employment is different, too. More jobs than ever require higher education or specialized certifications, but job-training efforts are a patchwork of programs that often align poorly with the benefits system. More people are working as temps, contractors or part-timers, but the unemployment system is still designed primarily for people who lose permanent, full-time jobs. And more people are working erratic and inconsistent schedules, which means their hours — and therefore their incomes — can be cut back drastically even without a formal layoff. NELP wants to expand “partial unemployment” programs that allow people to work part time while receiving benefits.

But even as NELP and its allies are pushing to expand access to benefits, others are trying to roll them back further. The unemployment system isn’t part of the solution to the long-term unemployment crisis, conservative critics say, but part of the cause. Recent studies from conservative-leaning economists have argued that the emergency unemployment benefits offered during the recession worsened the unemployment crisis. A working paper released last week by University of Oslo economist Marcus Hagedorn and two co-authors concluded that the expiration of emergency benefits at the end of 2013 led to the creation of 1.8 million jobs in the U.S. last year.

Economists have long known that unemployment benefits represent a trade-off: Laid-off workers get a cushion until they can find a new job, but because of that cushion, some of them might not look as hard for work or might be pickier about the jobs they’re willing to accept. As a result, the availability of benefits will, all else equal, tend to drive up the overall level of unemployment. Economists on the left tend to argue the effect is small and in many cases even a good thing; it’s better for a laid-off engineer to keep looking until she finds another engineering position rather than take a job as a cashier to put food on the table. Economists on the right tend to see the effect as larger and more worrisome; if that engineer waits too long to accept a job, she could end up trapped, unable to find anyone to hire her even when she is ready to lower her standards.

Last year provided something of a test of the two theories: At the end of 2013, Congress allowed the emergency unemployment program, which provided extended benefits in the wake of the recession, to expire, leading to a sudden cutoff in benefits to hundreds of thousands of workers. If extended benefits were keeping the unemployed from accepting jobs, the cutoff should have caused a sudden uptick in the rate at which they found them. That didn’t happen, as the chart below makes clear.2 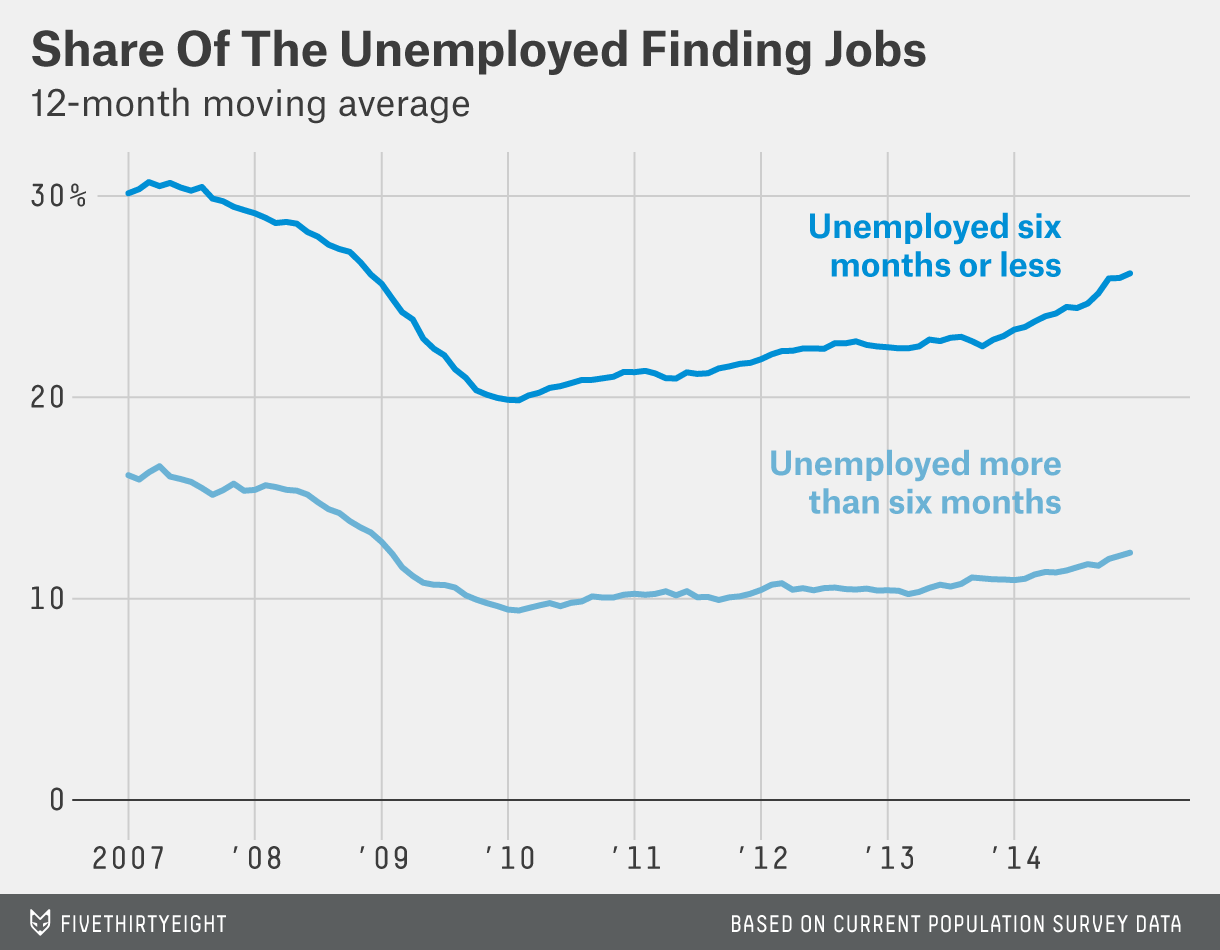 Several economists have questioned Hagedorn’s methodology and conclusions, but his work has been influential on the right as an argument against expanding benefits. A widely shared Wall Street Journal editorial last week concluded that “the extra jobless benefits reduced the incentives for businesses to create jobs and for jobless workers to fill the vacancies.” A National Review blog post highlighted the potential implications of the study: namely that 2014’s employment boom was “almost entirely due to the expiration of unemployment benefits Obama wanted to renew.”

James Sherk, an economist for the conservative Heritage Foundation, said he isn’t necessarily convinced that extended benefits had as big an effect as Hagedorn found, but he said the research should lead policymakers to consider whether expanding access to benefits could make the problem of long-term unemployment worse, not better.

“We have to recognize that this comes with an economic cost,” Sherk said. “It shouldn’t be presented as this sort of free lunch.”

But if jobless benefits have a cost, they also have a benefit beyond providing financial help to those in need: They can keep people in the labor force who might otherwise leave entirely. In a 2011 paper, University of California, Berkeley, economist Jesse Rothstein found that because workers generally have to be actively looking for a job to qualify for benefits, unemployment insurance can make people keep looking longer than they would otherwise. Some of those workers may have been merely going through the motions to keep qualifying for benefits. But others were really looking and found jobs.

Sure enough, while the expiration of emergency benefits at the end of 2013 didn’t cause any big change in job-finding rates, it did correspond with a rise in the rate at which the long-term unemployed left the labor force. 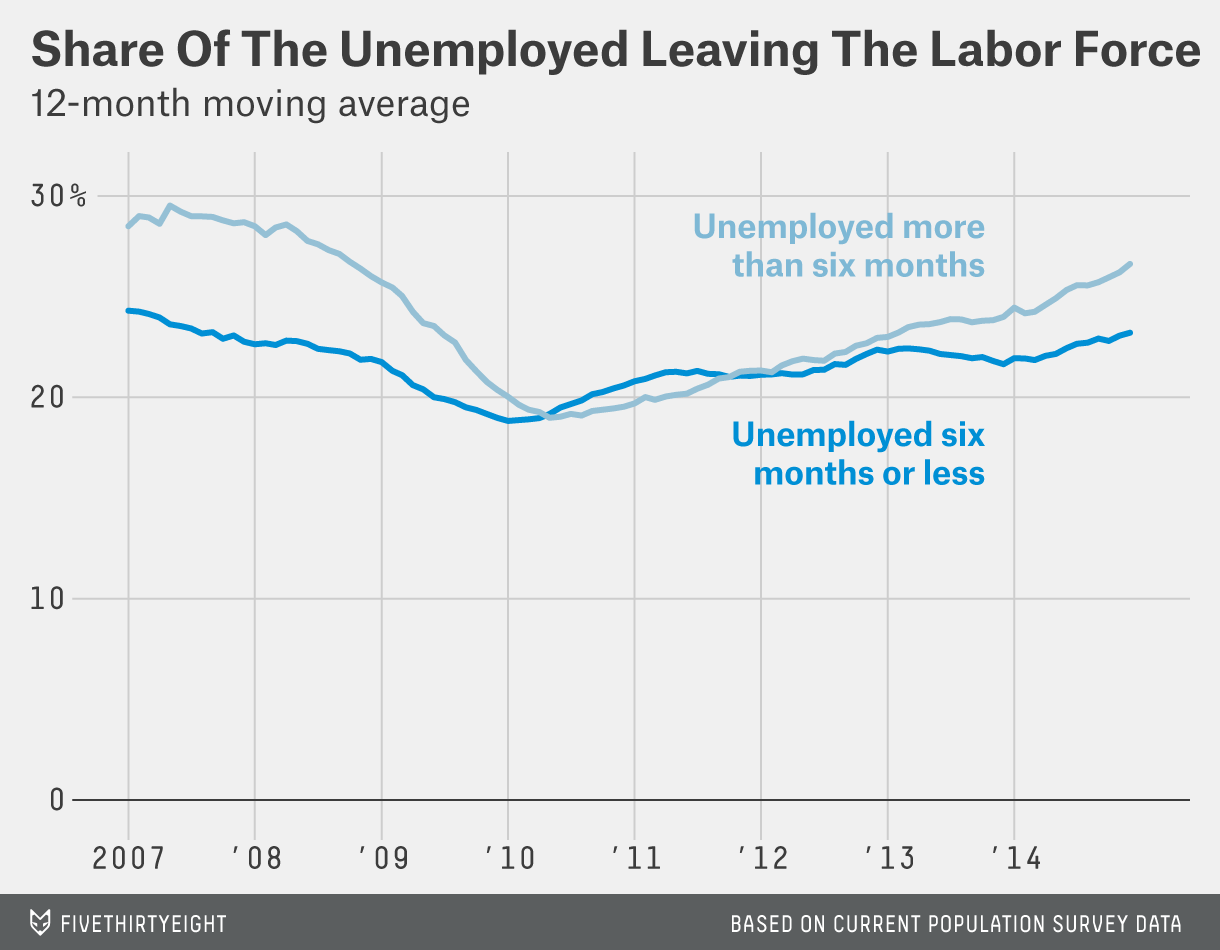 Wilson, the unemployed logistics worker in Baltimore, said benefits don’t just make it easier to survive while looking for work. They make the search itself easier. How, she asked, will she get to job interviews if her car is repossessed? Or afford a suit to wear to those interviews? Or apply to those jobs in the first place if her Internet is cut off? Wilson said that she won’t stop looking but that she understands why people do.

CORRECTION (Feb. 5, 10:25 a.m.): An earlier version of this article misrepresented a National Review blog post about the findings of Marcus Hagedorn’s study on unemployment benefits. The author of that post pointed to the study’s implications but did not endorse its findings.