In its opening campaign Monday, the U.S. women’s national team (USWNT) did not exactly look like a team that — heading into this tournament — had the best chance of winning this year’s World Cup title. It had a 68 percent chance of defeating Australia going into Monday, but when the whistle blew to signal the start of the game, the USWNT looked jittery. The team resorted to long balls and the all-too-familiar direct style of American play, completing only 73 percent of its passes in the first half (compared with a 77 percent pass-completion rate in the friendlies leading up to the World Cup).

Despite the shaky start, the Americans were up 1-0 after only 12 minutes, thanks to a nasty deflection of Megan Rapinoe’s shot off an Australian defender. The Matildas equalized in the 28th minute from a left-footed shot by captain Lisa De Vanna, and by the 60th minute, the game was still tied 1-1 — right around the time that we said U.S. fans should start sweating as a draw starts to become the most likely outcome. 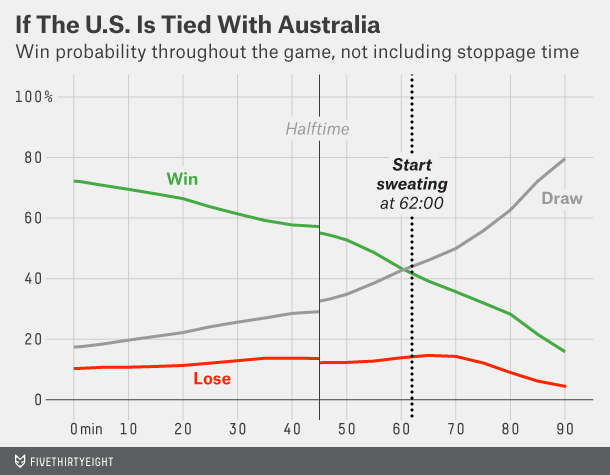 But just one minute short of our 62nd-minute sweat-marker, Christen Press scored her first World Cup goal, and the U.S. finally began to settle down, completing 80 percent of their passes in the second half. The Americans went on to win 3-1, increasing their chances of advancing from Group D to 99 percent (up from 95 percent before Monday’s game).

Germany, the other front-runner, however, opened its World Cup run with a resounding 10-0 win over the Ivory Coast (a team that had a Women’s Soccer Power Index rating of 75.5 — compared to Australia’s 88.8). But as probabilistic forecasts go, a victory that big increased Germany’s chances of winning the tournament. It is now at 31 percent, ahead of the Americans’ 28 percent.

As of this morning, Germany is now the most likely team to win the World Cup. But we’d caution against reading into this too much; we’ve yet to see how Germany fares against an opponent like Australia. That won’t happen until Thursday, when Germany faces Norway (whose WSPI rating, 88.9, is almost identical to Australia’s). Although the matchup seems similar to U.S.-Australia, the Germans are heavily favored to win — 72 percent to Norway’s 11 percent.

The U.S. and Germany aren’t likely to face each other until the semifinals, but we expect that they’ll continue to battle for the top spot in our Women’s World Cup predictions throughout this tournament. We knew these two teams would be the front-runners, but we’ll see if they continue to further distance themselves from the pack — Japan, which beat Switzerland in a meager 1-0 win on Monday night, now has a 9 percent chance of winning the tournament after starting the World Cup at 10 percent. France and Brazil stand at 7 percent and 6 percent, respectively, but these odds could change after their opening games today.