When I was asked to write a data-driven “analytical profile” of the U.S. women’s national team (USWNT) before it heads to Canada for the World Cup, I quickly realized something: There wasn’t enough data. I wasn’t that surprised; women’s sports data is severely lacking.

Sure, there are goals and assists, but anything beyond basic stats is unlikely to exist for non-World Cup matches. Looking at how a team performed four years ago with a different coach and different players isn’t very informative.

What did we learn about the USWNT during these matches — a 3-0 win against Ireland, a 5-1 victory over Mexico and an uninspiring 0-0 draw against South Korea? With the understanding that the competition and substitutions patterns will differ in Canada, and that three games does not a large sample size make, below are five takeaways from the U.S.’s friendly matches.

1. The backline looks ready defensively for the World Cup

Goalie Hope Solo barely broke a sweat in any of these games; she faced 14 shots (six on goal), made five saves and allowed one goal in 270 minutes. Only two of those shots came from inside the box.

Solo’s relative boredom is a testament to the team’s backline, which featured starters Becky Sauerbrunn, Meghan Klingenberg, Julie Johnston and Ali Krieger. Christie Rampone, who will turn 40 during the World Cup, Lori Chalupny and Kelley O’Hara also contributed as substitutes.

Overall, the U.S. allowed a total of 68 completed passes in its defensive third in the three games, including just nine into the penalty area. To put that in perspective, the USWNT completed at least 80 passes in the attacking third in each of the three games.

The one area where the defense might need to improve is set pieces. Mexico’s lone goal came off a free kick, and the only other shot the U.S. relinquished in the box was off a corner. The outside defenders will also be key attacking up the wing in Coach Jill Ellis’ 4-4-2 formation, an area that was lacking in the U.S.’s final game against South Korea. 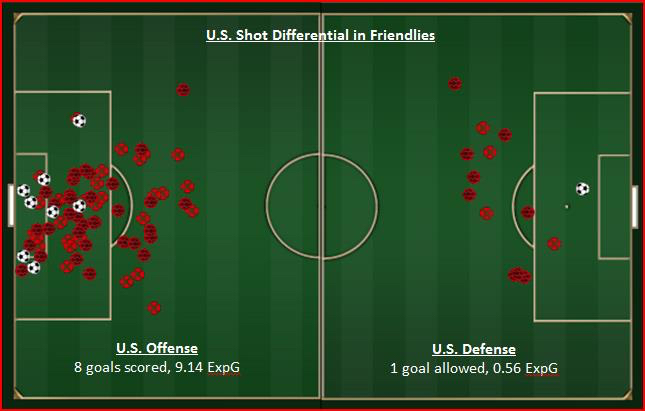 The U.S. averaged more than 23 shots per game, including an average of 16 from inside the penalty area. Both of those stats would have led all teams at the 2011 Women’s World Cup.

The good news for the U.S. is that it is creating chances; the Americans created more than 15 scoring chances per game off passes, and all seven of their non-penalty-kick goals were assisted. Most of those chances led directly to a shot from within the penalty box.

The U.S. left a number of goals on the table, however, particularly early in games. In the first 40 minutes, they took 30 shots and scored one goal. As a result, they entered halftime tied with both Mexico and South Korea.

In the second half against Mexico, the U.S. exploded for four goals, but otherwise they struggled to put the ball in the back of the net. In the other five halves combined, the U.S. scored about three fewer goals than was expected based on the type and location of their shots, according to ESPN/TruMedia’s model for predicting a team’s expected goals. Megan Rapinoe, Carli Lloyd and Christen Press were all held scoreless despite a number of opportunities from close range.

The United States was one of the most direct teams in the 2011 World Cup, and when Ellis took the job, there were fears that she would continue to focus on long forward passes. Although the U.S. played more direct than they probably wanted to against South Korea, it appears they have taken steps toward a more possession-oriented style in this small sample of games.

In the three friendlies, the U.S. had a higher possession percentage (64 percent vs. 53 percent) and pass-completion rate (77 percent vs. 70 percent) than it had in the 2011 World Cup. Besides the lower level of competition, the main reason for the higher percentage is the length of their passes; the U.S.’s average pass traveled 17.4 yards, about 4 fewer than in 2011, and their percentage of long balls (passes of 35 yards or longer) dropped significantly. For context, no team had an average pass distance shorter than 18 yards in the 2011 World Cup.

In the game in which the U.S. struggled most, against South Korea, the Americans slowed the pace and resorted to more long balls. As Ellis has noted, it is essential for the U.S. to push the tempo and play at a faster pace, especially since the tournament is played on turf.

4. They have options at forward

Alex Morgan was held out of the friendlies with a bone bruise on her knee, which gave Abby Wambach, Amy Rodriguez, Christen Press and Sydney Leroux the chance to start at forward. Morgan is expected to be healthy for the tournament, which gives Ellis choices up top.

Wambach, the international leader in goals, is always a threat to score. She led the U.S. with four goals, including two signature headers, in the friendlies. Wambach turns 35 on Tuesday, and she is likely to have a mixed role as a sub and starter at the World Cup, which opens up playing time for others.

Leroux enters the World Cup averaging the fewest minutes per goal in USWNT history. In the friendlies she led the U.S. with 16 shots, including 14 in the penalty area, but struggled to get them on target. In limited action, Rodriguez showcased her speed and could also start for the Americans. With so many options at forward, the biggest question will be whether they can develop chemistry. No two forwards completed more than seven passes to each other in the three matches combined, and at various points this year each forward missed time with injury or illness.

5. There will be no easy games in Canada

Over the next month, you will hear over and over again that the rest of the world is catching up to the top teams in women’s soccer. The U.S.’s 0-0 draw against South Korea is just one example of how the U.S. could lose to anyone if it is not on top of its game.

The U.S. is second in the FIFA World Rankings behind Germany, but in 2015 the Americans already have two ties (Iceland and South Korea), one loss (France) and two one-goal victories (England and Norway) in 10 games. Even in its seemingly “easy” victories against Ireland and Mexico, the Americans struggled to finish in the first half.

Although questions remain after the three friendlies, the U.S. heads to Canada with a “title or bust” mentality. Can the U.S. win its first World Cup since 1999? To do so, they’ll need to build on the defensive prowess they’ve shown and find a set of forwards who can convert scoring chances.